State Republican legislators are ramping up their encouragement that businesses apply the squeaky wheel approach in their bid to reopen to customers. 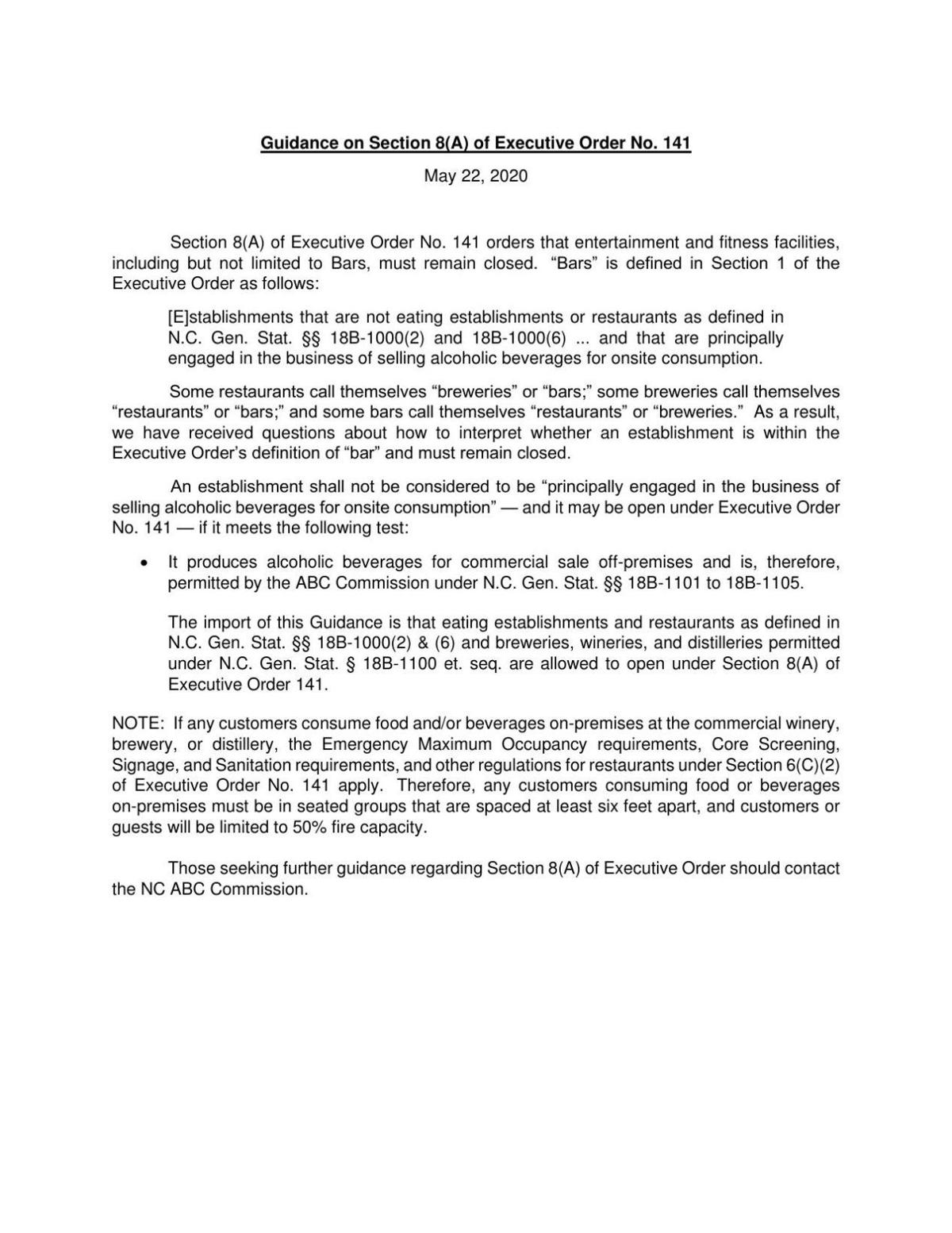 The key element in the amended order is that these establishments produce "alcoholic beverages for commercial sale off-premises and is, therefore, permitted by the ABC Commission" under the General Statutes.

For example, facilities with commercial permits to manufacture can serve, which allows Foothills Brewing to be open at both sites.

"We’d like to thank Gov. Cooper and his staff for working to provide the needed clarification to allow our industry to reopen in a safe manner," the guild said in a statement.

"As breweries are already experts in sanitation and food safety standards, we will set the example for how to conduct operations that keep our customers and our employees safe."

Republican legislators' advocacy has intensified since Cooper, a Democrat, chose Wednesday to keep closed during Phase 2 several businesses that had been projected to reopen Friday under similar 50% capacity restrictions to restaurants and personal-care businesses.

One example is Sen. Jim Perry, R-Lenoir, passing along on his Senate Twitter account a Survey Monkey link asking small businesses if they want to participate in potential legal action against the Cooper administration.

Perry released a statement Friday saying "the public has received confusing, conflicting information about everything from graduation ceremonies to brewery operations. Businesses that operate largely the same way are treated differently with no apparent rational basis."

Meanwhile, some of those still-closed business groups have noted the success of a federal lawsuit against Cooper filed by religious groups wanting more than 10 individuals allowed in an indoor gathering as well as the threat of a lawsuit involving personal-care businesses prior to the Phase 2 decision.

House speaker Tim Moore, R-Cleveland, tweeted Friday that "far too many North Carolina businesses were unexpectedly left behind in Phase 2."

"When livelihoods are at stake, certainty is paramount and five weeks is forever. I urge the governor to amend (executive order) 141 to help desperate families expecting to reopen today."

Cooper said those businesses remain closed because "the potential spread of COVID-19 can be significant there."

"It would be irresponsible to remove restrictions all at once," Cooper said. "Clearly, that's a situation that could result in a massive spike in COVID-19."

Dr. Mandy Cohen, the state's health secretary, has said that fitness centers and gyms carry higher risk for spread of the virus in part because individuals working out are breathing harder and respiratory droplets can be discharged at greater distances.

"We've got to make sure that people have confidence to go out into the economy, and we're acting to give them that confidence," Cooper said.

"We're using the data to make decisions about when it's safe to do more easing of the restrictions ... and not emotions, not politics, but science and data."

That Phase 2 is schedule to last until June 26 has drawn the ire of several GOP Council of State members.

Those members sent Cooper a letter May 12 asking why he has not sought their recommendations and approval of his stay-at-home executive orders, and the subsequent ones enacting phases 1 and 2.

State Treasurer Dale Folwell, who is recovering from a severe case of the virus, said that "when you tell businesses a month ago to spend thousands of dollars in anticipation of something, the governor needs to stand behind it.

"I appreciate more than most the focus on the sick, but we can't punish the healthy. Flattening the curve applies to commerce also."

During the meeting, Folwell told Cooper: “I’m asking you, but I’m actually begging you to do that," allowing the businesses still closed in Phase 2 to open sooner.

“Five weeks is a long time, and I know many, many businesses that are closed now will not be there in five weeks when we reopen,” Agriculture Commissioner Steve Troxler said, according to The News & Observer of Raleigh.

“If we can make decisions earlier than five weeks, then I would certainly encourage that."

Cohen said Friday the state continues to experience an overall leveling off of cases and hospitalizations over the past 14 days even as increased testing is finding new cases.

Personal care business employees are required to wear a facial mask and customers would be "strongly encouraged" to do the same.

Cooper said for weeks he believed a statewide approach to Phase 2 was appropriate.

Moore said "all businesses rely on certainty from state government to plan for challenges ahead in any economic circumstance."

"It is essential that moving forward our economic response to this pandemic be based in transparent data that considers stark contrasts in urban and rural regions of our state."

"His latest decision is likely to generate complaints from businesses and organizations originally included in Phase 2 plans, but left out of the latest reopening list. Some of these affected business owners might go to court.

"All will be left wondering why the governor does not trust them to take proper precautions to protect their customers and members."