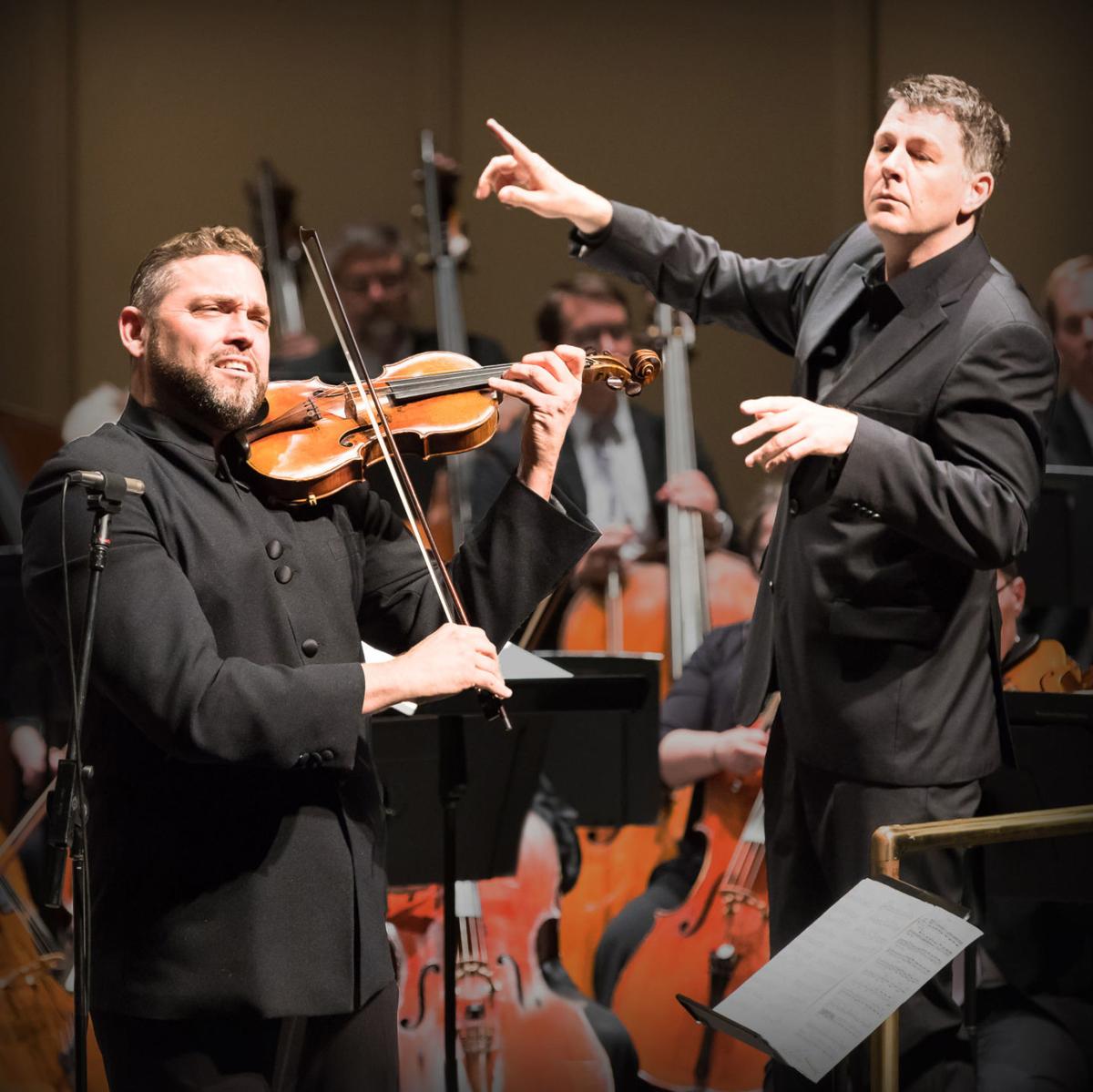 The Winston-Salem Symphony, the biggest band in town, has canceled or postponed all the concerts in its current season, but they are posting musical events online and accepting donations. Seen here at a past concert art Steven Moeckel (left), and Timothy Redmond, conducting. 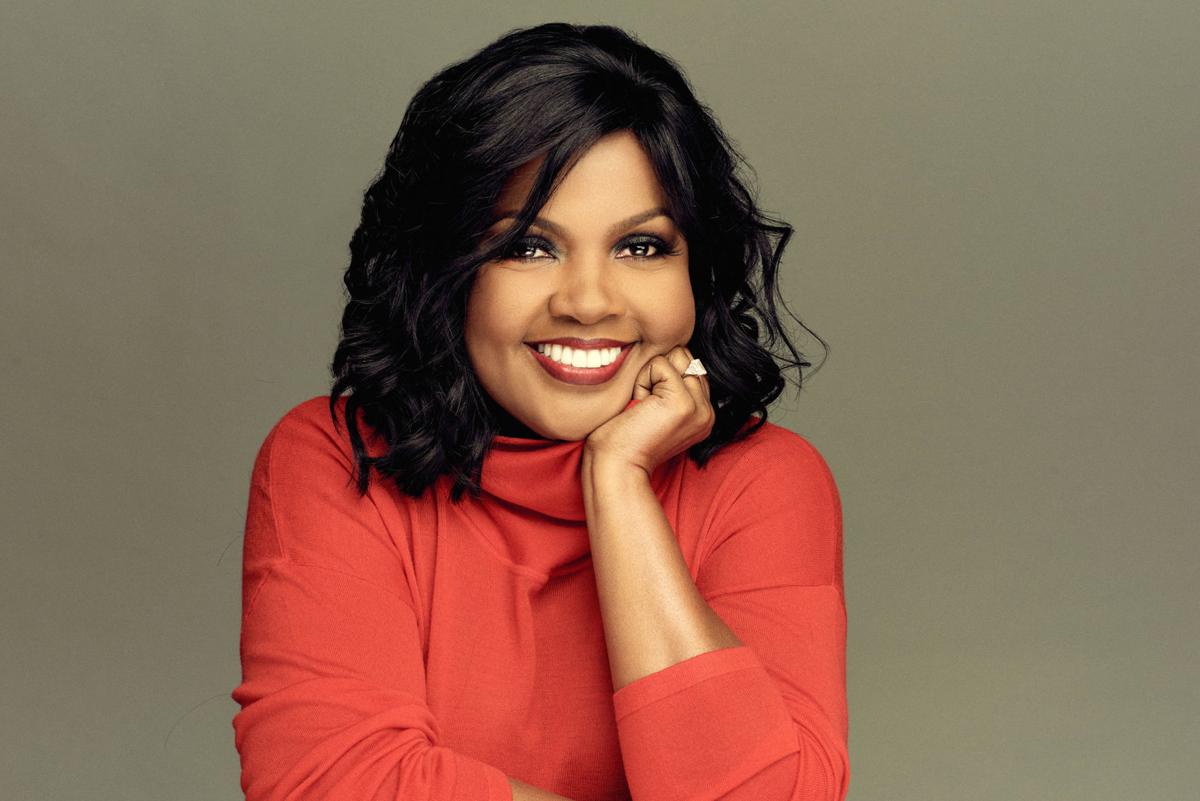 A gospel star, 007, an entire opera, and plenty of surprises: These are a few of the musical treats that audiences can expect from the Winston-Salem Symphony in its first season planned by Timothy Redmond, the new music director.

Redmond, who lives in London, started commuting to concerts here in October. On Saturday, he and other symphony officials announced the 2020-21 season to the orchestra musicians.

“The season is acknowledging my connection to the U.K. and also showing how other British musicians have come to America and created things,” Redmond said. “We’ll also be celebrating American music with composers like Charles Ives, who was the first great American symphonist, and Dan Locklair, who lives here in Winston-Salem.

“We’re looking at a global picture and making connections.”

The season will include a Classics series at the Stevens Center, a Pops series at Reynolds Auditorium, and the return of Cirque de la Symphonie to A Carolina Christmas.

Ignite Family will include a sensory-friendly concert featuring Babar the elephant, a concert that explains how the orchestra works, and one that take the audience on an adventure.

“It will be great fun for the whole family and will also give me a chance to introduce my brother to the Winston-Salem community,” Redmond said. “He will be performing with me for ‘My Great Orchestral Adventure,’ which we are bringing to you from the Royal Albert Hall in London.”

Redmond’s brother, Tom, is a horn player, a presenter of BBC Radio 3 and a music educator.

One significant change this season will be in the scheduling of the Classics series on Saturday and Sunday, instead of Sunday and Tuesday.

“We realize this is a big change and did not come to it lightly,” said E. Merritt Vale, the symphony president and chief executive. “The decision is the result of 18 months of professionally facilitated focus groups and many hours of discussions with subscribers, musicians, supporters, and artistic partners.

“By tightening the concert cycles, we will ... be able to present you with the very best guest artists. You can look forward to exciting pre- and post-concert dining experiences and social events both in the Stevens Center and in downtown Winston-Salem.”

The season will begin on Sept. 12 and 13 with an opening night gala and the return of popular guest artist Steven Moeckel, who dazzled audiences last April playing Samuel Barber’s Violin Concerto in Redmond’s audition concert.

“Moeckel is an old friend of the orchestra,” Redmond said. “And his coming appearance in September came about as a direct result of our conversations back in April.”

For this season opener Moeckel will solo on Elgar’s Concerto for Violin in B Minor, op. 61. The program, “Masquerade,” will also feature Anna Clyne’s “Masquerade,” a nod to the pleasure gardens of 18th-century London; and Haydn’s Symphony No. 104, “London,” inspired by the Austrian composer’s visits to the English capital.

On Oct. 24 and 25, the orchestra will play Locklair’s “In Memory — H.H.L.”; Beethoven’s Piano Concerto No. 5, “Emperor,” Orion Weiss, guest artist; and Bartók’s Concerto for Orchestra.

Of Locklair’s “In Memory,” Redmond said, “I just wanted to play some of his music. I listened to a lot, and I kept coming back to this piece. I was listening to it on a train trip, and I couldn’t do anything but listen.”

Mahler’s Sixth Symphony will dominate the Nov. 14 and 15 concerts. “We’ll be looking to program something epic every season,” Redmond said. “And this season, that is the Mahler.”

The final Classics concert of the season, May 22 and 23, 2021, will feature Puccini’s only comic opera, “Gianni Schicchi,” a one-act opera, in its entirety. Also on the program will be Tchaikovsky’ Francesca Da Rimini: Symphonic Fantasy After Dante.

A Carolina Christmas with Cirque de la Symphonie will be co-directed by Redmond and Karen Ni Bhroin, the new assistant conductor, Nov. 28 and 29.

Cece Winans will perform “One Night Only” Feb. 6, 2021, Ni Bhroin conducting. Winans, who has won 12 Grammy Awards, will perform her gospel hits, including “Count It All Joy,” “Depend on You,” “I’ll Take You There.”

“We really wanted to serve the whole community with our pops concerts,” said Travis Creed, general manager. “Cece is about as good as it gets in the gospel arena.”

Los Lobos who perform rock and roll, country, blues and more will perform with the orchestra on April 17, Ni Bhroin conducting. The Latin Legends will play their hits “La Bamba,” “Canion del Mariachi,” “We Belong Together” and more.

“Live and Let Die: The Music of James Bond” will conclude the season on May 8, 2021, Redmond conducting.

“Fifty years of music from James Bond movies hits every generation,” Redmond said. Themes include “Skyfall,” “Nobody Does It Better” and “Goldfinger,” performed by guest vocalists.

The season will also include a performance of Handel’s “Messiah,” a free community concert, a concert by the Symphony Chorus (including a bluegrass mass) and student orchestra performances.

“Most concerts will include some element of surprise and theatricality,” Redmond said. “It doesn’t take away from the music, but it gets you to think about the music in a different way.”

The Winston-Salem Symphony, the biggest band in town, has canceled or postponed all the concerts in its current season, but they are posting musical events online and accepting donations. Seen here at a past concert art Steven Moeckel (left), and Timothy Redmond, conducting.