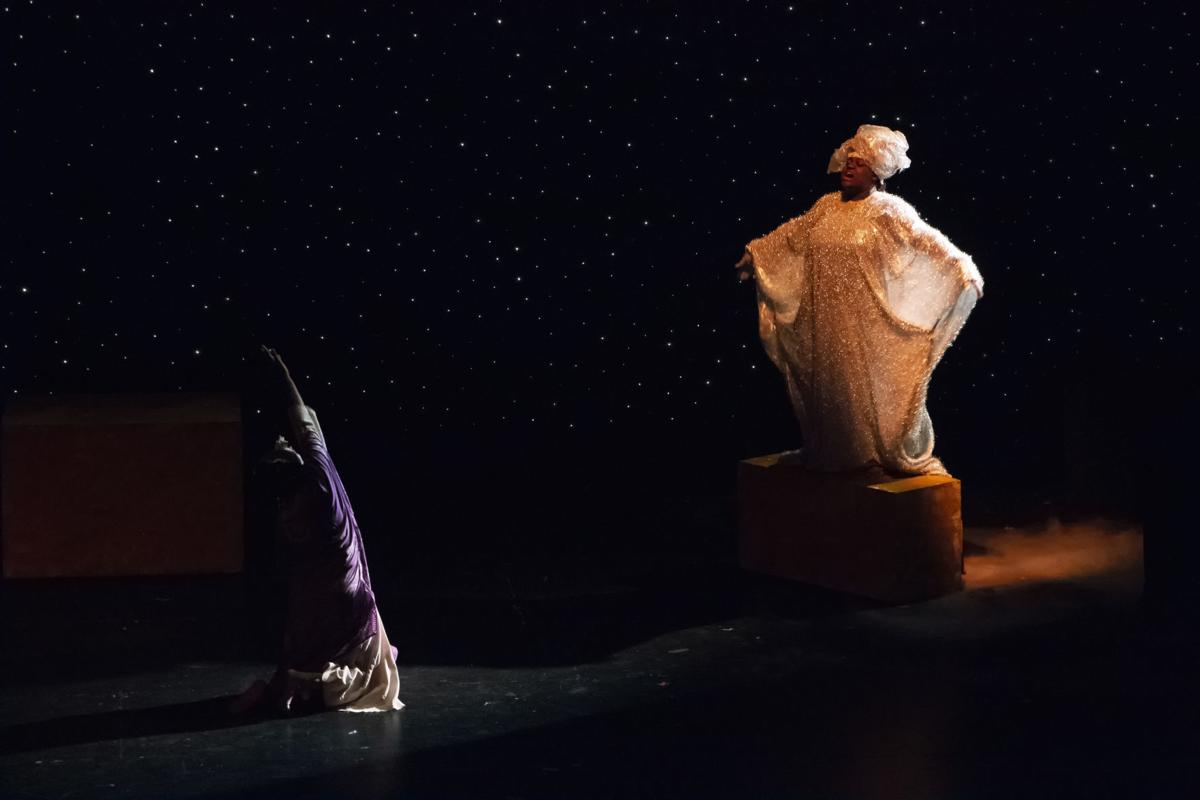 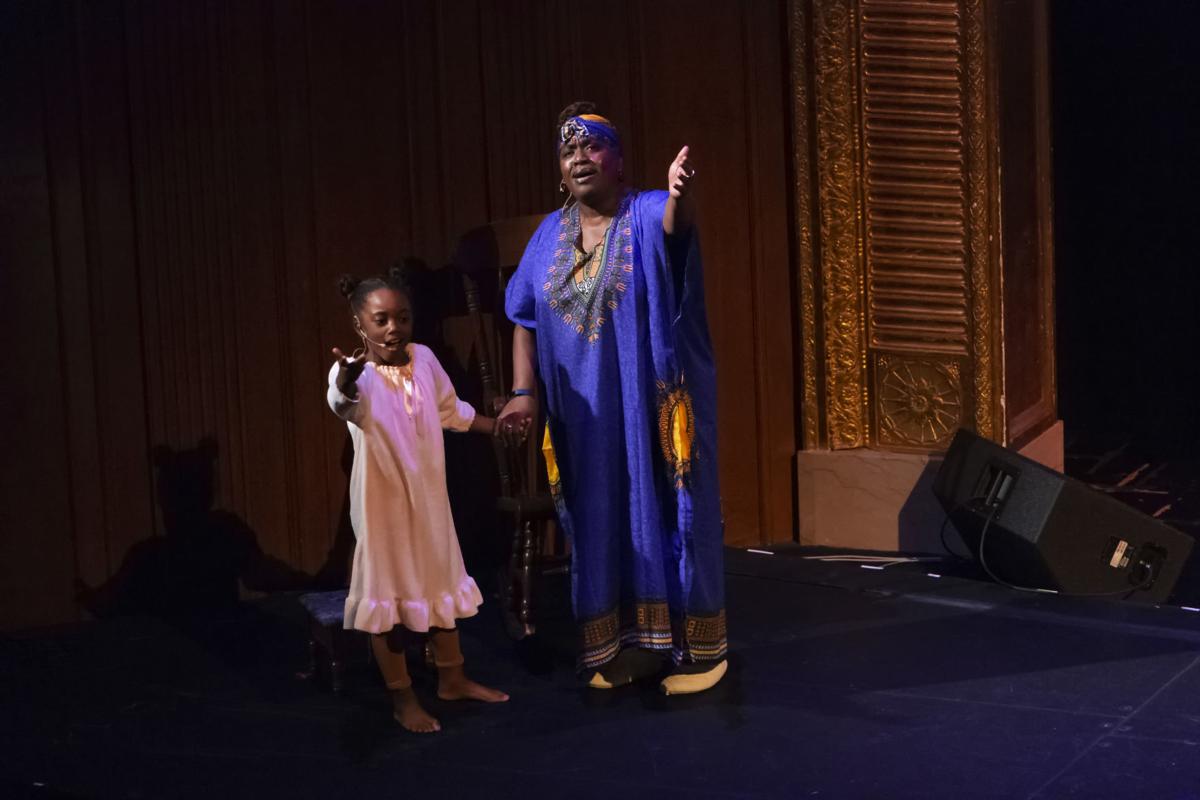 Mae Burner is the Grandmother and Ava Harris is the Grandchild in “Nativity According to the Gospels” by N.C. Black Repertory Co.

N.C. Black Repertory Co. brought a slightly new telling of an old story to the stage at Reynolds Auditorium this weekend.

After many years of producing Langston Hughes’ “Black Nativity,” this year Black Rep chose to present its own version of the story, “The Nativity According to the Gospels.” As in Hughes’ version, Jesus’ birth happens in Act 1, and Act 2 fast forwards to a present-day church service where the congregants are praising his name.

This new version was directed, written and choreographed by the incomparable Mabel P. Robinson, a Julliard graduate and veteran of several important dance companies, including Alvin Ailey American Dance Theater and Martha Graham Dance Co. Robinson also appeared on Broadway, TV and in films, including “Your Arts Too Short To Box With God,” “Hullabaoo” and “The Wiz,” respectively.

Her strengths are directing and choreographing. The large cast seamlessly moves in and out of gorgeous tableaux, and the dancers ascend to dazzling heights. Robinson choreographs brilliantly, in most cases giving each dancer work that is commensurate with his or her skills.

And what dancing. These performers appear to have springs on their feet and wings on their hearts: Wayne Jones as Joseph, Kennethia Mason as Mary, Precious Quire-McCloud as the midwife, Dezmon Woods featured in the “Sevenfold Amen,” Kevin Caesar and others as well.

Mary is depicted as a carefree young woman before the Angel appears to her, and Joseph as a young man desperate to protect his family. These little touches make the oft-told story intensely personal.

The talent of the singers is also splendid: Bethany Heath as the Angel, Lazarus LeGrant, Cora Sharice Chambers and Carlotta Fleming, to name only a few. Phillip Lynch, with his sonorous tones and perfect diction, is an elegant and commanding narrator.

The show begins with a slow burn from the nearly flawless orchestra, playing a mellow but intriguing overture. Led, as they have been for many years by Tony D. Gillion, the pit musicians sounded great and deserve mention: Gillion on keyboards, Courtney Butler on bass, Latika Douthit on flute, Frank Cauthen III on trap set; Oseiku DañEl and Chi Sharpe on African drums.

Then we were introduced to some new characters: Mae Burner as Grandmother and Ava Harris as Grandchild. Grandchild is a spunky little one, and Miss Harris has enough body confidence for 10 children. I sincerely pray she keeps it. She’s one to watch. Johann Pate as Grandson has a sweet solo in Act 2.

Director Robinson has kept the West African-style costumes designed by Frenchy LaVerne Slade. In Act 1, the desert-adaptive costumes flow and swing with the dancers’ movements. In Act 2, the churchgoers wear golden turbans and jewel-toned tunics. It is a visual feast. Arthur Reese did the scenic and lighting design.

There are some wonderful songs in Act 2, notably “Said I Wasn’t Gonna Tell Nobody,” led by LeGrant and Felecia Piggott-Long, who also did signing for the hearing impaired throughout show; and “Jesus Is the Reason,” a hip-hop tinged piece featuring the younger members of the cast.

But that half of the show needed more modulation; maybe take the energy down a tick from time to time before revving it up again, and consider cutting 20-30 minutes. Also, there were a few incidents of mics cutting out on featured performers. Overall, though, the sound was clear and balanced, even thrilling.

In a show that had many emotional highs, the most affecting piece for me was “Po Mary on the Road” and “Po Joseph on the Road.” The urgent music and the boundlessly energetic dancing conjure the anxiety of searching in vain for shelter on a cold, dark night; the sadness of being far from one’s home; the yearning for sanctuary.

In this way, Robinson achieves her stated intention: She shows the importance of extended family. In the case of Mary, Joseph and Jesus; Grandmother, Grandson and Grandchild, it does, indeed, take a village. It takes all of us.

What: N.C. Black Repertory Co. presents “Nativity According to the Gospels.”

Length: 2.5  hours, including one 15-minute intermission

HIGH POINT — A 25-year-old woman was charged with second-degree murder after authorities say she fatally stabbed another woman Thursday night, according to a news release from High Point Police.

Mae Burner is the Grandmother and Ava Harris is the Grandchild in “Nativity According to the Gospels” by N.C. Black Repertory Co.