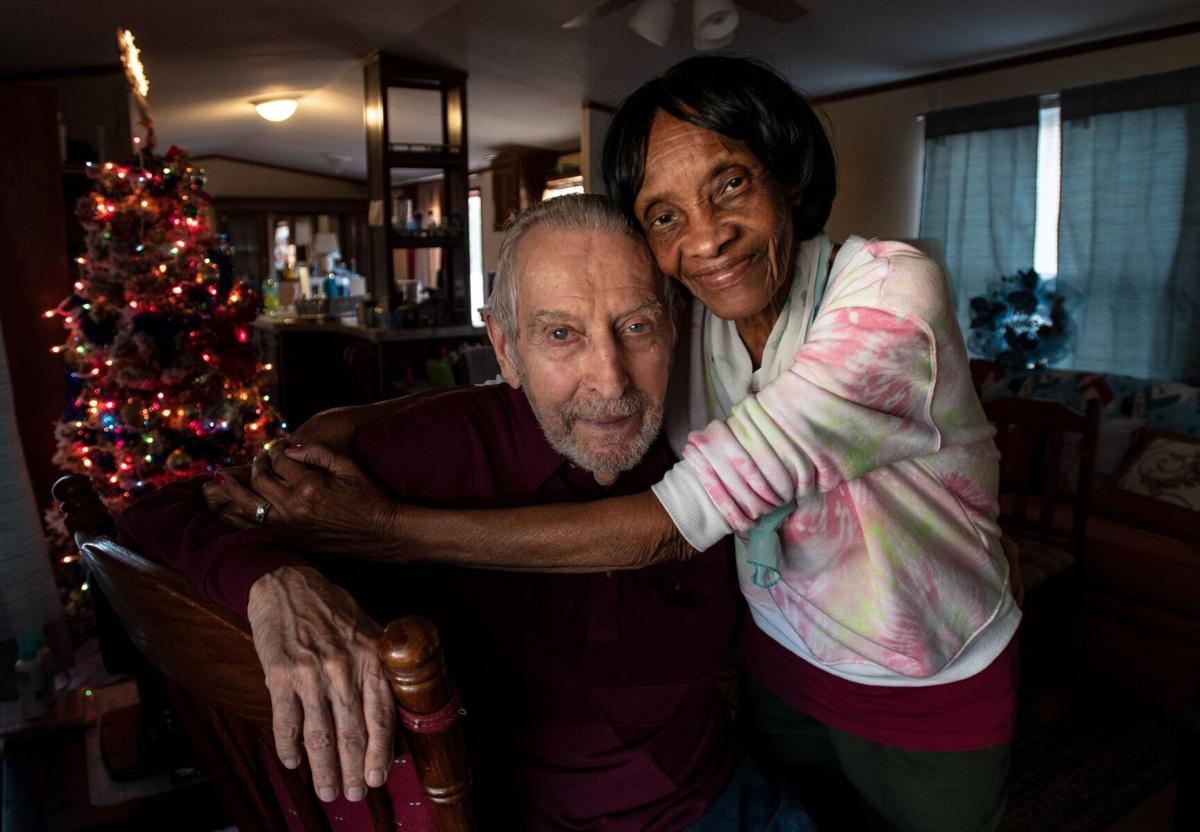 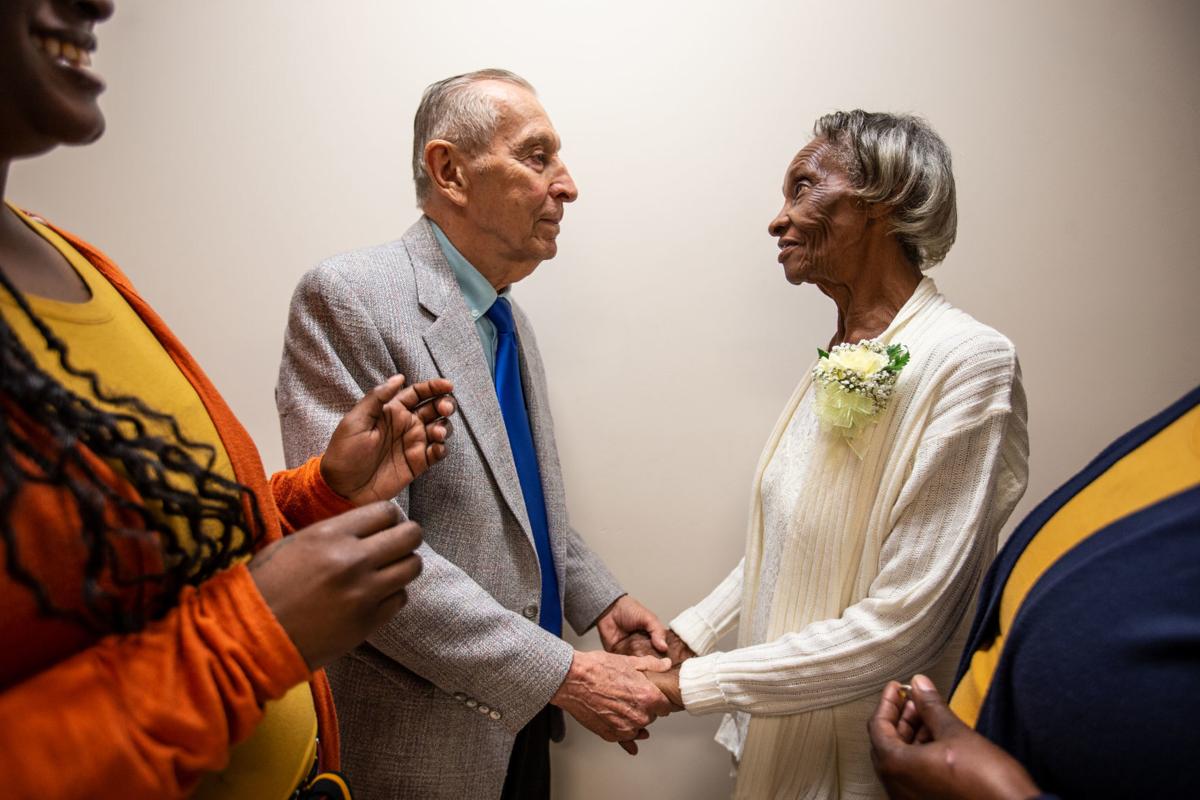 GREENSBORO —  There's been a new addition to the family since Bill and Shirley Shaffstall said "I do" two years ago.

They call him Tiger.

"He's everywhere," she said of the striped gray cat now lazily looking at Bill as he places a train decorated with lights on tracks that encircle the base of their Christmas tree.

Since meeting and marrying two years ago, the two octogenarians finish each other's sentences and thoughts.

Before a judge, in a nondescript room at the Guilford County magistrate's office for privacy, the two promised to take care of each other.

That took on a new meaning for Shirley this summer when Bill took her camping for the first time. He used to go a lot when he owned a camper. They bought a tent so she could get the feel of sleeping under the stars.

But it brought more adventure than they expected.

He had been sitting on a bench when he noticed something on his back.

A tick. A large one.

While squinting her eye, she pulled it off.

He ended up in the emergency room with her by his side.

"I wouldn't have wanted to go through that with anybody else," he said with a laugh. "I'm thankful we found each other."

The two — he was 83 and she 82 at the time — had known each other for just three months when Bill proposed. It was at the end of spring 2019 when Bill noticed Shirley in front of the mailboxes at the entrance to their mobile home park.

"I talk to just about everybody,” Shirley would later say, with a wink and a smile.

A widower and former Army member, Bill had moved from his native Ohio to Winston-Salem to be with his daughter and grandchildren. A few years earlier, he had lost his high school sweetheart and wife of 54 years.

His daughter eventually moved from Winston-Salem to Greensboro and settled into a quiet mobile home park with tidy yards. She used to talk about a friendly woman who the neighborhood kids called "Grandma."

Shirley had retired from the hospitality department at Moses Cone Hospital. She grew up in Greenville, S.C., and moved to Richmond, Va., to be closer to her ailing mother. It was there she met her first husband. They later followed family to Greensboro.

She became a widow in 2017 after 32 years of marriage. Her husband spent the last decade or so of his life confined to a nursing home after a stroke.

Bill and Shirley realized they lived a few houses and a turn down a street away from each other.

Soon, he was joining her on walks when she came past his yard.

She dropped off plates of food.

One day they hugged.

"I knew she was the one person I wanted to spend the rest of my life with," Bill said.

They bonded over Randy Travis concerts on DVD.

One day in early September, they were sitting in his living room.

She sat there, speechless for once.

Now, they'll be together forever.

"I know he cares for me," Shirley said. "I like that and I feel the same way."

Some people told them to take their time.

They didn't listen. Not to them, anyway.

"I talked to the Lord about it," Shirley explained. "I felt like God had sent me to him."

They picked out wedding rings at Walmart.

After Bill paid for them, the couple sat in the parking lot with the bag on the seat between them.

"I said, 'It’s typical when you get engaged to put on the ring,'" he recalled telling her. Then he slipped it on her finger.

She stood misty-eyed before that judge on Oct. 19, in the off-white dress her granddaughter helped her pick out from Roses, the department store.

Bill chose a blazer Shirley liked, and church slacks that were hanging in the closet.

They decided on marrying before the justice of the peace because the preacher they wanted was busy. Besides, they were committed to the date.

There was a long pause and then laughter when the judge asked Bill if he took Shirley as his bride and he hadn’t realized it was time to speak up because he was gazing into her eyes.

Her "I do" came with tears.

"William," the judge said to him, "you may now kiss your bride."

Which he did to the delight of those surrounding them.

It was on to the Waffle House for breakfast.

Later, a reception in a private room at the Golden Corral on Lawndale with friends and family.

With an overnight bag in the back of their car, they left for their honeymoon.

Since then, they've settled into a routine of Walmart, where Shirley socializes as she shops — "You don't have to tell on me," she laughingly whispers her husband's way — and church every Sunday.

And the doctor's office.

"Starting the day after, we've had a lot of those," Bill said of the visits.

The trips have all been mostly minor.

Shirley said she's found the perfect mate for her. She jokes with Bill as married couples do — "He drives way too fast," she said, mimicking his hands on an imaginary steering wheel.

"You can marry the wrong person," Shirley said. "I would say I'm blessed."

Bill says nothing has changed the past two years. Occasionally, people ask about the couple and he replies with a laugh.

"I keep telling people we are just two old people taking care of each other," he said.

A bizarre twist! Cotton candy was invented by who?

A bizarre twist! Cotton candy was invented by who?