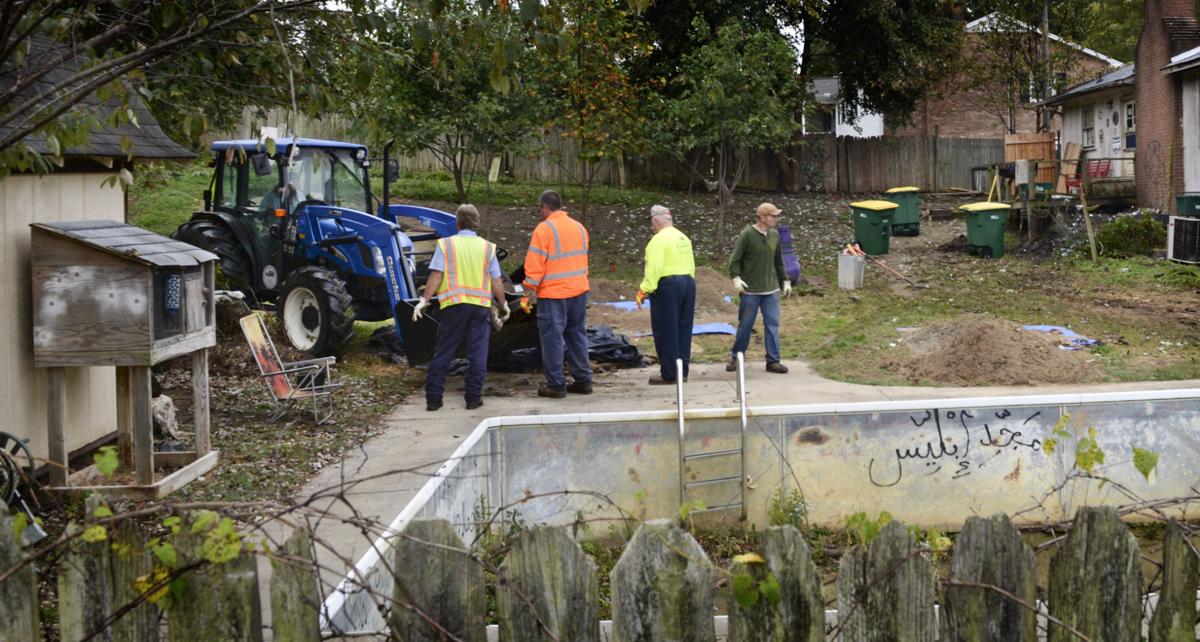 A front-end loader and workers from the Clemmons public works department cleared debris from the back yard at 2749 Knob Hill Drive, Thursday, Oct. 16, 2014, where the remains of Joshua Fredrick Wetzler and Tommy Dean Welch, missing since 2009, were discovered last week. 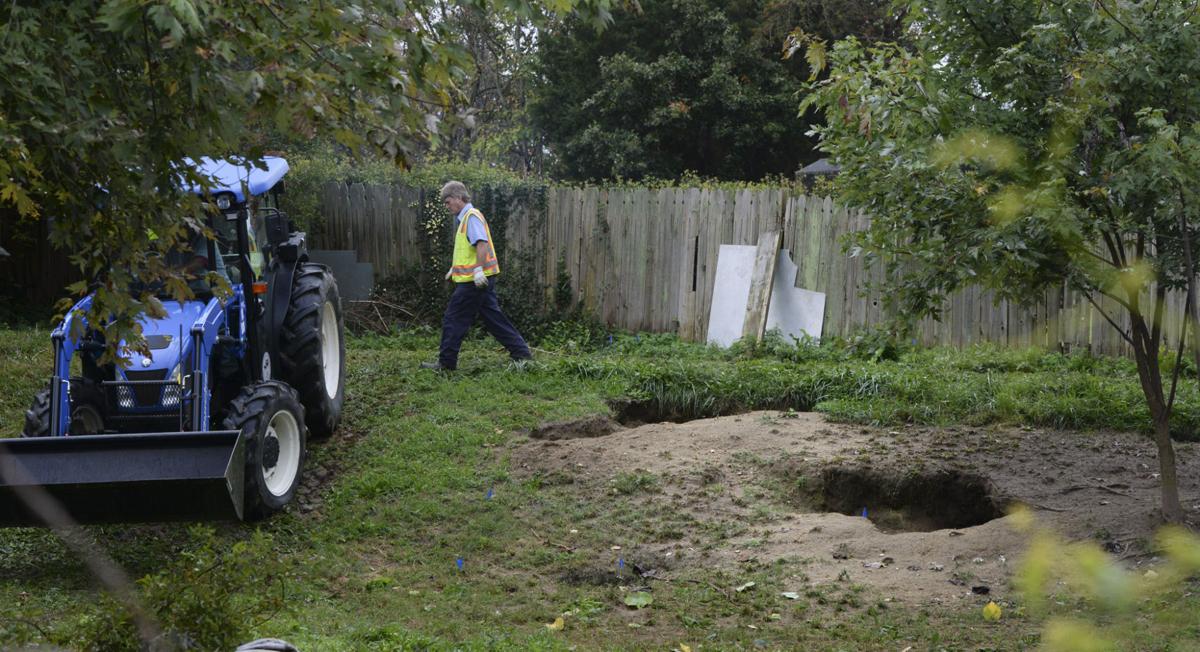 More details continue to emerge about the lives of Pazuzu Algarad and Amber Burch, the two people arrested on Oct. 5 and charged in the murder and burial of two men at their Clemmons home.

According to a friend of Burch, Algarad’s girlfriend, he claimed to get a high from eating the “still-beating heart” of a sacrificial animal and bragged openly about having killed two prostitutes.

That friend visited the house in 2009 where the couple lived on Knob Hill Drive in Clemmons. Algarad and Burch are each charged with murder in connection with the deaths of two men whose remains were found recently in the couple’s backyard.

As a front-end loader scooped up tires, lawn mowers and other debris from the couple’s yard Thursday morning, Burch’s friend told about conditions inside the house that were so bad she thought she might vomit.

“It reeked of feces and urine,” said the friend, whose identity was confirmed, but who spoke with the Journal only on condition that her name not be used. Her identity has been confirmed with other people the Journal has interviewed in the last two weeks. “You didn’t get a good feeling walking into that house at all. It was dark. It was like a lifeless house. It was creepy.”

When the friend first arrived to visit Burch in 2009, Algarad was completely naked and never put on any clothes during the visit. The excrement on the floor might have been both animal and human, the friend said.

“He was on all kinds of drugs and drink when I got there,” she said. “I’m pretty sure I witnessed him peeing in the corner.” The friend said Algarad’s behavior was “very sexual, very provocative.”

“He commented on a number of occasions that he was trying to get in my pants,” the friend said, adding that Burch “was all for it. I made it clear that that it was not going to happen.”

Burch’s friend said she was only a teenager when she visited the couple’s house on several occasions during those months in 2009, and that the atmosphere was one of partying, loud metal music and drugs.

“At that time I was experimenting with different drugs, and all I knew was, ‘Hey, it’s a party.’ Granted, it took a lot not to throw everything back up.” The one night she actually spent the night, the friend said, “I was woke up numerous times with Pazuzu over me trying to mess with me.”

Burch told her friend that she and Algarad had met through a mutual friend.

“She was living with him for a long time, and she kept telling me about this really weird but super-great guy that she was with. He wasn’t the average person that she would be with. Amber was always a very clean-cut person. After about a month, she quit taking showers. She started to dreadlock her hair. She filed her teeth down to points. She quit shaving. It was not Amber at all.”

Walking into the house, trying not to step in excrement, Burch’s friend saw Satanic sayings written on the walls and filthy dishes piled up with “bugs crawling all over them.”

Algarad bragged about killing two prostitutes, the friend said, adding that neither she nor Burch really believed he had done it.

“The facial tattoos, the Satanism, I never gave it much thought,” the friend said. “I figured he was just trying to psych everybody out.”

The friend said she never saw anyone from the Winston-Salem area at the couple’s house when she was there, and doesn’t know anything about Joshua Wetzler and Tommy Dean Welch, who have been identified as the two men buried in the backyard. She said she and her friends have been wondering about the victims — who they were, and how they might have ended up at the house.

Authorities have not said how the two men were killed or what connection they had to Algarad and Burch. Arrest warrants say Algarad, who is 35, killed Wetzler in July 2009 and that Burch, who is 24, helped him bury the body. In October 2009, arrest warrants say, Burch killed Welch and Algarad helped with the burial.

Judge David Hall of Forsyth County issued orders on Wednesday sealing search warrants carried out at the house Oct. 4 and Oct. 5. The judge said that revealing details of the deaths would jeopardize the ongoing investigation that law-enforcement authorities are carrying out.

Another search warrant had been executed at the house and sealed on Feb. 26, 2010. About the same time, Stacey Carter, Wetzler’s former girlfriend, had told police that she had heard a rumor that Wetzler was buried at the place.

Chief Brad Stanley of the Forsyth County Sheriff’s Office would not comment Thursday about whether any prostitute deaths are being investigated. Nor would Stanley comment on a recent claim by someone that authorities had previously come by the Knob Hill house to check out a report they had supposedly received that Algarad was a terrorist.

“He made it a point to mention all the time that once a month he has to sacrifice … a small rabbit or small animal,” the friend said. “He would describe the animal and bathing in or drinking the blood. He would get a drug-like high from eating the still-beating heart. I thought he was feeding me a load of crap. I thought it was a big show, one of those shock factors. He would say something along the lines of, ‘We sacrificed it and had sex in its blood.’ I slept there on a number of occasions and I never worried about him slicing my throat or anything.”

Burch’s friends had nicknamed her Bubbles because of her bright personality, the friend said, but the woman she saw in Winston-Salem was not the Amber she had known.

“She was the type of girl that it didn’t matter what was going on that was bad, it was her personal goal to put a smile on her friends’ faces,” the friend said.

“I asked her, ‘What the hell are you doing? This isn’t you at all.’ All she could tell me was that she loved him,” the friend said. “She told me he had been shooting up heroin and cocaine and smoking crack. She got pregnant. She says she miscarried from stress. I think it was the drugs, but I was not a doctor. She went off the deep end.”

A 2010 psychiatric report on Algarad mentioned his expressed need to perform animal sacrifices. The report diagnosed him as having a panic disorder and agoraphobia — an abnormal fear of being in open places. Burch’s friend said that Algarad never went outside any time she was there.

“Even if he had to go to the store he would send Amber to go,” the friend said. “He would not leave his house.”

Burch’s friend said she never saw any guns in the house.

“She was really quiet like she was scared to say anything,” the friend said.

The change in Burch is what “blows my mind,” the friend said.

“She couldn’t handle someone spanking a dog for peeing on the floor,” she said. “She was into peace, love and happiness. She was a hippie. She wasn’t a devil-worshipping Satanist killing machine that everyone is saying she is.”

Investigators return to Clemmons house where bodies were found

CLEMMONS — Forsyth County Sheriff’s deputies, CSI units and the State Bureau of Investigation were back Friday morning at the Knob Hill Drive …

A front-end loader and workers from the Clemmons public works department cleared debris from the back yard at 2749 Knob Hill Drive, Thursday, Oct. 16, 2014, where the remains of Joshua Fredrick Wetzler and Tommy Dean Welch, missing since 2009, were discovered last week.