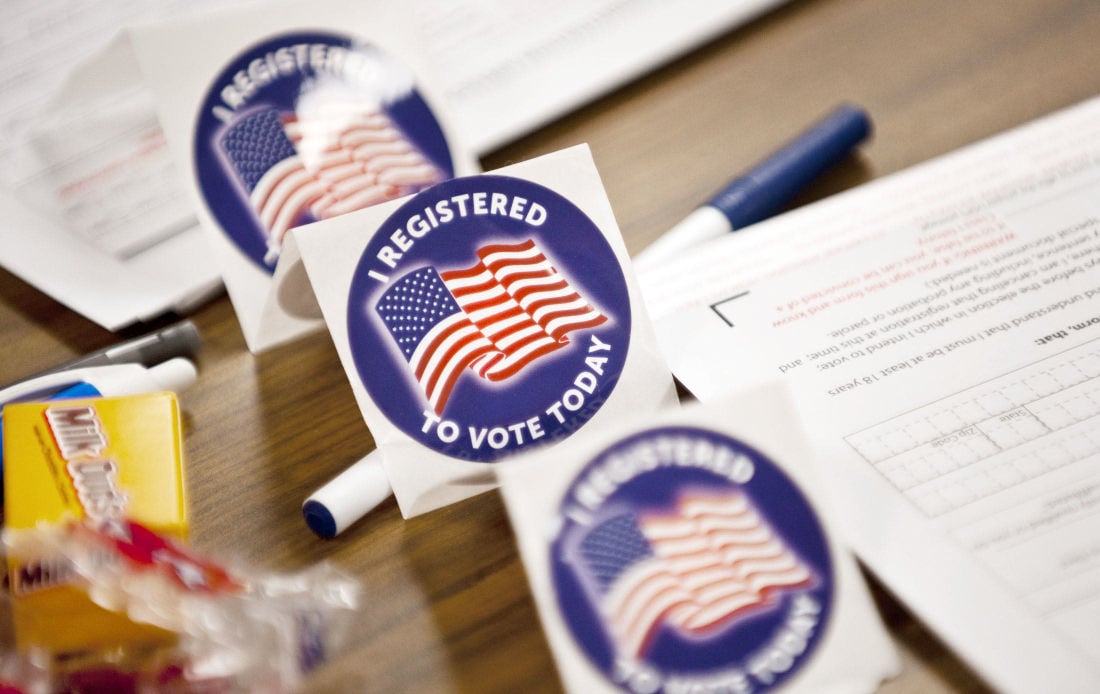 Volunteers with Democracy N.C. gave out stickers and candy to students at West Forsyth High School who registered or pre-registered to vote in 2012. 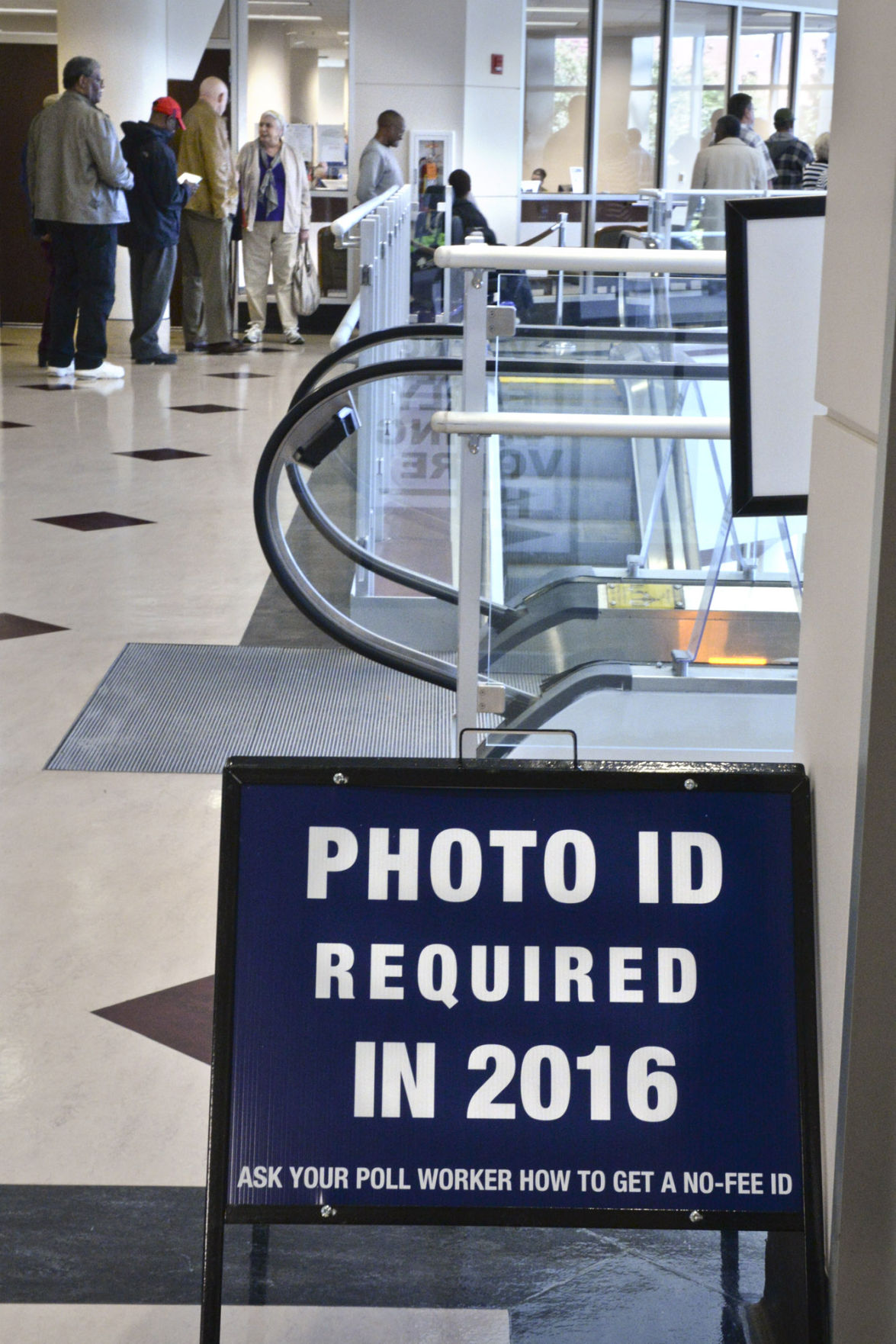 Lines formed early for the first day of early voting at the Forsyth County Government Center in Winston-Salem in October.

Across the United States, eligible residents have the opportunity to join voter rolls and vote, but they don’t all have the same options or ease of access.

“There are certain federal requirements that limit state discretion,” said John Dinan, a political science professor at Wake Forest University. “For instance, states cannot set a registration closing deadline of greater than 30 days before an election. But for the most part, states have significant discretion in how they provide for voting to take place.”

For example, about two-thirds of the states allow in-person early voting, but the early voting periods range anywhere from four to 45 days. About two-thirds of states currently require voters to present identification of some kind at the polls, but they vary greatly in what kind of documents they require and what they do if a person doesn’t provide it.

“Some states have certainly made it easier than others,” said Jason Husser, assistant professor of political science at Elon University.

In 2013, the North Carolina General Assembly passed a sweeping election law that eliminated same-day voter registration, reduced early voting from 17 days to 10, and added a photo ID requirement, among other changes.

The N.C. NAACP, the League of Women Voters, the U.S. Department of Justice and others sued North Carolina and Gov. Pat McCrory over the law. The law went on trial last week in federal court in Winston-Salem.

Plaintiffs in the lawsuit contend the law is racially discriminatory and places unfair burdens on blacks and Hispanics, the poor and the young. Attorneys for the state and McCrory deny the allegation and argue that the law gives everyone an equal opportunity to vote.

North Carolina’s law has drawn a lot of attention because of the scope of the changes, as well as the timing of it.

Republican legislators pushed an expanded elections bill through a month after the U.S. Supreme Court invalidated part of the Voting Rights Act of 1965 that had required certain states and communities to seek federal approval to change election laws.

“If the federal courts give the green light to North Carolina to roll back its voting rules in this way, then I expect we’ll see some other states with Republican legislatures following suit,” said Rick Hasen, an elections law expert at the University of California, Irvine School of Law.

Voter ID laws have been a hot topic of debate nationally, with some saying that a voter ID is unnecessary and others arguing that it prevents fraud.

The Brennan Center for Justice at the New York University School of Law, which tracks election laws, reported in June 2014 that 13 states had passed more restrictive voter ID laws between 2011 and 2014, including North Carolina.

About two-thirds of states require an ID of some kind.

“But this is just the start of the variation among states in this regard,” Dinan said, “because there are varying levels of strictness in state ID requirements, with some states allowing a nonphoto ID and some states requiring a photo ID. And then there are additional decisions to be made about what forms of photo ID are permissible and what is the procedure for when someone shows up at the polls without a photo ID.”

According to the National Conference of State Legislatures, a bipartisan organization which tracks legislation nationally, 34 states as of March 24 had passed laws requiring voters to show some form of identification at the polls. Laws in 32 states were in force. Pennsylvania’s law was struck down, and North Carolina’s photo ID requirement does not go into effect until 2016.

In 2014, 21 states had nonstrict voter ID requirements, and 10 had strict requirements, not counting states like North Carolina whose law had not gone into effect. Fifteen of the states asked for a photo ID and 16 also accepted a nonphoto ID. Eight of the states — Georgia, Indiana, Kansas, Mississippi, Tennessee, Texas, Virginia and Wisconsin — had strict photo ID laws, but some were in limbo because of litigation.

As the National Conference of State Legislatures defines it, nonstrict laws mean “at least some voters without acceptable identification have an option to cast a ballot that will be counted without further action on the part of the voter.” Under a “strict” law, “voters without acceptable identification must vote on a provisional ballot and also take additional steps after Election Day for it to be counted.”

The North Carolina legislature voted last month to soften its photo ID mandate. Voters who claim that a “reasonable impediment” prevented them from getting a qualified ID will be able to sign a declaration form and provide their birth date and the last four digits of their Social Security number, or show a voter registration card or other acceptable document.

Because of the change, the voter ID provision is not part of the federal hearing in Winston-Salem.

About two-thirds of the states, including North Carolina, allow some form of in-person early voting.

According to the National Conference of State Legislatures, there were 33 states as of Feb. 11 that allowed qualified voters to cast a ballot in person during a period before Election Day. Fourteen states — all in the eastern half of the nation — did not offer early voting and required an excuse to request an absentee ballot.

Three states — Colorado, Oregon and Washington — conduct all elections by mail, where a ballot is automatically mailed to every registered voter. At least 19 other states allowed some elections to be conducted by mail.

Early voting periods range from four days to 45 days in length, and the average across the 33 states is 19 days, the National Conference of State Legislators said.

North Carolina’s early voting period is 10 days long under the new law. It used to be 17 days, but legislators shortened it by a week while requiring the same number of hours to be offered. Now the early voting period begins the second Thursday before an election and ends at 1 p.m. the Saturday before Election Day.

All states will mail absentee ballots to certain voters who request one, but in 20 states, an excuse is required. North Carolina does not require an excuse.

Several states permit voters to join a permanent absentee voting list, where a voter will receive an absentee ballot automatically for all future elections. As of last year, the list included Arizona, California, Hawaii, Montana, New Jersey and Utah. At least nine other states offered the option to a limited number of voters.

In North Carolina, the deadline to register to vote is 25 days before the date of an election. In 2013, the legislature voted to end the same-day registration option, which allowed voters to register and vote on the same day during early voting. That is part of the current trial in U.S. District Court in Winston-Salem.

According to the National Conference of State Legislatures, 11 states as of June 2 allowed residents to register and vote on Election Day: Colorado, Connecticut, Idaho, Illinois, Iowa, Maine, Minnesota, Montana, New Hampshire, Wisconsin and Wyoming. California, Hawaii and Vermont enacted same-day registration that had not been implemented. Utah also enacted a pilot project in 2014 for Election Day registration, to run through 2016.

In most other states, voters have to register before Election Day, and most deadlines fall between eight to 30 days before an election, the organization said.

Jonathan Brater, counsel in the Democracy Program at the Brennan Center for Justice, said, “There are states that have moved to modernize voter registration with things like online voter registration, which has been popular in both Republican- and Democratic-controlled states.”

North Carolina does not offer online voter registration, but 21 states did as of July 1, the National Conference of State Legislatures said. Another six states have authorized online voter registration but have not implemented it. Florida, Oklahoma and New Mexico are the most recent states to authorize it. These systems supplement paper registration by allowing residents to submit their applications online. In most states, the applicants typically must have a corresponding record in the database of the state’s motor vehicle agency.

In March, Oregon became the first state to vote to automatically register eligible citizens who have a driver’s license. The Brennan Center for Justice reported that 14 additional states soon after introduced legislation for automatic registration.

By about noon, a three-week trial on North Carolina’s election law — one of the most sweeping changes in voting practices in the country since…

Volunteers with Democracy N.C. gave out stickers and candy to students at West Forsyth High School who registered or pre-registered to vote in 2012.

Lines formed early for the first day of early voting at the Forsyth County Government Center in Winston-Salem in October.