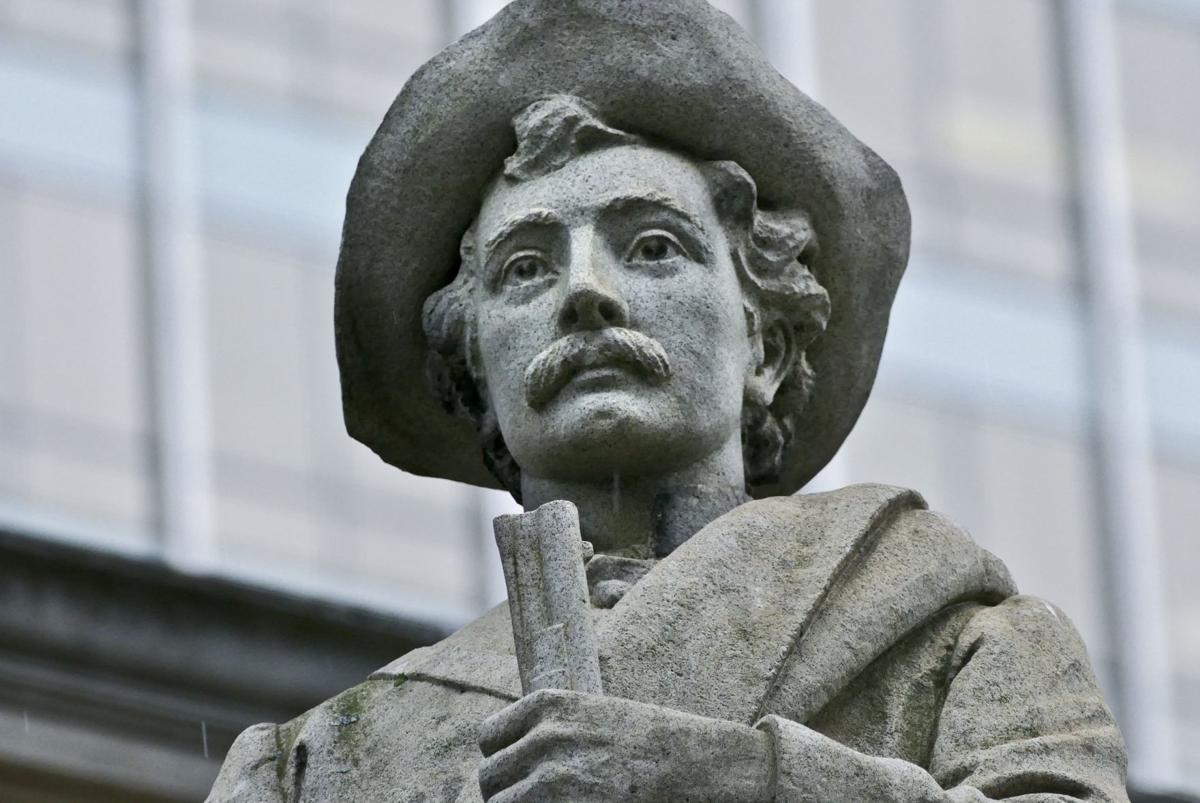 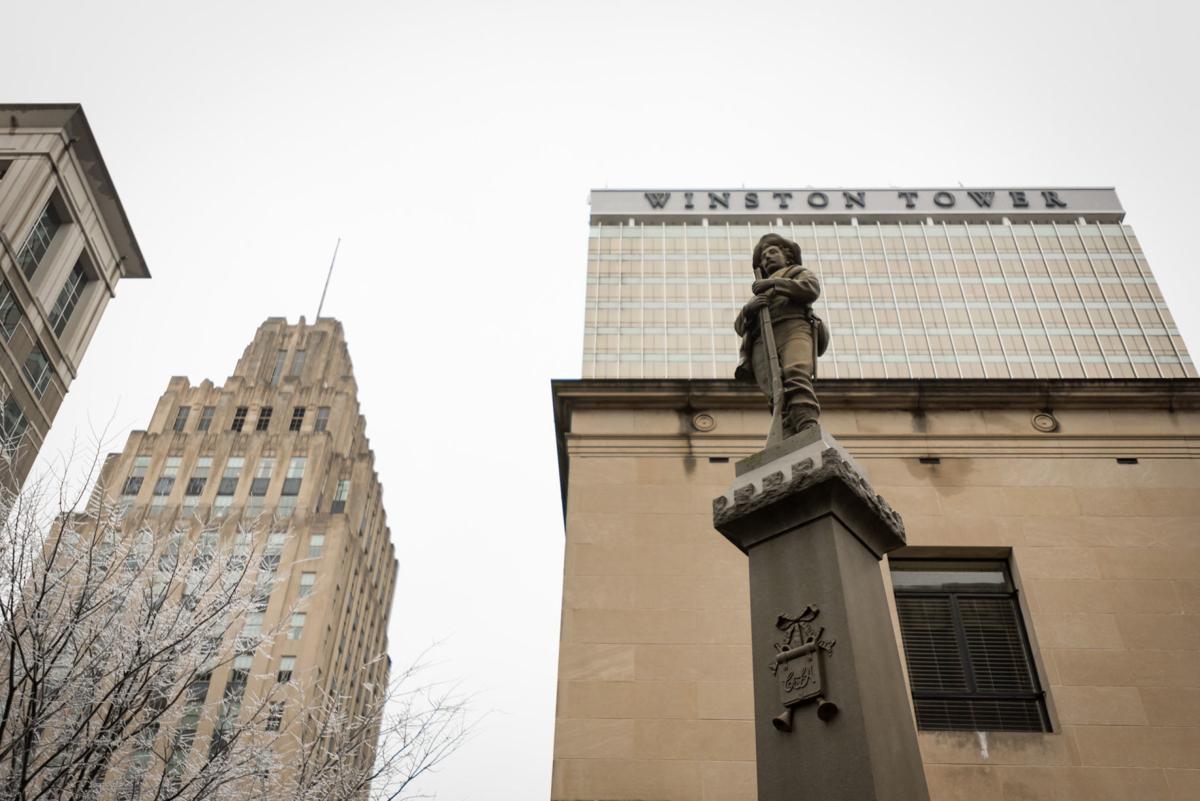 The Confederate statue stands during a rally Sunday at the corner of Fourth and Liberty streets in downtown Winston-Salem. 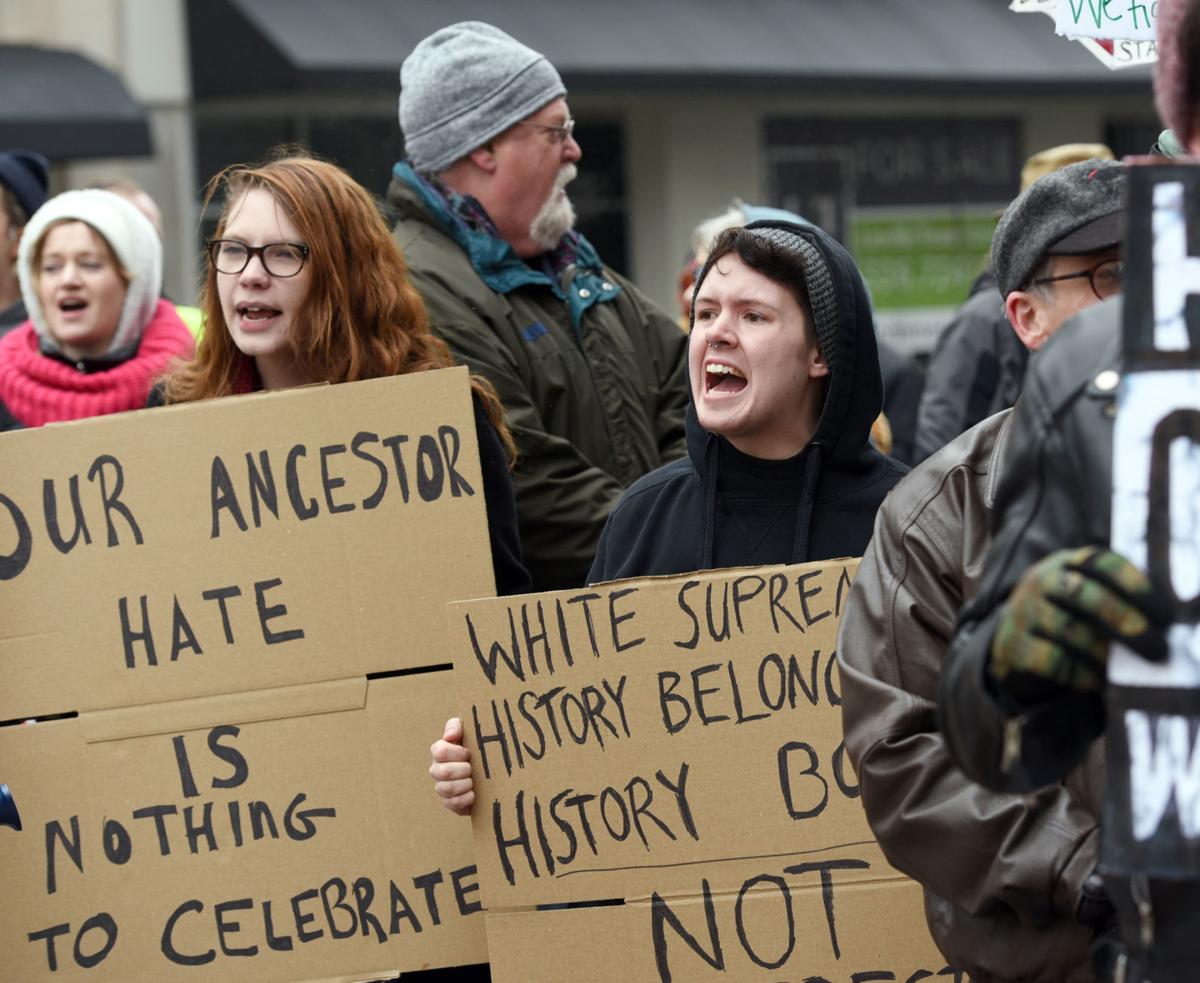 Demonstrators in support of moving the Confederate statue out of downtown Winston-Salem, where it has stood since 1905, chant their opposition to the monument on Jan. 13. 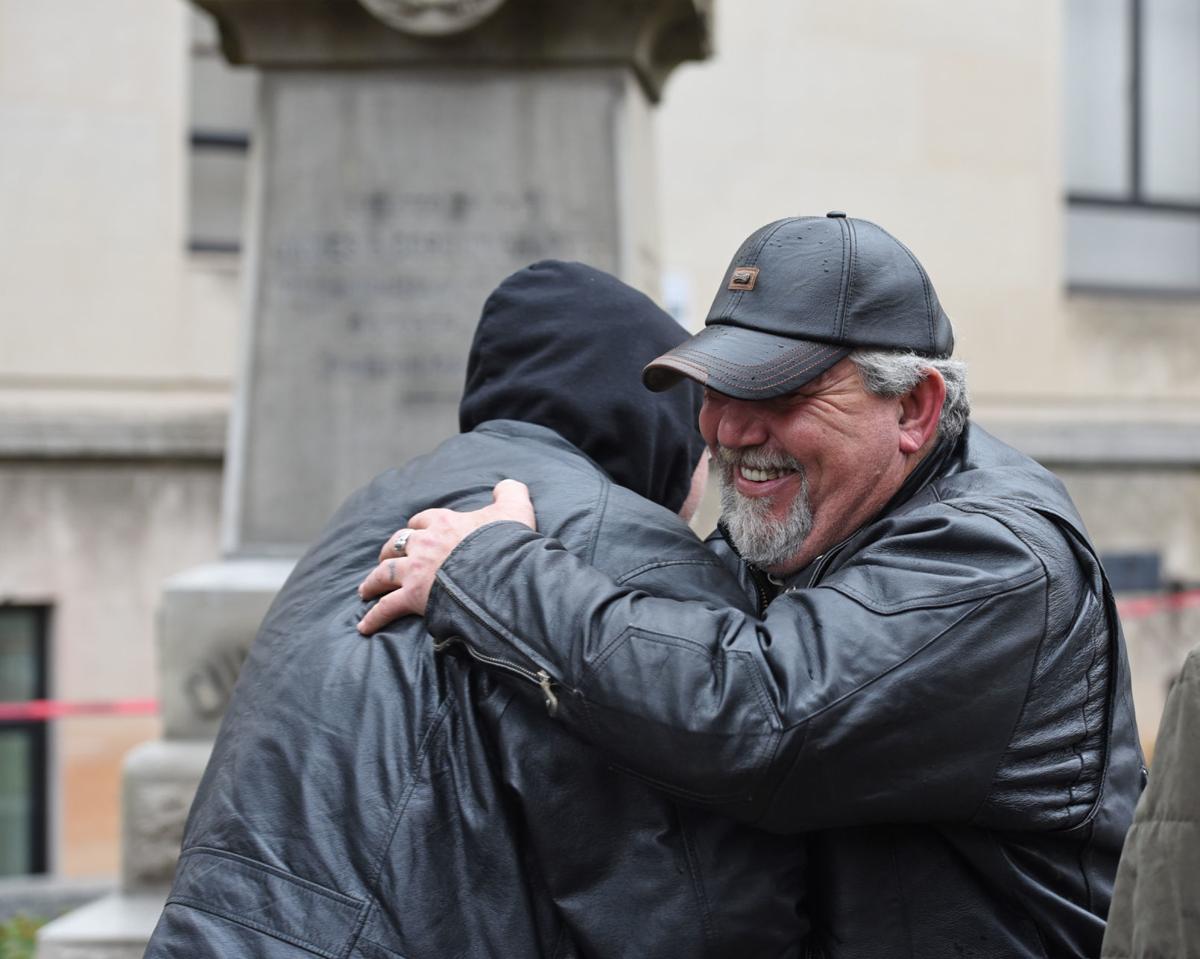 Supporters of the Confederate statue at the corner of Fourth and Liberty streets hug before dispersing Sunday, Jan. 13. 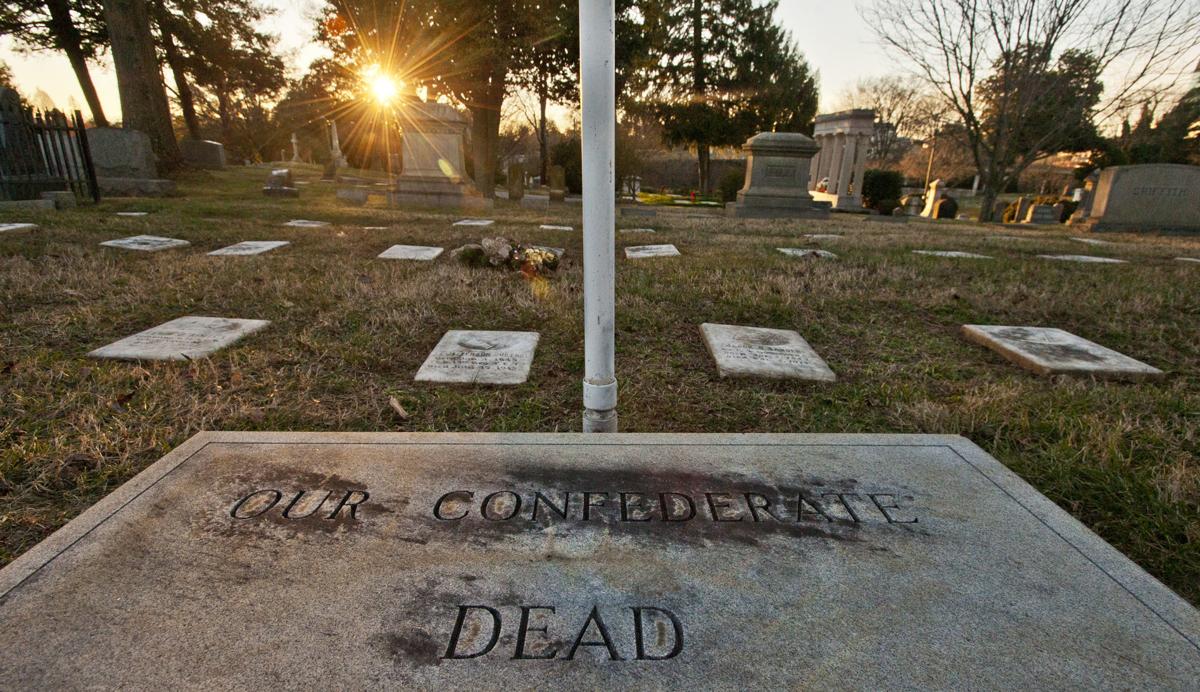 The Confederate section in Salem Cemetery, where the monument will likely end up.

Winston-Salem officials say they will remove the Confederate statue downtown sometime after today and without filing any legal notice.

Assistant City Manager Damon Dequenne, citing acts of vandalism and the need for police presence at the statue, declared the Confederate monument a public nuisance Wednesday morning in accordance with state law.

The law gives the city the authority to remove anything determined to “be dangerous or prejudicial to the public health or public safety.”

At the same time Dequenne made his declaration, City Attorney Angela Carmon released a letter sent Wednesday to an attorney representing the United Daughters of the Confederacy, or UDC. The organization had asked the city to delay any action regarding the memorial for 60 days.

Carmon, in her letter, called the UDC request “an effort to cause unnecessary delay in action by the city.” She said the presence of the statue downtown presents such a threat to public safety that the city can “summarily remove the Confederate statue, without filing a lawsuit, and eventually relocate the same to Salem Cemetery.”

Carmon’s letter signals a stronger stand from the city on the issue of moving the statue, since in her earlier letter, she had said that the city would request a court order if the statue was not moved by today’s deadline.

Dequenne said Wednesday morning that he is working to find a company that can move the statue.

“We don’t want an angry group of folks pulling this thing down,” he said. “We don’t want anyone acting on their own account. We don’t want a clash between citizens who want it moved and people who don’t want it in town. The city would want to make sure it is removed in a safe and preservation-minded manner and can be put in another place.”

UDC representatives did not respond to a request for comment Wednesday.

But Winston Courthouse LLC, the owner of the renovated courthouse property where the statue stands, sent a letter to the UDC on Wednesday saying that recent demonstrations at the statue threaten the peace and comfort of people who live in the apartments in the former courthouse.

The statue must be removed without delay, the landowner told the UDC in the letter.

As recently as Monday, Winston-Salem Mayor Allen Joines had suggested a short delay for the UDC might be possible. Joines also said it was possible the city would put the statue into temporary storage.

Joines has worked out a deal with Salem Cemetery to locate the monument there, possibly in a part of the cemetery where Confederate veterans chose to be buried with other veterans in the early years of the 20th century. The cemetery is privately owned.

Statues have been toppled by protesters in Durham and in Chapel Hill. Here, the statue has been vandalized twice by graffiti, which was quickly removed.

But Carmon said in her letter Wednesday that pro- and anti-statue activists were guilty of “lapses in good judgment” during an event on Jan. 13 that brought both sides to the vicinity of the statue at the corner of West Fourth and North Liberty Streets.

Carmon said Winston-Salem police learned that one group, not identified, “made a decision to hire armed security personnel” to protect the statue during the event, even though it had been told that city police would provide protection.

Carmon said the hired security people told police they would be armed only with nonlethal weapons, but police told them to leave the area. She said officers were worried that the presence of hired security would make it hard for both the public and police to tell who was who.

Carmon said authorities were also concerned that some people might bring guns to the event despite laws prohibiting them during a demonstration.

“Emotions on both sides of an issue often escalate, causing people to make decisions contrary to law and reason,” Carmon wrote to the UDC. “As time has demonstrated, such decisions have not always been made in the interest of public safety.”

As well, Carmon said, incidents such as someone writing “Cowards and Traitors” on the statue was “clearly meant to incite a public response.”

Members of the Heirs to the Confederacy, the only pro-statue group to ask for a permit for its Jan. 13 event, said they did not hire the security mentioned in Carmon’s letter. One member of the Heirs group said he knows who did hire security but both that person and Carmon declined to give names.

In her letter, Carmon said that both the NAACP and the Ministers’ Conference of Winston-Salem and Vicinity had asked for calm, and that the work of those groups was “the only reason other protests and demonstrations have yet to occur.”

The Rev. Alvin Carlisle, the president of the Winston-Salem chapter of the NAACP, called the city’s decision “a good move,” adding that the statue “represents hate and division in our community” in addition to being a public-safety concern.

Tina Tru, one of the organizers of anti-statue protests here, said her group will hold a news conference at the statue site at 4 p.m. Friday.

“We are glad the statue is coming down, but we want to continue to fight against white supremacy and injustice that put it there in the first place,” Tru said in an email.

Lance Spivey, the chairman of the board of the Heirs group, said he would be disappointed if the statue move goes through.

“People need to realize that those monuments are not monuments to racism,” Spivey said. “They are monuments to people who fought and died for what they believed in, and are a reminder to keep it from happening again.”

If city officials follow through, Winston-Salem would be among the first cities in North Carolina to remove a Confederate monument by order of the government.

In 2015, Charlotte removed for cleaning a Confederate monument that had been vandalized, according to The Charlotte Observer. The move came just before the passage of a state law forbidding the movement of publicly owned monuments.

In 2011, the Confederate monument in Reidsville was damaged when a vehicle struck it, the Greensboro News & Record reported. The UDC, which owned that statue, reinstalled it on property it owns in a cemetery.

Carmon’s letter notes that the Winston Courthouse company LLC, the owner of the renovated courthouse property where the statue stands, has also asked the UDC to move the statue. She tells the UDC that a state law prohibiting the movement of publicly owned monuments does not apply because the statue is “privately owned” and is on private property.

When Winston Courthouse bought the former courthouse property from Forsyth County in 2014, the sale did not include monuments on the property.

In the past, the UDC has claimed ownership of the monument. More recently, the UDC questioned whether that was really the case and said in its letter asking for the 60-day delay that ownership was one of the questions to be decided. The UDC has suggested that Forsyth County might ultimately have the right to decide the statue’s fate.

Even though the UDC’s attorney has questioned whether the old courthouse’s historic-property designation forbids removal of the statue, Dequenne said that the city can remove the statue because of the public-safety concern.

Mitch Kokai, a policy analyst with the John Locke Foundation, a nonprofit conservative-leaning research group based in Raleigh, gives the bill little chance of passage. He said Republicans controlling the N.C. House have shown little interest in revisiting the statue-related legislation.

For nearly 114 years, the Confederate statue has stood on its pedestal outside the old county courthouse on Fourth Street in downtown Winston-Salem.

What will happen to Winston-Salem's confederate statue? Landowner and city discussing 'next steps.'

With days to go before a deadline, City Attorney Angela Carmon said she’s having discussions with the attorney representing Winston Courthouse…

The Confederate statue stands during a rally Sunday at the corner of Fourth and Liberty streets in downtown Winston-Salem.

Demonstrators in support of moving the Confederate statue out of downtown Winston-Salem, where it has stood since 1905, chant their opposition to the monument on Jan. 13.

Supporters of the Confederate statue at the corner of Fourth and Liberty streets hug before dispersing Sunday, Jan. 13.

The Confederate section in Salem Cemetery, where the monument will likely end up.