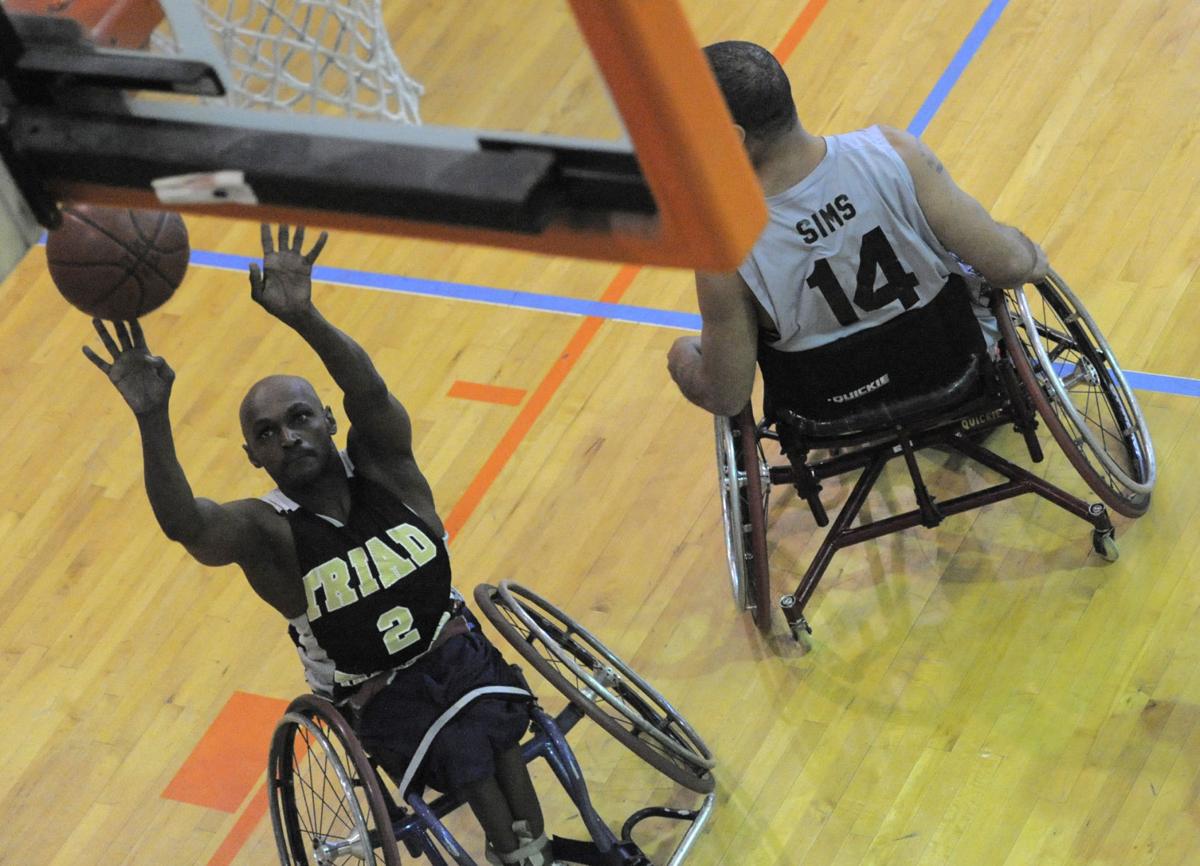 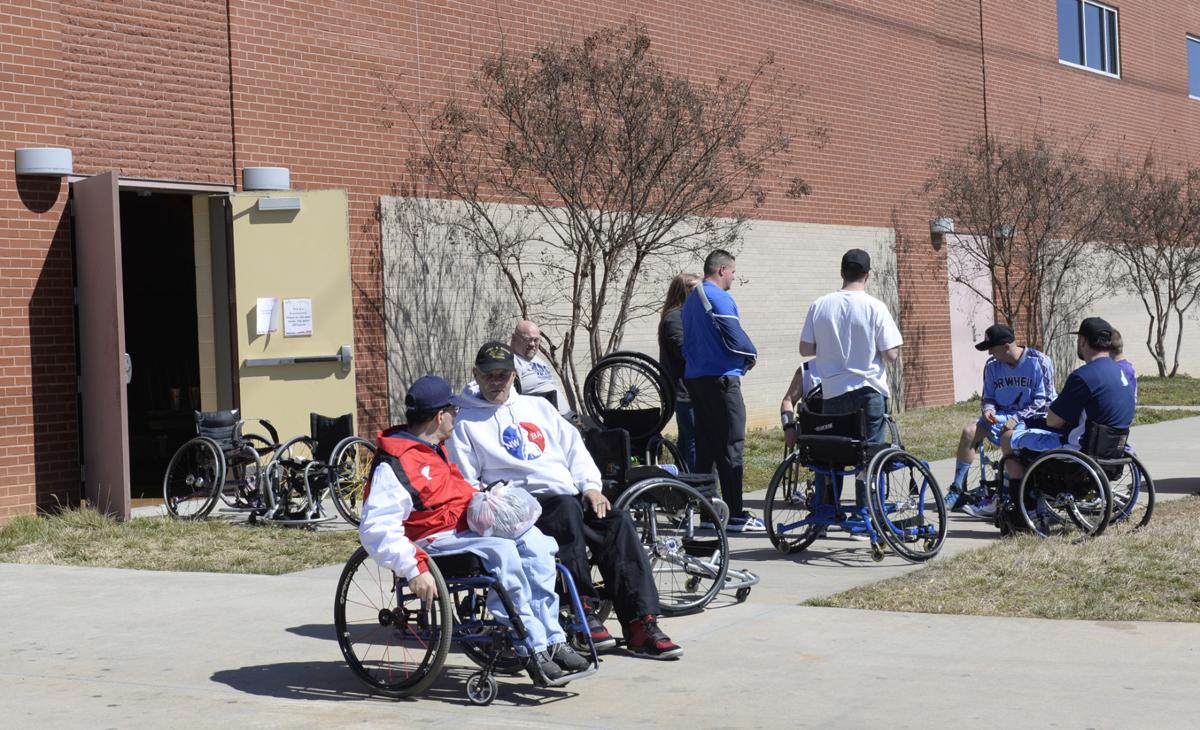 Players relax enjoy the warm weather during a break in the 2015 Carolina's Conference Wheelchair Basketball Tournament at the Gateway YWCA in Winston-Salem, N.C., Sunday, March 8, 2015. 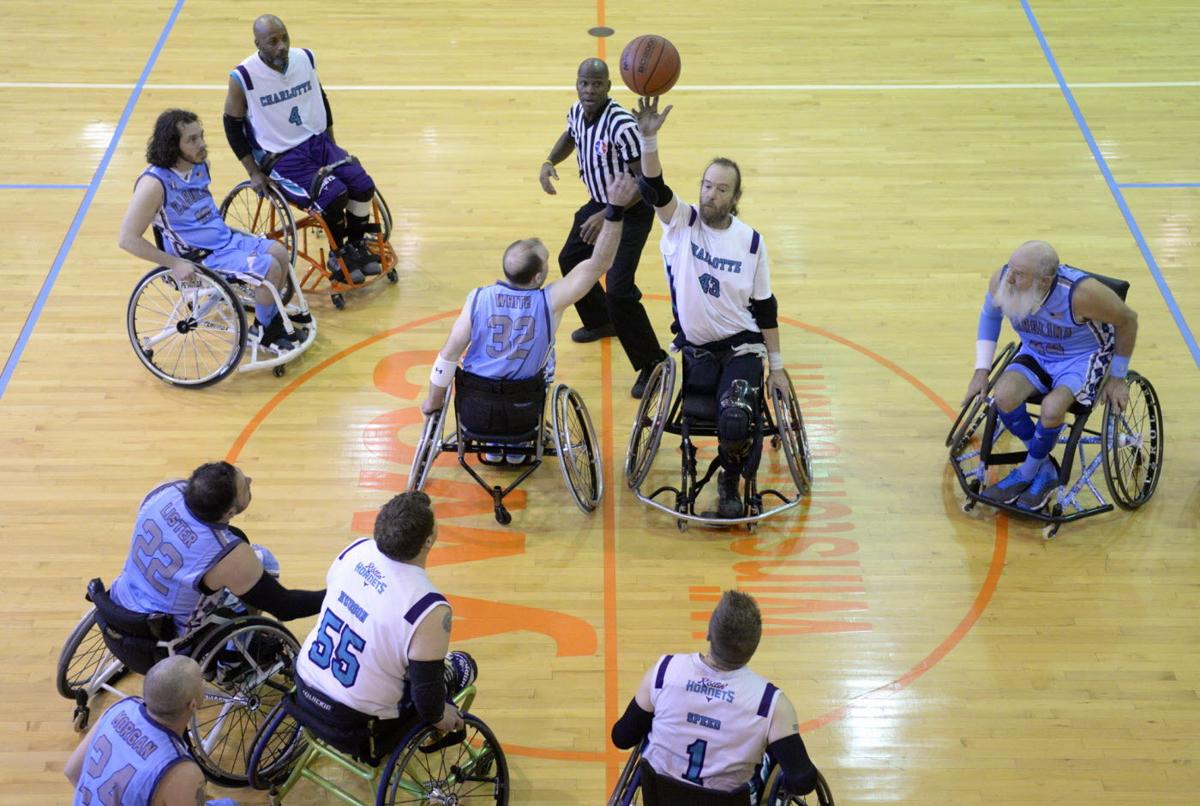 Carolina Tarwheels Roger White (32) battles against Ctharlotte Hornets Jimmy Bruce (43) for the tip-off of the championship game during the 2015 Carolina's Conference Wheelchair Basketball Tournament at the Gateway YWCA in Winston-Salem, N.C., Sunday, March 8, 2015. 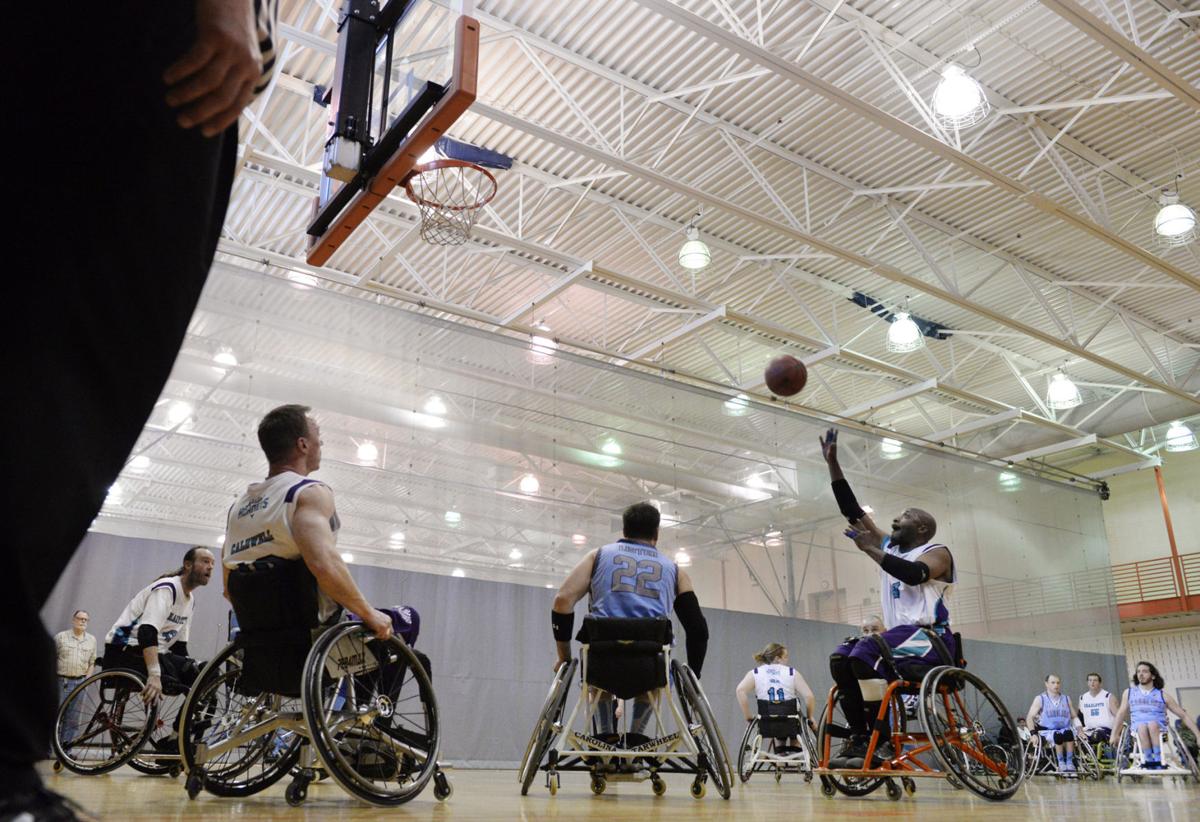 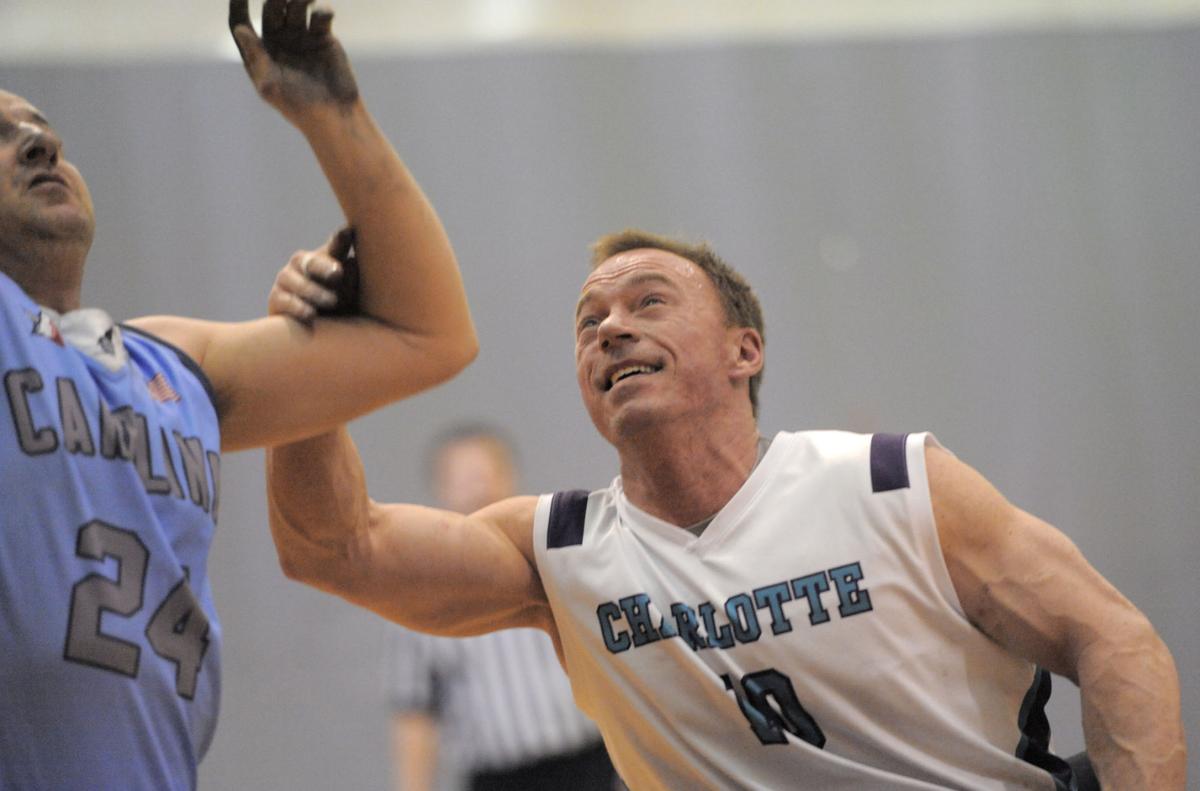 Members of the Winston-Salem Triad Trackers wheelchair basketball team raced up and down the court Sunday against the Augusta Bulldogs, wheelchairs knocking together as they vied for the ball and executed plays.

The Triad Trackers won that game to finish seventh in the Carolinas Wheelchair Basketball Conference tournament.

The team may not have won the championship, but it improved on last year’s finish and had the coveted role of tournament host, an opportunity players hoped would raise local awareness of the league.

The Triad Trackers hosted the Carolinas Conference tournament at the Gateway YWCA on Saturday and Sunday. The tournament culminated with a championship game on Sunday afternoon, where the Carolina Tarwheels beat the Charlotte Hornets 52-40.

The conference has 10 teams from North Carolina, South Carolina and Georgia. The top four teams are preparing to compete in the national tournament next month. The teams are part of the National Wheelchair Basketball Association.

The tournament did not charge spectator admission fees. Organizers hoped people would come out and learn about the league.

Brian Robinson, coach for the Triad Trackers, said: “It introduces our community to wheelchair basketball. I think this is an unknown commodity in a way. … It’s very popular across the nation.”

The teams feature players who have injuries or impairments that would prevent them from playing “stand-up” basketball.

Wheelchair basketball is a fast-paced sport with a lot of contact.

“It’s a lot more physical than people think it is,” said Daniel Moody, of Kernersville, president of the Triad Trackers.

The rules are similar to traditional basketball, with a few modifications. For example, players must dribble the ball after turning their wheels twice to avoid getting called for traveling.

The custom-built wheelchairs have slanted wheels, with a bumper and small wheels in front for balance and protection. The custom wheelchairs can cost from a few thousand to $6,000.

Orlando Perez of Augusta, Ga., plays for the Georgia Hawks, who finished fourth in the tournament and will go to the national tournament.

“It’s a big community between the athletes,” Perez said, “and it becomes more like a family. You look forward to the tournament each year.”

Perez was injured in the Army in 1995 when he fell during a training exercise, causing a tumor on his spinal cord.

Two years later, his wife saw a poster about wheelchair basketball at the veteran’s hospital. He has been playing since 1998 and is on Puerto Rico’s Paralympic team.

“It changed my life,” he said.

Travis Smith, of Winston-Salem, is in his third year playing for the Triad Trackers. Smith suffered a spinal cord injury in a motorcycle accident in 2006, just a month and a half after graduating from high school.

While in rehab for his injury, Smith was introduced to wheelchair basketball. Now he plays basketball and sled hockey, adapted ice hockey.

He said the basketball tournament was exciting and very competitive.

Moody said it helps to be around other people who have gone through the same grieving and accepting process.

He suffered a spinal cord injury in a car wreck in 2005. He had always been an athletic guy, trying everything from rugby to soccer to surfing.

“I had to find some sort of outlet for it,” Moody said of his athletic drive.

Now he is in his ninth season with Triad Trackers.

“For the time I’m on the court, I have no other care in the world,” Moody said.

Moody said it was great to have the tournament here. He said when a lot of people leave the games, they think, “Wow, I was not expecting that.”

One of those people was Patti Beane of Lexington, who volunteered at the tournament on Saturday. Her daughter plays in Robinson’s Winston-Salem Stealers AAU basketball program.

Beane was surprised by the intensity of the game and came back on Sunday, this time joined by her husband.

“I will try to keep up with their schedule now and come out to watch them,” Beane said.

This was Robinson’s second year as head coach of the Triad Trackers. He said the team showed improvement from last year, when they came in last.

Robinson is the girls basketball coach at Bishop McGuinness and runs club programs such as the Winston-Salem Stealers.

Robinson was approached about coaching the Triad Trackers after leading McGuinness to its eighth state championship.

“It has been inspirational for me,” Robinson said.

Daniel Moody with the Triad Trackers talks about the Carolinas Wheelchair Basketball Conference tournament in Winston-Salem on Sunday.

Players relax enjoy the warm weather during a break in the 2015 Carolina's Conference Wheelchair Basketball Tournament at the Gateway YWCA in Winston-Salem, N.C., Sunday, March 8, 2015.

Carolina Tarwheels Roger White (32) battles against Ctharlotte Hornets Jimmy Bruce (43) for the tip-off of the championship game during the 2015 Carolina's Conference Wheelchair Basketball Tournament at the Gateway YWCA in Winston-Salem, N.C., Sunday, March 8, 2015.