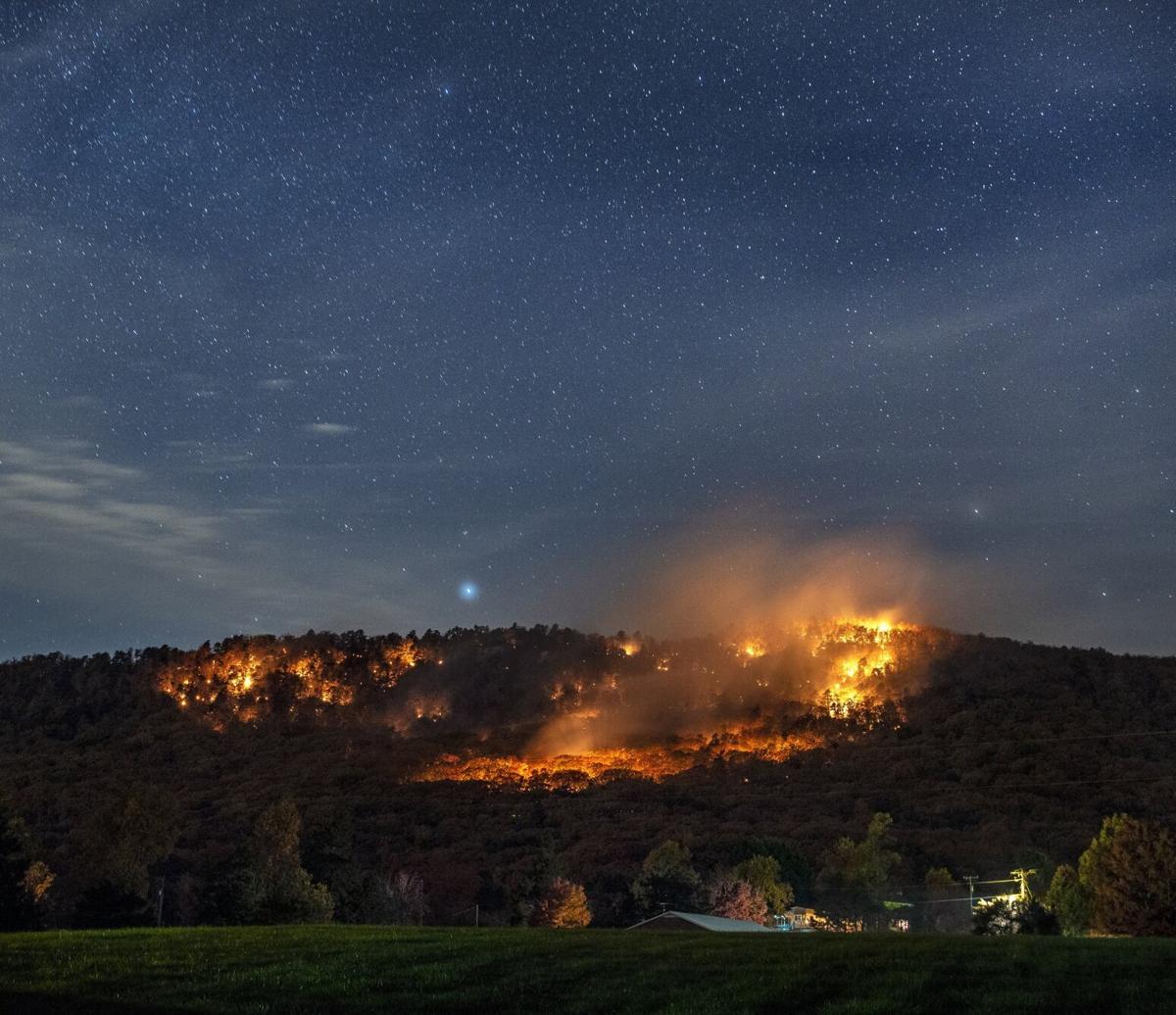 Stars are visible above the Sauratown Mountain fire as it burned last week. Authorities have said that an abandoned campfire led to the fire. 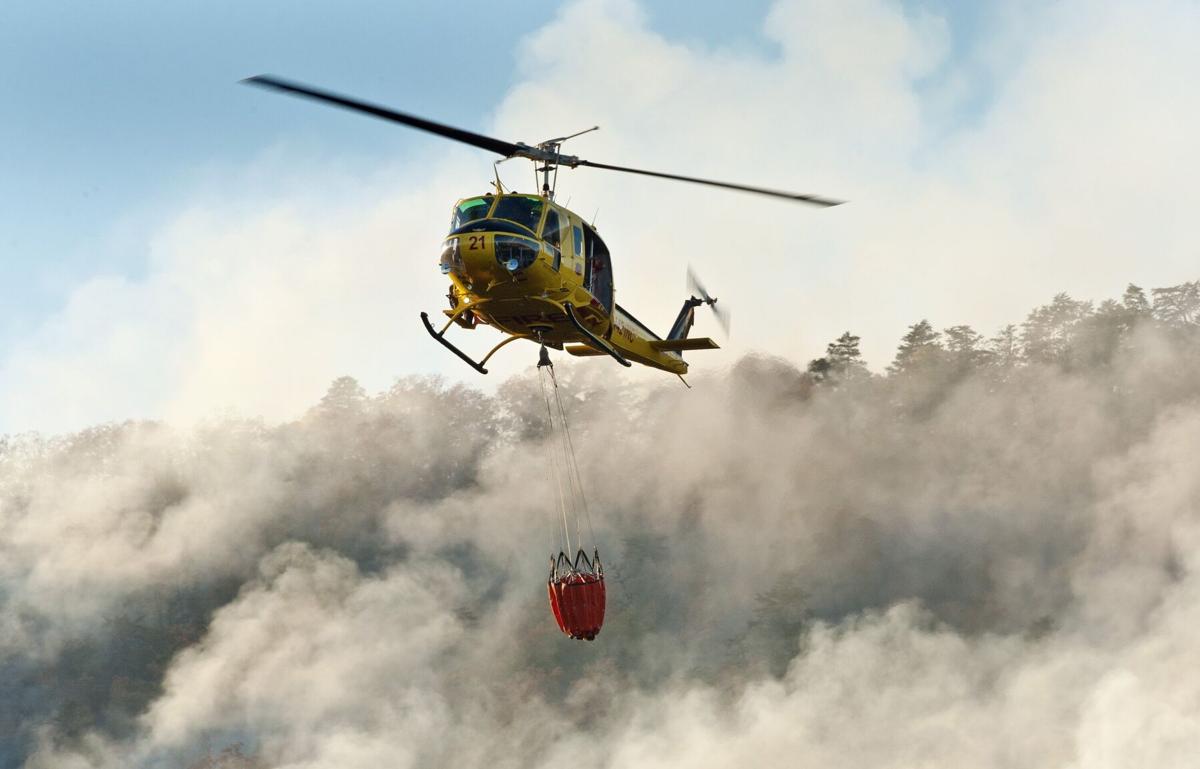 A North Carolina Forest Service helicopter approaches a nearby pond for a water pickup to drop on the wildfire on Sauratown Mountain on Wednesday.

As part of the total burned acres, the fire spread over 5 additional acres “that ate through some of these containment lines up near the (mountain’s) northeast corner,” said Jimmy Holt, a Guilford County ranger with the N.C. Forest Service.

The fire was first reported at 11:45 a.m. Tuesday, Holt said. The fire initially burned 3 acres Tuesday, and then it grew to burn 15 to 20 acres Wednesday.

A group of 28 firefighters worked Thursday to control the fire, the forest service said. No injuries have been reported.

“They are just having a heck of a time with containment up there off the ridge with those hand (water) lines,” Holt said. “We can’t put (bull)dozers up there.”

The fire isn’t threatening any homes, businesses or other structures, the forest service said. The cause of the fire isn’t known.

Firefighters installed containment lines Wednesday on the fire’s western and eastern flanks and across the mountain’s ridgeline, the forest service said.

Tractor plows installed containment line below the fire to protect homes at the base of the mountain, the forest service said.

A scout plane and a helicopter dropped water Thursday on the fire, Holt said. Due to the area’s rough and steep terrain, firefighters must hike to the scene of the fire.

There are no access roads for vehicles on the mountain.

A light rain fell on the wildfire Thursday, Holt said.

“I don’t even know if any of it made it through the canopy of trees,” Holt said of the rain. “It was just enough to raise the humidity.”

Particulate matter, an air pollutant generated by the fire’s smoke, was minimal Thursday, Holt said. Particulate matter is a mixture of solid particles and liquid droplets found in the air, according to the U.S. Environmental Protection Agency.

Some particles, such as smoke emitted by fires, are large or dark enough to be seen by the naked eye, the EPA said.

“There wasn’t as much smoke (Thursday) as it had been due to the conditions,” Holt said.

Thursday’s high temperature in Stokes County was 70 degrees, according to the National Weather Service in Blacksburg, Va.

A 3 mph south wind dissipated most of the smoke on Thursday, he said.

“Twenty five acres in the grand scheme of things is a pretty small area in terms of burning,” Holt said.

The U.S. Air Quality Index measured the particulate matter over Stokes County at 2.5, which means the air quality was acceptable Thursday, but there might have been a risk for people who are unusually sensitive to air pollution.

Some particulate matter can be so small that it could get deep in people’s lungs and possibly in people’s bloodstream, according to the EPA.

William K. Smith, a professor of botany at Wake Forest University, said that some of the smoke’s particulate matter could settle in the mountain’s valley and pose a risk to people with pre-existing respiratory problems.

Stan Meiburg, the director of graduate studies in sustainability at Wake Forest, said a spike in air pollution from the fire is expected.

“But it should not last long,” said Meiburg, the chairman of the N.C. Environmental Management Commission.

Thursday’s night forecast in the area near the wildfire called for a 100% chance of rain with sustained winds ranging from 13 to 18 mph, said William Perry, a weather-service meteorologist in Blacksburg. Those winds were expected to gust as high as 40 mph.

“If it rains hard enough, it could put out most of the fire,” Perry said. “The leaves may prevent all of that rain from reaching the ground. The wind could expand the flames.”

Friday’s forecast near Sauratown Mountain calls for a 60% chance of rain with high temperature near 62 degrees, Perry said.

“Friday may be a better day to contain the fire,” Perry said.

Stars are visible above the Sauratown Mountain fire as it burned last week. Authorities have said that an abandoned campfire led to the fire.

A North Carolina Forest Service helicopter approaches a nearby pond for a water pickup to drop on the wildfire on Sauratown Mountain on Wednesday.