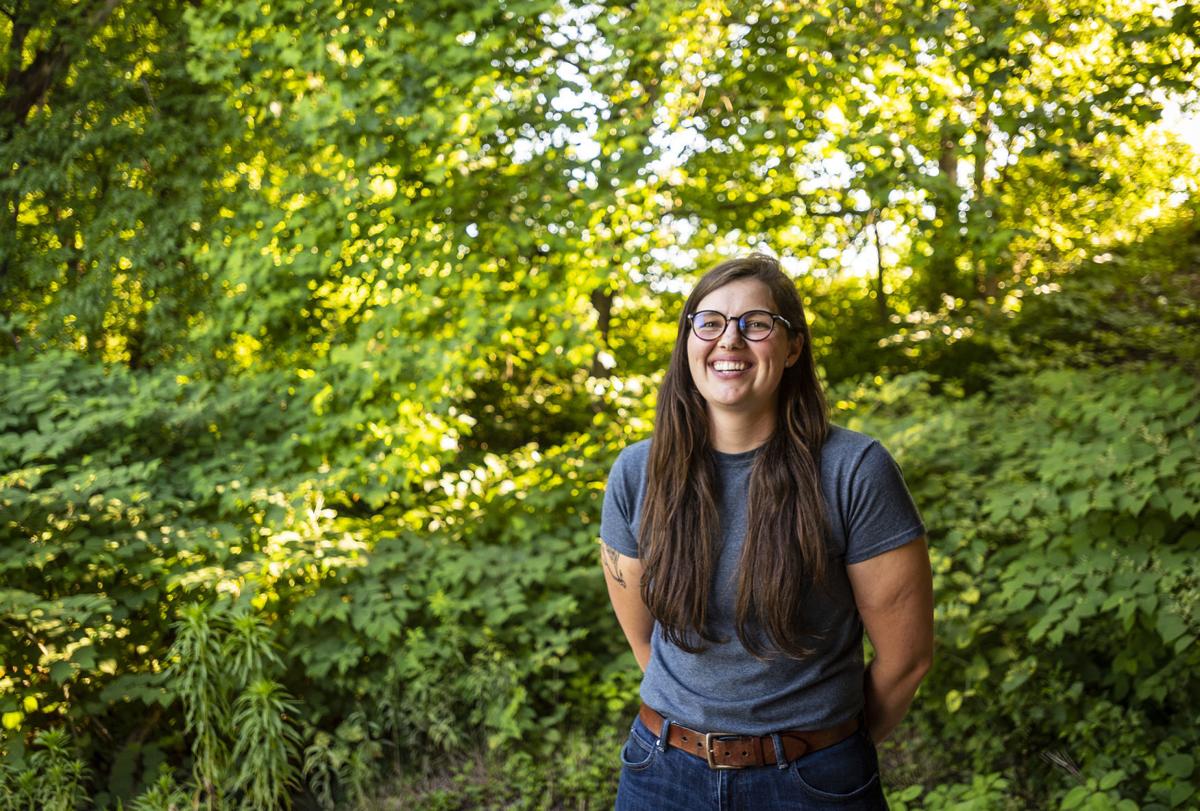 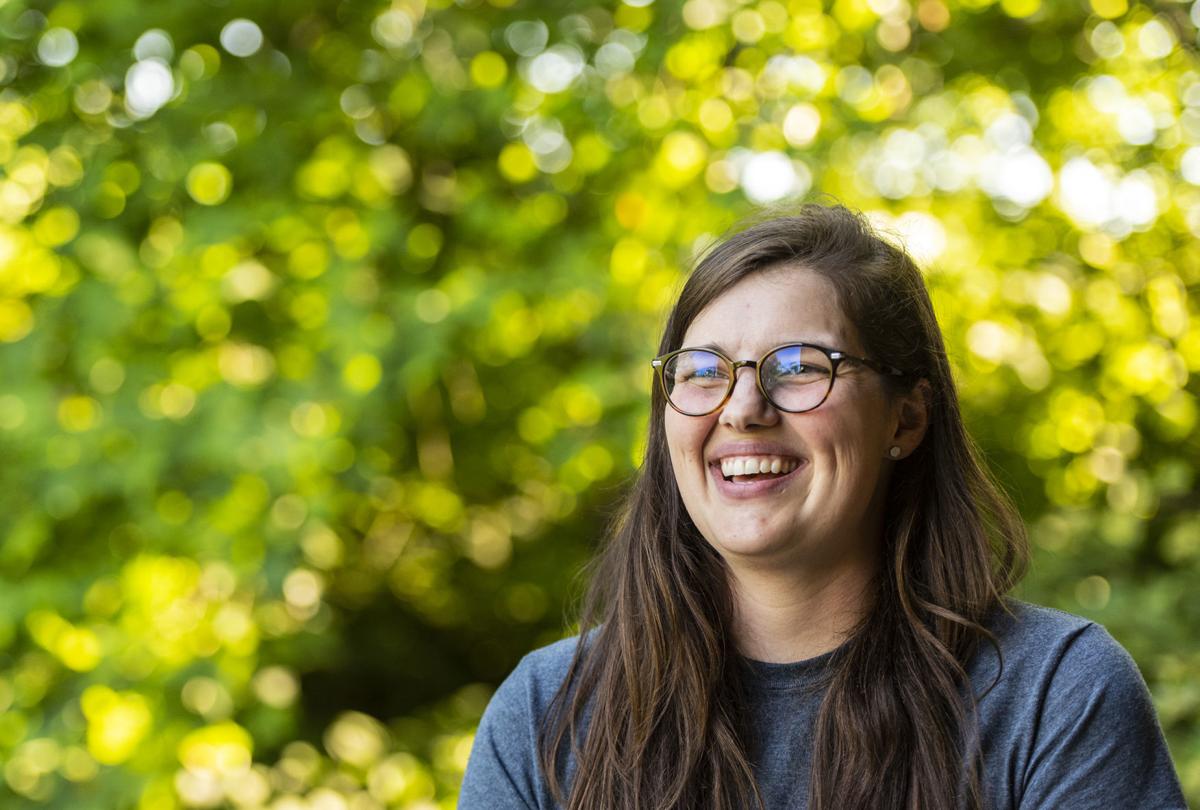 “We’re not sad people sitting around a vape shop because the factory closed,” L.B. Prevette said of her fellow Wilkes County residents. “We’re people who are still living here because we know it’s going to be better.”

WILKESBORO — In March, L.B. Prevette, the daughter of a poultry farmer in tiny Union Grove, was invited to speak to TV writers from Netflix, Hulu, ABC and other networks at The Getty Center in Los Angeles.

Prevette was among an impressive roster of speakers.

She talked about Wilkes County.

Prevette, 28, did the same thing in Washington, D.C., last month at an event sponsored by the prestigious Aspen Institute, a nonpartisan think tank that promotes community and values, and on National Public Radio’s weekday show, 1A.

Ask Prevette what she did to garner such attention and she emits a self-deprecating laugh.

She asked the same question of herself when she saw the speaker lineup at The Getty.

“I just have people over for dinner,” Prevette said the other week, sitting in Anchor Coffee Co. in North Wilkesboro.

While it’s true that Prevette loves dinner parties, that’s only part of the story.

Prevette is among a group of Wilkes County residents who are working to rewrite their county’s narrative, from one that gained notoriety for its plummeting median income and number of meth labs, to one with a rich cultural history, beautiful scenery and goodhearted people.

A 2016 New York Times article that focused on the economic anxieties of regulars at a vape shop painted a picture of a county that was downtrodden and desperate. It both rankled and motivated Prevette and others to do more to boost the county’s good qualities.

“We’re not sad people sitting around a vape shop because the factory closed,” said Prevette, who works for Lowe’s Home Improvement. “We’re people who are still living here because we know it’s going to be better. It’s going to be hard, but it’s going to be so worth it.”

Ironically, it was another writer from The New York Times, columnist David Brooks, who has played a role in casting Wilkes County in a more positive light by recognizing the work of Prevette and other community builders.

Brooks, who writes frequently on culture and social connectivity, has a lead role in the Aspen Institute’s new program, Weave: The Social Fabric Project. The idea is to build a movement of Weavers, people who build community through connections and help others feel loved and valued, with the goal of transforming a society that has grown isolated.

He and his team traveled the country looking for “Weavers” and happened upon Wilkes County through one of those “friend-of-a-friend” situations.

They are a group of community builders whose work runs the gamut, from prison re-entry programs to promoting the arts.

Prevette is also a lesbian, a fact that she does not hide in a socially conservative county.

But what Brooks and others with the Aspen Institute found so intriguing was her willingness to insert herself in local politics and her track record of building community, person-by-person, through her many dinners.

“It’s what I’ve always done, have people over for dinner,” she said. “I think people are craving that: ‘I want to be your friend. Do you want to get a drink?’ People are afraid to be the first person to ask, so when it came down to joining the Weavers, they said, ‘Talk to L.B.’ I think it’s because I spend a lot of time talking to people.”

Cooper, a Wilkesboro attorney, was at the dinner with Brooks back in 2018. Like Prevette, Cooper is among the Millennials who grew up in Wilkes County, went away to college and decided to return. He wrote about Donald Trump’s appeal among rural voters in an essay for U.S. News and World Report in during the 2016 primary season.

“Being from a small town, you sort of knew everyone in the room. Your parents knew each other, so you know each other six different ways,” Cooper said. “So there was already a lot of connection, and there’s a tight-knit closeness that will help us thrive again.”

Cooper met Prevette at a local brewery’s trivia night that she organizes.

Though a seemingly small gesture, the trivia night at Great State Brewery and Taproom regularly attracts a big crowd.

“There was nothing else to do in Wilkes County on a Friday night,” Prevette said.

Growing up near the Iredell County line, Prevette worked on her dad’s farm. His work ethic and willingness to help out neighbors became ingrained in her.

But as a teenager, Prevette was ready to bolt. One night at a post-MerleFest party, she was called a derogatory name for a lesbian and knocked-out cold.

“I love my community. There’s nowhere more beautiful than the foothills,” she said. “But I told my dad, ‘I can’t be here.’”

She went away to college but after her dad died her sophomore year, she returned to help take care of the farm.

Finally, a family friend convinced her to go to a college in Nevada. Prevette went, studying marketing at University of Nevada in Reno. She loved it, but home, and the desire to live a purposeful life, pulled at her.

“I kept thinking of the versions of me that were still in high school. All these queer kids who are living through it. Who are still afraid,” Prevette said. “I missed community and I missed intentional community. I wanted to come back to matter.”

Prevette wound up joining forces with Forward Wilkes, a community group that Megan Barnett started a few years back to make the area a more vibrant, engaging community. Forward Wilkes has started such things as Tuesday night bike rides, community yoga classes, teen gatherings and meetings for LGBTQ teenagers at St. Paul’s Episcopal Church. Many of the events are held in public spaces, which are both free and have high visibility.

Brooks took note of all these happenings, which helped guide him as he wrote his new book, “Second Mountain: The Quest for a Moral Life.” The book focuses on the value of putting relationships above personal gain.

Brooks has written that Wilkesboro was “one of those places with a poor social infrastructure, with a paucity of places that nurture relationship. ... Today there are people from all walks of life trying to build places where relationships can form.”

Perhaps because she is both well-spoken and blunt-spoken, Prevette has served as the face of the local group of Weavers at some of these bigger events, including the gathering at The Getty and at the Aspen Institute in Washington.

The local Wilkes Weavers came back from the Washington gathering energized and ready to do more to help a community that has taken its share of economic hits, including the recent loss of 680 jobs from the corporate offices of Lowe’s Home Improvement.

“There’s this energy,” said Prevette, as bicyclists gathered outside Anchor Coffee for a weekly group ride. “For people to see our residents on a stage like that has people wanting to be a part of it, to lean in.”

“We’re not sad people sitting around a vape shop because the factory closed,” L.B. Prevette said of her fellow Wilkes County residents. “We’re people who are still living here because we know it’s going to be better.”