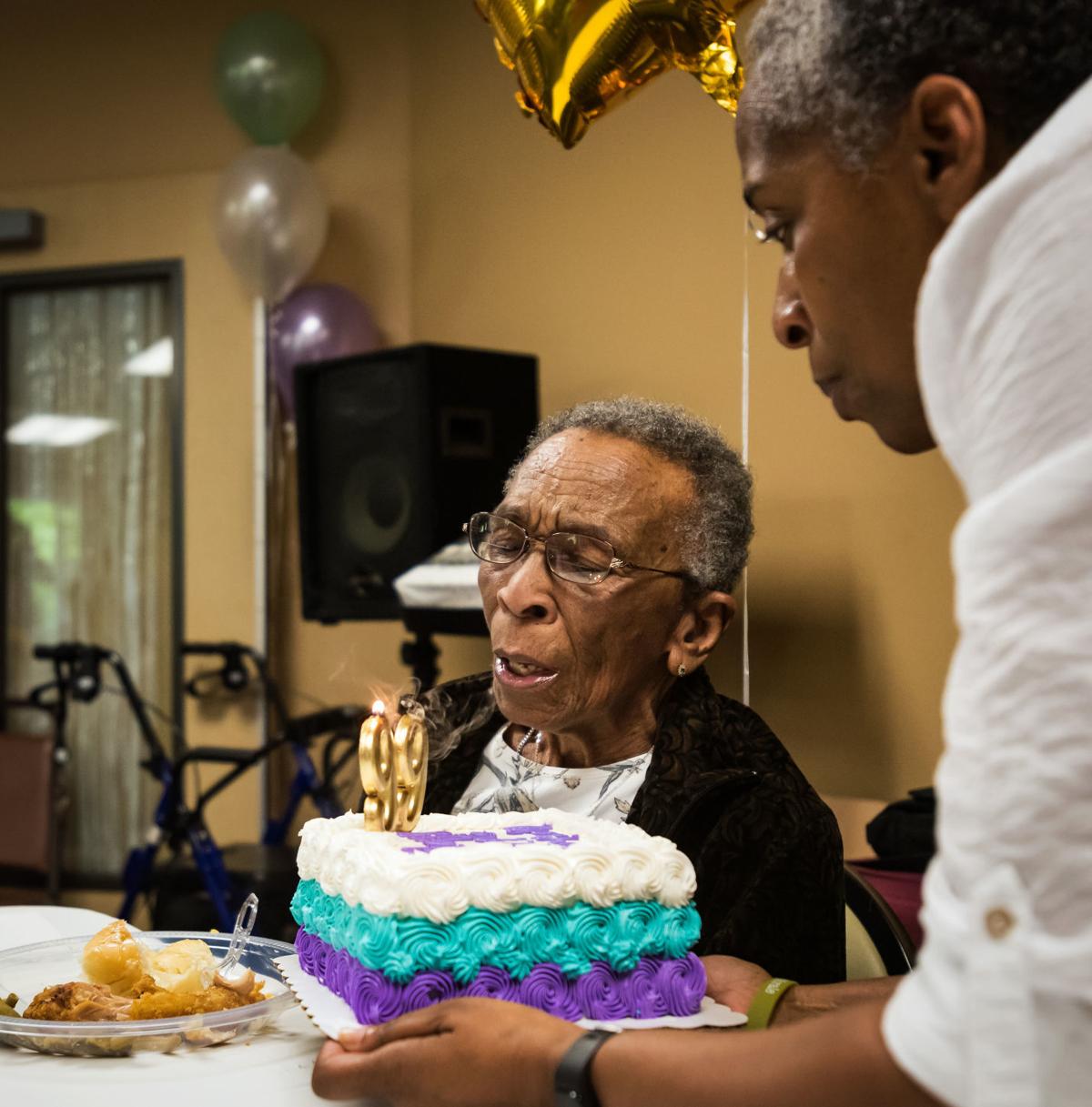 ABOVE: Elizabeth Johnson blows out the candles on her cake during a surprise party for her 99th birthday Thursday at Pinecrest Retirement Community in Hickory. 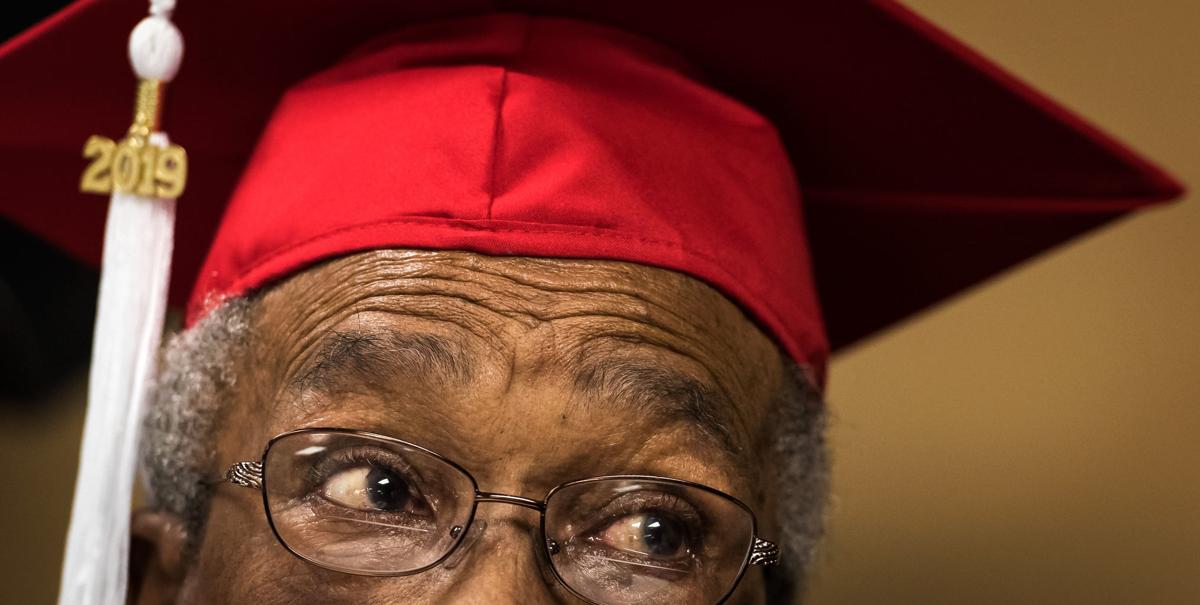 LEFT: Johnson wears a Winston-Salem State University cap that she received as a gift to reveal that she will be walking with this year’s graduating class. 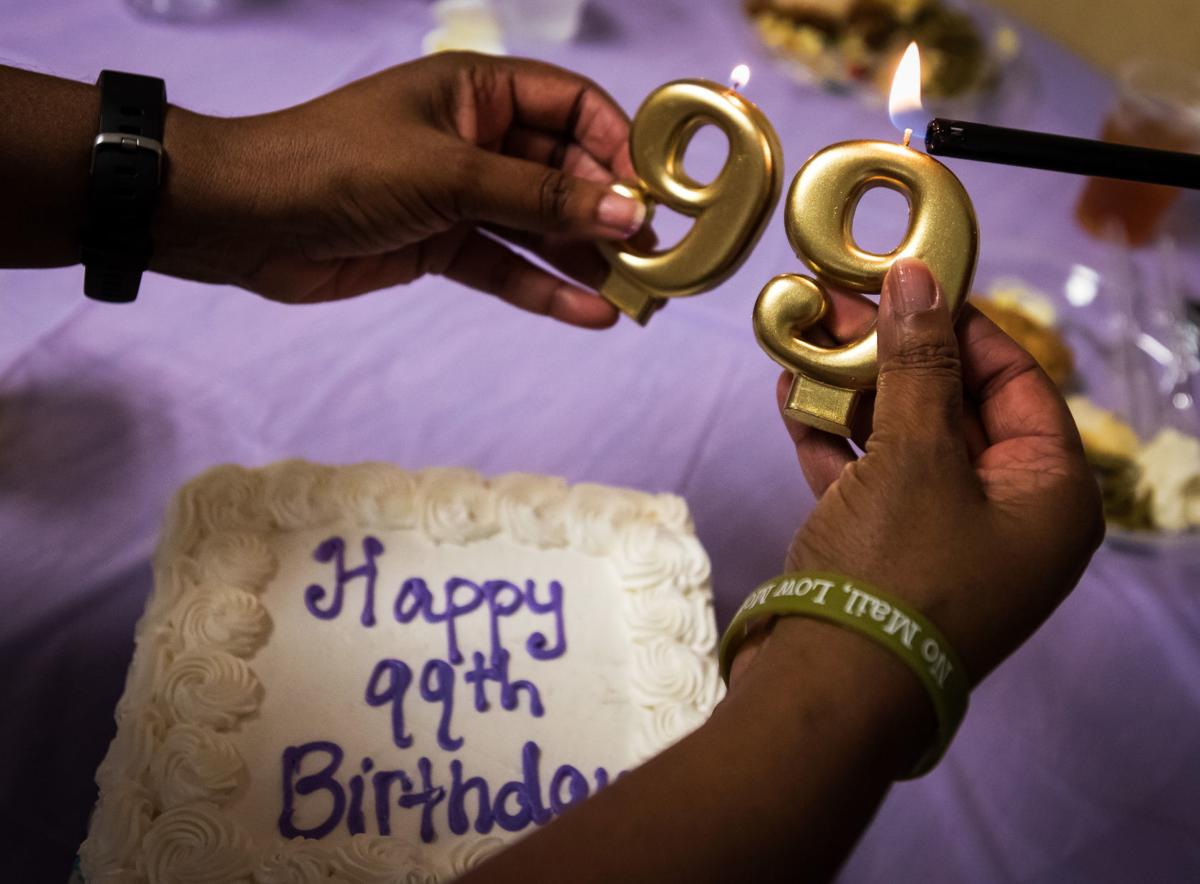 Two candles are lit for Elizabeth Johnson’s cake during a surprise party for her 99th birthday Thursday. 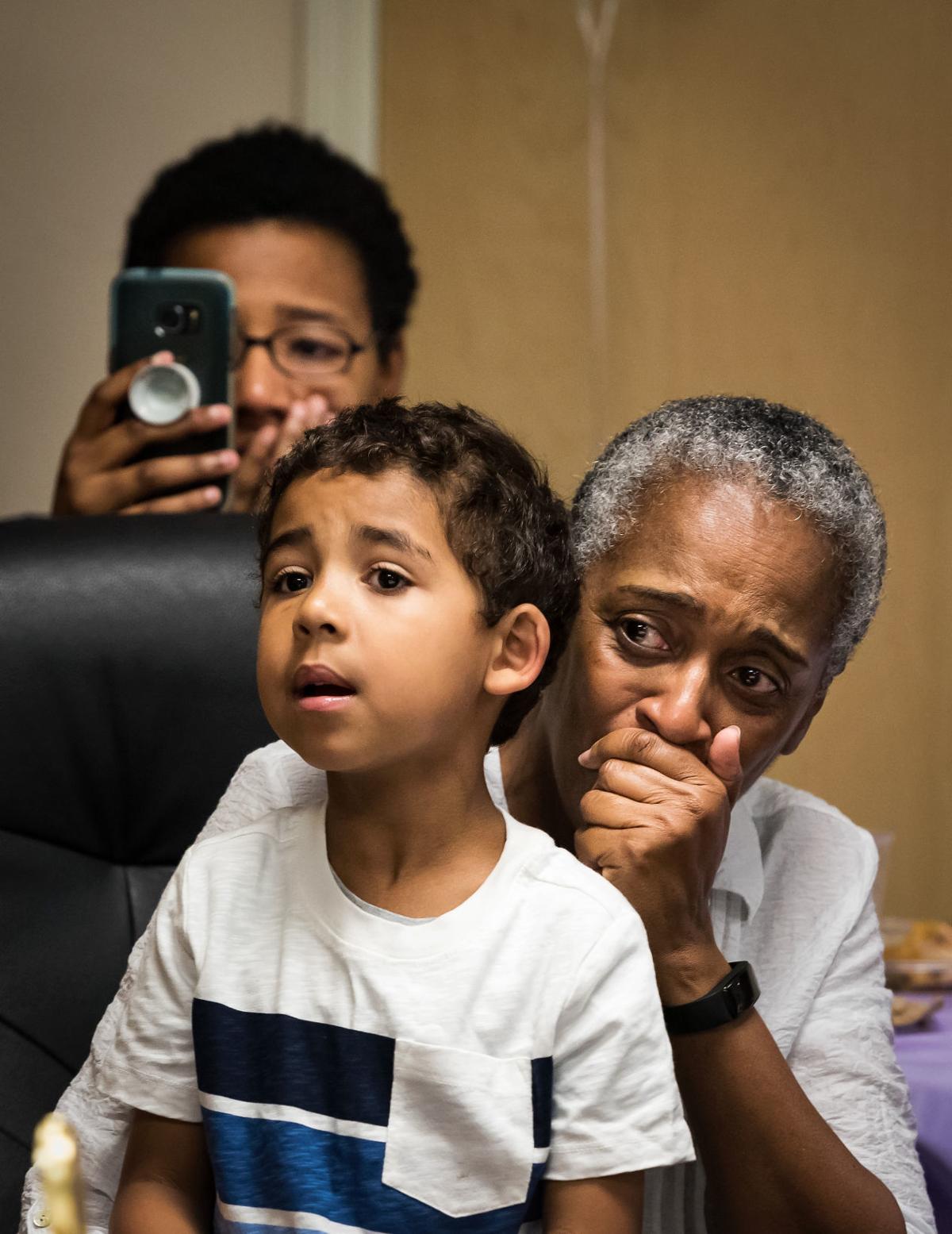 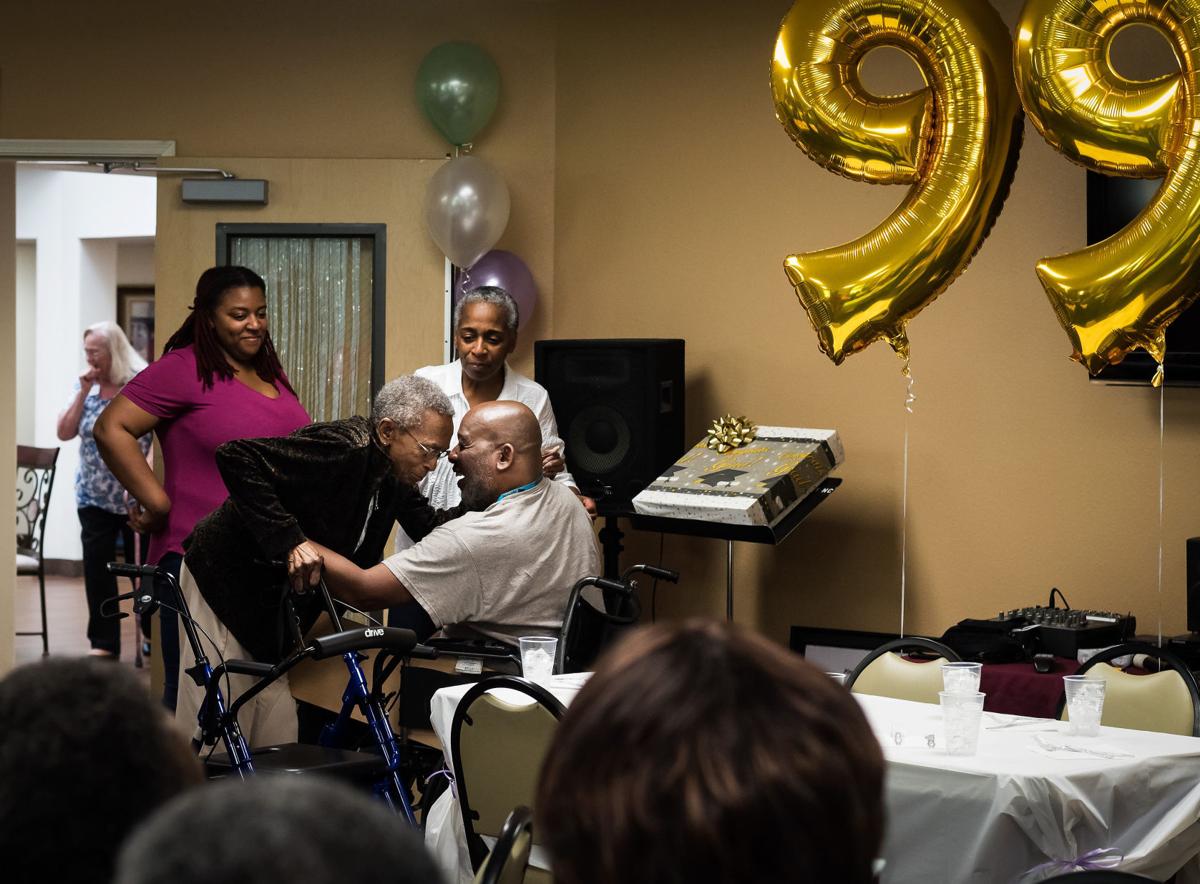 Elizabeth Johnson embraces her son David Johnson after she walks into a room full of family and friends for a surprise party thrown for her 99th birthday on Thursday. 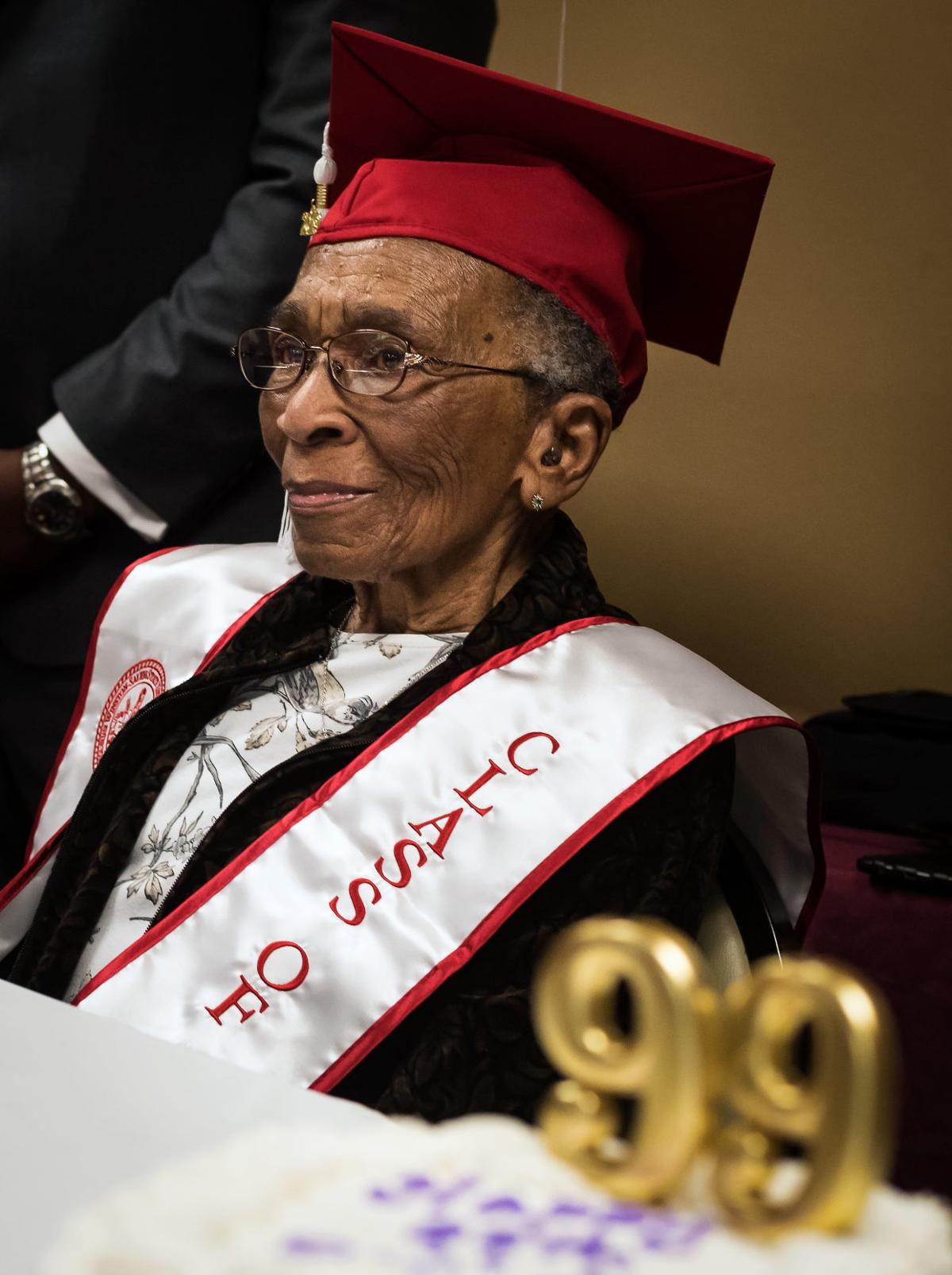 Elizabeth Johnson wears a Winston-Salem State University cap and stoll that she received as a gift to reveal that she will be walking with this year’s graduating class during a surprise party for her 99th birthday Thursday.

HICKORY — Elizabeth Barker Johnson stood frozen in the doorway, gripping her walker tightly, as the lights flicked on, revealing 60 of her closest loved ones.

It wouldn’t be the last surprise of the day as the World War II veteran celebrated her 99th birthday.

After cake, Johnson was presented with a ruby-red cap and gown and an invitation to finally walk at Winston-Salem State University’s graduation, 70 years after she completed her teaching degree there.

“I couldn’t get anyone to substitute for me back then, so I had to miss my graduation. It was terrible,” said Johnson, who began working as a teacher in Virginia right out of college. “I just can’t believe this is happening. I really think I’m dreaming.”

As Johnson tried on her WSSU cap, gown and stole Thursday — gold balloons in the shape of “99” bobbing above her head — she turned to her family at Pinecrest Retirement Community in Hickory and said with a smile: “Go Rams.”

While she didn’t get to walk across the stage due to job obligations, Johnson graduated from what was then Winston-Salem Teachers College in August 1949.

Her son, David Johnson, said getting to participate in the May 10 graduation with WSSU’s Class of 2019 graduates is a dream come true for his mother.

“That’s going to be probably the highest honor of her life,” David Johnson, 60, said. “The fact that she gets to graduate now, after all this time, is going to melt her heart. She deserves it.”

Elizabeth Johnson became the first female to attend WSSU on the GI Bill when she returned home from WWII, where she had been part of the 6888th Central Postal Directory Battalion of the Women’s Army Corps.

The battalion, of 855 women, was the only all-black female battalion stationed overseas during the war.

“She’s a hero to me,” her granddaughter Shandra Bryant said. “It’s pretty special to get to 99 and even more so when you look at her history in the Army and as an educator.”

Elizabeth Johnson’s military journey started by chance after she was inspired by an “I Want You for the U.S. Army” poster lying on the ground near her mailbox.

After graduating from Atkins High School in Winston-Salem — the closest school to Elkin for black students — Elizabeth Johnson joined the Army in 1943.

She was stationed in Kentucky for a year and a half before going overseas to England in the midst of the war, where she and the other women were tasked with handling the backlog of mail.

“I like to tell people ‘She probably had a hand in getting mail from your grandmother to your grandfather,’” Bryant, 32, said. “It was a really important job because it made sure people received mail from their loved ones back home and it kept them positive.”

But war didn’t come without its close encounters.

As a truck driver during the war, Elizabeth Johnson narrowly avoided a roadside mine in France that killed the three women driving in the vehicle in front of her, her son said.

“She was lucky and if she hadn’t been, I wouldn’t be here right now,” David Johnson said. “She’s faced war, she’s faced racism along the way as the only black school teacher in her area for a long time. She’s such a remarkable woman.”

The Elkin native is one of only five women who participated in the battalion and are still alive today.

Elizabeth Johnson — who has two children, two grandchildren, one great-grandchild and another on the way — was recently honored for her service on the floor of the U.S. House by Congresswoman Virginia Foxx.

David Johnson said her diligence goes beyond her time in the military.

When he was growing up, his mother worked two or three jobs, often waitressing and catering, in addition to being a teacher to keep her family afloat.

“We started out in this little house with no running water. We had to get well water, and we had an outhouse,” her son said. “I think it was amazing what she was able to do, how hard she worked, to get us out of that. She worked for everything she got.”

Elizabeth Johnson taught for 40 years — about 32 of which were spent in North Carolina school systems as a middle school teacher.

As a teacher, she always encouraged her kids and students to pursue higher education, her family said. After she retired, she continued to tutor and volunteer with local schools for another 10 years.

“From serving her country during World War II to impacting the lives of hundreds of students as a classroom teacher in North Carolina and Virginia, Elizabeth Barker Johnson is the embodiment of Winston-Salem State’s motto, ‘Enter to Learn. Depart to Serve,’” said WSSU Chancellor Elwood Robinson. “We are inspired by her and excited to give her the opportunity, 70 years later, to finally walk across the stage at commencement.”

Elizabeth Johnson has lived at the Hickory retirement community for the past eight years and keeps her mind sharp with crossword puzzles, word searches and reading, her son said.

David Johnson, who had a stroke and lives in a care facility in Granite Falls, said he doesn’t get to see his mother much and had promised to call her on her birthday.

Instead, he was the first person she hugged as she walked into the room full of loved ones. He plans to watch a live stream of her graduation from WSSU next week, he said.

Johnson said the day was chock-full of surprises from the family and friends who came to visit her.

“I’m just in sheer shock. How in the world did my daughter and granddaughters have time to pull this off?” she said. “This is the most wonderful birthday.”

A Winston-Salem park is getting upgrades. Crews begin work on pool, picnic shelter at Long Creek.

A former Winston-Salem police officer and his girlfriend were convicted Monday on child abuse charges involving the officer’s son. A Forsyth C…

A 50-foot-tall mural of an otter painted on the side of a Winston-Salem, N.C. water tank has won the national championship in a contest celebrating public water utility accomplishments. The tank is off Peters Creek Parkway on the south side of Winston-Salem.

No charges have been filed in the chain-reaction crash, which involved three cars.

Divorces would be quicker, alienation of affection suits a thing of the past under NC bill proposals

North Carolina is one of just six states — Hawaii, Mississippi, New Mexico, South Dakota and Utah are the others — that allow alienation of affection lawsuits.

ABOVE: Elizabeth Johnson blows out the candles on her cake during a surprise party for her 99th birthday Thursday at Pinecrest Retirement Community in Hickory.

LEFT: Johnson wears a Winston-Salem State University cap that she received as a gift to reveal that she will be walking with this year’s graduating class.

Two candles are lit for Elizabeth Johnson’s cake during a surprise party for her 99th birthday Thursday.

Elizabeth Johnson embraces her son David Johnson after she walks into a room full of family and friends for a surprise party thrown for her 99th birthday on Thursday.

Elizabeth Johnson wears a Winston-Salem State University cap and stoll that she received as a gift to reveal that she will be walking with this year’s graduating class during a surprise party for her 99th birthday Thursday.