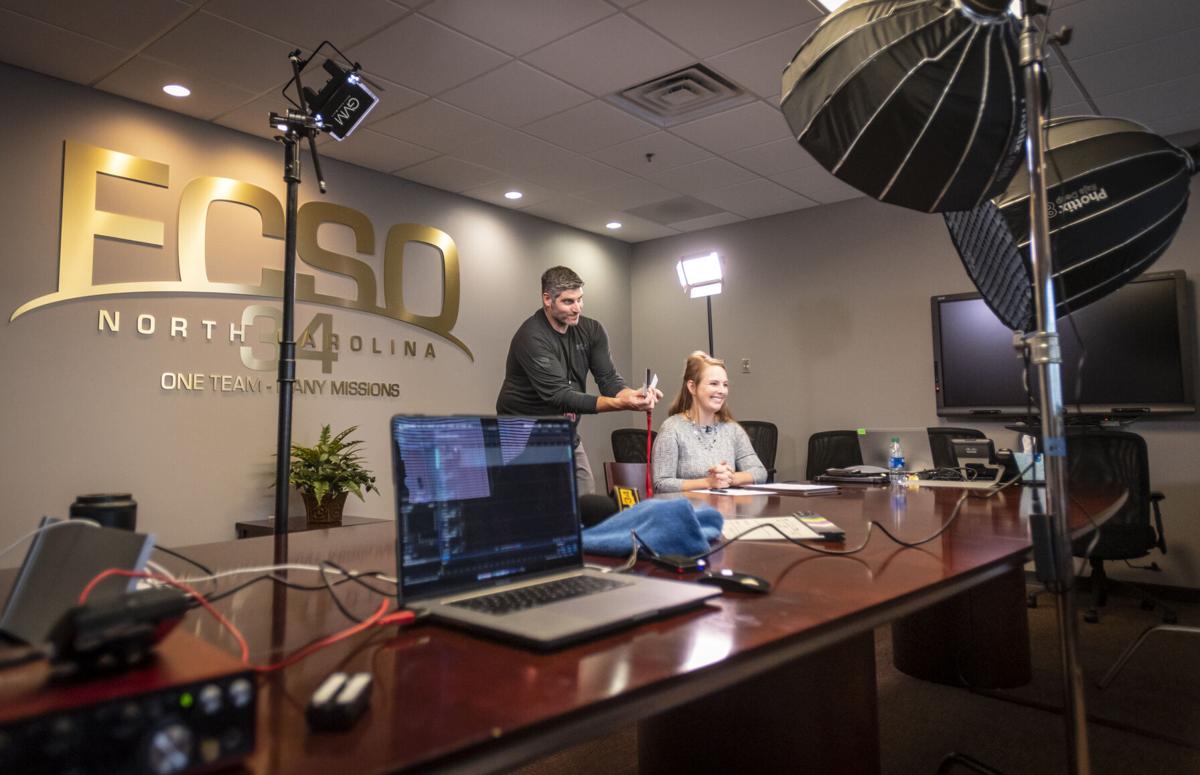 Hunter Laughlin, an independent photographer and videographer contracting for the sheriff's office, holds up exposure and color temperature cards prior to filming Christina Howell, public affairs officer with the Forsyth County Sheriff's Office, for a segment of FCSO 34 News on Thursday in Winston-Salem.

LaShanda Millner-Murphy, left, public relations manager with the Forsyth County Sheriff's Office, looks over a script for the department's online update, FCSO 34 News, with Christina Howell, public affairs officer, prior to taping a segment on Thursday. 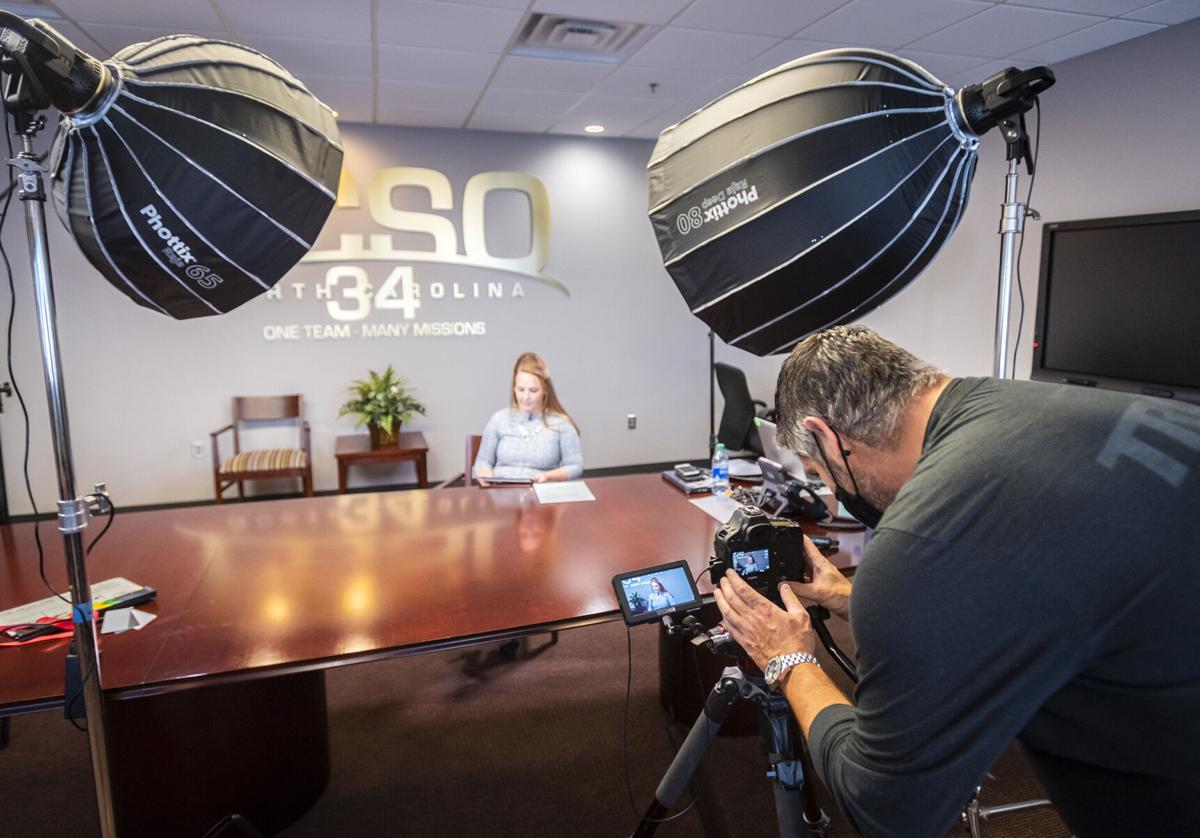 Christina Howell, public affairs officer with the Forsyth County Sheriff's Office, reads over her script as Hunter Laughlin, an independent photographer and videographer contracting for the sheriff's office, adjusts his camera.

The conference room, on the second floor of the Forsyth County Sheriff’s Office looks like any other. Long polished wooden table, a dozen or so chairs and a nice set of drinking glasses with a matching water ewer. No Dixie Cups or card tables here.

For the past few weeks, for an hour or so on Thursday afternoons, the smart conference room has been transformed into a makeshift television studio.

That’s when a pair of public-relations employees hired by Sheriff Bobby Kimbrough and an outside contractor film the intro for an online broadcast that mimics a TV newscast.

Some outside critics — professional, veteran observers of the changing media landscape — see it as the beginning of an imperial term in office, an end run around public accountability and tough questioning.

“No, no, no. It’s nothing like that,” Kimbrough said Thursday before the camera rolled. “It’s just a way to augment our existing communications, not replace anything we’re already doing.”

Others view it as a savvy new line of direct communication to voters (taxpayers) by law enforcement in a time when police tactics (and funding) are under increased scrutiny.

Whether the answer ultimately is found at either extreme — or somewhere in the middle — the weekly “FCSO 34 News: The Week in Review” broadcast, while not quite must-see TV, is something to keep an eye on.

At 12:30 Thursday afternoon, the onset of the traditional lunch hour in legal circles, new public-relations manager La Shanda Millner-Murphy and Christina Howell, a public-affairs officer, were making ready for the week’s taping.

Howell, who must have drawn the short straw, was rehearsing the intro for "The Week in Review." Hunter Laughlin, an outside contractor, was busy setting up gear. On Facebook, FCSO 34 News is billed as “News Straight from the Source”

“None of us have ever done news before,” Laughlin said while fiddling with audio and lighting. “We started watching the news a little closer and took it from there.”

Off to one side, Millner-Murphy, an image consultant before joining the sheriff’s office earlier this year, simultaneously supervised the production and fielded questions about the show’s content — and its intent.

“The mission is to make the public aware of what we do here at the Forsyth County Sheriff’s Office,” she said. “It’s another way to share with the community news about us.”

In 2015, then-Gov. Mike Pence of Indiana proposed the creation of an entire state agency called JustIn to do nothing but broadcast and produce “news” about the state government. A public uproar comparing the effort to state-run news in such places as North Korea and Cuba killed it before it got off the ground.

So far, FCSO 34 News has been as advertised — a week in review.

It has not featured interviews with Kimbrough answering tough questions about the death of jail inmate John Neville or a 13-year-old who died in a car crash last month following a high-speed chase initiated by deputies over an expired license tag.

Nor is the 30-minute broadcast a recitation of puff pieces along the lines of “Deputy Cuddly Rescues a Cat” or a mere three-dimensional employee newsletter.

“It’s broader than that,” Millner-Murphy said.

The latest edition, which dropped Friday, contained segments about a bomb threat in the Hall of Justice caused by a discarded insulin pump and the unveiling of a memorial to deputies killed in the line of duty.

The public knew about those things. Before tape rolled Thursday, though, Kimbrough mentioned in describing his job visiting a deputy sheriff earlier last week who’d crashed a patrol car and required medical attention.

His point that the job can be emotionally taxing and all-encompassing was well-taken. Still, The Week in Review had no mention of it, nor had the sheriff’s office mentioned in any official communications, that a deputy had been injured and a patrol car damaged.

And such omissions, intentional or not, as well as fielding questions about fault and cost, are something to watch.

“Sheriff’s departments are the least accountable law enforcement office there is,” said Kelly McBride, the vice president and chair of Newmark Center for Ethics and Leadership at The Poynter Institute for Media Studies, a nonprofit journalism school and research organization. “Sheriffs are elected and then only answerable four years later to voters. Not a city council, not a county manager or a board.”

After reviewing the first episode, which debuted on Facebook earlier this month, McBride said that, in her opinion, the broadcast “is clearly an attempt at creating a positive narrative that doesn’t have any accountability to it.

No one who pays attention to the sheriff’s office can say that Kimbrough is not visible. He is charismatic and so far, not shy about cameras or news conferences.

He held several after Neville’s death became public and met with protesters face to face. He frequently talks about transparency and has embraced 21st Century direct-to-consumers communications via Facebook and Twitter accounts.

It’s been an evolving strategy since being elected in 2018. Kimbrough has shifted money within his annual budget allocation by employing two public-information officers at a combined annual salary of $112,319.

According to Randy Hunsucker, the business manager for the sheriff’s office, one position was covered by the retirement of a crisis counselor (chaplain) and the other by replacing a previous public-information officer for a total savings in salaries of $16,000.

Laughlin, the contractor hired on an annual basis, is paid $49,999 annually. In addition to the FCSO 34 News, he handles still photography and video for social media, creation of designs/logos, brochures and photos of personnel and special events, Hunsucker said in an email.

Counting one contractor and two full-time employees, that’s an annual cost of $162,318 in salaries. County officials said there have been no additional costs for a set or production.

(By contrast, the Winston-Salem Police Department designates someone in the chief’s office, usually a lieutenant or a captain, to handle media requests. Or in the case of shootings or other high-profile incidents, a shift commander or a detective supervisor might answer questions.)

Al Tompkins, a senior instructor at Poynter, said that any increase in communication is worthwhile.

“There’s nothing inherently wrong with speaking directly to the people so long as it doesn’t replace accountability,” Tompkins said. “FDR held fireside chats that were reassuring in a troubled time.

The questions viewers (taxpayers) need to ask themselves, Tompkins said, are straightforward.

“What are the taxpayers paying for it and what do they get for it? Is it something that adds to the sheriff’s stated mission of protecting public safety? Or is it chest-thumping?

Kimbrough said he sees the increased emphasis in public relations and communications as necessary.

“With everything that goes on around here, we’d be having a press conference every other day,” he said.

The sheriff said he’s never ducked responsibility and never will.

For proof, Kimbrough cited his handling of Neville’s death. At a news conference earlier this summer in which criminal charges against detention officers (and a contracted nurse) were announced, he admitted that “mistakes were made.”

“I’m never going to run from the truth when we’re wrong,” he said Thursday. “I’m the first one to say so when we make a mistake. And I did.”

For the foreseeable future, FCSO 34 News will continue to be shown via social media accounts. There will be occasional glitches such as during Thursday’s taping when a live feed was picked up on a speaker down the hall where taser training was taking place.

Judgment over the finished product ultimately will be rendered by Forsyth County residents who pay for it.

“If it’s not adding anything, why do it?” Tompkins asked. “If all it’s doing is making you feel better about (the sheriff), what’s the value in that?”

DETROIT - A Michigan woman says she woke up to someone urinating on her while she was on a Delta flight home to Detroit from Las Vegas. That s…

A former Republican state legislator was charged with assaulting an election worker at a Wake County early voting site on Friday morning.

Actor Sam Elliott lent his voice to a Joe Biden campaign video that aired during the World Series Tuesday and became a Twitter magnet. See the ad and responses to it.

Hunter Laughlin, an independent photographer and videographer contracting for the sheriff's office, holds up exposure and color temperature cards prior to filming Christina Howell, public affairs officer with the Forsyth County Sheriff's Office, for a segment of FCSO 34 News on Thursday in Winston-Salem.

LaShanda Millner-Murphy, left, public relations manager with the Forsyth County Sheriff's Office, looks over a script for the department's online update, FCSO 34 News, with Christina Howell, public affairs officer, prior to taping a segment on Thursday.

Christina Howell, public affairs officer with the Forsyth County Sheriff's Office, reads over her script as Hunter Laughlin, an independent photographer and videographer contracting for the sheriff's office, adjusts his camera.