Historic photos of the Carolina Hotel, before the 1980s renovation

The Senate voted 40-8 Tuesday on second reading of Senate Bill 105 with both Forsyth delegation members — Republican Joyce Krawiec and Democrat Paul Lowe — in support. The third reading of SB105 in the Senate, as well as the first House vote, are scheduled for Wednesday.

The first phase of the Stevens Center renovation project has made it into the final Republican legislative bill with a $25 million pledge. UNC School of the Arts owns the 77,500-square-foot Stevens Center in downtown Winston-Salem.

The submitted budget also provides $5.7 million in the 2021-22 budget year and $14.2 million in fiscal 2022-23 toward the capital project for Williams Auditorium at Winston-Salem State University. The overall cost of that project is listed at $57 million.

WSSU could not be immediately reached for comment about the project. Lowe said the auditorium “needs “dramatic updating to get the best use out of it for performances and as an economic engine.”

Cooper said he plans to sign the budget bill, saying “because, on balance, the good outweighs the bad. It moves North Carolina forward in important ways, many that are critical to our state’s progress as we are emerging from this pandemic.”

“While I believe it is a budget of some missed opportunities and misguided policy, it is also a budget we desperately need at this unique time in the history of our state.”

The proposed 2021-23 state budgets also include $4.8 million toward the Stevens Center’s roof, repair of water intrusion and other building projects for a total funding commitment to the facility of $29.8 million.

That represents 75% of the budgets’ appropriation for UNCSA.

UNCSA said that Phase 1 includes “establishing the final scope of work and the budget, as well as design development and the beginning of the construction process.”

“We expect the state funding will be received over multiple years, and we’re hopeful for the continued support of the legislature and the community as the project moves forward.”

UNCSA chief of staff Jim DeCristo said in a statement that “while the budget has not been finalized, we remain optimistic that state legislative leaders share our vision for the historic Stevens Center.”

DeCristo said the center “serves as our largest learning laboratory, an economic driver for downtown Winston-Salem, and a cultural destination for both residents and visitors.

“The Stevens Center remains our top capital priority, and we are grateful for the support of our Forsyth County delegation, who recognizes the importance and potential for the landmark property.”

Rep. Donny Lambeth, R-Forsyth, said Tuesday, that providing state funding for the Stevens project has been a high priority for him since he arrived in Raleigh.

“I and the local delegation worked with the School of the Arts, and it was consistently their top priority for state support.”

A state House bill was revived in February to provide $42.2 million to renovate the center. Bipartisan House Bill 131 was submitted by the Forsyth County House delegation.

Given that HB131 was never heard in committee, it likely was submitted to offer a framework for inclusion in the state budget proposal.

“It is long overdue for a major renovation to bring it up to current performing standards in order to continue to utilize the variety of performances we all love and appreciate,” Lambeth said.

In September 2017, UNCSA’s board of trustees approved a master renovation plan for the Stevens Center.

“We can’t count on state funding alone to cover the costs,” UNCSA officials said in September 2017. “We’ll only get this done as a public-private partnership.”

Construction and other items, including furnishings, new rigging systems, lighting and audio/visual equipment, were projected at the time to cost $35.2 million.

Renovations to the 10-level building would include a second balcony and the elimination of some seats. The overall renovations are expected to take 18 months.

The current seating capacity of the Stevens Center is 1,366.

The plan would reduce seating to 1,024 seats, but increase two levels of seating to three, including a “necklace-style” mezzanine composed of modular boxes, providing more leg room and street-level access to orchestra-level seating.

The public money would be spent on significant upgrades to plumbing, mechanical, electrical and life-safety systems, theater sound, lighting and stage equipment.

House Bill 664, titled “HBCU Success Act” for the current session, lists an appropriations request for a projected $57 million price tag for Williams Auditorium, which seats about 1,600.

The bill has not been heard in committee since being introduced in April.

Senate Bill 640, titled “Post-COVID-19 development funding,” focused solely on the Williams capital project. That bill has not been heard in committee.

Similar to the UNCSA House bill, HB664 and SB640 may have been submitted to serve as a template for inclusion in the state budget.

The bulk of the money is going to Hauser Hall, with $9.5 million going to the “Restore the Core” initiative, along with $7.5 million being dedicated to Phase II of its renovation.

Other projects include $1.45 million for HVAC and other upgrades to the Elva Jones Computer Science building; $750,000 for a campus-wide fire alarm system upgrade; and $660,000 for replacing the roof on the Gains Complex.

A similar Stevens Center funding effort was included temporarily in the 2019-20 state budget.

In June 2019, however, the center became a victim of political hardball.

“The House leadership asked for the entire Forsyth County delegation to be in full agreement ... and support the budget,” Lambeth said at that time.

“Only three of the five members of the delegation were in support of the budget and conference report, so funding was deleted.”

Former Rep. Derwin Montgomery, D-Forsyth, said he and Democratic Rep. Evelyn Terry were told by House leadership in 2019 that funding for the renovations was conditional not only on support for a budget compromise, but also for overriding a potential veto by the governor.

The Stevens Center money cleared just one of four committees during the 2019-20 session.

Lowe said he views the bipartisan support for the Stevens and Williams renovation projects as a “sign of goodwill” among the parties and another example of where the Forsyth delegation can find common ground.

“We kept pushing those both projects to be included during budget conference meetings because we believe the community will benefit from a modern look and offerings,” Lowe said.

Krawiec said “I’m delighted that we were able to include this generous funding” for both projects.

Photos: Transformation of the Stevens Center

Before it was the Stevens Center: The Carolina Theatre and Carolina Hotel

Historic photos of the Carolina Hotel, before the 1980s renovation 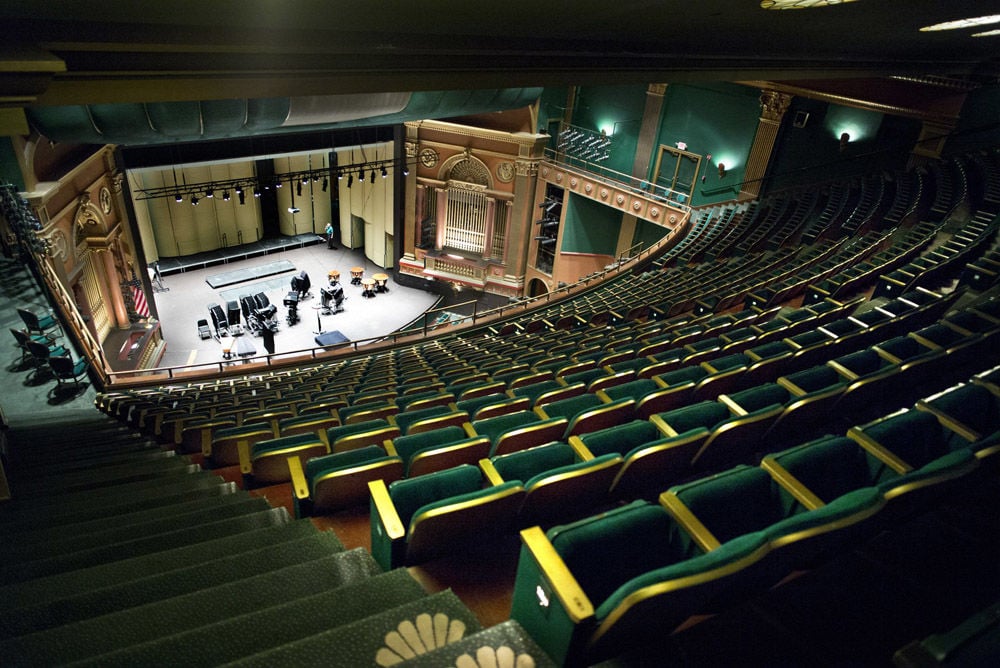 The Stevens Center would get $25 million from the 2021-23 state budget toward a major renovation of the facility. 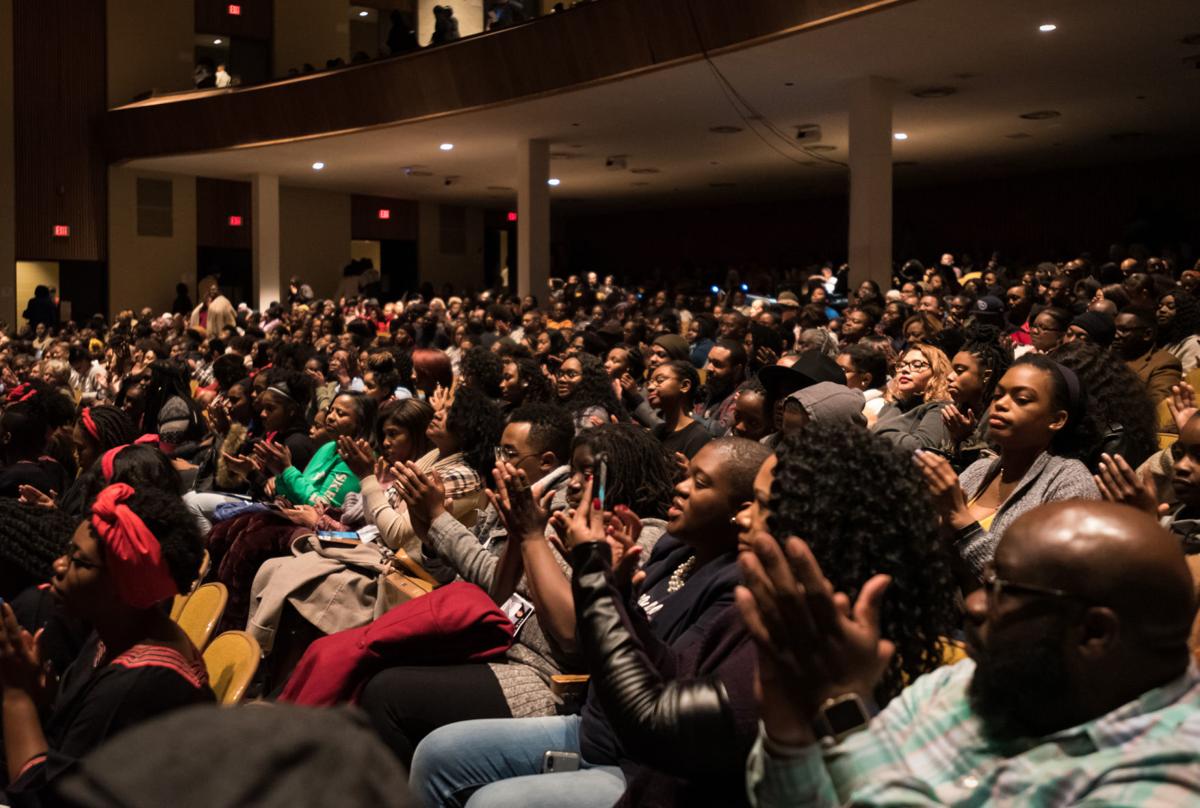