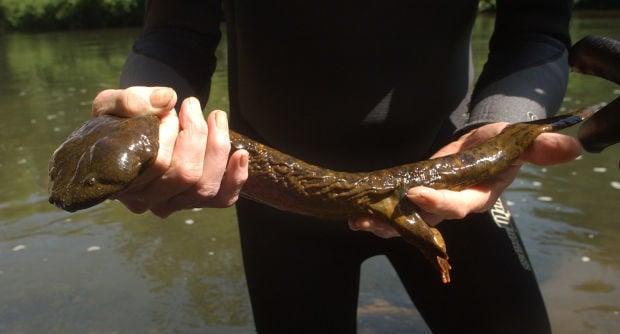 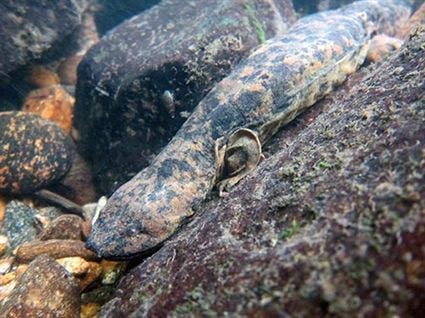 Hellbenders are neither venomous nor poisonous, according to the N.C. Wildlife Resources Commission.

But they should be reported, officials say.

That's because the North Carolina Wildlife Resources Commission wants to learn more about the mysterious critters, which are both considered a "species of special concern," and how they're faring in the state, the agency said Wednesday.

"We know less about mudpuppies than we do about hellbenders, but we'd like to know much more about both," Lori Williams, a wildlife diversity biologist with the agency, said in a news release.

Hellbender populations have been declining, mostly because of habitat and water quality degradation, but partly due to anglers believing they harm trout populations.

"The latter is not true; however, both hellbenders and mudpuppies may go after fish on a line or stringer when scavenging for an easy meal," the wildlife commission said.

The agency said it has been monitoring hellbender populations since 2007. But "challenging logistics in lake systems" has made keeping tabs on mudpuppies more difficult.

"But those habitats may be hot spots," Williams said. "They are attracted to baited hooks in lakes and deep rivers, so anglers fishing from boats may catch one. We need anyone who fishes deep river sites and impounded waters to let us know if they find one."

Those who spot a hellbender or mudpuppy can send the location and a photo to Lori.Williams@ncwildlife.org or call the commission's NC Wildlife Helpline at 866-318-2401.

"If anglers happen to catch one on by hook and line, they should carefully remove the hook if it is safe to do so without harming the animal, or cut the line as close as possible to the hook and return the salamander back to the water," officials said.

The salamanders are not poisonous or venomous, and they aren't harmful to humans. But they might try to bite out of self-defense if bothered.

"If sighted, they should be left alone and reported," the wildlife agency said.

The two species have some similar features, but officials say there are several ways to tell them apart.

Mudpuppies are smaller, averaging about 10 inches in length as an adult. Meanwhile, hellbenders are the largest aquatic salamanders in North America and average between 16 and 17 inches in length.

"The mudpuppy has light brown, smooth skin, red external feathery gills they retain through their whole lives, and it typically has spots," the agency said.

The species is typically found in "deep rivers, lakes, large ponds and reservoirs," officials said. But both mudpuppies and hellbenders thrive in unpolluted streams.

"It is typically only found in fast moving, clean mountain stream," the agency said.

The NCWRC is also reminding the public that it's illegal to "take, possess, transport or sell mudpuppies or hellbenders, or attempt to do so."

"A violation is a Class 1 misdemeanor, which can result in a fine and up to 120 days in jail," officials said.

In some aspects, NASCAR has come to realize what many fans have known for a long time — a good part of its future lies in its past.

Janique Ebanks of Concord thought she'd been scammed. The caller said she'd won the $100,00 prize in the 2021 Multiply the Cash Second-Chance …

Apr. 8—Wake County has paused its COVID-19 vaccination clinic at PNC Arena after "a number" of patients had adverse reactions to the Johnson & Johnson vaccine on Thursday, a county spokeswoman told The News & Observer. Stacy Beard, the county spokeswoman, did not immediately know how many people had the reactions, but said that staff wanted to pause for the day "out of an abundance of ...

Is that yellow dust going to kill you? Everything you need to know about pollen in N.C.

Apr. 9—There is an actual haze over North Carolina cities this spring as the state is in the midst of its annual release of pollen. If you're one of the people who suffers itchy eyes and a runny nose, going outside right now could be a challenge. There are steps you can take to avoid the worst impacts of this annual event, though. Here's everything you need to know. When is pollen the worst? ...

UNC-Chapel Hill is getting closer to renaming three campus buildings that were named for individuals with ties to white supremacy and racism.

WFMY-Channel 2 said one of its reporters was preparing for a live report downtown when a woman approached, startling the reporter, then threatened the reporter and spat on her face shield.

A second lieutenant in the U.S. Army is suing two Virginia police officers over a traffic stop last December during which the officers drew th…

Hellbenders are neither venomous nor poisonous, according to the N.C. Wildlife Resources Commission.