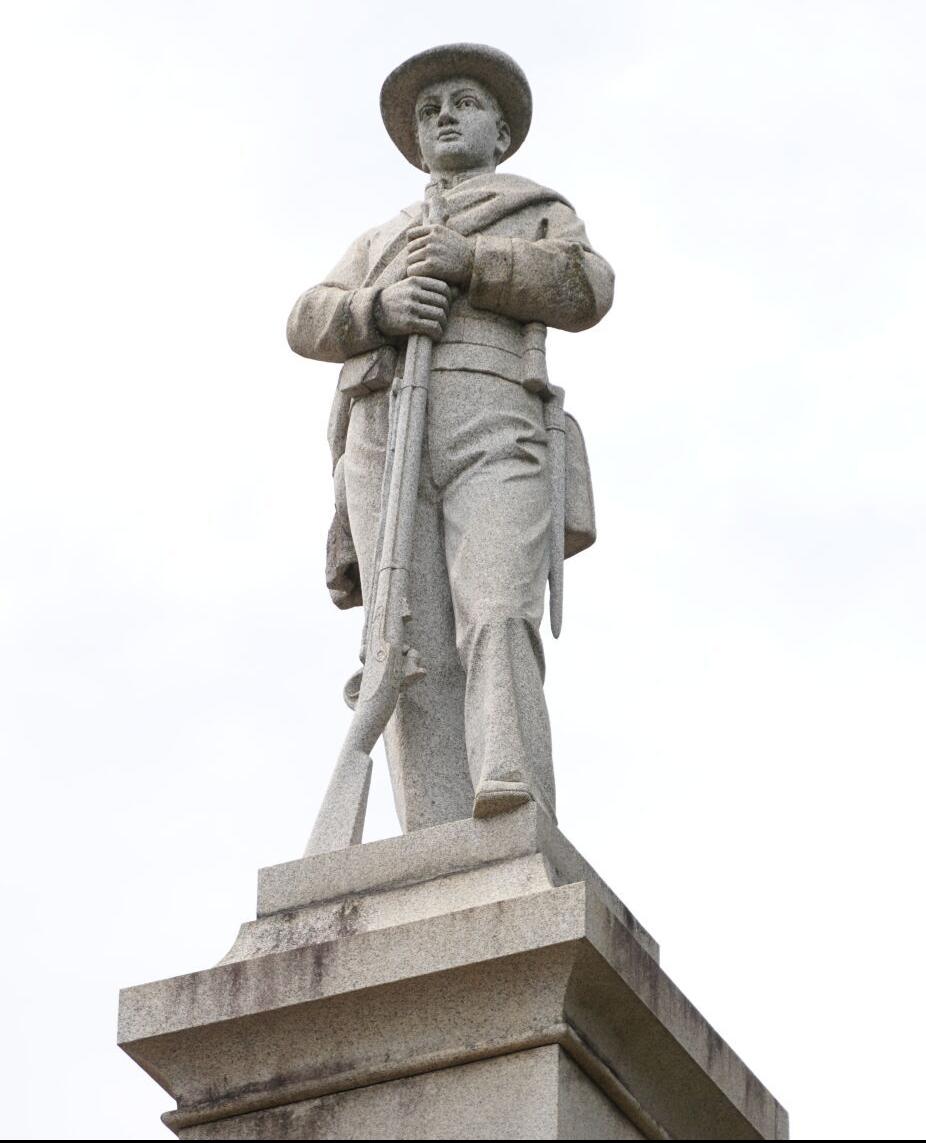 A Confederate soldier stands atop the monument in Salem. 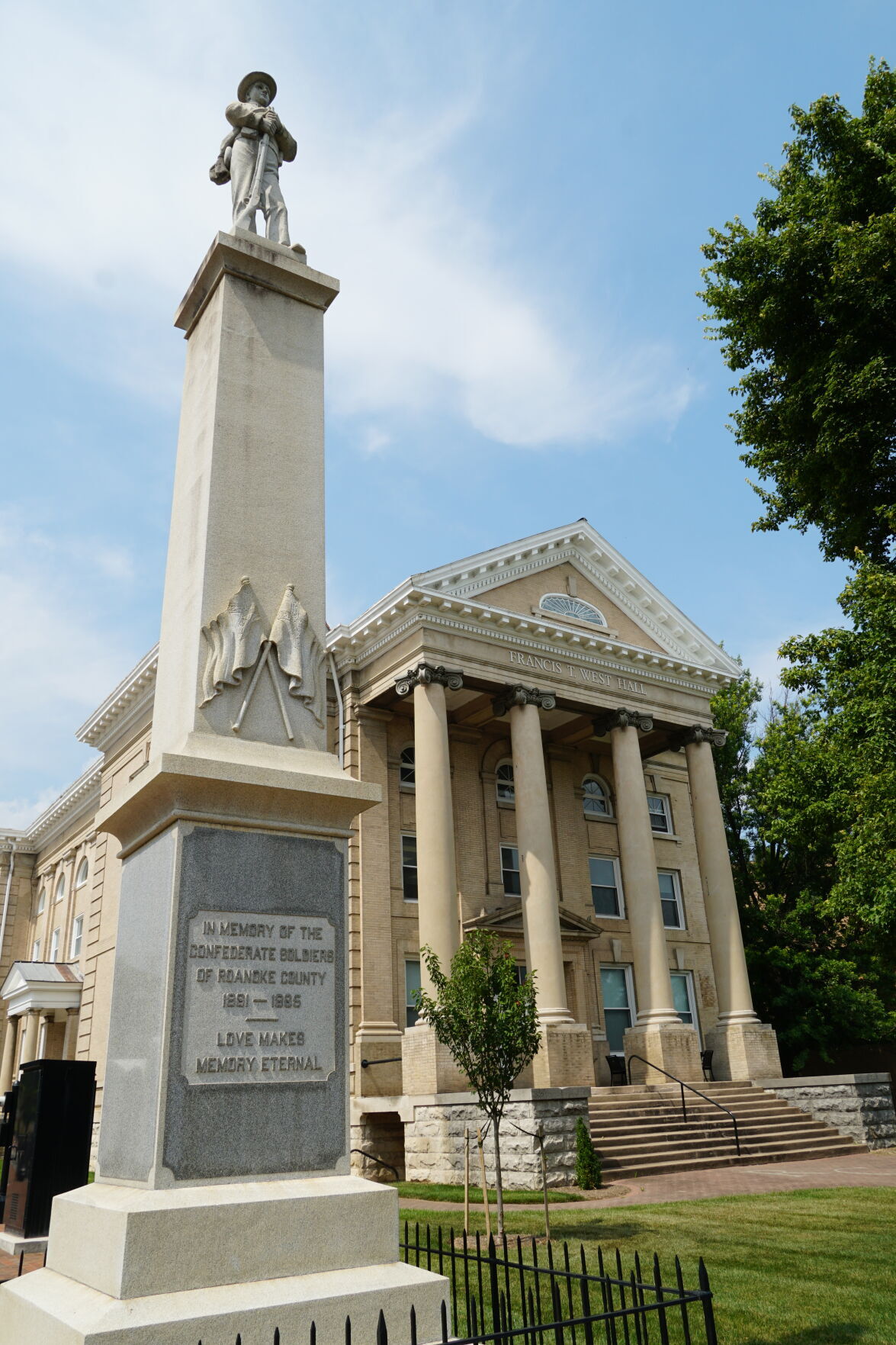 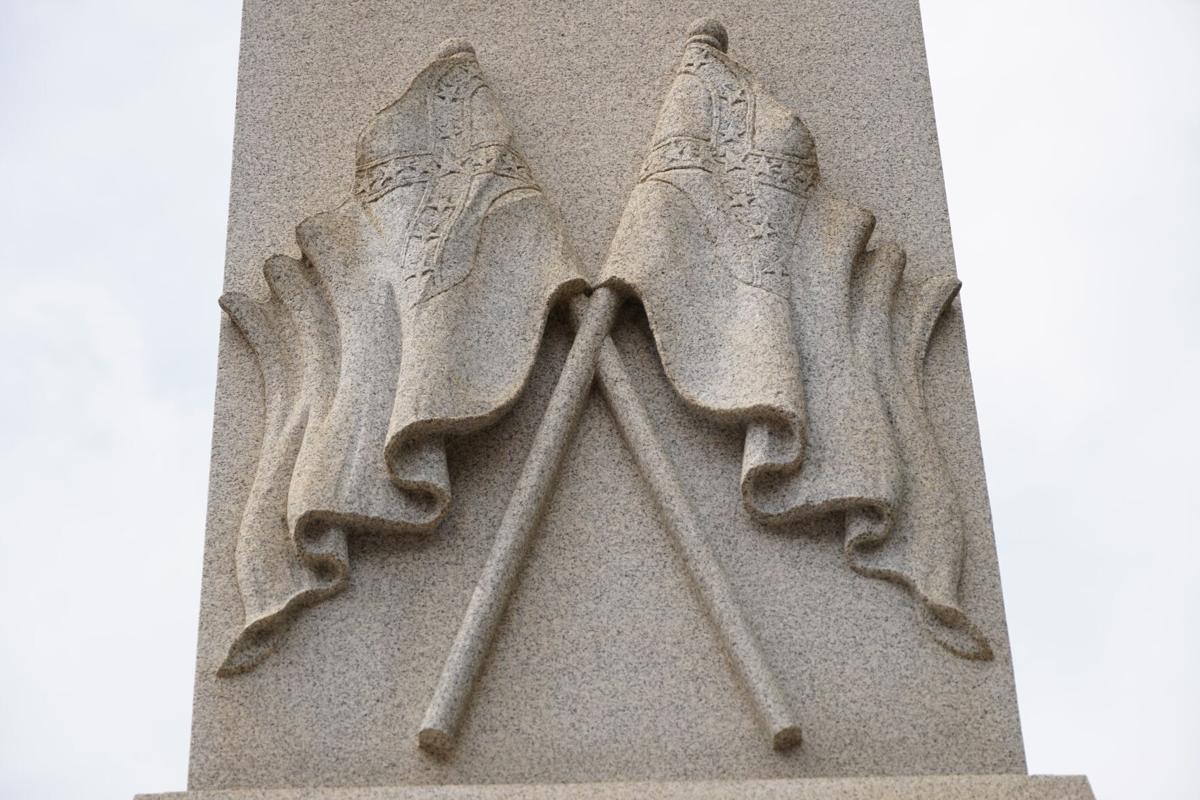 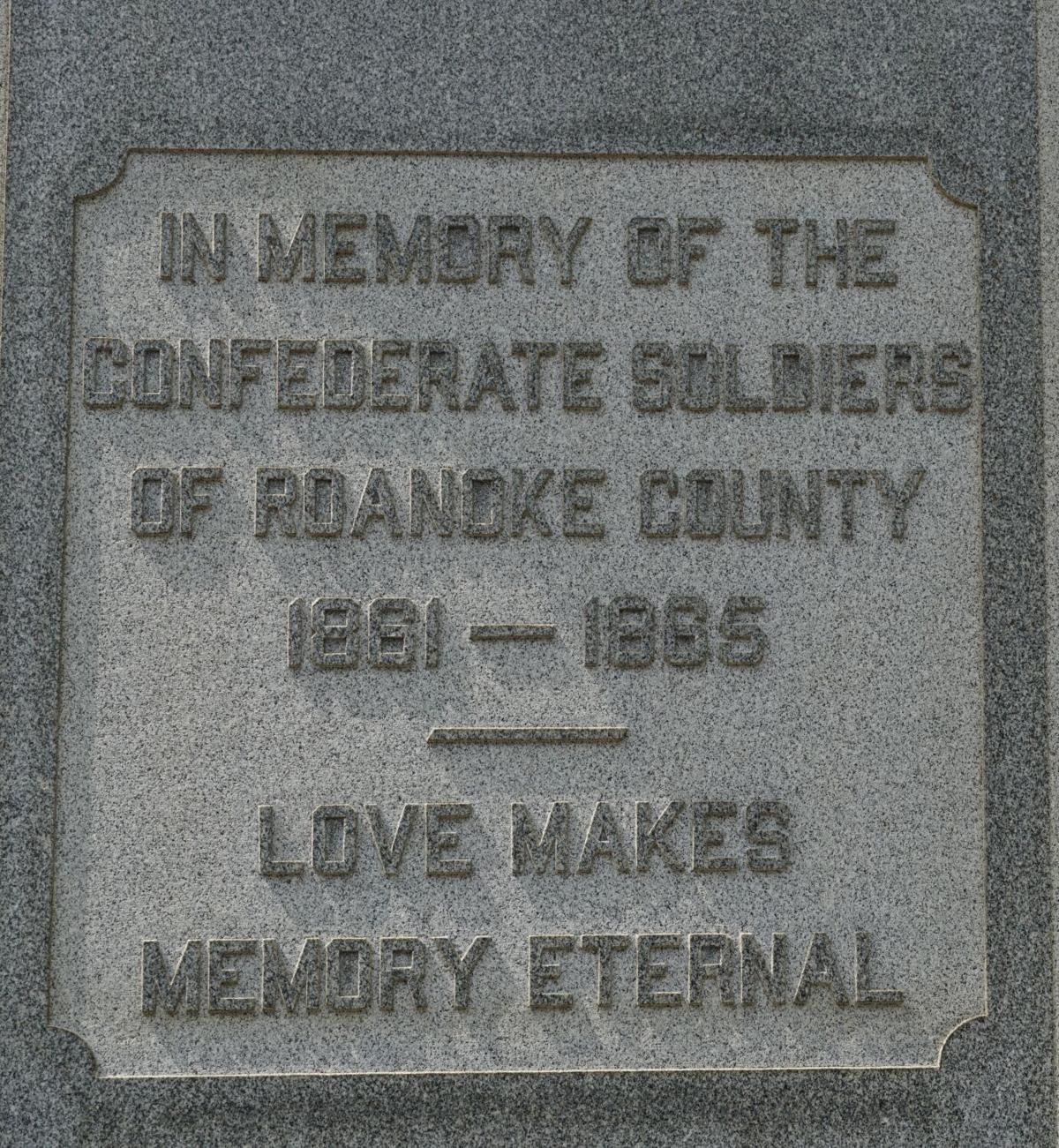 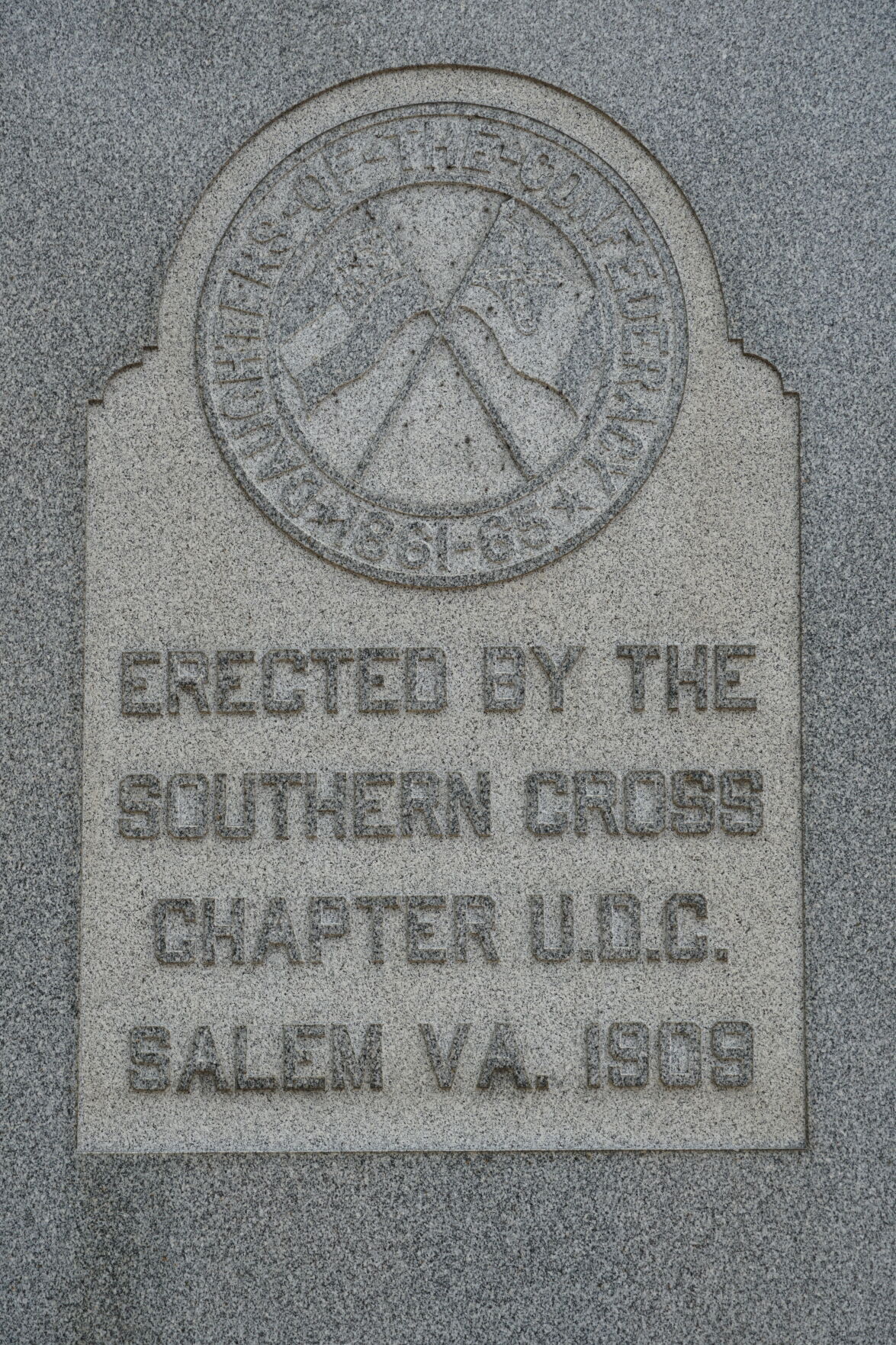 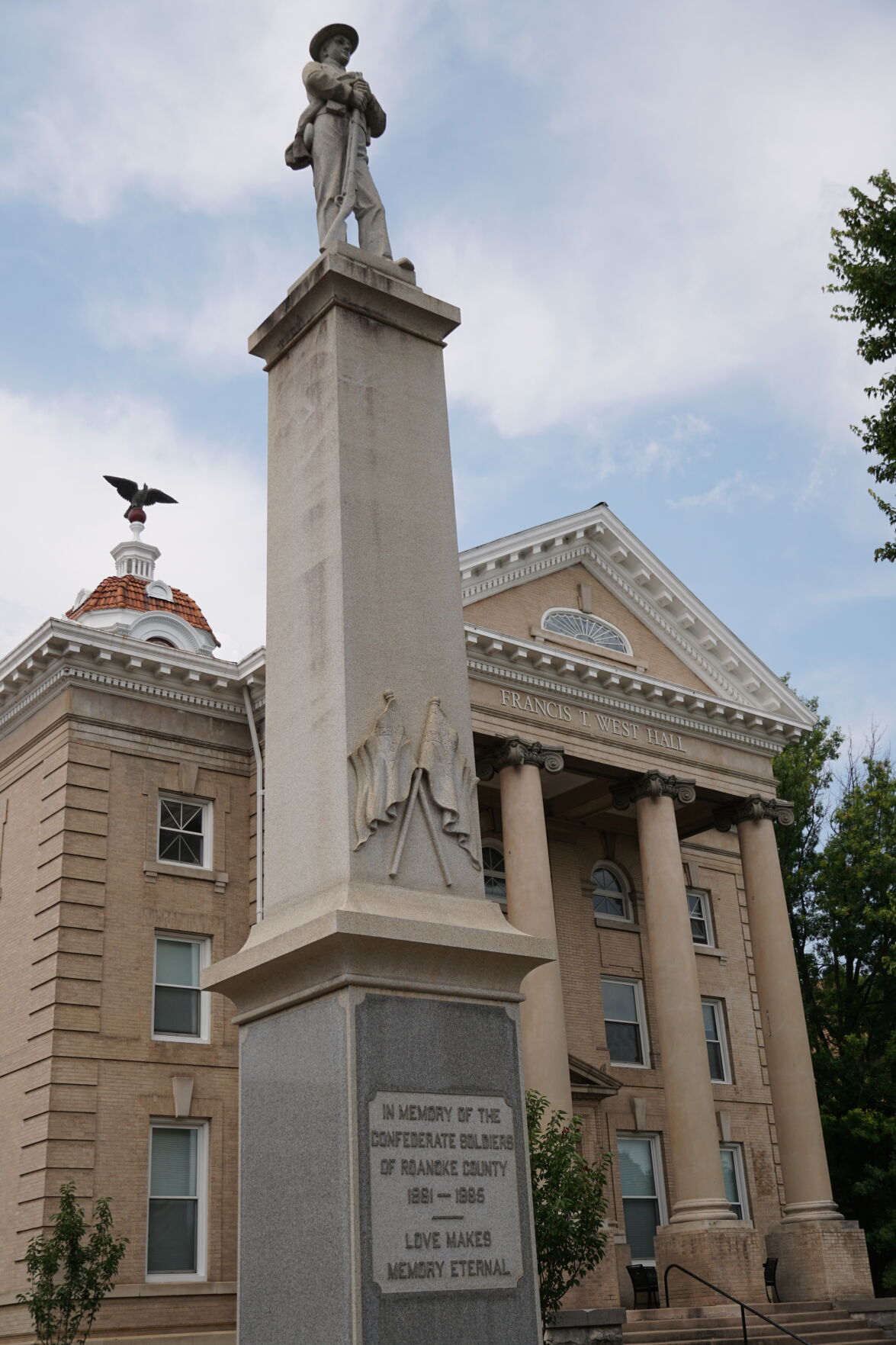 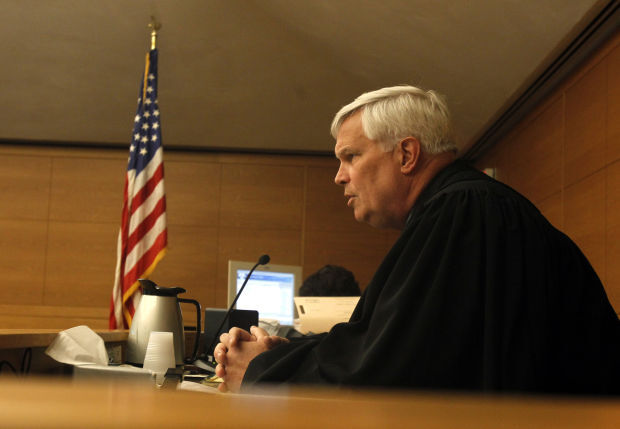 If it is to properly administer justice, either Virginia's historic Roanoke County Courthouse building must move or the Confederate monument out front should go, according to the order of a circuit court judge.

“The lesser hardship of these two options” is the removal of the Confederate monument, wrote Judge Charles Dorsey in an order from Roanoke County Circuit Court, dated July 8. “Any inconvenience in accomplishing this goal is small compared to the rights involved in the administration of justice.”

Roanoke County’s Board of Supervisors is now charged to act on the statue, which depicts a Confederate infantryman. The board is aware of the order, said Chairman Jason Peters during a phone call Monday.

“We want to evaluate all of our options before we make our decision,” Peters said. “All of us, as board members, have received much more support for the monument than against it.”

United Daughters of the Confederacy erected the monument in 1909, according to an etching on the back. The infantryman stands about 18 feet above street-level on the corner of Salem, Virginia’s Main Street and College Avenue, located outside the historic Roanoke County Courthouse that opened in 1910, according to a county spokesperson.

“Ultimately this is a monument for the people of Roanoke County … we need to do our due diligence,” Peters said. “There was some conversation started, maybe in 2019. Of course, then COVID hit and all conversations about everything stopped.”

Roanoke College now uses the old courthouse, adjacent to the current one, for business, economics, public affairs, religion and philosophy classes. The college has offered to fund the statue’s relocation, but it rests on a county easement that requires board approval to move.

“If we’re forced to remove the statue, I still think that the majority of us want to have something in place to say the historical meaning of that spot,” Peters said. “It’s a very significant spot, because that is truly where soldiers came to sign up, at that that very spot, and many of those soldiers came from Roanoke College.”

Regardless, the public will need involvement in the decision-making process, either by way of a hearing or a referendum, said Roanoke County Attorney Peter Lubeck during a phone call Monday. The Virginia Department of Historic Resources is expected to release guidelines for contextualizing statues and monuments sometime in September, in response to a state law changed in April 2020, he added.

“In our society we are plagued by intolerance of opposing viewpoints,” Lubeck said. “While people do have strong opinions regarding monuments, I think what the board hopes to achieve — through whatever course of action it chooses — is to do its best to achieve unity.”

The court will not take further formal action on the statue until Jan. 2, 2022, according to the order. But in an attached letter that Dorsey penned to Peters dated June 23, he urged hasty removal of the stonework, for the sake of judicial optics.

“There is a legal, intellectual, and moral imperative to move this statue with all deliberate speed,” Dorsey wrote.

In his letter to Peters, Dorsey said no one would suggest a Confederate flag or monument has any place in a courtroom.

“The meaning conveyed by this statue due to its proximity to the Roanoke County Courthouse and being on Roanoke County property is, likewise, completely antithetical to the proper administration of justice,” Dorsey wrote. It matters not who is offended; “it only matters that this monument’s message, in its present location, is offensive to the appearance of judicial fairness and neutrality, without a hint of prejudice.”

Citing several historians, Dorsey noted slavery was, by a wide margin, unquestionably the primary cause of the Civil War. Confederate monuments are “tied to the mythology of the Lost Cause — the way many white Americans have chosen to view history following the Civil War,” Dorsey wrote.

Dorsey, who attended Roanoke County Public Schools, said even though it is more often than not frustrating, he is proud of the innate stubbornness Southern people have on matters near and dear to them. But that stubbornness must yield to reason and conscience, he wrote:

“In order to make this part of the judicial system of Virginia more legitimate to all of those whom we serve, this small statue with its large, ugly message must be removed.”

In the NC county where the COVID rate is highest, vaccine acceptance is a slow struggle

The Republican-sponsored legislative bill that threatens the existence of the N.C. High School Athletic Association seemed to come from way be…

Rep. Madison Cawthorn tried to carry a gun onto a flight at NC airport in February

Whitney Houston’s legacy lives on in Nashville, thanks in part to Dolly Parton and an iconic song she wrote in 1973.

NC 4-year-old dies after shooting himself in the head. He found the gun underneath a couch cushion, High Point police say.

The homeowner and the boy's mother are now facing charges in his death, police say.

After cyberattack on police computers in Bristol, thieves appear to be selling stolen information on the dark web

BRISTOL, Va. — Cyber criminals conducted a ransomware attack on the Bristol Virginia Police Department’s computers earlier this year and now appear to be trying to sell information on the dark web.

The resolution sets out a 10-point plan that includes the implementation of new laws and policies; public outreach; partnerships with community groups; and anti-racism training for city officials and employees.

Jul. 26—In 2018, Lexington Tourism Authority Director Robin Bivens was in Dublin, Ireland, on a personal vacation when she learned just how far the reputation of her small hometown and its unique barbecue had spread. Sitting in the lobby of her hotel, she struck up a conversation with their tour guide. He asked Bivens what she did for a living and where she lived. When "Lexington, N.C.," ...

A Confederate soldier stands atop the monument in Salem.