Subscribe
Read Today's E-Edition
Share This
WATCH NOW: ESPN's 'College GameDay' bus stops in Hickory on way to Boone. 'A little bit of our due,' says one fan.
0 Comments
Share this

If the game had turned out differently last Saturday, the bright orange bus for ESPN’s “College GameDay” would be en route to College Station, Texas, this week.

Instead, the bus was bound for Boone on Thursday with a stop at App State’s Hickory campus along the way, said Troy Tuttle, who works in communications for Appalachian State University.

The Mountaineers changed those plans with their 17-14 upset victory over the Texas A&M Aggies.

None of the show’s hosts were in Hickory on Thursday morning but the presence of the bus parked along 17th Street NW drew a small crowd, some wearing App State’s gold and black and some in attire featuring the university’s logo.

This will be the first time ESPN’s college football pregame show has come to Boone. Country singer Luke Combs, who attended App State, will serve as the guest picker. The show is broadcast from 9 a.m. to noon on Saturday.

“The show decided to go to Boone because App State is the story of the week in college football,” “GameDay” producer Drew Gallagher said. “Of all the games and possible sites for the show on Saturday, App State’s current relevance as a giant killer combined with a passionate, college football-crazed fan base made the decision a no-brainer.”

University leaders heralded the national spotlight on the university, with Chancellor Sheri Everts calling it “unparalleled in our university’s history” and adding that it “brings with it prestige and recognition for the entire App State campus.”

The university has announced a poster contest in conjunction with the “GameDay” broadcast. The winner of the contest will be announced during the broadcast and will receive a one-year break from tuition and fees.

Fans of the team also spoke of the significance of being featured on “GameDay.”

“We’ve had a chip on our shoulder due to lack of recognition, we feel like, for a long time and this feels like we’re finally getting a little bit of our due,” said Hickory resident Ross Rogers, an App State alumnus and season ticketholder who came to see the “GameDay” bus Thursday morning.

“It’s like, this is what college sports is about is a team like us, that, you know, we’re a little mountain school but we can hang with anybody that we play and it’s awesome that we’re getting that national recognition finally,” Schantz said. “I feel like they should have been here five years ago.”

Schantz was part of the large crowd of the students who took to the streets of Boone last weekend to celebrate App’s victory. He described seeing large groups of students converging on King Street, the main thoroughfare in downtown Boone, and marching to Kidd Brewer Stadium.

Unlike the celebration after the team’s 2007 upset win over Michigan, the goalposts did not leave the football field.

The group went down the hill and students began jumping into the school’s Duck Pond. Some of the revelers destroyed a sculpture in the pond.

Schantz said he was among those who dove into the water but did not jump on the sculpture.

“I had to feel the moment, you know?” Schantz said. He added: “I don’t know if it was because of the adrenaline, it was not that cold. It wasn’t warm by any means but I was so hype that I really wasn’t that cold.”

Another senior, Gabby Defeo, was also among the crowd that night, though she said she did not go into the pond.

Defeo also talked about the scene on King Street, with students chanting and waving flags, honking in the distance and fireworks going off in the air.

“This is the biggest celebration I’ve ever experienced,” Defeo said. “Like, I had chills the whole time. It was crazy. I was just like soaking in the celebration because it was just so cool seeing the community come together for such an important win.”

Even before the victory over Texas A&M and recognition from “GameDay,” football weekends brought an influx of visitors to the mountain town.

Michelle Hood, manager of Black Cat Burrito in downtown Boone, said Saturday would likely be a busy day for the restaurant and noted that Boone has seemed to attract more and more people to the town. “It’s definitely a positive thing I would say because it brings in the crowd but people can definitely get a little rowdy,” Hood said. “But that’s OK. We accept them.”

She also noted some downsides to the fervor around football, citing incidents like the destruction of the artwork in the pond.

“I think it really does do some damage to this town, like respect-wise and destruction-wise,” Hood said. “I think people just tend to get out of hand when it comes to football.”

Kevin Griffin is the City of Hickory reporter at the Hickory Daily Record. 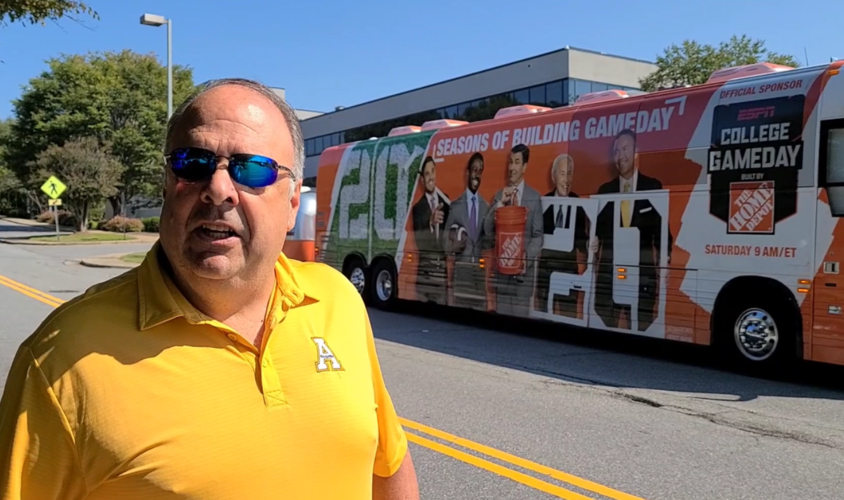 Ross Rogers, a Hickory resident and Appalachian State University alumnus, said he is pleased with the recognition the university is receiving from ESPN’s “College GameDay.” Rogers came out to see the “GameDay” bus Thursday during its stop in Hickory. 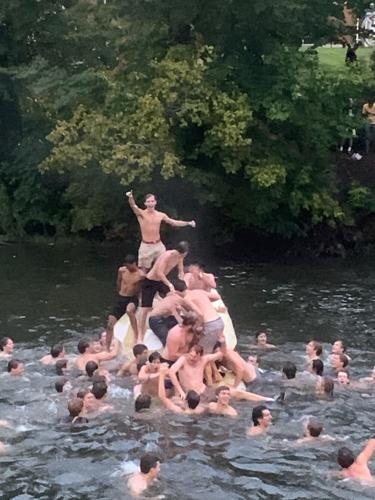 Several people celebrating App State's win over Texas A&M climbed on top of a sculpture in the middle of the Duck Pond, tearing it apart. 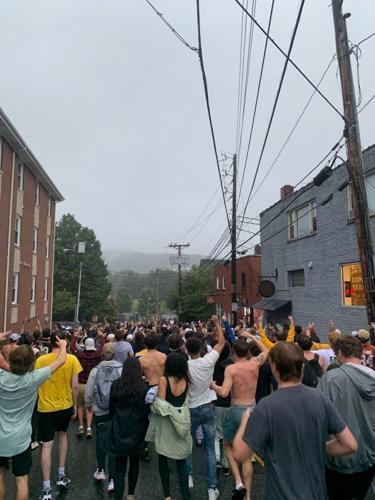 Hundreds of students and App State fans took to the streets last Saturday to celebrate the football team's upset victory over Texas A&M.