A small corner of the time capsule’s lid had been pried open, and conservator Kate Ridgway inserted a small endoscope, shining light on historical artifacts that had been hiding for 130 years.

The camera's images appeared on her phone and revealed a stack of books. It was another piece of mounting evidence suggesting this wasn’t the time capsule described in the 1887 newspapers.

A three-woman team of conservators at the Department of Historic Resources spent more than five hours carefully opening and examining the lead box and its contents that were discovered Friday in the stone base that once held the city's famous Robert E. Lee statue.

Using a micro spatula with a chisel tip, they painstakingly pried the lid from the walls. Then Gov. Ralph Northam lifted the top, looked up at the swarm of cameras and expressed a look of amazement.

The box was indeed a time capsule. But it wasn’t the time capsule they expected. While one mystery had been solved, another one persists.

For years, historians have believed a time capsule was placed under the 40-foot granite pedestal that held the Lee statue. Newspapers in 1887 chronicled the assembly, placement and the 60 artifacts contained within it. One item in particular caught the eye of historians — a potentially rare picture of Abraham Lincoln in his coffin.

Newspaper accounts say the capsule was put in the statue’s cornerstone, and in September, a masonry crew spent 12 hours looking for it in the plinth’s northeast corner. They looked in the northeast because Masonic tradition indicates that’s where time capsules were placed.

They never found it.

Virginia Gov. Ralph Northam announced this month the pedestal would be taken down, and two weeks ago, the masonry crew returned and began disassembly.

On Friday, at 7:11 a.m., they discovered a box inserted into a 1,500-pound stone halfway up the pedestal. Though observers initially believed it was the 1887 time capsule, inconsistencies started to arise: the location wasn’t right, and the size didn’t match. Newspaper accounts said the time capsule was 14 by 14 by 8 inches. This one was 11.5 by 8 by 4.

The material of the box wasn’t right either. What they had in their possession was lead. The box described in the newspaper was copper.

And there was no inscription written on the side, as the newspapers had said.

Once it was opened, officials realized the contents didn’t match historical accounts either. Historians had called the newspapers time capsule’s items Confederate propaganda, yet another way of the south thumbing its nose at Lincoln and the Union.

Inside this time capsule was an homage to the pedestal’s builders.

The contents of the box include:

• The book “Huguenot Lovers: A Tale of the Old Dominion,” published in 1889 and written by Collinson Pierrepont Edwards Burgwyn, who designed the circle where the statue was built.

• A series of papers in an envelope containing maps or diagrams with the title “Natural advantages and waterpower facilities of the city of Manchester and the County of Chesterfield.” Burgwyn’s name is on the cover page.

• An image of a man, with the words "James Netherwood master stone mason" written in hand on the back. Netherwood supervised the construction of the pedestal. Below the image are the printed words "Virginia Art Studio 525 E. Broad Street."

• A softbound book resembling a ledger that wasn’t opened Wednesday.

“This is an important and exciting day for the history of this commonwealth,” Northam said after the opening. “These are some very interesting documents.”

The publish date of Burgwyn’s book, 1889, suggests that this time capsule was placed, perhaps quietly, by the pedestal’s builders, when it was half complete in either 1889 or 1890.

The conservators discovered the artifacts were damp, victims of condensation. There was a crack at the bottom of the box, allowing water and air to seep in. And the 40-degree temperature swing in the past six days didn’t help.

Sue Donovan, a paper conservator from the University of Virginia, slowly picked apart the papers, careful not to damage them. Chelsea Blake examined the coin, which began to tarnish after it was exposed to the air.

This was normal work for the conservators. Except this time, there were 25 or so members of the media watching.

“I’ve never worked with this many reporters watching me,” Blake said.

The conservators will place some of the items in the freezer to keep mold from growing on them. They separated the papers in hopes of drying them out. It could take days for them to completely understand what they have and what it means, Northam said.

It’s unclear what will happen to the new time capsule placed under the pedestal by the Northam administration in September. The state and the city of Richmond want the Lee statue, its pedestal and perhaps the time capsule to be moved to a museum, said Clark Mercer, chief of staff for the governor.

The question of the 1887 time capsule remains. Did it ever exist at all? Was it stolen or moved?

“I think it’s still in the foundation,” said Dale Blumfield, a writer and historian who has studied the capsule.

The final granite stone from the Lee pedestal was removed Wednesday, said Devon Henry, the project’s contractor. There are still boulders and rocks below ground level that made up the foundation.

It’s unclear if the masonry crew will return from Connecticut after Christmas to keep working or to keep looking for the other time capsule. Those decisions are up to the Northam administration, Henry said.

The other capsule, he said, may still be there, somewhere around the northeast corner. Lying somewhere among the rubble may be the answer to the other mystery.

VIDEOS: 1887 time capsule found in Lee monument is being opened

PHOTOS: Inside the 1887 time capsule found in Richmond, Virginia

WH 'refining plans for all scenarios' in Ukraine

WH 'refining plans for all scenarios' in Ukraine

WH on SCOTUS and race in college admissions case

WH on SCOTUS and race in college admissions case 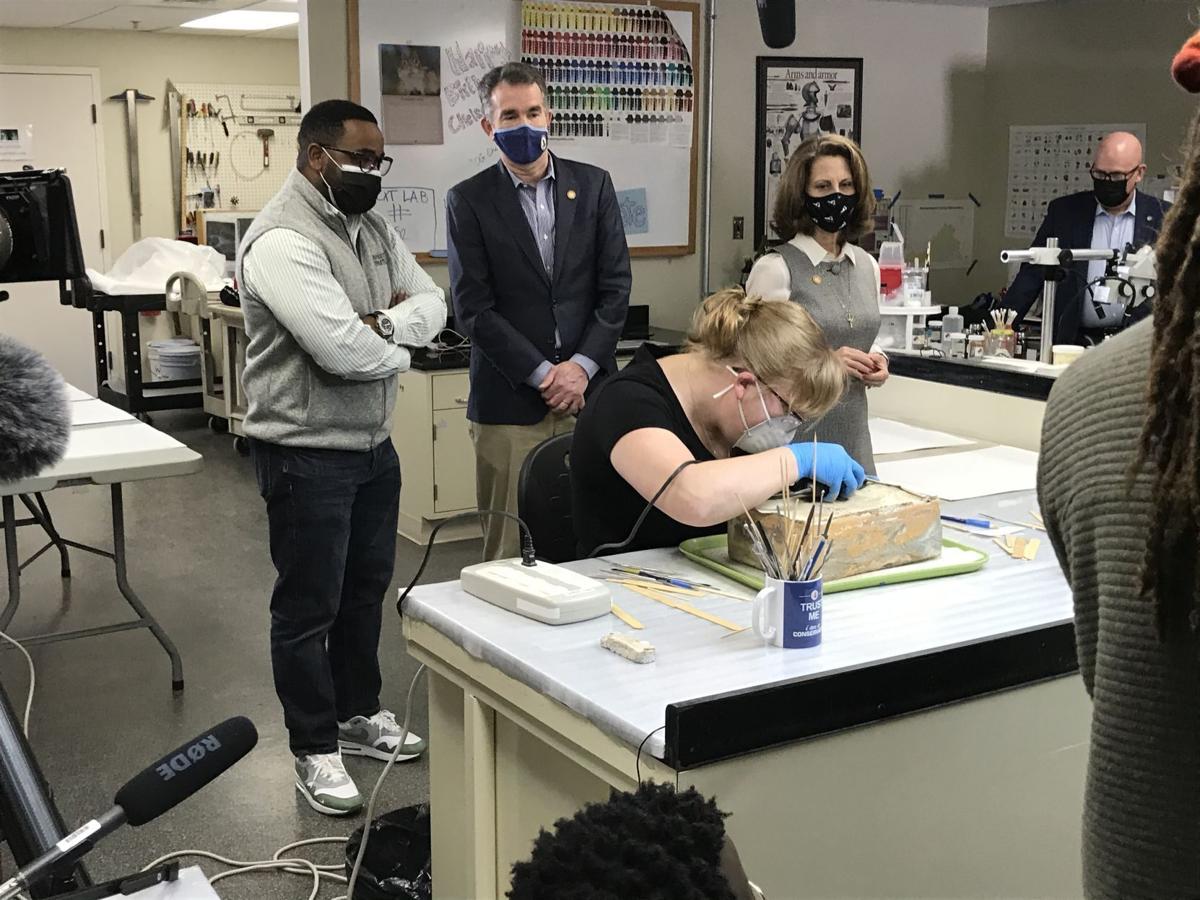 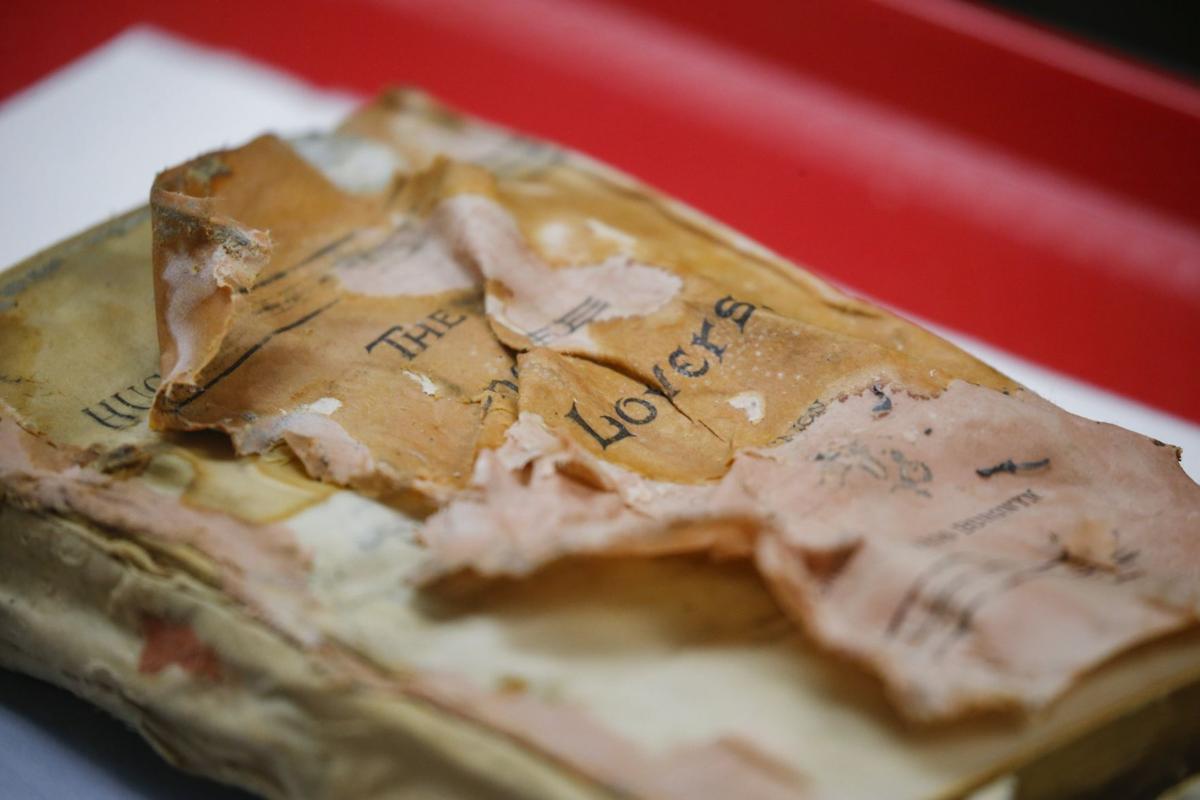 The box’s contents include books and papers thought to be an homage to the pedestal’s builders. 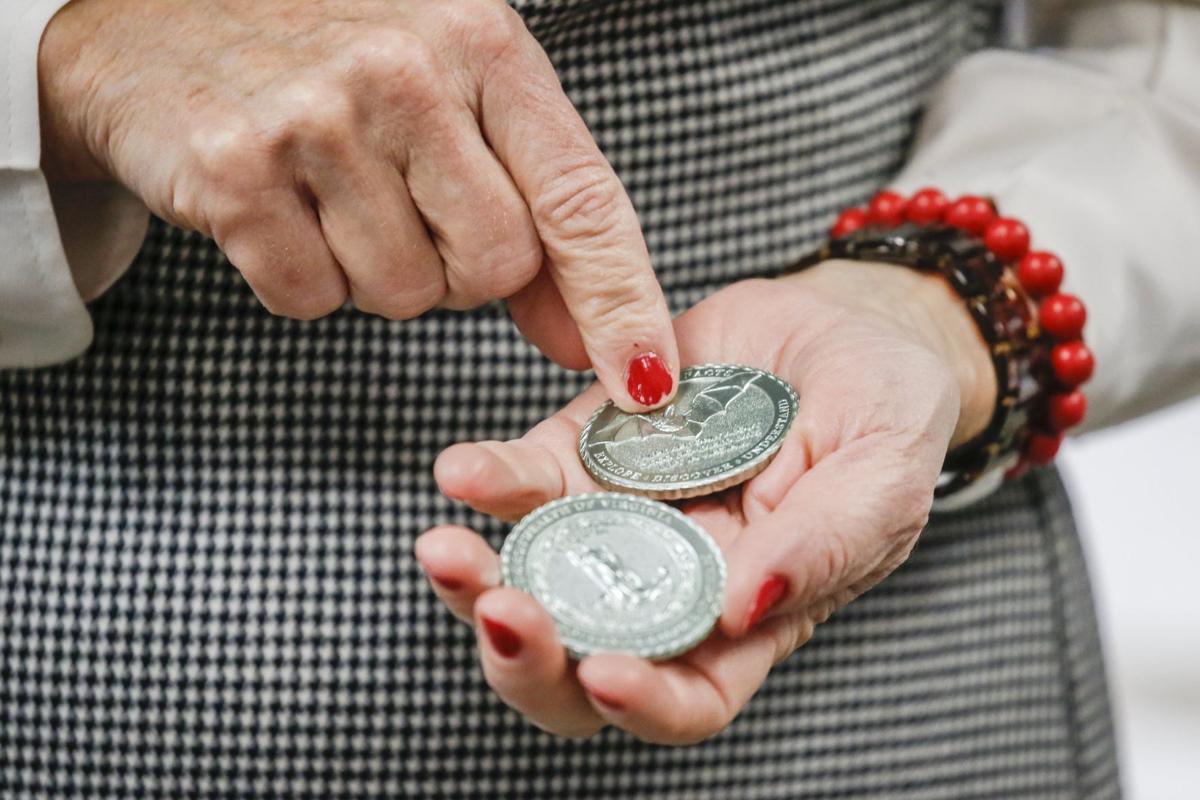 First Lady Pamela Northam presents her challenge coin during the opening of a 1887 time capsule on Wednesday, December 22, 2021 at Department of Historic Resources Lab in Richmond, Virginia.