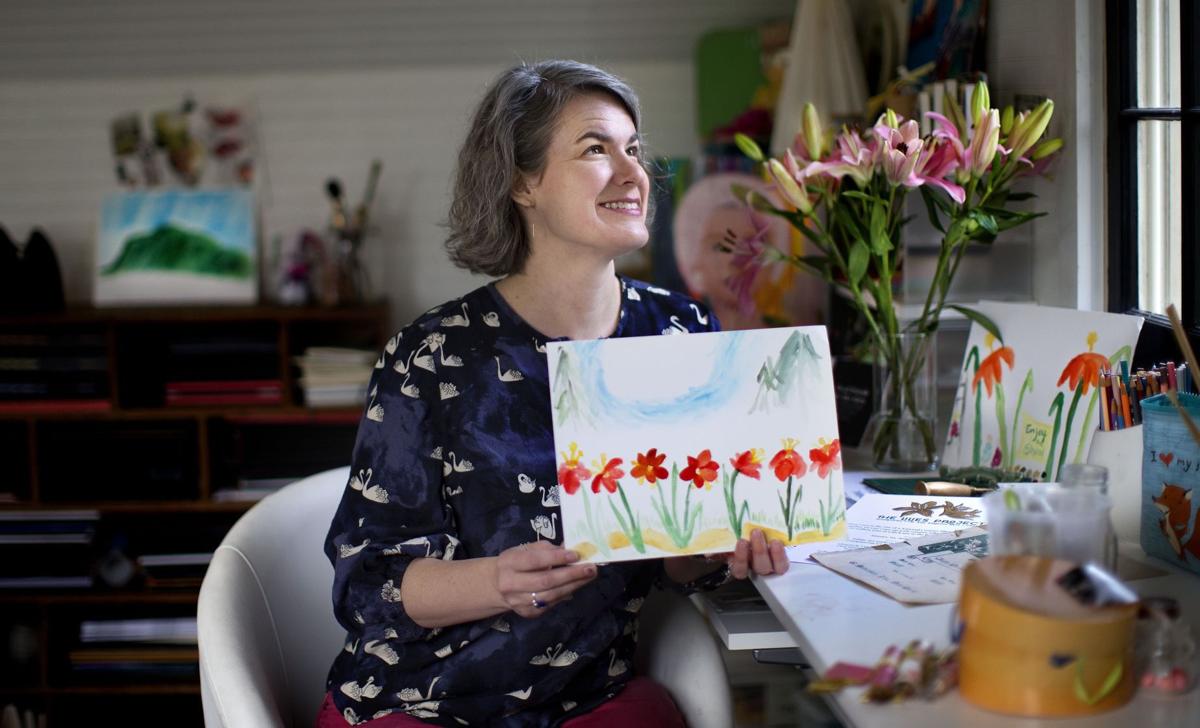 Greensboro artist Caroline Armijo holds up a painting of lilies she used in her winning proposal for a $350,000 grant to create public artwork using coal ash. 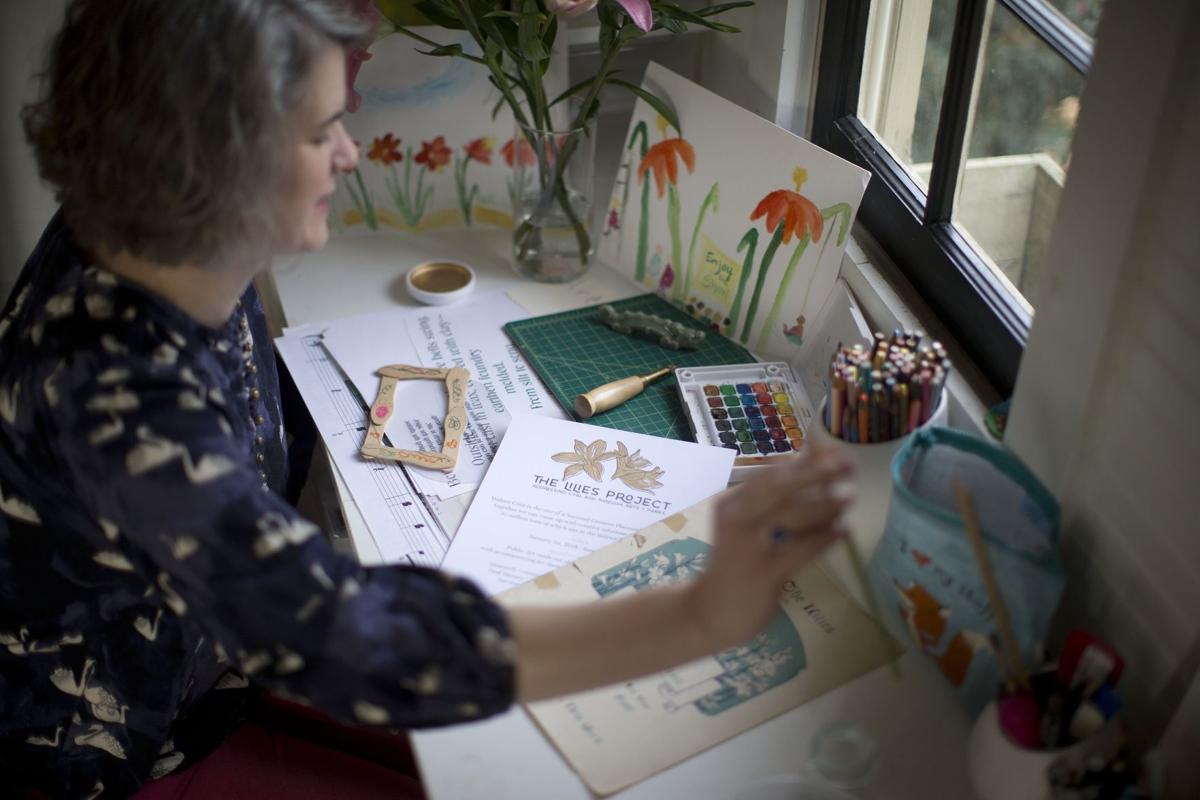 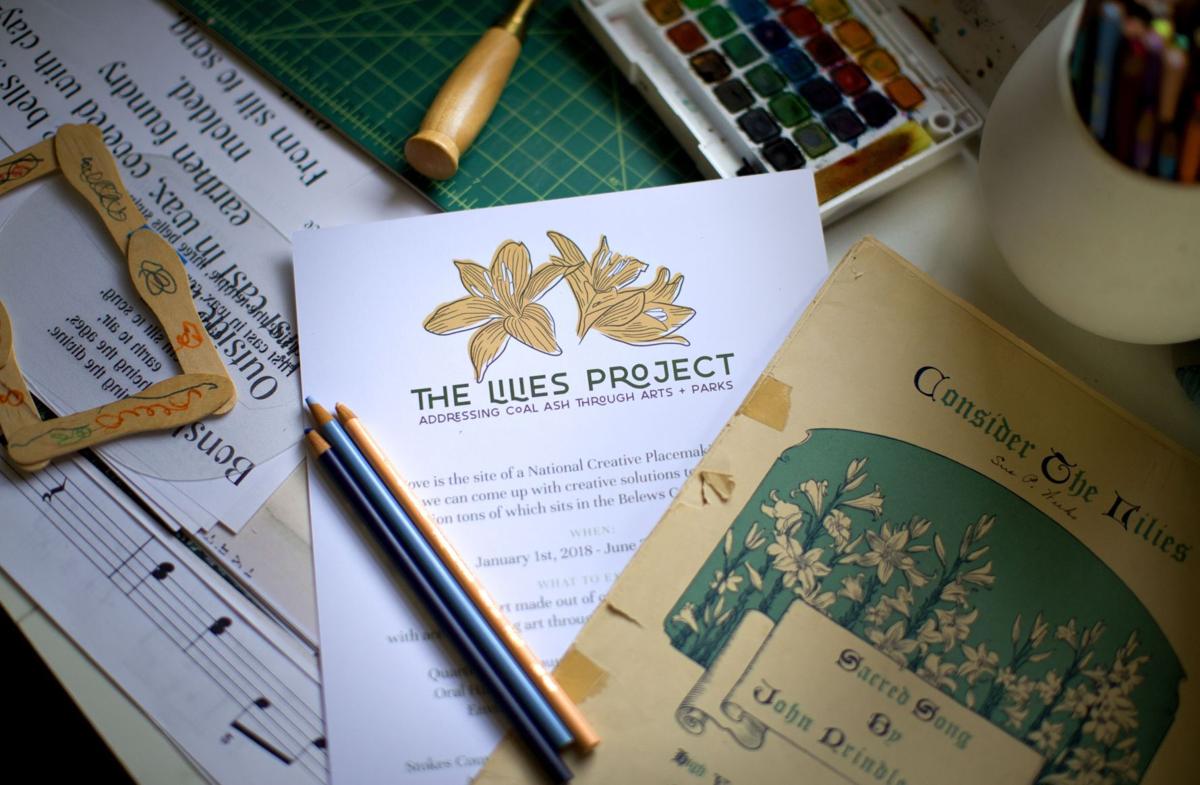 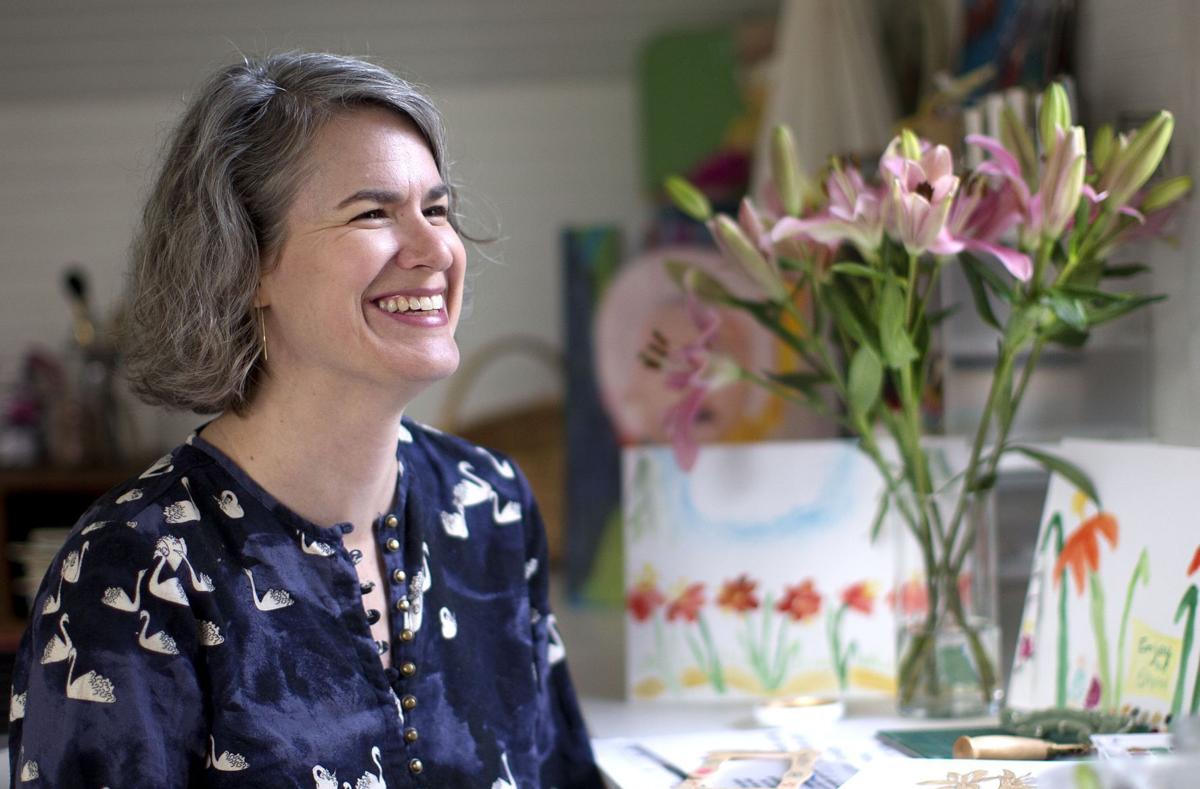 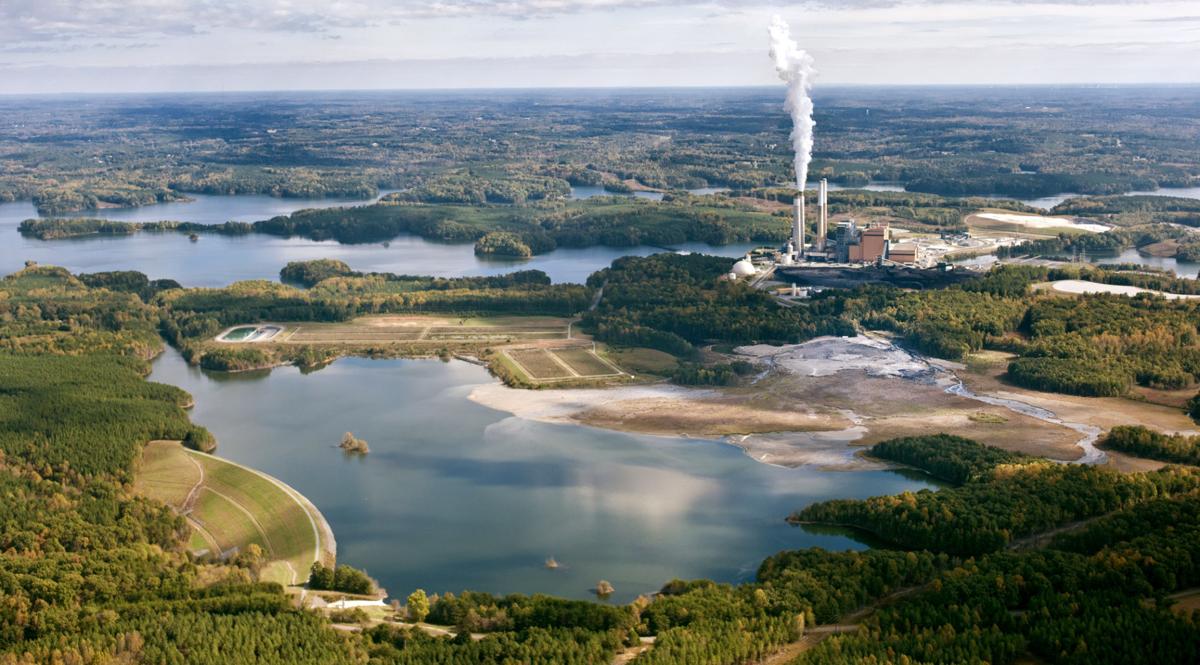 GREENSBORO — Much has been said about coal ash since that grimy waste product shot to the top of North Carolina’s political agenda after the 2014 spill into the Dan River.

It’s a pretty safe bet that, in all that time, nobody has ever praised the stuff for its beauty or elegance.

But that could change if Greensboro artist Caroline Armijo succeeds with a coal ash project that attempts to meld the worlds of artistic creativity, scientific inquiry, civil rights and film history.

Armijo recently won a $350,000 grant from ArtPlace America to use coal ash in making a public art display near a controversial Stokes County power plant. The work of art will honor a man born in that area, the late composer and arranger Jester Hairston, who created the music for the 1963 movie “Lilies of the Field.”

Sidney Poitier became the first African-American actor to win an Academy Award as best actor for his starring role in the film with its catchy “Amen” anthem assembled by the Belews Creek-born Hairston, whose singing voice dubbed for Poitier’s on the soundtrack.

In homage, Armijo plans to make decorative lilies out of coal ash.

“I’m hoping to create a mold and then use encapsulated coal ash in the artwork,” Armijo said of the project, which is expected to take about 2½ years to complete. “The flower blossoms will be from the mold.”

A Stokes County native, Armijo persuaded officials at the ArtPlace National Creative Placemaking Fund to back her project and create a public space near Duke Energy’s Belews Creek Steam Station, both to memorialize Hairston and to encourage the productive reuse of roughly 12 million tons of submerged ash near the coal-fired power-generating plant in Stokes County.

The plant and its massive ash basin were built in the early 1970s near the site of a former tobacco plantation where composer Hairston was born and where earlier generations of his family apparently had been enslaved.

Armijo said the project is aimed at providing a recreational and cultural resource for the community of Walnut Cove near the Belews Creek plant. Ideally, it also would help spur Duke Energy to recycle the coal ash submerged in the plant’s storage basin instead of “capping in place,” Armijo said.

“We’re looking for an alternative solution to clean up the site because we don’t want it to be capped in place,” she said, referring to Duke Energy’s current plan to leave the ash in its present location under a waterproof covering that critics consider insufficient.

She said she also hopes the art project will bring attention to the coal ash research at A&T and lead to development of a pilot plant at or near Belews Creek using the lab’s technology, which can manufacture a variety of items, ranging from park benches to utility pole cross arms.

Armijo, 43, is the wife of Enrique Armijo, an associate professor and associate dean for academic affairs at the Elon University School of Law in Greensboro. They have two young children.

She knows the area around the Duke Energy plant quite well as the daughter of attorney Jerry Rutledge, who has practiced in Walnut Cove for about 40 years. She grew up in nearby Germanton.

Armijo is a mixed-media artist who also describes herself as a strong advocate for the environment.

In fact, she approached the coal ash issue first as an environmentalist who belongs to two groups that want to lift the burden of coal ash pollution from the small and politically powerless communities that often border the region’s coal-fired power plants, Belews Creek-based Residents for Coal Ash Cleanup and the regional Alliance of Carolinans Together Against Coal Ash.

She had heard about the research center’s pioneering work with coal ash to develop techniques to lock up its potentially harmful chemicals in a solid matrix that either can be stored as-is for generations or molded into durable items for the building industry. End products include everything from military-grade wallboard capable of resisting an explosion to household door and window molding.

“It’s quite safe,” Shivakumar said recently. “We know that coal ash is one of the best natural sources to use in making products.”

Armijo also notes that the plant at Belews Creek has had a disproportionate effect on the area’s black residents, so that recognizing Hairston with its coal ash has special meaning.

The predominantly African-American community of Little Egypt was flooded decades ago in creating Belews Lake as the steam station’s cooling pond, she said.

Today, the largely black subdivision of Walnut Tree borders Walnut Cove not far from the plant and is part of a federal lawsuit filed in early December against Duke Energy for alleged violations of the federal Clean Water Act.

Armijo and her fellow environmentalists initially hoped that Duke Energy would select Belews Creek as one of several coal-fired sites where it plans to build processing plants to recover ash for use by the concrete industry. But the Stokes plant didn’t make the cut, and Duke instead chose plants near Salisbury, Goldsboro and Moncure.

Coal ash is not officially considered a hazardous material. But it contains trace elements of such chemicals as arsenic, hexavalent chromium, selenium and vanadium that can threaten water quality given the gigantic quantities of ash that Duke Energy has amassed at 14 sites across North Carolina.

In the meantime, Shivakumar and Brown are looking for an opportunity to ramp up their technology to manufacturing scale. And Armijo said she thinks the attention that her art project garners could help with that by perhaps attracting financial support for a pilot plant near Belews Creek to demonstrate the practicality of A&T’s manufacturing techniques.

Armijo said she submitted her proposal to ArtPlace America after seeing a Facebook advertisement last January that asked “if you have an idea” for a public art project highlighting a particular place.

ArtPlace America is a partnership involving a number of private nonprofit foundations, federal agencies and financial institutions supporting projects that make art a physical part of a community’s planning and development process.

Armijo, Shivakumar and Brown are at the start of that planning process for the Belews Creek artwork. Armijo said she envisions the development of a walking tour that might involve Walnut Cove’s Fowler Park, with perhaps an archway of metalwork adorned by giant lilies made of A&T’s coal ash substance.

“This is my first foray into making molds, so I will be working closely with the lab at A&T,” Armijo said.

If the plan that is developed in the coming months does involve a walking tour or greenway, she said it also could include other decorative castings along the way made out of the coal ash-based material.

Armijo figures that adorned with seven lily blossoms, the main structure alone would consume a little more than 10 tons of coal ash.

In her proposal to the ArtPlace officials, she also suggested the possibility of a base made of concrete fortified by coal ash and stamped or stained with “a visual representation of Jester Hairston’s ‘Amen.’”

Exposed to the elements every day, the blend of coal ash and polyurethane should last as long as any other material suitable for outdoor applications, said Brown, a chemist who invented a key step in the process that helps fuse the various ingredients.

“You’d paint it, just like you would metal,” he said, noting that final durability testing will be completed shortly on both painted and unpainted samples.

Of course, there’s a lot of planning to be done before Armijo’s public art project needs its first drop of paint.

That opening phase of the project is scheduled to begin with a kickoff ceremony next month in Walnut Cove during the Martin Luther King Jr. Day holiday weekend.

Armijo said she knows that with millions of tons of coal ash submerged from decades of coal-fired power production, her arts initiative and A&T’s manufacturing process are not the magic bullet that alone can vanquish coal ash as a potential threat to water quality, aquatic life and human health.

“We realize that there is not only one solution,” she said. “With a problem this big, there has to be six or seven different solutions. But this definitely can play a part.”

Greensboro artist Caroline Armijo holds up a painting of lilies she used in her winning proposal for a $350,000 grant to create public artwork using coal ash. 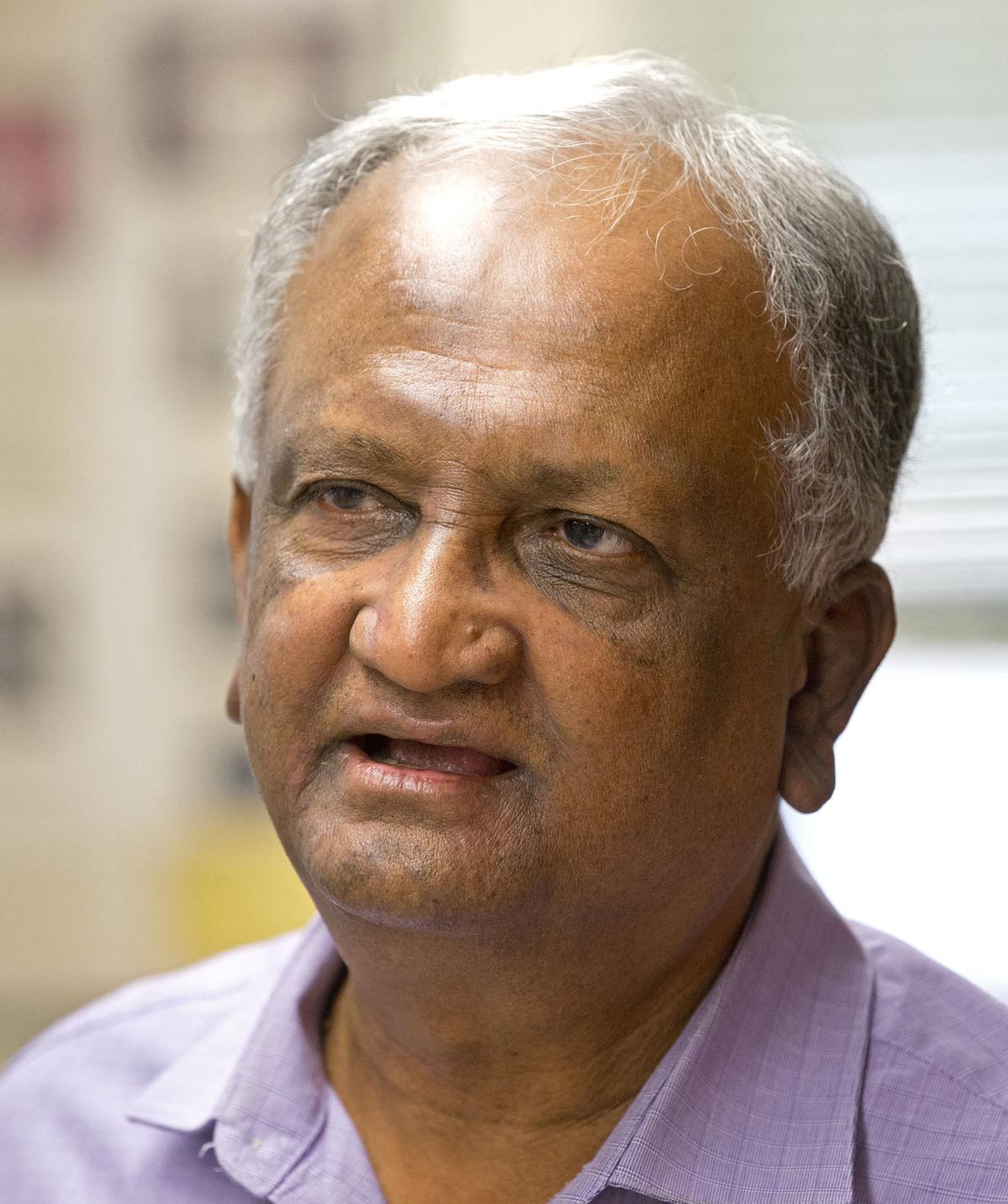