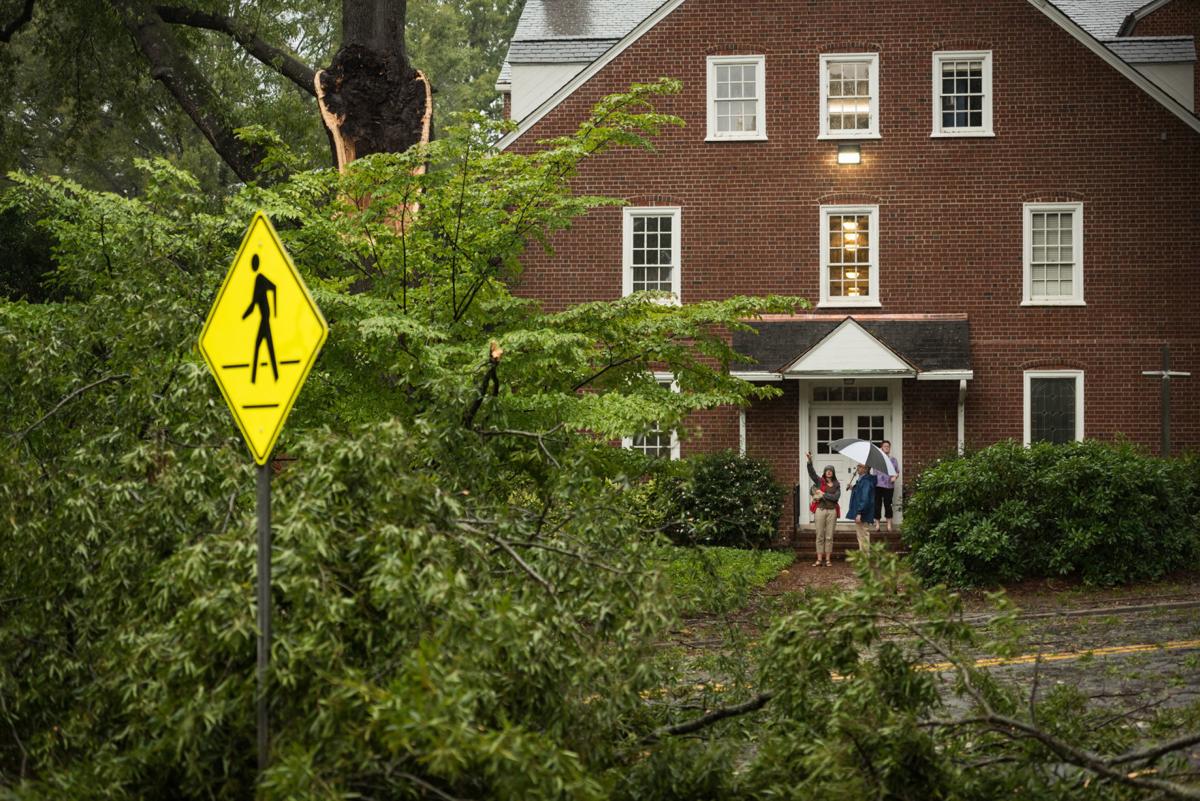 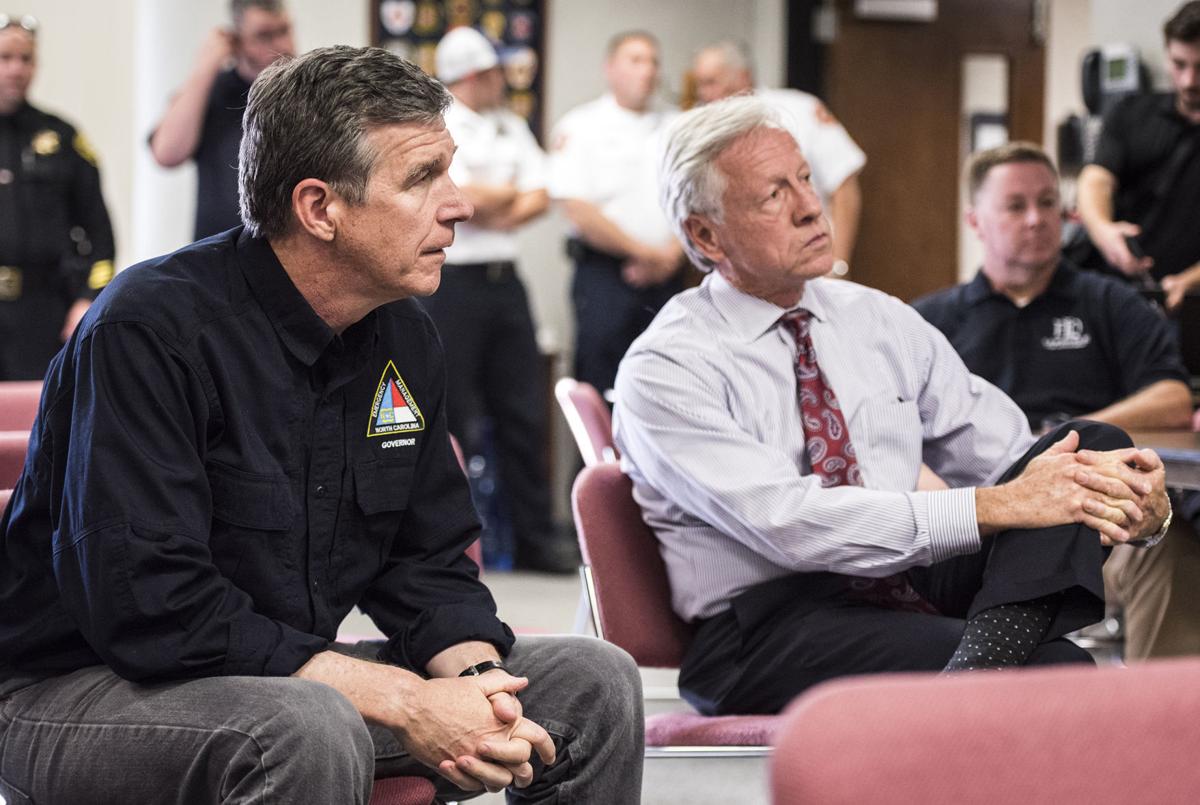 Power outages are dwindling and roads are reopening in Forsyth County, but some residents are still dealing with the effects of Thursday’s storm.

The number of Duke Energy customers still without power from the remnants of Hurricane Michael had dropped to around 1,000 in Forsyth, 11,000 in Guilford and 1,300 in Davidson counties Monday afternoon.

“We still have broken poles and wires down,” Jimmy Flythe, a spokesman for Duke Energy, said Sunday, referring to power outages that crews were working on in Forsyth County.

Overall, nearly 31,000 of Duke Energy’s customers were still without power in North Carolina and South Carolina on Monday afternoon. That’s down from a peak of 554,000 customers at the height of the storm on Thursday.

Guilford, Rockingham and Alamance counties were among the hardest hit.

“We do have all the schools on at this point in time in Stokes and Forsyth counties,” Flythe said.

He said that Duke Energy hoped to get power restored to schools in Guilford County by the end of Sunday.

Don Hamrick, the owner of Custom Homes By Hamrick, was ready to showcase his houses in the 2018 Fall Parade of Homes when the storm moved through Winston-Salem.

Both houses on Buena Vista Road were without power from Thursday afternoon until Saturday night.

Hamrick showed the parade association home at 3223 Buena Vista Road without electricity and used a generator to power his other house, which was next door.

“The biggest thing was the confusion with Robinhood being closed,” he said.

But people found their way around any detours to see his entries in the parade — 400 on Saturday and 650 on Sunday.

Reynolda House officials said that because of the nature of staffing and planning required to re-open, the decision was made to keep the museum closed to the public on Sunday to restore all operations to normal.

The museum was closed to the public from Thursday afternoon through Sunday.

Reynolda House officials said that staff members worked around the clock to monitor conditions at the museum during the outage to ensure the safety of the collections and the historic building.

The museum, which is regularly closed on Mondays, will open at 9:30 a.m. Tuesday.

“As a museum, we thrive when our galleries are full of people,” said Allison Perkins, Reynolda House executive director and Wake Forest associate provost for Reynolda House & Reynolda Gardens.

“This closure was particularly painful just three weeks after opening our major fall exhibition ‘Dorothea Lange’s America.’ We look forward to opening our doors again and welcoming visitors back this week.”

During the closure, Reynolda House staff contacted people who had pre-purchased weekend admission to the museum and “Dorothea Lange’s America.”

The museum will honor those tickets for admission any time before Dec. 30.

As of Sunday afternoon, Duke Energy had more than 10,000 people working to restore power in North Carolina and South Carolina, including line technicians, tree crews, engineers and logistics personnel to help feed and house crews.

Flythe asked that people still without power be patient.

“Know that we are working as hard and safe as we can to get power on,” he said.

He said that Duke Energy has continually added outside crews to help.

“As some areas are cleaning up, we’ll roll those crews into the higher impacted areas to continue restoration,” he said.

Crews have come as far away as Indiana, Kentucky, Missouri, New York, Ohio and Texas.

“Our estimated restoration time for everybody, or the vast majority of customers, is by late Tuesday night,” Flythe said.

As of Sunday morning, Winston-Salem city crews had a few trees they could not clear because they were waiting for Duke Energy to verify that the lines were not “energized,” said Damon Dequenne, assistant city manager.

Dequenne said that about 18 people who were displaced from their homes on Thursday stayed at a shelter set up by the Red Cross at Hanes Hosiery Community Center on Reynolds Boulevard but were moved to more permanent accommodations by Saturday afternoon.

“The fire department went back to a normal schedule on Friday,” Dequenne said.

Dequenne said he would have a better idea today of the number of roads, if any, that are closed in the city.

“The majority of the closings initially were due to flooding, and once the flooding subsided we opened all those roads,” he said.

“The next were due to trees and power lines down and we’ve been systematically clearing those and getting those roads open. I think it’s down to residential streets and I think those are a minor impact at this point.”

Dequenne commended city crews and the City-County Emergency Management Department “for a very professional and safe response to the effects of Hurricane Michael.”

As far as major roads, Mark Crook, division staff maintenance engineer for the N.C. Department of Transportation, said, “All of our interstate routes have been clear throughout the weekend, and all lanes are open on our primary routes. There are still several secondary roads that are closed due to washouts that occurred from (Hurricane) Michael, and we had a few that were closed from (Hurricane) Florence that we were still working on.”

Due to continuing power outages in Forsyth County, Winston-Salem/Forsyth County Schools will operate on a two-hour delay on Monday, school off…