This sixth-grader in California was sick of coloring. So she skipped six grades to attend Cal State L.A.
0 comments
Share this
1 of 2 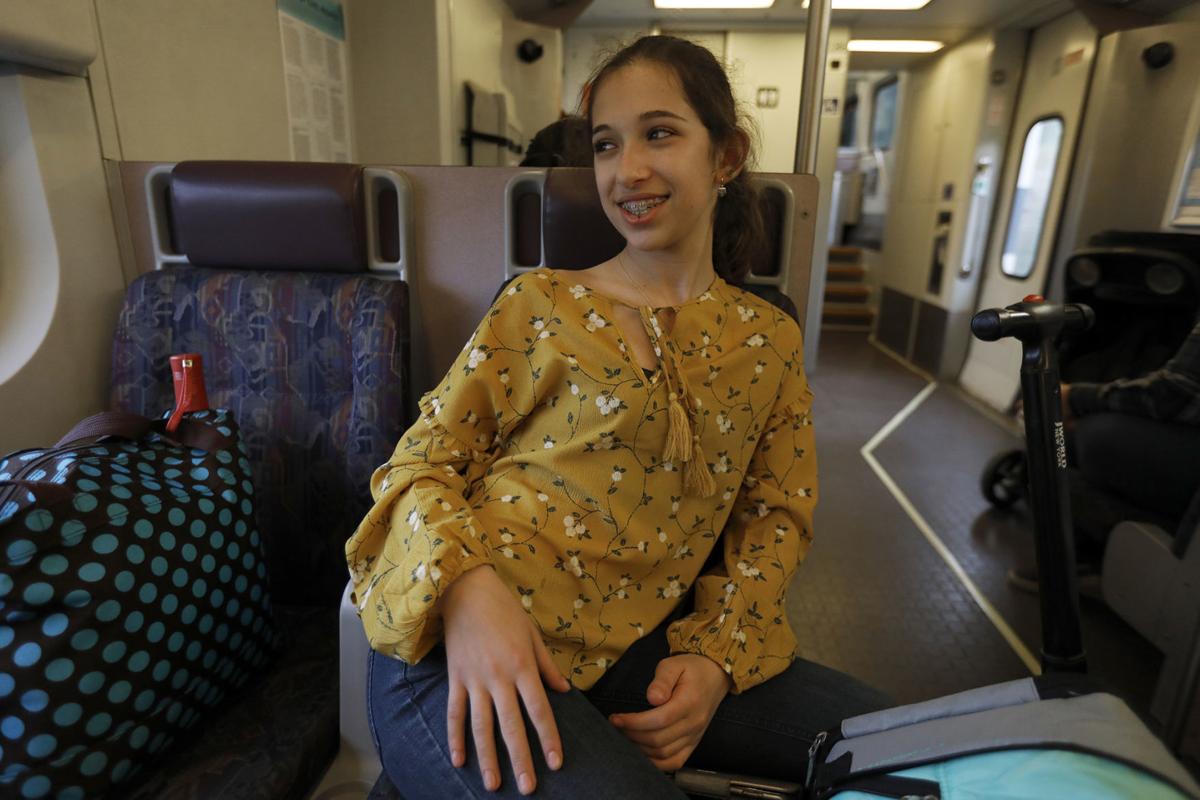 California State University, Los Angeles student Mia Turel, 13, is all smiles after class as she takes the train home after school in Los Angeles on February 12, 2019. She participates in the The Early Entrance Program. 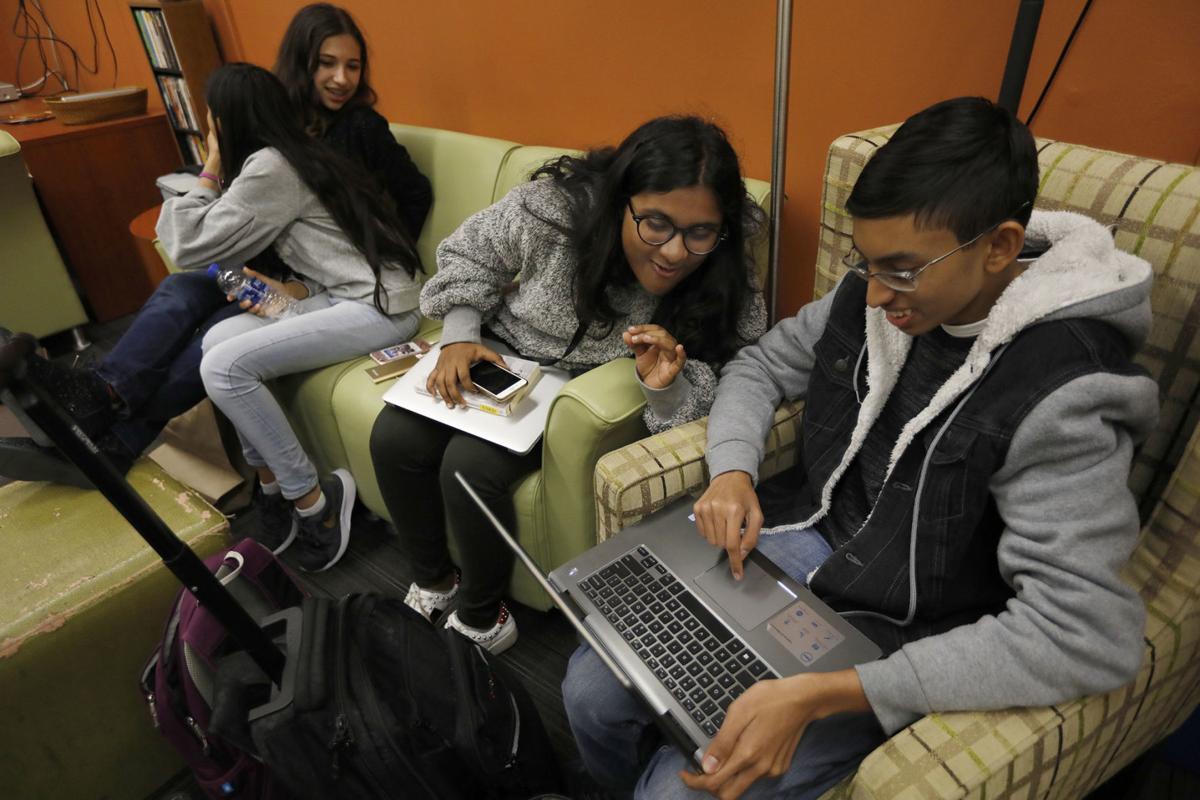 Mia Turel was in first grade when she asked her father to teach her how to chart the probability of losing her baby teeth over time. By second grade, she was reading high school-level books on Martin Luther King Jr. Then she became fascinated by TED Talks on global warming and marine biology.

So when her sixth-grade teacher assigned the class to color a map of Mesopotamia, Mia wasn't exactly thrilled.

"I'm sorry, I'm not interested in coloring a map," she told her mother. "Coloring is pointless."

With that, Mia left Crescent Elementary in Anaheim. She studied at home for the rest of the year - and then, at age 12, jumped six grade levels to enter Cal State Los Angeles as a freshman last fall.

While the admissions scandal has transfixed the nation's attention on elite universities such as UCLA and USC, the school of choice for many whiz kids like Mia is Cal State L.A.

For nearly four decades, the campus has provided a haven where children who are academically gifted and socially mature can bypass years of boring classwork and surge ahead. Cal State L.A. is the only university in California - and one of only a handful across the country - with a program to admit students as young as 11.

The statistics are a reflection of the way gifted young students are often overlooked and underserved by universities and school districts, and the lawmakers who hold the purse-strings to both.

"We have done a tremendous disservice to gifted and talented students," said Frank C. Worrell, a professor in the UC Berkeley graduate school of education. "We are actually hurting the nation's economic competitiveness."

For K-12 schools, federal funding for gifted programs was just $12 million in 2017, compared to $13 billion for special education.

California doesn't set aside money for gifted programs in K-12 at all. It stopped doing that in 2013, when the state changed the way it doled out educational dollars. Now the money is rolled into a block grant, which school districts can use on gifted education if they choose. Overall, only about 45% of California's 1,800 schools had gifted programs in 2008-09, the last year the state collected such data.

Of the programs that do exist in California and elsewhere, there is no statewide quality control. A recent survey from the University of Connecticut found that most gifted classes in 2,000 schools in three Midwestern and Southern states didn't actually provide much accelerated content.

One reason gifted programs lack support is because some parents, politicians and even educators view them as elitist, Worrell said. But he argues that failing to provide such programs primarily shortchanges low-income students whose parents aren't able to afford enrichment programs the way affluent families can.

Most universities, meanwhile, don't offer programs for students as young as Mia, worried about the potential liability of having them share a campus with young adults, Worrell said.

But Cal State L.A. has remained an outlier.

The campus has offered its Early Entrance Program since 1982. A Cal State L.A. psychology professor, who was looking for accelerated learning for her gifted child, spearheaded efforts to launch it based on a pioneering model at the University of Washington. A steady demand for spots has prompted a plan to expand over the next five years and to recruit from a more diverse swath of schools, said Trinh Pham, director of the Early Entrance Program and Honors College.

The clear benefit to students who can't get their unusual academic needs met elsewhere has motivated the campus to keep the Early Entrance Program going, Pham said.

Each year, between 20 and 30 students are selected from as many as 100 applicants. Cal State L.A provides support for those who are admitted, with dedicated counselors. They also get access to a private lounge and kitchen with secure coded entry.

The space is designed to help them forge friendships as they sprawl out on comfy chairs, eat lunch, play cards and do homework. Here, they can unapologetically nerd out with kindred spirits - watching brain surgery on YouTube, for instance.

"Oooh! It's so satisfying!" shrieked Annsana Biju, 14, as she and a friend watched a surgeon remove a blood clot from a brain. "It just slid right out! Beautiful!"

Annsana dreams of becoming a neurosurgeon because she wants to help people. She also likes that brains are "one big squishy thing." Born in India, Annsana learned English in a year and said her teachers told her that she was too impatient. She didn't slow down. By the fifth grade, she had devoured a book on neurology.

Annsana, like her classmates in the Early Entrance Program, had to meet several requirements, including qualifying scores on SAT or ACT exams, interviews and participation in a six-week summer enrichment program.

Even for high achievers, however, the college experience can be difficult at first, Pham said. Still, about 80% graduate within five years.

Shanti Raminani, the 12-year-old daughter of immigrants from India and Vietnam, said she got a C+ in her first biology test during the Cal State L.A. summer program last year. It was only the second C in her life. Her first one came on an algebra test at Moorpark College near Simi Valley.

How old was she then?

She was so young - just a third-grader - that the community college required her mother to sit in the class with her. Shanti ended up passing both classes with an A and managed a 3.96 GPA in her first semester last fall at Cal State L.A. The soft-spoken preteen wants to be a pediatric surgeon.

"What we're trying to do is help students tap into their full potential," Pham said. "They don't view high school as a realistic possibility for them. This faster acceleration is what they need or want."

The young scholars are just tall enough to blend in with the college crowd at Cal State L.A. - at first glance, anyway. In a recent chemistry lab class, Mia and Shanti, wearing green goggles and blue rubber gloves like all of the other students, measured water droplets and logged data in their notebooks.

But Mia's wide smile reveals shiny silver braces. Shanti totes around a flowered backpack, a pink pen topped with a plastic bunny head and a laptop cover with the Shakespearean quote: "Though she be but little, she is fierce."

"Wait, how old are you?" Diana Fatoohi asked Mia in the first week of their calculus class this semester. When Mia disclosed her age, Fatoohi responded, "I'm 20 and I'm sitting in a class with a 13-year-old? Is this easy for you?"

This semester, the young Cal State L.A. students have studied the emoluments clause in the U.S. Constitution, written a paper on political polarization and did class presentations tying "Dante's Inferno" to the Beach Boys. They've figured out how to measure molecules with stearic acid, learned logarithmic functions and vector calculus.

To keep up, they've vastly increased the amount of time for homework. Mia says she spends five hours a night studying compared to 30 minutes in sixth grade. She's interested in research about disease prevention.

Viknes Muralitharan, 15, said he found his one year in high school frustrating because the classes were repetitive and allowed him to reach "just half of what I wanted to accomplish." In college, he had to learn better study habits - no procrastination - and managed to earn a 3.96 GPA his first semester.

The students say they don't mind missing out on iconic high school experiences - dances and football games - because a campus club for EEPsters, as the Early Entrance Program students are known, sponsors social gatherings. This year, they've had outings to Big Bear and Catalina Island, and bowling and movie nights.

But sometimes, they sound wistful.

"I feel that sometimes," Mia replied. "But in the end, your real friends you'll keep up your contacts with."

Shanti's parents had similar worries when they first considered enrolling their daughter and older son, 14-year-old Sathya, in the Cal State L.A. program.

"We always wondered: Is this the right thing?" said Thoa Le, Shanti's mother. "Do you want to skip their childhood, basically?"

But once their children said they wanted to jump to college, they went all in. The family lives in Camarillo, but Shanti and Sathya stay with their father, Ramesh Raminani, at a hotel near campus during the week. He drops them off at school, drives two hours to his pharmacy business and two hours back to pick them up. The drive gives him a chance to talk to his children about hard work, humility and gratitude - values he cherishes from the Bhagavad Gita of his Hindu faith.

Shanti and Mia have adjusted well to college, their parents say, and still act like normal kids. Shanti plays the violin, swims, studies hairdos on YouTube and makes her own slime. Mia ice skates, collects fairy figurines and dotes on her pets - a dog, frogs and a tarantula.

And last month, the girls attended their first formal dance, sponsored by the club for EEPsters. Shanti wore a grey taffeta gown and three-inch heels. Mia was in sparkly blue and Annsana in cranberry colored sequins. As each arrived at Almansor Court in Alhambra, they squealed and hugged.

I love your hair!

Then they floated into a room decorated with glittery stars and danced.

Gross or brilliant? You decide.

These are some of the strangest items TSA won't let you bring in your carry-on bag.

California State University, Los Angeles student Mia Turel, 13, is all smiles after class as she takes the train home after school in Los Angeles on February 12, 2019. She participates in the The Early Entrance Program. 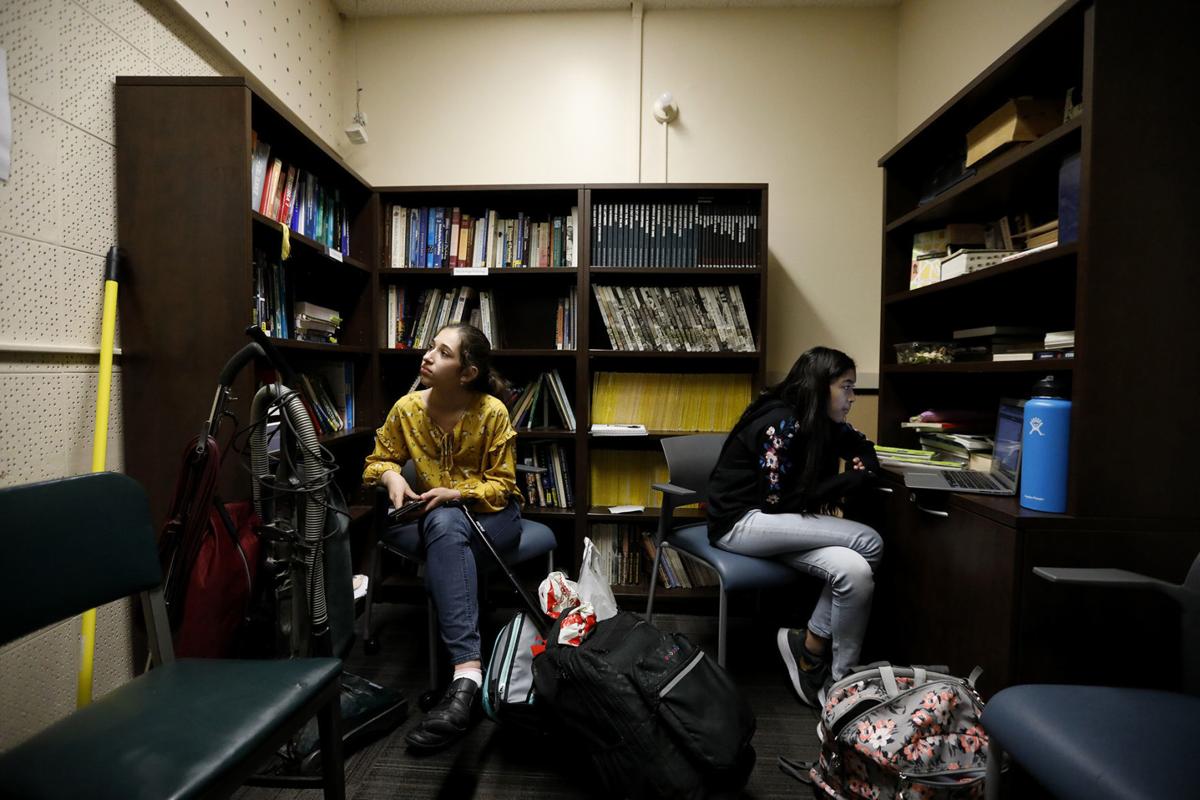 California State University, Los Angeles student Mia Turel, 13, left, and her friend Shanti Raminani, 12, right, hang out after their Chemistry Lab in Los Angeles on February 12, 2019. They both participate in the Early Entrance Program.