Mere anarchy is loosed upon the world”

Jan. 6, 2021, must now be included in the tragic dates in American history, one, in the words of Franklin Roosevelt, that will live in infamy. It is not a date that draws on a linear comparison to the attack on Pearl Harbor, the Kennedy assassination, or the 9/11 terrorist attacks; it will be infamous for different reasons.

On that day, the unthinkable occurred. America’s 227-year tradition of peaceful transference of power came to an abrupt end — the crescendo of the systematic attempts to erode this nation’s democratic norms.

Jan. 6, 2021, was the first time I felt the need to rethink the statement attributed to Benjamin Franklin.

When asked if America’s new government was a republic or a monarchy, Franklin supposedly responded, “A republic, if you can keep it.” Looking at rioters scaling the Capitol wall didn’t feel to me as if this republic was something we could keep.

When public discourse should have still been talking about the historic victories by the state of Georgia that sent an African-American and the son of a Jewish immigrant to the U.S. Senate, mayhem, invoking personal privilege, was granted the floor to speak, holding it for several hours.

Pregnant with absurdity, Jan. 6 began when an otherwise ceremonial act was transformed into political theater for which the outcome was already fait accompli. A cabal of Republican senators announced they would support Missouri Sen. Josh Hawley’s efforts to challenge the validity of President-elect Joe Biden’s victory.

Such brazen, cynical, and for some, politically ambitious acts merely add to the legitimacy of conspiracy theorists who ignore facts, convinced that the lack of evidence became the self-fulfilling prophecy that merely proves the pervasive power and influence of their malicious “deep state” adversary.

Though they question the outcome of the presidential election in several states, no senator represented a state in question. Where was their vaunted reverence for the 10th Amendment, or for that matter, the Constitution they took an oath to support and defend?

With the rash imprudence of the average 3-year-old, these senators, along with 140 Republican members of the House of Representatives, engaged in the democratic equivalent of administering self-inflicted wounds before taking a nude swim in Australian waters during the Great White Shark mating season.

With a final push from the current president of the United States, they stormed the Capitol, planted a noose outside, some brandishing the flag that represented the Confederacy. Members of Congress were ushered to safe locations and U.S. Capitol Police had guns drawn, barricaded inside the congressional chambers. It was the morbid response when the outcome of a free and fair election did not go their way.

Several hours after the melee was under control, with their political grandstanding having run amok, Congress performed the ceremonial task they were originally charged with.

As an African-American, I found it to be a profound head-scratcher, watching the amount of time required for law enforcement, however defined, to get control of the situation on Capitol Hill. I frankly could not envision something similar if this were an effort led by people of color.

The narratives over the past several years also made it difficult to imagine limited loss of life. That does not mitigate that five people have needlessly lost their lives.

There could very well be logical reasons for the delay that I’m unaware of. But seeing protesters vandalizing Speaker of the House Nancy Pelosi’s office, it is difficult to imagine an equivalent circumstance and outcome if we simply transpose the malefactors.

This is not a time to reflexively draw false equivalencies to justify what is unjustifiable. Nor can I conceive of mitigating circumstances where one might apply the “on the other hand” scenario, especially when the other holds sedition.

What was witnessed Jan. 6 became emblematic of so much that troubles this nation. Though I wrote recently that the inauguration of Biden will not rival the inaugurations of 1861 (Civil War) or 1933 (Great Depression), presidential historian Douglas Brinkley reminded me in a recent conversation that it will clearly come in third place.

In the aftermath of the Jan. 6 riot, Biden offered a statement of healing, saying, “This is not who we are.” I agree with Biden’s sentiments. I believe the scenes of the Capitol being stormed like some third-rate banana republic appalled most Americans.

It is, however, who some of us are. Moreover, it was enough so that Jan. 6, 2021, will be enshrined as another date that will also live in infamy.

The Rev. Byron Williams (byron@publicmorality.org), a writer and the host of "The Public Morality" on WSNC 90.5, lives in Winston-Salem.

George Will: A heartbreaking spectacle

“Why can’t we just ignore personal character, as long as a person does the job?’” asked evangelist Billy Graham rhetorically in his 1999 autob…

Richard Kyte: Truth is only reliable foundation for justice

Opinion: For decades we have told our youth to “stay true to yourself” and “stick up for what you believe,” as if there were some virtue in stubborn persistence alone.

Supporters of President Trump stand outside the U.S. Capitol on Jan. 6 in Washington. 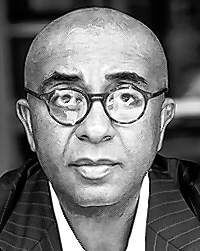