Hundreds of protesters participating in the “March for Justice & Community” took a 1.5-mile-long route from Burlington to Graham on July 11. 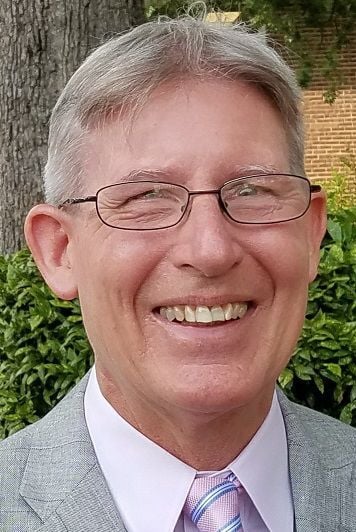 Graham in Alamance County is a lovely Southern town like those depicted in old movies. It’s also the home of a Confederate monument — a soldier atop a tall pedestal — situated at an inappropriate site, in front of the county’s Historic Courthouse in the center of a downtown street.

It’s also near the site where Wyatt Outlaw, Graham’s first Black elected town commissioner and constable, was lynched by the Ku Klux Klan in 1870.

The courthouse is a government facility open to all and supposedly a symbol of justice for all.

The statue, 30 feet tall, dedicated on May 16, 1914 and given through the Daughters of the Confederacy, is a symbol for many of America’s greatest injustice — the Confederacy and its dedication to enslaving thousands of black people for centuries as well as the foundation for racism that continues today.

The statue has been a point of contention for years. It’s a frequent site for Confederate-flag waving events by groups like Alamance County Taking Back Alamance County (ACTBAC), which the Southern Poverty Law Center labeled as a hate group, and a lightning rod for those protesting racism or violence committed by law enforcement against Black Americans. But in the past few weeks, it has produced the greatest amount of sadness, frustration, agitation, outright anger, half-truths, gaffes, misstatements, fabrications, miscalculations, social action, political action, protests, vigils, walks, marches, racism and antiracism that I can remember over such a short period of time in this community — a place I’ve lived for 21 years in all.

Protests at the Graham monument started to occur regularly after the killing of George Floyd. While often violent protests and vandalism broke out in other cities, the vigils and protests in Graham have been largely peaceful, so far.

That’s not to say the protests have been without rancor. There has been pushing, shoving, shouting and displays of sidearms by some in attendance. As a result, states of emergency have been declared and curfews set. The Alamance County Sheriff’s Office and Graham Police Department are spending time and money guarding the statue and public. Other law enforcement agencies have been called in. Downtown businesses, already struggling due to the COVID-19 pandemic, are suffering even more.

After witnessing video of a confrontation in downtown Graham that featured shoving, displays of guns and an arrest for the assault of an Elon University professor, County Manager Brian Hagood recommended that the county Board of Commissioners move the statue to a secure place until a more appropriate home could be found, like a museum or cemetery. More than 150 municipal, business, health, education and other community leaders signed a letter asking the county or city of Graham to move the statue elsewhere and remove a divisive symbol that is also creating a dangerous situation in the community. So far the board has neglected to take their recommendations.

In June, Alamance County Sheriff Terry Johnson tried to eliminate the problem by denying permits for people to protest at the site. (This is the same sheriff who decided in June to protect the constitutional rights of Ace Speedway owners to put several thousand people in its grandstands during a global pandemic and against an order Gov. Roy Cooper.) The American Civil Liberties Union and NAACP filed legal motions in federal court for a restraining order, which was granted on July 6.

On July 11, three organizations combined for a Black Lives Matter march from adjacent Burlington to downtown Graham, where they held a rally. An estimated crowd of 700 collected at the site of the statue where signs were held, speeches made and songs sung. A group of about 70 counter-protesters holding Confederate flags or signs supporting President Trump stood nearby. There was a lot of shouting back and forth between the two groups, who were separated by a line of law enforcement officers with others stationed on the roof of the courthouse.

In the background, the hum of disturbing social media traffic plays endlessly in our community. ACTBAC issued a meandering and puzzling statement in support of the monument, but incorrectly stated that it speaks for a “vast majority” of Alamance County residents. It also identified the Black Lives Matter protesters as antifa members well paid from an organized source outside our community. That’s hardly true and only props up the latest bogeyman used to counter and discredit legitimate protesters.

Some of the posts or public statements by Alamance County leaders expose racism’s deep roots and inform the community of how much work is ahead to be rid of it. It will take far more than simply moving the Confederate statue from its place at the epicenter of government.

But doing so would be a good start.

Madison Taylor of Burlington is a Stokes County native and a former newspaper reporter and editor who now works as a development writer at Elon University. Read more of his work at mtaylor.blog.