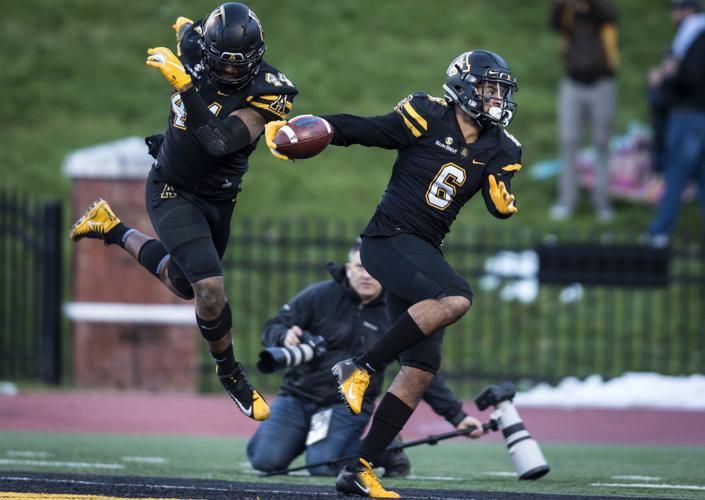 App State defensive back Desmond Franklin (right) celebrates with linebacker Anthony Flory after returning an interception for a touchdown during Saturday’s game against Georgia State in Boone. 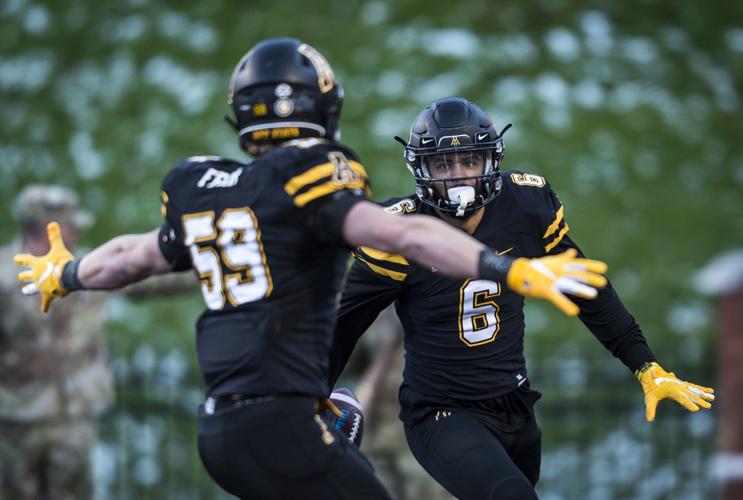 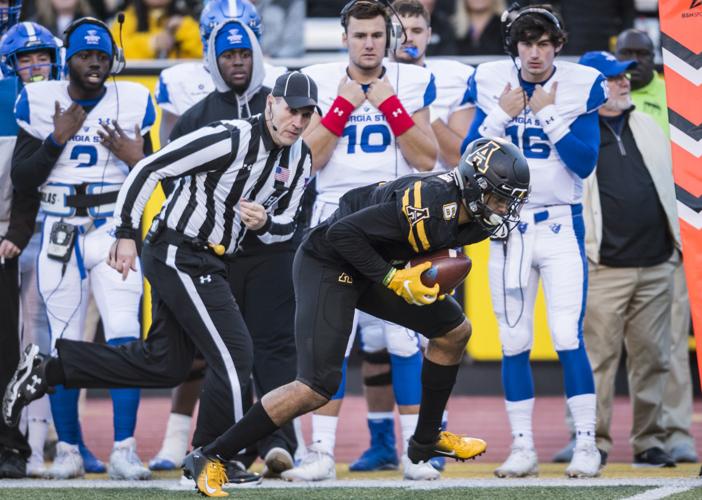 App State junior defensive back Desmond Franklin’s pick six in the third quarter was his first touchdown of the year.

BOONE — Desmond Franklin calls it a product of the Appalachian State secondary’s mentality.

“It” could refer to a couple of things from Saturday’s 45-17 win against Georgia State. First, “it” produced a two-interception game for Franklin, a junior safety.

His first pick, coming early in the third quarter, turned into a 26-yard touchdown return.

But secondly, “it” also describes other plays for the secondary, where near turnovers turned into crashes between two Mountaineers hungry to change possession.

It’s happened once in the past few games, to the dismay of both Franklin and Coach Scott Satterfield.

“I mean, before every game, we always say when the ball’s in the air, it’s ours,” Franklin said. “We turn into receivers.

“And everybody on our defense wants the ball, so when the ball’s in the air, everybody’s just going up for it. And stuff like that happens sometimes when you’ve got a lot of aggressive DBs going for the ball in the air.”

Against Coastal Carolina two weeks ago, fellow App State safety Josh Thomas nearly intercepted a pass against the Chanticleers early. Instead of Thomas grabbing the ball and running down the near sideline, he and cornerback Tae Hayes rammed together to kill the play.

That sequence happened again on Saturday. As Georgia State worked down the field in the game’s opening drive, Georgia State’s Dan Ellington threw toward the far sideline with the Panthers at the Mountaineers’ 33. Franklin and cornerback Clifton Duck converged, bouncing off each other as the ball hit the ground.

In each game, though, guys involved in near turnovers converted later. Thomas picked off Coastal Carolina quarterback Fred Payton in the third quarter, while Franklin made both his grabs in the second half versus the Panthers.

App State has forced at least one turnover in each of its past three games, including two apiece in its past two appearances. Against Texas State last week, the Mountaineers recovered two fumbles on top of Noel Cook’s interception.

And the defense has done just fine with the turnovers it has forced this season — App State entered Saturday as a top-10 unit in both total yardage and points allowed. The Mountaineers have 10 interceptions from cornerbacks and safeties.

Satterfield said the collisions are partially a product of App State’s defensive scheme. The Mountaineers secondary is often in zone. Teams try to attack that by going at the open slivers between defensive backs.

A safety and a cornerback meeting on the field is simply a tight window being slammed.

“It’s a matter of going up and making the play,” Satterfield said. “It’s the timing of it. It’s just freak stuff. Sometimes stuff happens, and it seems like it’s happened a lot for us this year.”

Franklin’s performance carried a redemptive tone. His pick-six in the third quarter was his first touchdown of the year. It should have been his second. Against Charlotte in the second game of the season, Franklin intercepted a pass from quarterback Chris Reynolds at the 49ers’ 47-yard line. He sprinted through the Charlotte offense, sweeping toward the left side of the field.

Franklin was forced to dive at the end zone, trying to stretch out his arms to get the ball across the goal line. Instead, he fumbled the ball through the end zone, resulting in a Charlotte touchback.

That’s eaten at him, Franklin said, mostly because the team continued to bring it up. For him, he felt his performance against the Panthers finally made it right.

“Everybody’s been on me ever since the Charlotte game, when I fumbled it across the pylon,” said Franklin, who has four interceptions and snagged three last year. “I just had to make up for it this year.”

App State defensive back Desmond Franklin (right) celebrates with linebacker Anthony Flory after returning an interception for a touchdown during Saturday’s game against Georgia State in Boone.

App State junior defensive back Desmond Franklin’s pick six in the third quarter was his first touchdown of the year.