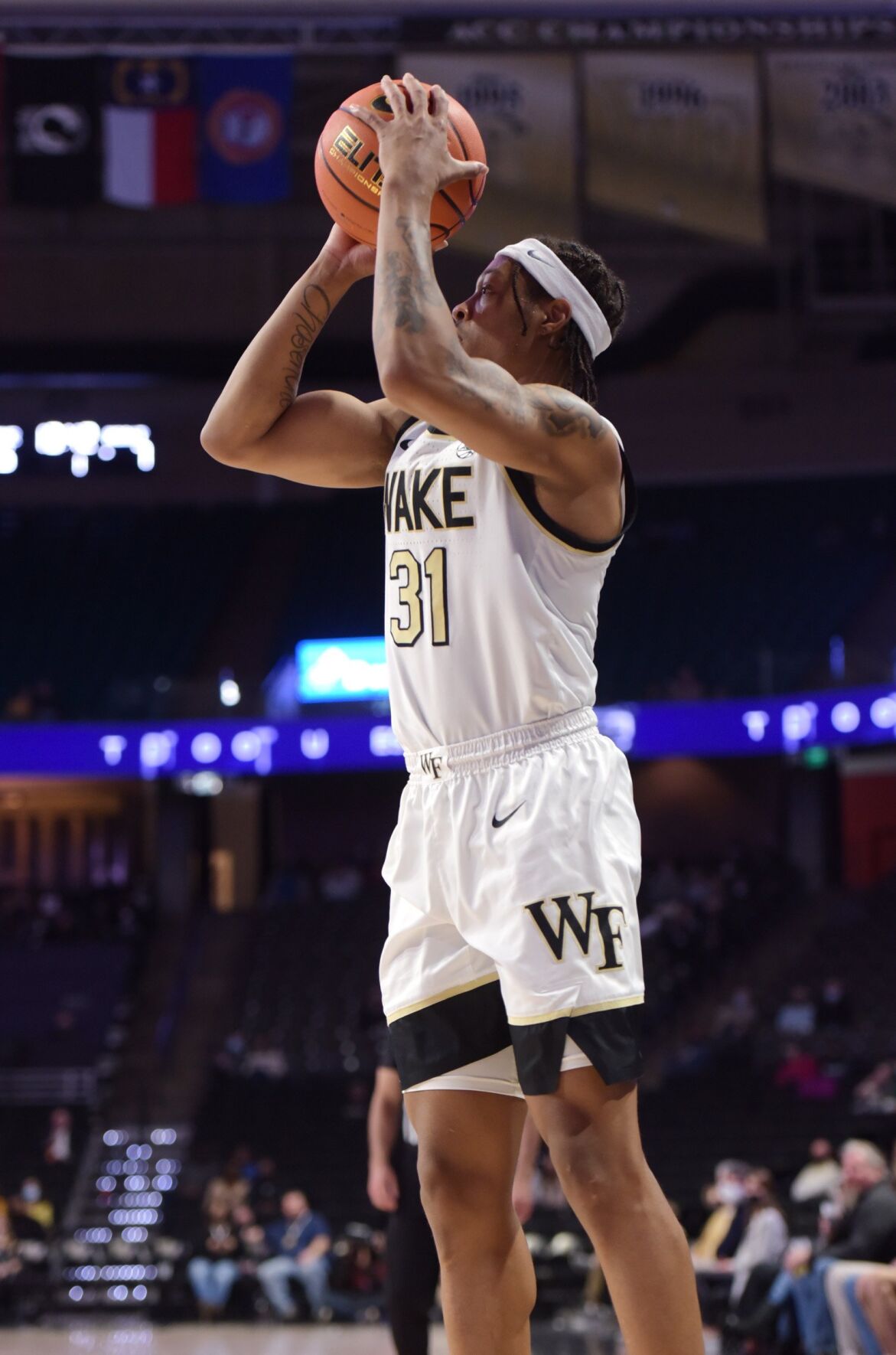 Wake Forest’s Alondes Williams hits a three-pointer in the first half of Saturday’s game against N.C. A&T, at Joel Coliseum. 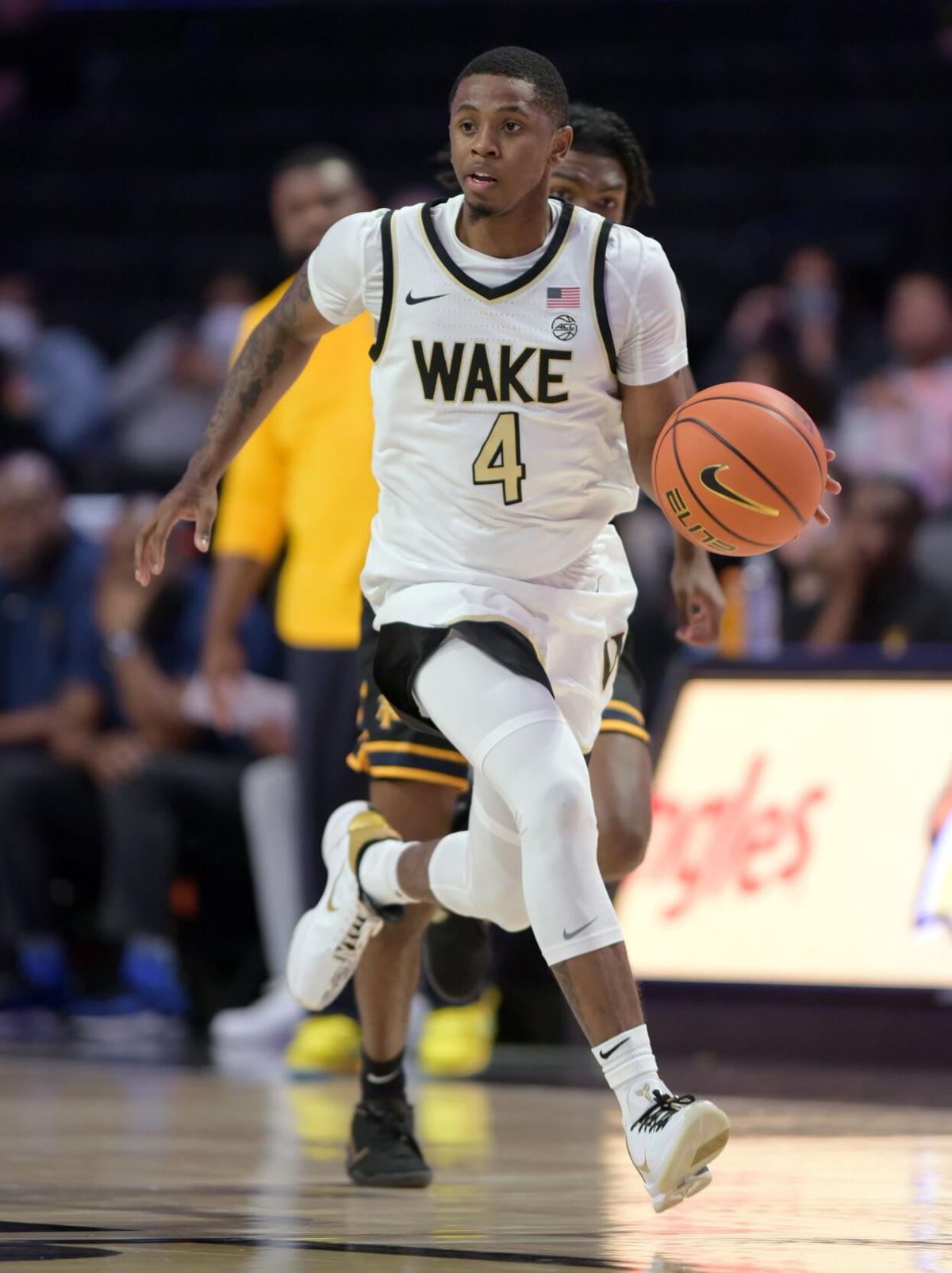 Wake Forest senior Daivien Williamson leads the Deacons in transition in the second half of the Deacons' 87-63 win over N.C. A&T.

DOUG MEAD Special to the Journal

Fast-starting Wake Forest put on another exhibition of deadly outside shooting and rolled past A&T 87-63 Saturday night at the Joel Coliseum.

The Wake Forest-A&T game is part of the Emerald Coast Classic. The tournament will continue Friday on the campus of Northwest Florida State College in Niceville, Fla.

Why the Deacons won

A quick time out by coach Steve Forbes quickly got the Deacons back in control as they answered with a 7-0 run of their own to take a 31-19 advantage.

Wake Forest used another 11-0 run later in the half to all but put the game out of reach before halftime.

Why the Aggies lost

The Aggies not only allowed the Deacons to take one wide-open 3-pointer after another, they also struggled to get back on defense, allowing Wake Forest a number of easy transition baskets.

It was another sparkling performance by the Wake Forest backcourt of Alondes Williams and Daivien Williamson. Williams scored 19 points and Williamson had 18. Isaiah Mucius was also in double figures with 16, despite playing barely half the game. Williams, Williamson and Mucius scored 44 of Wake’s 50 first-half points.

Milton Matthews was one of the few bright spots for the Aggies with 15 points. Demetric Horton added 11 and Webster Filmore had 10. Filmore made all four of his field-goal attempts.

Other teams in the Emerald Coast Classic are Oregon State, Penn State, St Francis (N.Y.), Samford, LSU and McNeese State. Wake Forest will take on Oregon State and A&T will battle Samford in two of the four second-round games on Friday. There will be four more games on Saturday. Coach Steve Forbes of Wake Forest was the coach at Northwest Florida State from 2011 to 2013, where he guided the Raiders to a 62-6 record.

Wake’s Jake LaRavia, who scored a season-high 24 points Wednesday night against Charleston Southern, was not a factor offensively in the first half. He finished with 9 points, all of them in the final 20 minutes. LaRavia led the team in assists with 5 and was 2-of-3 from beyond the 3-point arc.

Mucius scored all of his 16 points in the first half, including four consecutive 3-pointers in a 3-minute span late in the period.

Khaadim Sy, who took a hard fall against Charleston Southern and had to be helped off the court on Wednesday night, appeared back at full strength after suffering a bruised knee. He played 14 minutes and led the Deacons in rebounding with 6.

The two biggest cheers of the night came on back-to-back dunks late in the game. One was by 7-foot-1 freshman Matthew Marsh after stealing the ball at midcourt and the other came on an alley-oop pass from LaRavia to freshman Robert McCray, whose elbows were high above the rim when he slammed the ball through the basket. Marsh is one of two players on the Wake team from England. The other is freshman Cameron Hildreth.

The only area where the Aggies held their own was on the boards. Wake Forest outrebounded A&T by a mere 33-32. The Aggies were able to pull down 10 offensive rebounds, to 8 for the Deacons.

What they are saying

“Our team came out ready to play today, especially offensively,” said coach Steve Forbes of Wake Forest. “We shot the 3 at a high level tonight and did a nice job of sharing the basketball (19 assists on 29 field goals). We got a bit relaxed in the first half because of how easy things were coming to us but we turned it back on in the second half. Tonight was a good team win.”

Lakers forward LeBron James was suspended by the NBA on Monday for one game without pay.

Wake Forest’s Alondes Williams hits a three-pointer in the first half of Saturday’s game against N.C. A&T, at Joel Coliseum.

Wake Forest senior Daivien Williamson leads the Deacons in transition in the second half of the Deacons' 87-63 win over N.C. A&T.