Chandler Greer can’t recall all of his thoughts from the sidelines of the New Orleans Bowl.

But he can remember one, and it was fairly short: “Oh, man.”

That summed up his general feeling early in the game, after Appalachian State stumbled out of the gate against Middle Tennessee State.

The Mountaineers’ first drive ended with an interception, a pass from Zac Thomas that rattled off the hands of Thomas Hennigan. The second ended after three plays when Thomas was hit behind the line of scrimmage.

Greer worried. Was everything finally catching up with the team?

App State was playing against MTSU on Dec. 15. In the two weeks leading up to the bowl game, the Mountaineers experienced the tumultuous nature of college football’s business side. First, they win the Sun Belt Championship game on Dec. 1. Then their old head coach, Scott Satterfield, is hired away by Louisville three days later, and he takes two coordinators and the strength and conditioning coach with him.

Mark Ivey, the defensive line coach for App State at the time, was given the interim tag, but during bowl week, he and the team were told he would not become the program’s next leader. A day after that, Appalachian hired Eli Drinkwitz.

All that before players could even kick off their bowl game.

So on top of trying to outsmart MTSU, the players were trying to fight off the tipping point of turmoil. And furthermore, the players had to watch the remaining position coaches brace for a potential change for their families.

To emerge from that emotional debris, Greer said, the players had to remember a message that offensive line coach Shawn Clark and the other coaches, both departed and present, preached constantly during their careers.

On the field, during the game, it’s the players — not the coaches — who really make the difference.

Focus on the players

A responsibility sat heavy on the eight coaching staff members who took the Mountaineers to New Orleans. There was game planning. There was also the worry of job availability, not knowing whether they might join Satterfield in Louisville, stay with Drinkwitz at App State or have to find something new entirely.

But the most important thing, according to Clark and safeties coach Greg Gasparato, was to make bowl week about the players and the successful season they had.

“The main focus was on the kids and trying to keep the distractions minimized,” Gasparato said. “Probably not eliminated, but minimize as much as we could.”

The coaches did that by barrelling head first into all those uncertainties. While the group couldn’t act like they didn’t exist, they did their best to keep their problems away from the players, according to former wide receiver Brad Absher.

INTERACTIVE: On the coaching carousel, there's little security for those assistants who helped build successful programs

On the afternoon of Dec. 3, App State players learned they would have a team meeting the next day. College football coaching jobs had steadily opened as the Mountaineers won their seventh, eighth and ninth games. Chatter around Satterfield as a candidate for jobs grew. Absher said all the players had a sense of what was coming.

Satterfield leveled with his former team the next morning, boarding a plane bound for Louisville soon after. Ivey stood up as the interim head coach and readied the team for the coming days.

Absher said there wasn’t anger toward Satterfield. For the players, it was one of their own, a former Mountaineer, setting up his family. But there was a pain knowing just how much might change for everyone.

The wide receivers gathered together after the team meeting, much like they always do, and position coach Justin Watts sat down and kept his message simple.

“The first thing that came out of his mouth was, ‘Hey, we’re going to win this bowl game,’” Absher recalled.

Those intentions were true, but it was far more difficult to carry out. Absher said he could see the emotions of the uncertainty taking its toll on the coaches. It’s not like the players are too young to know what was going on. Plus, they also understand what’s motivating their coaches.

During Absher’s five seasons with the program, he hadn’t just gotten comfortable with Watts. He’d developed friendships with his family. Watts would have his receivers over and cook steaks. Lauren, Watts’s wife, would make the players brownies. They’d play with the couple’s two kids.

Those emotional connections made the helpless situation even more difficult for the receivers. So it didn’t matter that Watts wasn’t going to talk about it. Absher and his teammates were going to keep poking at him.

“We’d go into a meeting and one of us would look at Coach Watts and ask him straight up, saying, ‘Hey, are you OK? So what’s the word? What’s the news?’” Absher said. “And the response back would be, ‘You know what, I don’t know. I’m going to worry about that the very next day after the bowl game or whenever the time comes.’”

Obstacles, and then more obstacles, popped up. The first came when the players learned Ivey would not get the job. The second followed a day later, when the team was told someone outside the program, Drinkwitz, would be taking over. To Absher, it was even more important for the players to not look ahead too far. And that’s where last year’s group of seniors came in.

Satterfield always preached the benefits of a player-led team. So did Ivey and Clark, and anyone who played for App State like those three had. That beamed through from Satterfield’s departure onward.

“You can try to force something on people, and that’s fine,” Ivey shared during bowl week availability. “But if the players are making it happen inside out, then you’ve got a chance for it to be successful.”

The Mountaineers leaned on guys like MyQuon Stout, a three-year starter at nose tackle who became the pulse of the team, and Jalin Moore, a running back who saw his senior season end due to injury. The players had only one game left, and that was the only certainty they could see.

Guys like Greer made it a personal mission to put on one more good show for his fellow classmates, and by doing so, it’d be a banner moment for the coaches as well. In the last team meeting on the Friday night before the bowl game, he shared that with teammates.

That thought process helped Appalachian pivot from a terrible start to a dominant performance. The Mountaineers pieced together an explosive all-around showing that turned into a 45-13 App State win.

The Mountaineers would celebrate in the Superdome and travel home to figure out the next steps for the program. Drinkwitz would keep four former assistants from Satterfield’s staff — Clark, Gasparato, Watts and outside linebackers coach D.J. Smith. The other six ended up in Louisville with their old App State boss.

Sitting in his office in January, with his spot on Drinkwitz’s staff solidified, Gasparato talked about the way players responded while reflecting on his favorite thing about his job. For him, it’s all about seeing guys grow.

Scott Satterfield made the other programs wait.

When Scott Satterfield left App State for Louisville, here's how his Mountaineer assistants navigated the transition 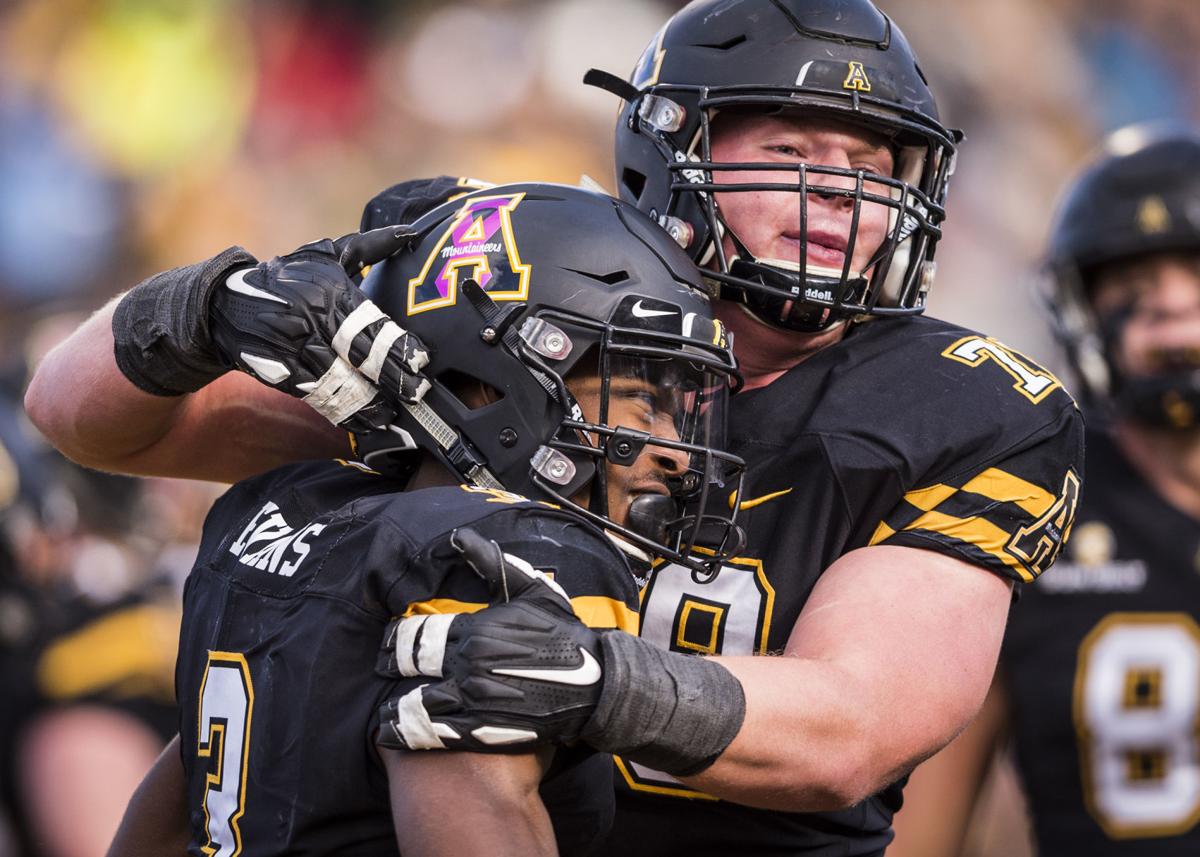 Chandler Greer hugs Darrynton Evans during the 2018 football season. Greer and his Mountaineers teammates had to band together during the postseason, when Scott Satterfield was hired by Louisville and the future of the program was uncertain. 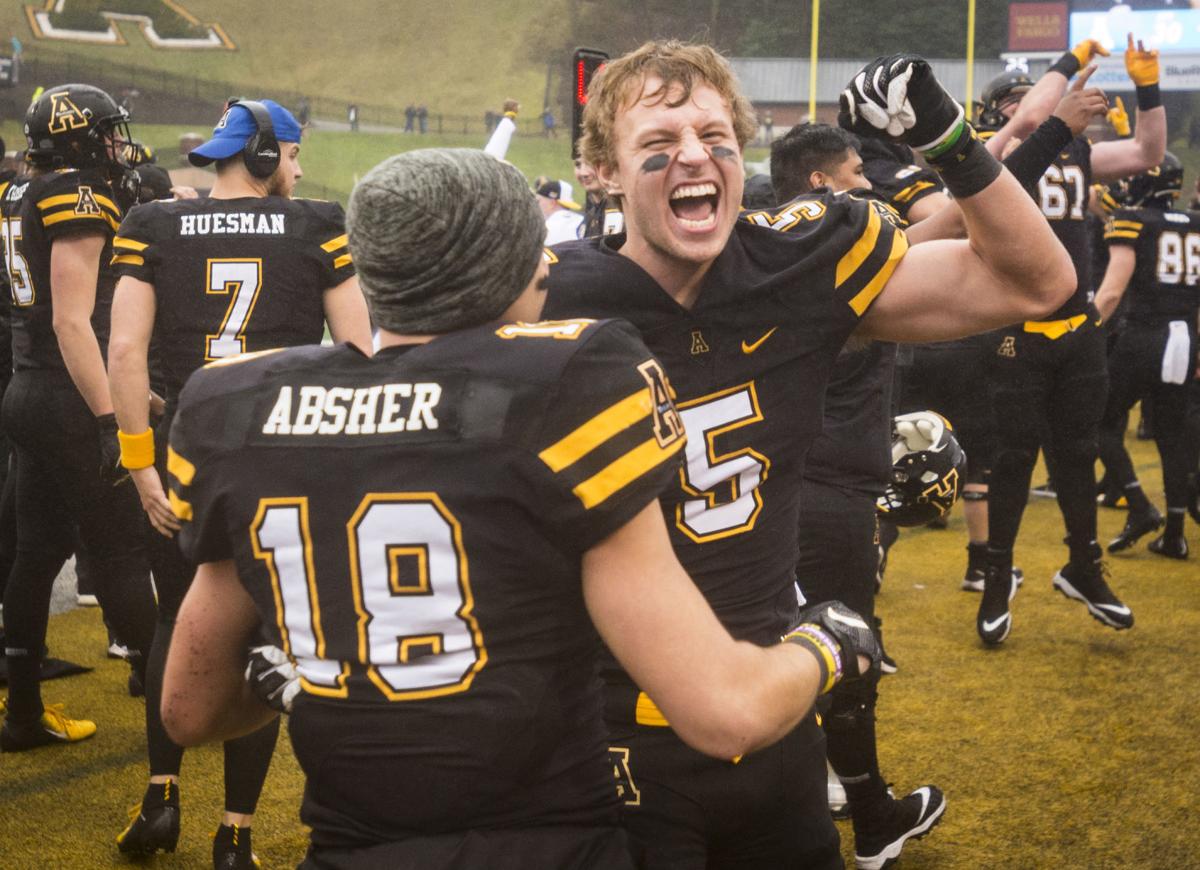 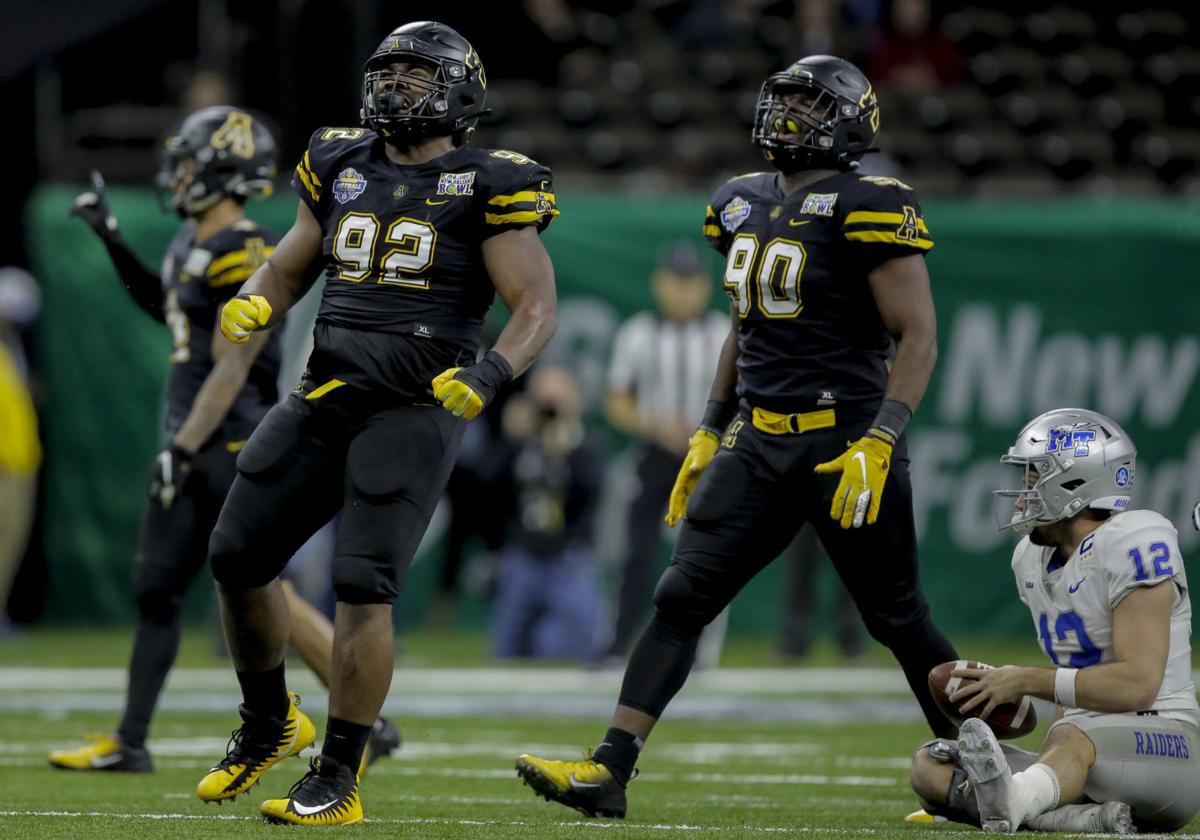 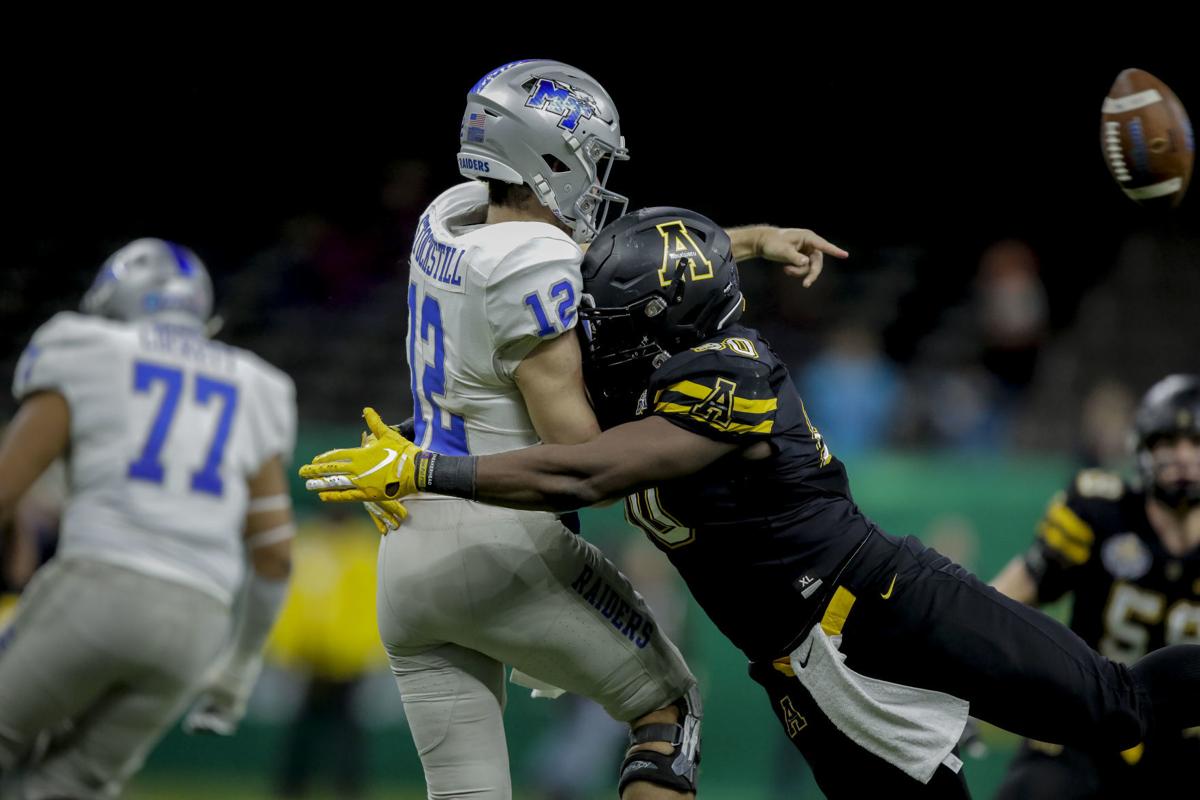 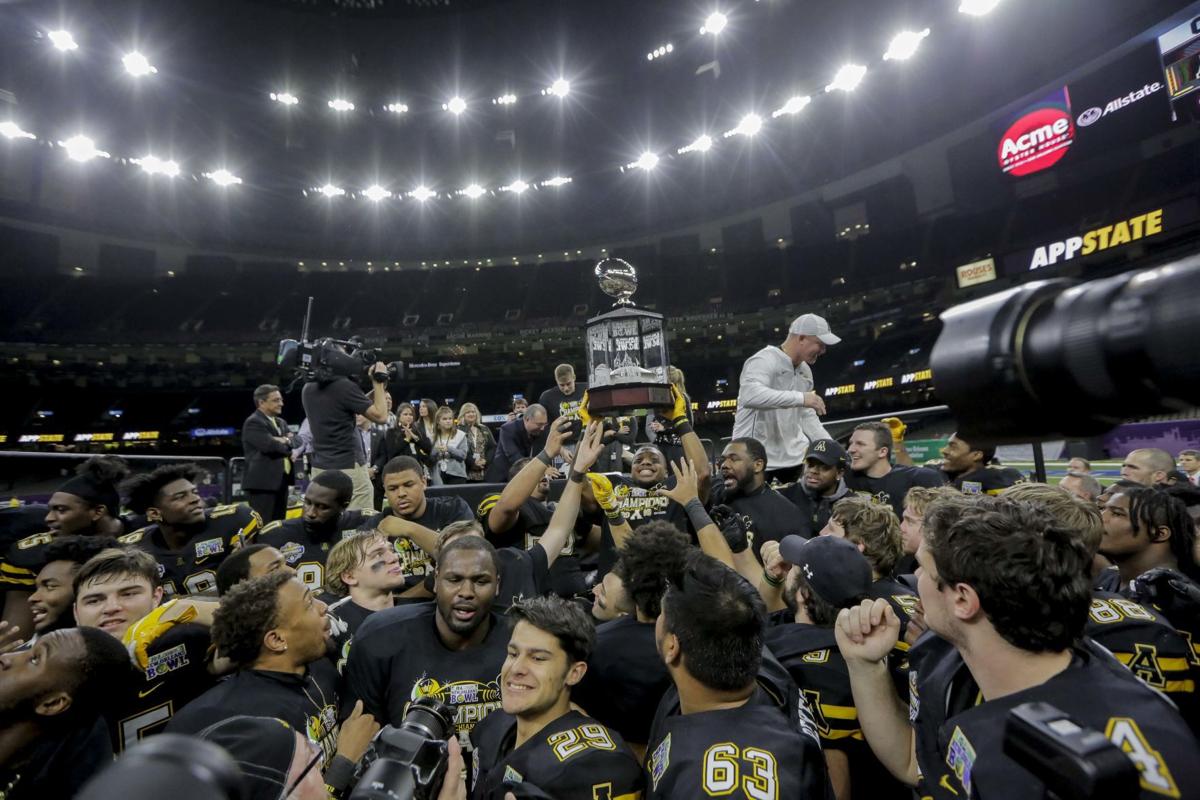