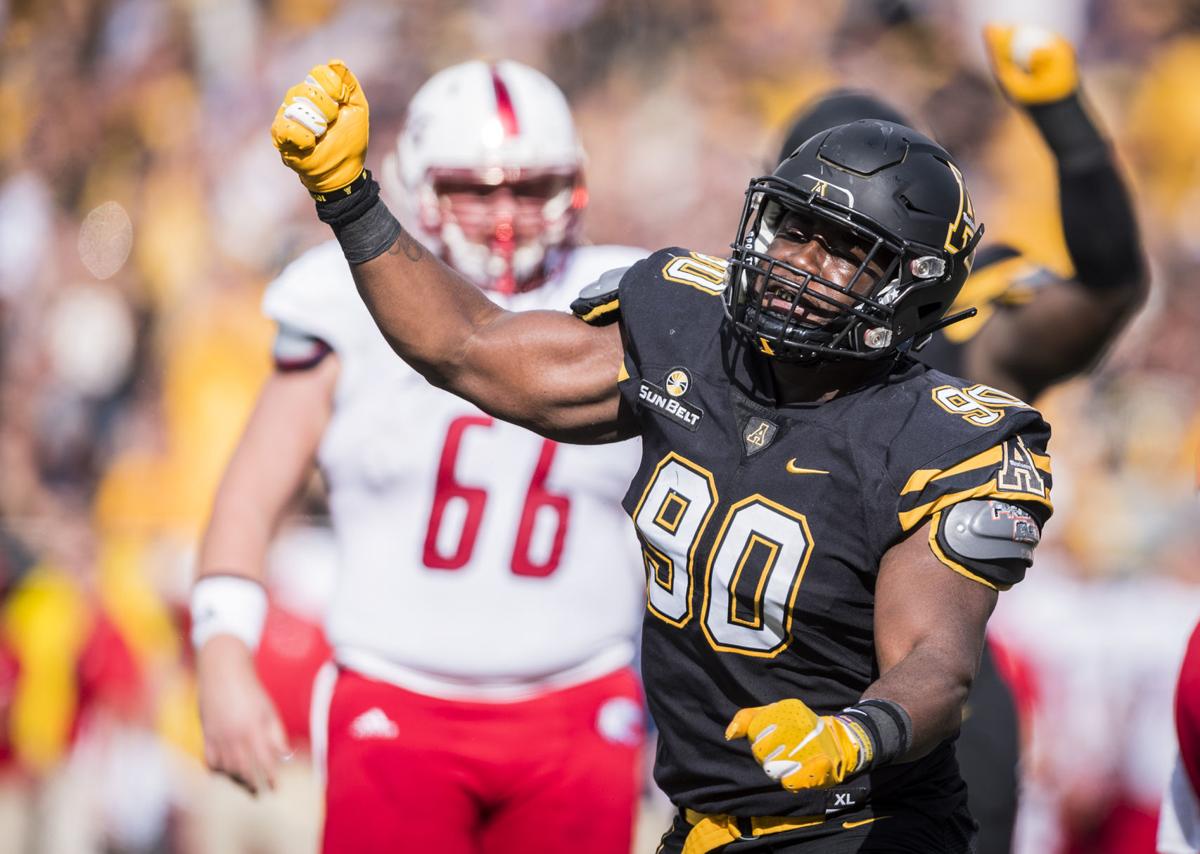 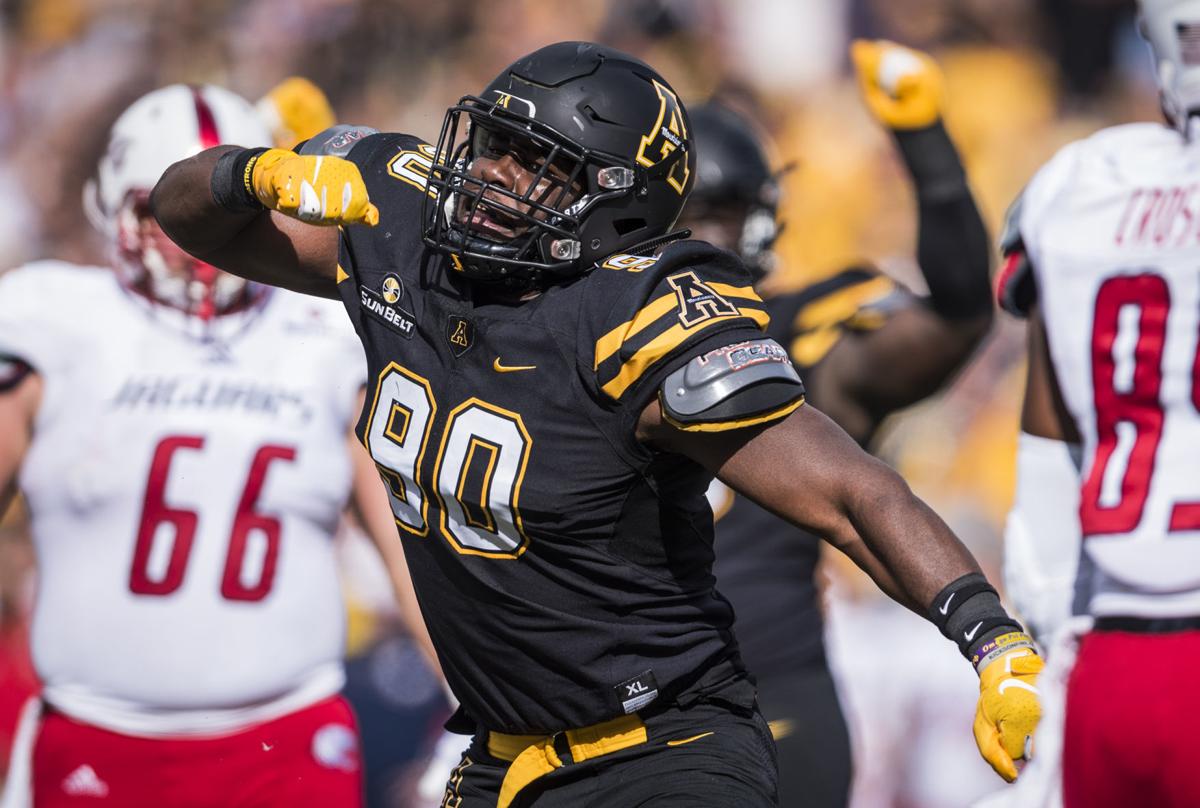 Willis experienced the highs and lows of a college football player. He became a starter as a sophomore during the 2018 season, an 11-win campaign in Scott Satterfield's last year as coach before he left for Louisville. He also missed the 2019 football season, when App State won 13 games — including victories against North Carolina and South Carolina — due to an Achilles injury.

In a conversation with the Journal on Monday, Willis outlined the academic reasons why he's heading to a new school, what he's proudest of from his time at App State, and what it was like being a grad transfer who couldn't take any official visits:

Question: First, let's talk about the options you have as an early graduate. You could've moved on from college, stayed at App State or moved on to another school. What led you to becoming a grad transfer?

Answer: "There was really no motive behind it. After last season, not really being able to play, I kind of realized that there's more to life than just football specifically. So going from there, as the semester started coming back and I realize I'm graduating, I kind of thought to myself like, 'I want to be able to carry on my life after football.' And saying that, it's just an opportunity to reach out, connect and communicate. ... I feel like at App State, there was no bad blood, there was no bad reason for me to leave. My connection and relationships with the coaches are all great and I respect everybody. I feel as if they all respected me. Overall, it was just more of a me decision to say I've made my friends, I've had my time at App State. So now it's time for me to have the opportunity to continue my education somewhere else to build those same connections, or the same or better connections with those people."

Q: What made you go with ECU, and what are you trying to pursue there to set up that life after football?

A: "After getting in the portal, it was a pretty hectic month and change, of hearing from different schools. Ultimately, from the beginning, my only goal was to be able to continue my collegiate football career, but mainly go to a program who has my master's program, and that's higher education with a concentration in student affairs. I felt like I got comfortable being at App and being from North Carolina. I was an hour and a half from home, family's close, friend are close. And it was like I want to do more than just be in the same area. East Carolina gave me the opportunity, they recruited me very well and just kind of gave me the opportunity to come out and play ball for them."

Q: What's the long-term goal for that student affairs angle?

A: "Ultimately I want to be like a player development/adviser-counselor at the collegiate level. Not just necessarily athletes. I feel as though I connect with different branches. Being in a fraternity, being a football player and being a minority at a PWI (predominately white institution), I have different avenues to really help those up under me as far as younger kids and younger adults. I'd like to mentor and kind of guide those people in the right way."

Q: Obviously your grad transfer experience was different due to the COVID-19 shutdown going on right now. What was that like?

A: "It was definitely different. The NCAA didn't allow any official visits anywhere, which was different. Obviously I took that into consideration when I got into the portal, so that was kind of a scary boundary that I was taking on. But overall, I think it was still fairly good. Coaches stayed in contact — a lot more phone calls than normal — several different programs sent me a virtual tour of the campus, the football facilities. I reached out to players at the schools and programs myself to kind of get a feel of what they liked about it and what they didn't, what could make it better, how are the people, culture, lifestyle, things like that. Trying to get a better understanding of it?"

Q: Did you have an expectation for the process? Did you have anyone that had told you about their grad transfer experience, and did that match up at all?

A: "It was nothing like what I expected. It was definitely different. You expect kind of the smaller schools of course, you know hey, it's a bigger guy, and smaller schools want the bigger guy, especially playing at the caliber of App State. But you don't expect the Big Tens calling you, the ACCs. It's like hey, now you realize you're not just an 18-year-old kid coming trying to play for a program, you're a 22-year-old with experience that's almost looking for seniority for a group. There's not many people who leave expecting to play right off. You can definitely see the difference as far as recruiting. It was shocking because I knew a guy at Arkansas State was actually transferring, and I asked him about the process. One thing that really stuck with me is your why is strong enough to remember throughout the whole process. Don't do it because somebody else is doing it, don't do it because somebody else is getting this offer or anything like that. Just make sure you're truly at piece with taking the risk of getting in the portal."

Q: You were sidelined for all of 2019 with an Achilles injury. How's it been coming back from that, and where do you feel like your health is right now?

A: "At first, it was a little shaky. I struggled the first few months as far as rehabbing and trying to overcompensate and do more than doctors said I was supposed to. ... I don't take the game for granted. I understand what's going on, I understand how to play the game, and ultimately there's more to life than just football. I want to be able to go running after football. So you take into consideration injuries, injury prevention, taking care of the body, taking care of your mental health. It's been different, and I definitely overcame a lot, but I definitely feel like I'm past 100 percent."

Q: What was your perspective of watching the school have one of its best football seasons while you're sidelined with an injury?

"I never give a season expectations. You always play it game by game, week by week, just take it slow. Just try to win every week. That's all you can do. Ultimately not playing was a little different. That's my first serious injury where I'm not on the field, so I'm looking at teammates. And I became a vocal leader instead of the guy that's out there actually practicing, trying to do things that motivate people. But overall, it was definitely a different view, but I appreciated it. I don't think you have to go through it to become one with yourself, but when you do and you get a positive view out of it, it's definitely something that helps you out in the long run. I commend all my teammates, my former guys. Nothing's changed. The players at App State are still my brothers. Still rooting and everything or him. It's all congratulations when they're having a successful season, when they've had a successful season, but that's just that. It's different from what you expect."

Q: We covered the academic angle, but what was it about the ECU football program that stood out?

A: "Honestly my decision was based more academically, my education and stuff like that. But overall, I've been that older guy, so transferring from a program where you've got to become a vocal leader when you're already a physical leader, going to ECU it's a lot of young guys. I'm the oldest guy in the room immediately, so now it's really trying to focus on getting the guys along the right path. Good influences, good habits and that respect. Just that grind-and-eat mentality. I can't necessarily say where everybody comes from at ECU, but I know where I come from, and I look forward to bring a different side of not losing."

Q: What are you proudest of from your time at App State?

A: "There's so many. We could sit here all night and talk. You know, from the inaugural conference game, to you know, just bonding with teammates. You see guys come and go, but there's not too many people who have stuck around all the way through it. For me to graduate, it was obviously a blessing. It's' much respect to Coach (Scott) Satterfield, (Mark) Ivey, guys that I came in with. Even Coach Clark. He's been a guy that's stuck through three coaching changes. It's definitely different, but you respect it as what it is, which it's a business. It's just peace and tranquility from App State. From the coaching staff, the academic staff, the strength staff, teammates. It's too many memories to just name one. But overall, you just keeping moving forward.

App State's Frank Ponce on what brought him back to Boone, his QB room and more

The Mountaineers' offensive coordinator also discusses Scott Satterfield and the use of last season's game video.

App State's outside linebackers coach no longer with Mountaineers program

Appalachian State is looking for a new outside linebackers coach after a recent departure in its football program.

Chase Brice, former ACC quarterback, on App State: 'That's the kind of people I want to be around'

The former Clemson and Duke quarterback says Appalachian State's system has similaries to the Tigers' system.