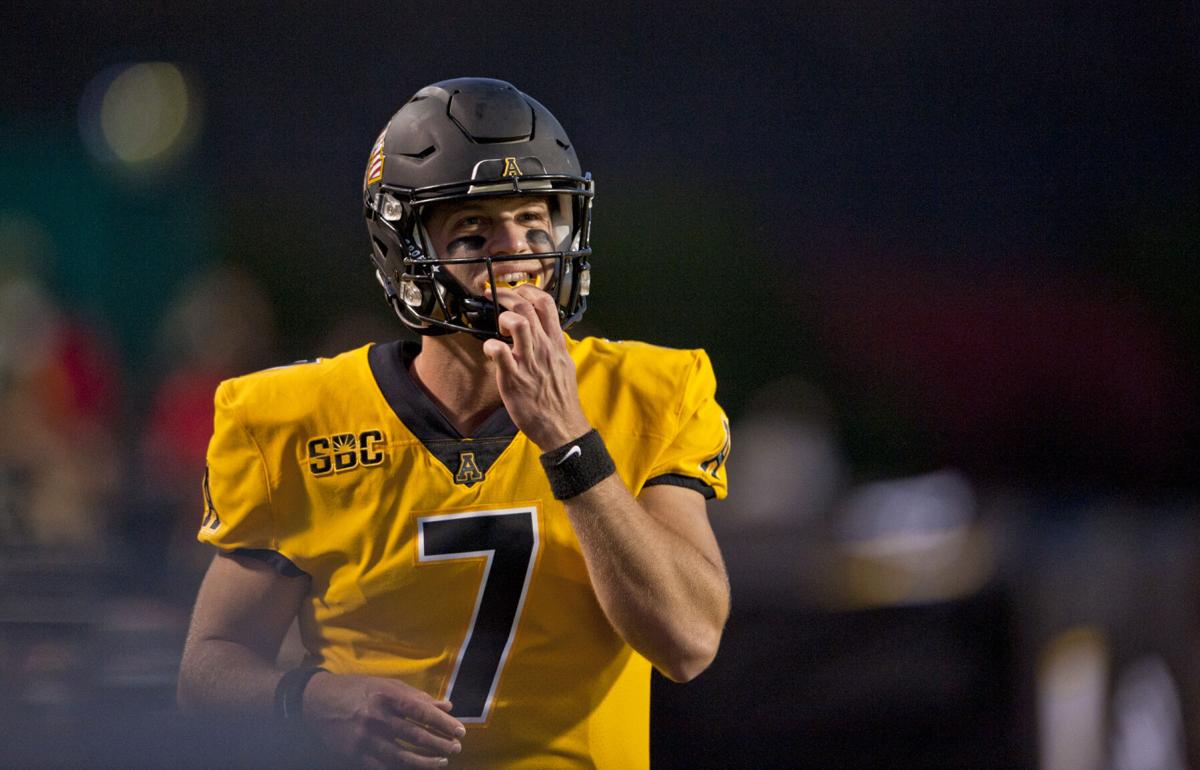 Appalachian State quarterback Jacob Huesman prepares to retake the field in the second half of Saturday's game at Kidd Brewer Stadium in Boone. Huesman went in for an injured Zac Thomas. 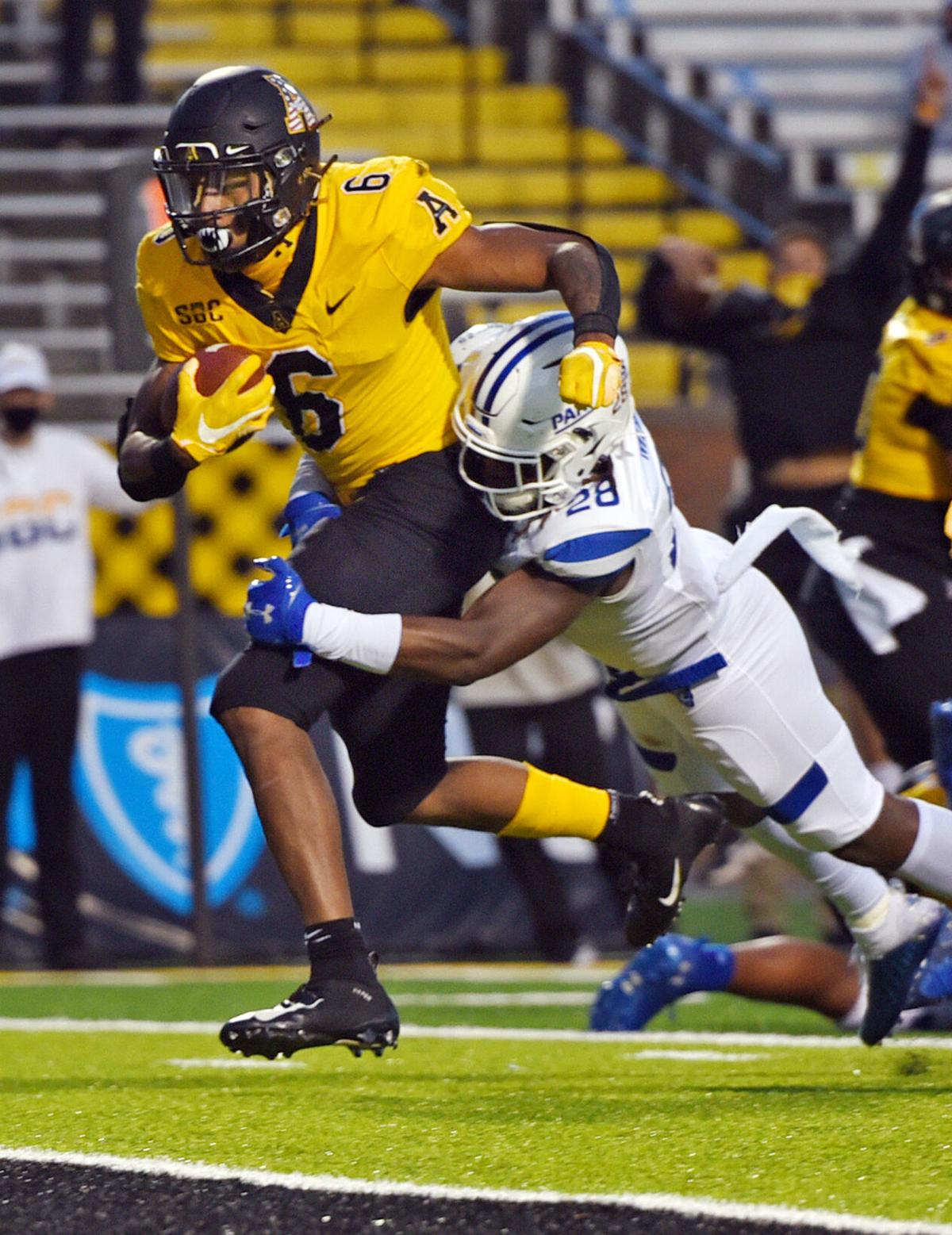 Appalachian State running back Camerun Peoples drags Georgia State safety Chris Moore with him as he scores a touchdown in the second half at Kidd Brewer Stadium in Boone. 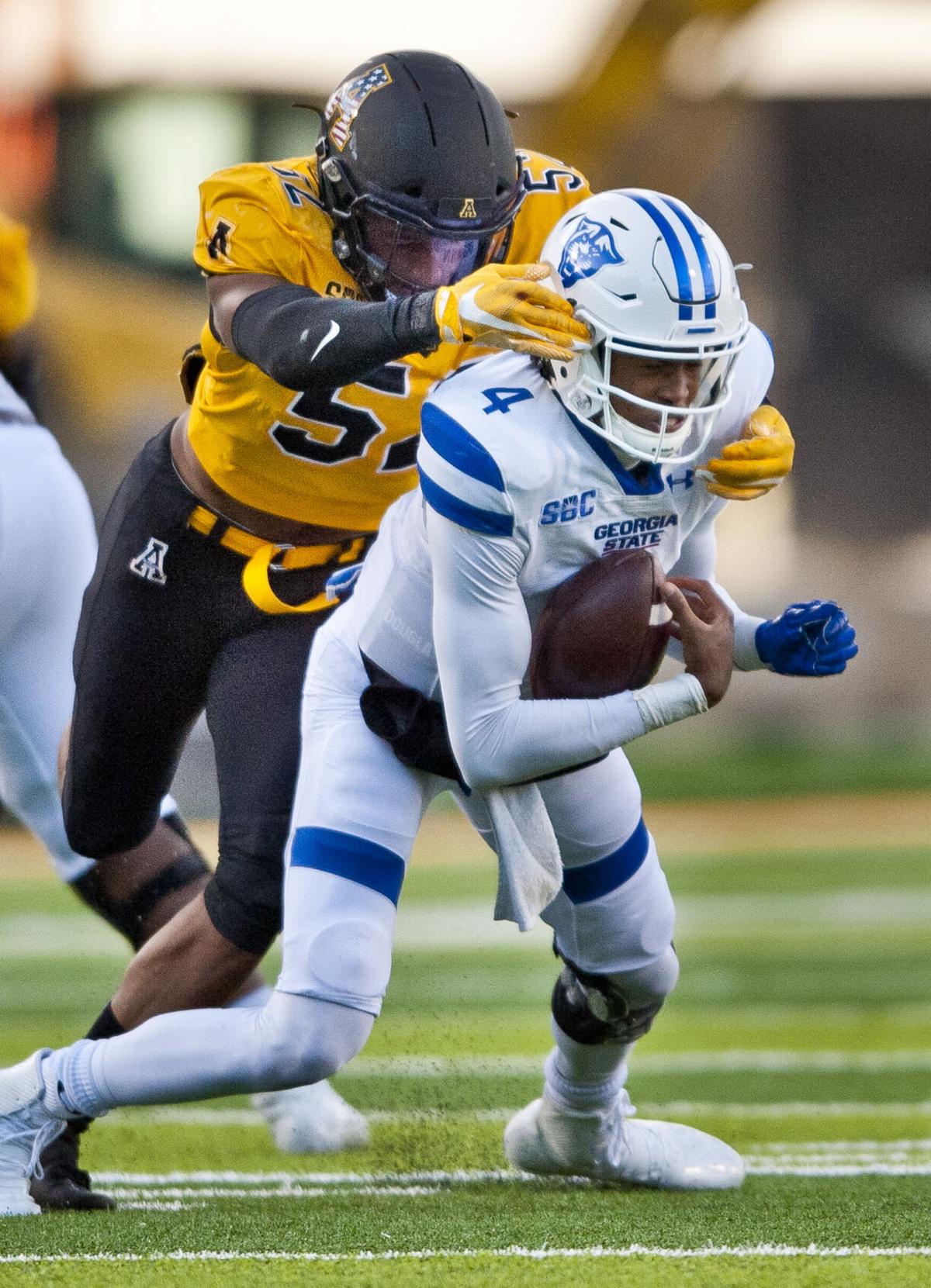 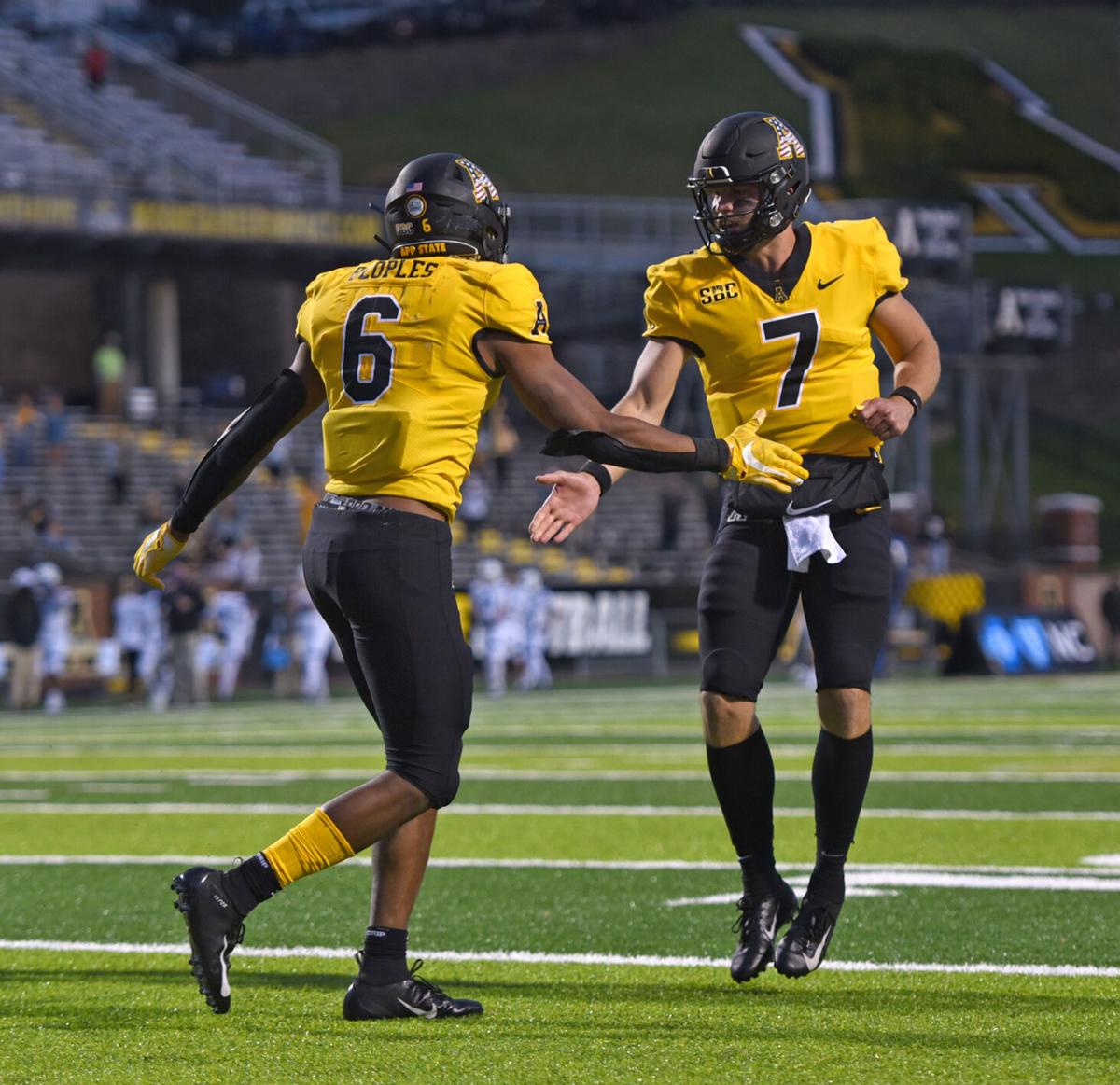 Appalachian State running back Camerun Peoples (6) and quarterback Jacob Huesman celebrate after Peoples' touchdown in the second half of the Mountaineers' 17-13 win in an NCAA football game, Saturday, Nov. 14, 2020 at Kidd Brewer Stadium in Boone, N.C. (Walt Unks/Winston-Salem Journal)

BOONE — The sounds didn’t fit together.

When Appalachian State found its go-ahead score on Saturday, taking a 17-13 lead against Georgia State, the Mountaineers’ fight song started to blare through Kidd Brewer Stadium. But at the same time, an ambulance turned up Stadium Drive, lights flashing and looking for the best entry spot on the field.

The ambulance was for Zac Thomas, App State’s starting quarterback, who had been hit hard earlier in the drive as he ran out of bounds. The series was finished off by his backup Jacob Huesman, who authored the score with around five minutes left to put App State in control.

The good news, from the mouth of App State coach Shawn Clark, was that his quarterback was OK. Thomas had feeling in all of his extremities, and the trip was precautionary. App State athletics confirmed later Saturday that Thomas had been released from the hospital.

But the moments of worry and triumph clashed for Clark and the rest of the team as they moved to 6-1, remaining undefeated in Sun Belt Conference play before a showdown at undefeated and No. 15 Coastal Carolina next weekend.

“It was tough,” Clark said of trying to pay attention to Thomas and the game. “Anytime your captain, quarterback of your program, gets hit and is laying there, it’s tough.

“ … But what this program is about (is) next-man up mentality. Very happy for Jacob Huesman. Jacob Huesman’s been a backup here his entire career, and he’s practiced like a starter every single practice. And I know myself and Coach (Tony) Petersen has talked about this a bunch, but he was ready when his number was called, and he came in and really won the game for us.”

App State struggled to move the ball on offense all day. The Mountaineers registered 310 total yards, including a 131-yard performance on the ground for a team that prides itself on its running ability.

The team managed a tying score late in the third quarter, with Thomas hitting Malik Williams for a 55-yard reception and followed it with a 9-yard touchdown catch to Henry Pearson right after. And after the Panthers took a 13-10 lead in the fourth quarter, Thomas looked to lead another scoring drive.

With 9:28 remaining, Thomas started a drive with a 15-yard rush. Two plays later, he connected with Miller Gibbs for a 16-yard reception. And the next play changed everything. Thomas scrambled toward the App State sideline and was hit out of bounds by Georgia State’s Dontae Wilson. Both went flying into the idle Mountaineers, and the scene shifted to scary fast.

Thomas was surrounded by trainers and team doctors. Teammates wandered over to check on him. When it became clear that Thomas wouldn’t re-enter, Huesman took off his headset and signaling gear and grabbed his helmet.

While Thomas was tended to, Huesman had a drive to finish. He got no warm-up throws but didn’t let it phase him.

“You can’t tell yourself like, 'Oh I’m’ not even warm, hopefully they don’t call a pass,’” Huesman said. “It’s got to be one of those things where some self-belief, some confidence to yourself, that regardless of what's called, you're going to get it done.”

First, Huesman threw a 12-yard pass to Cam Peoples. Four plays later, he threw a 14-yard strike to Thomas Hennigan for a first down that kept the series alive. That play set up a 12-yard run by Peoples, followed by a 10-yard score by the redshirt sophomore.

Peoples said Huesman commanded the huddle immediately, and he felt like it set the team on the right course.

“He always has good energy, and he’s a very hard worker,” Peoples said. “So it’s easy to step behind some guys that you see working very hard like that. And it’s easy to get behind the type of guy and keep the energy that he brings to the huddle. It definitely helped spark the offense a little more, especially with Zac going down.”

After the go-ahead touchdown, teammates wandered over periodically to check on Thomas before he was taken away. At one point, Noah Hannon, the team’s starting center, kneeled at Thomas’ feet and put his head down in prayer.

Thomas was loaded onto a spinal board and then placed on a stretcher before he was eased into the ambulance. A few minutes later, the game ended. Clark said the locker room was initially somber. But once he told the team that Thomas was doing fine, he also reminded them of the need to celebrate the win.

Huesman, who has one start and 52 pass attempts to his name, earned a game ball after sealing a win that seemed in doubt for a while.

“At the end of the day, these are the things you’ve got to prepare for,” Huesman said. “Whether you’re a freshman, a senior like myself , a fifth-year guy, backup quarterback, you just got to be ready. You’ve got to be ready at all times. When you’re number's called, it’s time to go.”

A recap of Appalachian State's 17-13 football victory over Georgia State.

Appalachian State quarterback Jacob Huesman prepares to retake the field in the second half of Saturday's game at Kidd Brewer Stadium in Boone. Huesman went in for an injured Zac Thomas.

Appalachian State running back Camerun Peoples drags Georgia State safety Chris Moore with him as he scores a touchdown in the second half at Kidd Brewer Stadium in Boone.

Appalachian State running back Camerun Peoples (6) and quarterback Jacob Huesman celebrate after Peoples' touchdown in the second half of the Mountaineers' 17-13 win in an NCAA football game, Saturday, Nov. 14, 2020 at Kidd Brewer Stadium in Boone, N.C. (Walt Unks/Winston-Salem Journal)