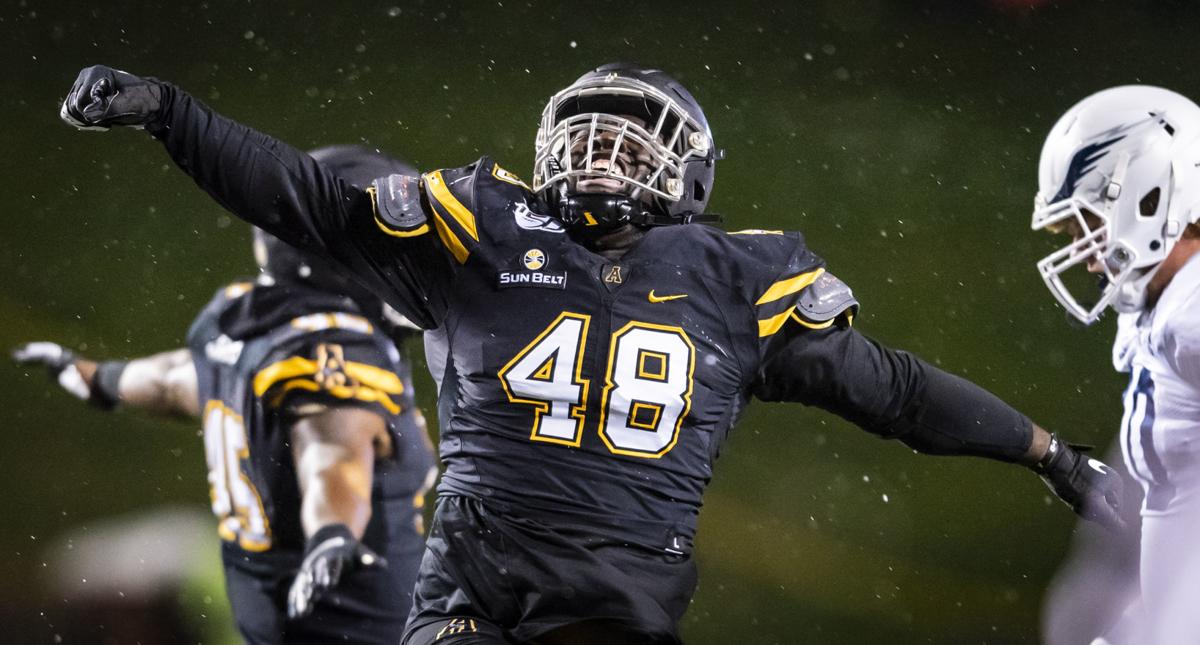 Appalachian State defensive lineman Demetrius Taylor during a game in 2019. 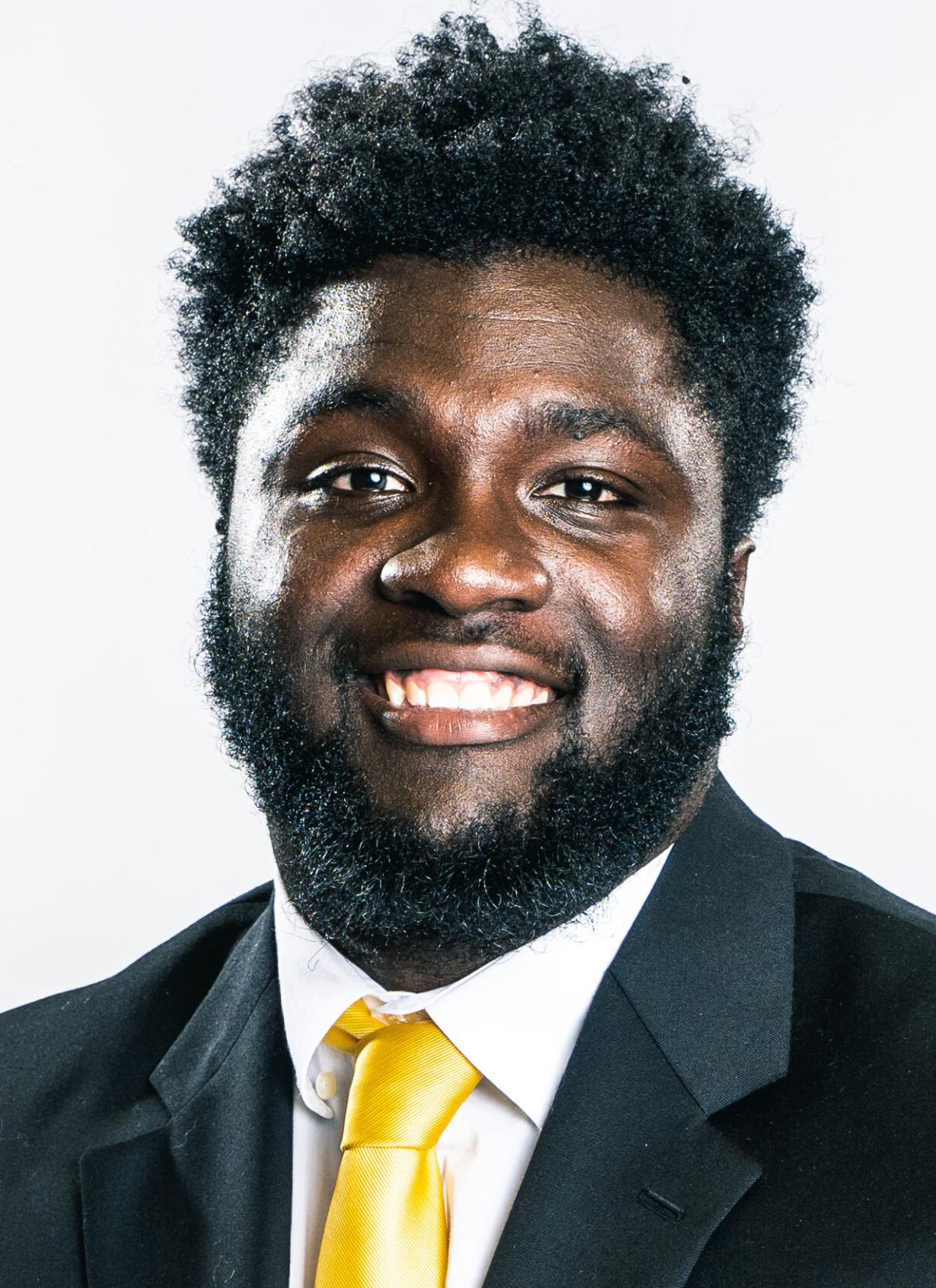 The Appalachian State defensive end could point to a handful of reasons for why he decided to stay in Boone for one more season. But a big one came to mind.

“There’s a lot of stuff piling on top of you,” Taylor said. “I had gained weight. Mentally, I wasn’t here.”

There were plenty of reasons why. Off the field ahead of the 2020 season, Taylor encountered major life moments, both good and bad: His mother died unexpectedly in April 2020, and two months later he welcomed twin sons into the world. Then a COVID-19 quarantine resulted in no type of football warmup, making him play catchup for the first half of the season.

So when the Mountaineers finished their 9-3 season, and Taylor considered which way to go with his life, he felt like he deserved a chance at one more college season with a healthy mind and body.

“Learning about the process, going into the NFL, you’ve got training and this and that,” Taylor said. “I just wouldn’t have been able to do it. So I say they blessed us with the COVID year because it’s a sign you could come back or if you think it’s time to go, then go. But obviously for me, it was a sign for me to come back because I played all four years. I didn’t have a redshirt year.”

This redshirt year is set up to be a great one for Taylor, starting with Thursday’s season opener against East Carolina at Bank of America Stadium in Charlotte. Taylor is feeling locked in mentally again. On top of that, he has trimmed down to the weight at which he played in 2019, when he established himself as a pass-rushing menace.

Taylor registered seven sacks, 13 tackles for loss and three forced fumbles in 2019, helping the Mountaineers grab a 13-1 record under then-head coach Eli Drinkwitz. He entered spring practices as one of the Sun Belt Conference’s best defensive linemen. Then COVID-19 caused a shutdown in everyone’s lives.

That only started the dynamic shifts for Taylor. On April 12, the morning of Easter, Taylor learned his mother, Yolanda Whitehead, died in her sleep. She was 37 years old. He spoke for the first time about her death a few months after in a short documentary produced by former teammate Elijah Diarrassouba.

Diarrassouba, a Page High School graduate from Greensboro, traveled to Taylor’s hometown of Miami to talk to Taylor, his grandmother and other family members.

“That was the reason for it, really: as long as somebody was able to understand that he’s more than a player,” Diarrassouba told the Journal last year. “He’s a human, and he’s different. He overcame a lot.”

Taylor called Diarrassouba’s project an outlet, but he had little time to process: He became a father on June 28. He began the balancing act of dad and college football player while the season was still uncertain. Excited to be a dad but sad that his children would never meet their grandmother, more weight accumulated on Taylor’s mind.

Just ahead of 2020 preseason camp, he got COVID-19. He said his return to football activity was the team’s season opener against Charlotte. Up to roughly 310 pounds, he could see himself struggling when he watched film.

“You see it in the games,” Taylor said. “I got chances to catch quarterbacks. When I usually could catch them out of certain moves, I couldn’t catch him. I was getting out-run. I was tired.”

Yet with all these different pressures on him, he still found a way back to form. When the Mountaineers came out of their COVID-19 shutdown, which spanned roughly a month between games against Campbell and Arkansas State, Taylor registered at least a sack in four of the team’s first five conference games. The way Taylor closed out inspired his goal for this season: He wants to register double-digit sacks.

A return to the normal offseason training – summer workouts and a full preseason camp – made him stand out to his coach when the team started its on-ramp to this football season. He feels like he has his explosiveness and lateral quickness back.

“He wasn’t the same player he was last year,” App State coach Shawn Clark said of Taylor. “Now he’s down to 285, and he looks like the player of old.”

This offseason, Taylor finally found chances to breathe again. At least as often as fatherhood allowed it. He also found a moment to grieve.

The Mountaineers have a tradition for every preseason camp. They give senior talks during the team’s first couple of weeks, where every player approaching their last year gets up to tell their story. When Taylor spoke, he pointed out that his mother was his hero. In front of the whole team, he finally let some emotion out. He realizes he will never get over his mother’s death, but he felt that day marked a milestone.

“That’s when I really got a chance to sit down and cry about it and stuff like that,” Taylor said. “That’s the point when I was like, ‘OK I’m good now.’ It’d just been pent up so long, I just never sat down and let it out.”

With the chance to focus on football, and the ability to have fun playing the sport again, Taylor wants to use 2021 to dispel any remaining NFL doubts, especially regarding his size. The hero of the North Carolina game in 2019 – where he forced a fumble and returned it for a touchdown, intercepted a pass by Heisman Trophy hopeful Sam Howell and registered 2.5 sacks in a 34-31 Mountaineers win – is planning to remind everyone watching what he can do.

“I take it personal because we obviously play some big schools that go against the ideal-sized end or whatever, and they still don’t have as much success as I have going against those big guys,” Taylor said. “We’ve got some big offensive linemen in our conference, and I do a damn good job of doing my job against those guys.

“So it’s just like, the numbers don’t lie, the film doesn’t lie. So why do you keep knocking my size? … Football is football. You’re either going to be good at it or you’re not, in my opinion. And obviously I’ve been good at doing what I’ve been doing the last couple years.”

No. 14 Coastal Carolina to visit Appalachian State on Wednesday night

Appalachian State defensive lineman Demetrius Taylor during a game in 2019.