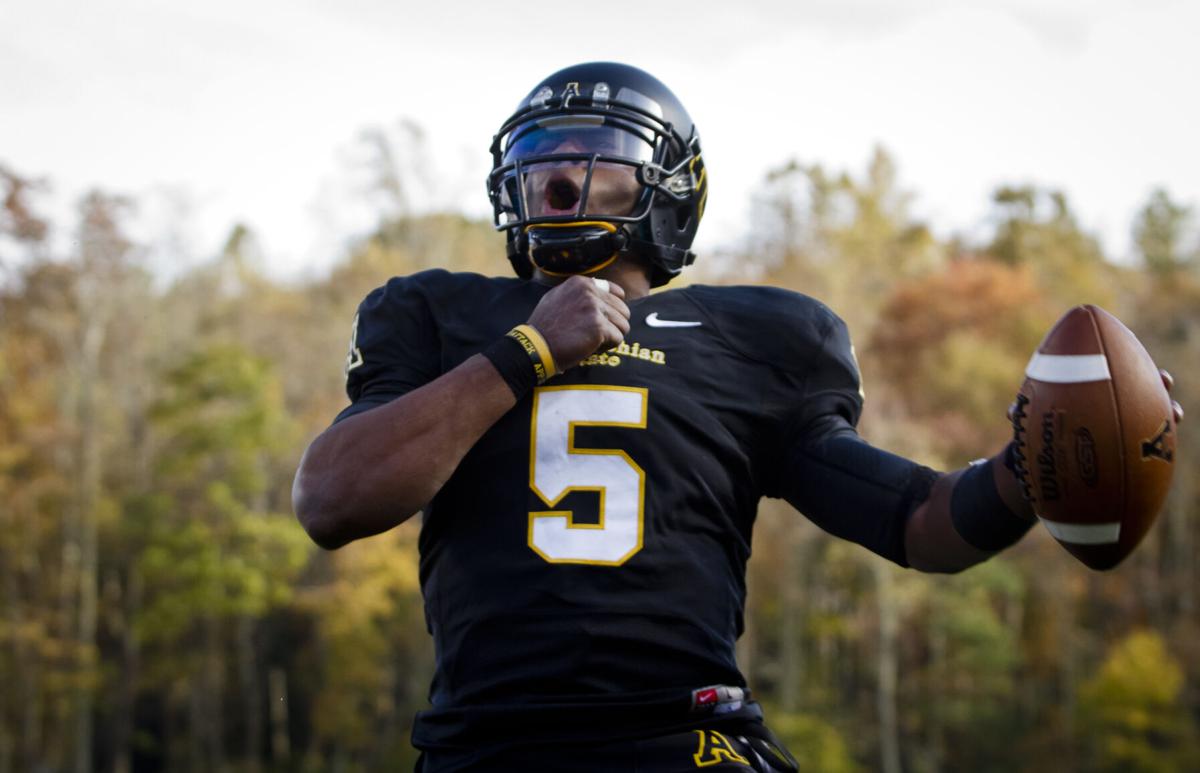 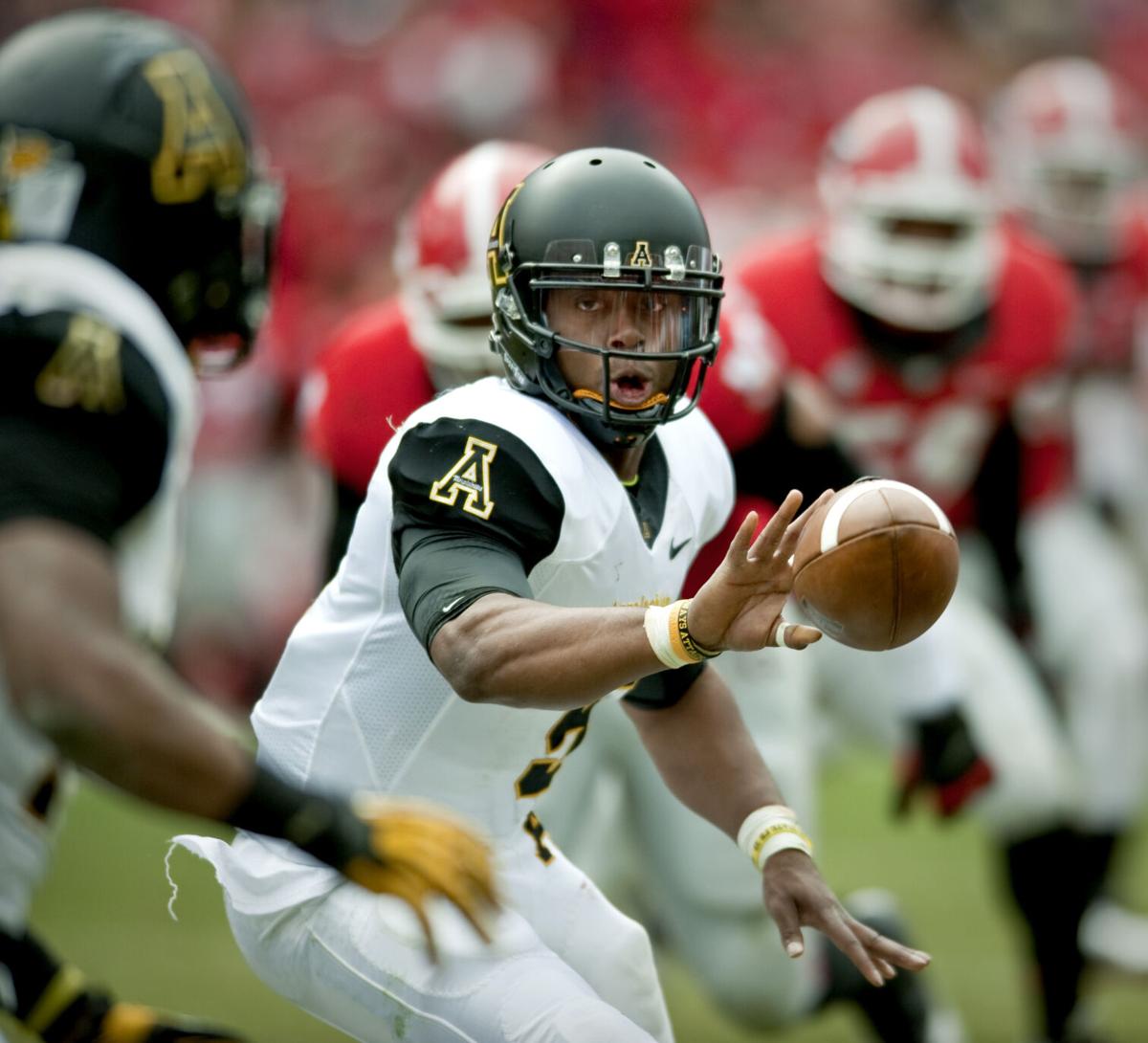 App State quarterback Kam Bryant set a school record for completion percentage in a season in 2013. 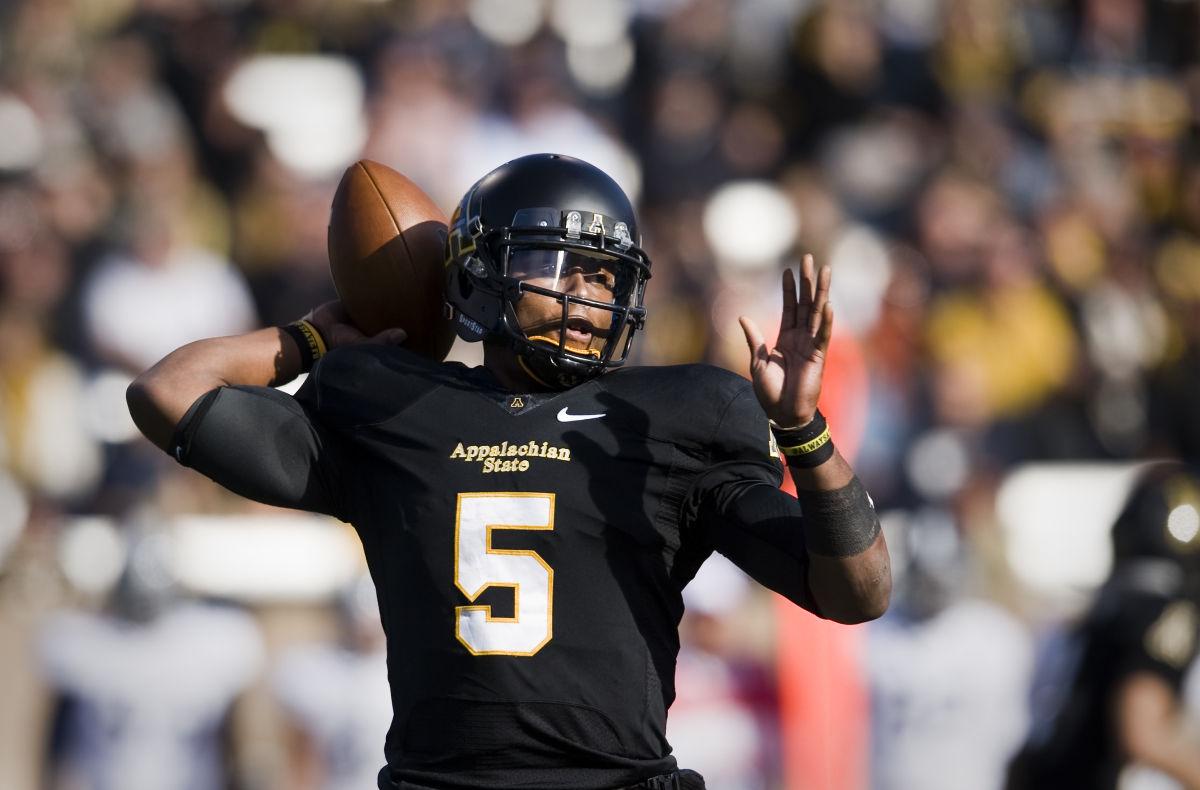 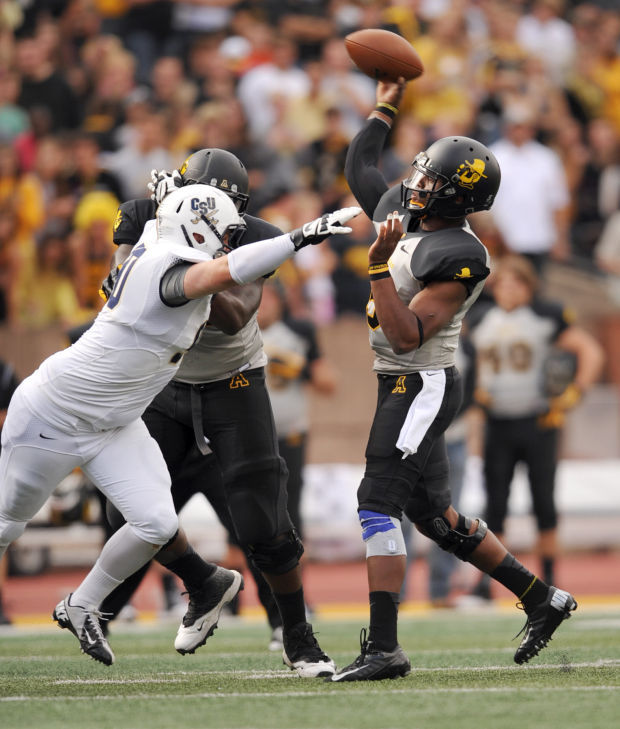 Kam Bryant of Appalachian State took over as starting quarterback against The Citadel.

If there’s proof of how badly Kam Bryant wanted to play, even while he was in the middle of Appalachian State’s worst football season of the last 20 years, it was on his right hand.

The former Mountaineers starting quarterback said he had two broken fingers, one being his index finger, and kept quiet about them so he could finish out the 2013 season.

“There’s actually pictures with me, tape around my fingers,” Bryant said. “I didn’t tell anybody. I just tried to choke it off with the tape so I just couldn’t feel it.

“So I was numb on my throwing finger for probably the back five games of that year.”

Bryant, 27, now lives in Washington D.C., and is five years into a career with New York Life Insurance Company. He played three seasons at App State, transferring to Campbell to play his last season in 2015.

His last start as App State’s QB, funny enough, came against Campbell too. Those two programs square off again today for the first time in six years.

At the time Bryant joined App State in 2011, the Mountaineers' quarterback position was booming. The days of Armanti Edwards still resonated. De’Andre Pressley was coming off a strong debut season, and Jamal Londry-Jackson was waiting for his chance to play.

Bryant saw an opportunity where, if he did it right, a professional career could blossom. He redshirted in 2011, then played only 13 snaps before tearing an ACL in 2012, an injury that he said was one of the best things to happen in his young life.

“I remember talking to Coach (Jerry) Moore, and him telling me — I think it was the year before — ‘You need to be ready before it’s time for you to be ready,’” Bryant said. “And I remember him telling me that, and I didn’t understand it until it was taken away.”

When he returned to the field, he had to impress a new coach. Scott Satterfield returned in 2012 as the program’s offensive coordinator. But thanks to the injury, he didn’t get to see Bryant play much. Satterfield became the head coach before the 2013, and Bryant realized he needed to prove himself.

He secured that backup role behind Londry-Jackson, who was coming off an explosive season. However the program, starting its transition from FCS to FBS, struggled immediately.

First the Mountaineers lost to N.C. A&T. Then came another to Charleston Southern. Laundry-Jackson couldn’t find his old form, and the Mountaineers turned to Bryant. He started three straight losses before a win against Georgia Southern, 38-14.

Bryant finished that year by setting the school record for completion percentage in a season, connecting on 71.2 percent of his passes. He owns the career mark (69.2) as well. He threw for 2,713, with 14 touchdowns and four interceptions.

The Mountaineers went 4-8, the first losing season since 1993. It was their last season in the Southern Conference. Career achievements didn't sooth that, Bryant said.

“It was really hard, and getting off to a rough start didn’t help,” Bryant said. “When the coaches are trying to sell that we still got to go play football, we need to perform, we need to look good, and these things and you get off to a rocky start, you can’t have the speeches about saving the season.

“They kind of go out the window. It’s just strictly a pride thing.”

The 2013 season became the casualty of the long view, trying to prepare for a move up into the Sun Belt Conference. The defense was young and under first-year DC in Nate Woody. Bryant was forced into an awkward situation by replacing his friend — "it was Jamal's team," he always says — a situation he faced again the following season by the development of Taylor Lamb.

Lamb emerged during camp, and he led a long touchdown drive at the 2014 season opener at Michigan. Bryant made his final start, a 66-0 win against Campbell, the next game before Lamb took over starting duties.

Bryant dropped back again into the backup role. The team started 1-5, but surged at the end with six straight wins. Lamb went on to start 49 games total in his career, setting the school and Sun Belt career records for touchdown passes. Bryant watched Lamb cement his spot at the position, and as he did, realized he'd have to play elsewhere for a chance to start again.

He waited until the end of the year though, so that way, if Lamb got hurt, he could step in again temporarily and save the redshirt of J.P. Caruso, a true freshman quarterback on the team at the time.

“If I did leave and something did happen to Taylor, well now this kid is losing a year because I selfishly wanted to leave because I lost the job in Week 2,” Bryant said of the transition to Lamb. “I think all those things played a part in that. But definitely having experience and being on the other side and trying not to make it awkward.

“It’s enough taking over as quarterback at Appalachian State, a freshman. He didn't need any help or noise from me causing any friction anywhere.”

Bryant made his way to Campbell, and he started work on the next phase of his life. The guy that numbed his fingers just to play, who accepted a promotion and demotion on the football field, has enjoyed watching his two former programs carry on.

App State's rattled off four straight Sun Belt titles, and he's now getting to watch his other former head coach, Mike Minter, lead the Camels through their still-young life as a Big South team.

“I think the program’s really changing down there,” Bryant said. “He’s doing a good job and happy to see them really being a little bit better.

The Mountaineers will conclude spring workouts on Saturday.

In his short amount of time in Boone, Chase Brice has noticed how fervent Appalachian State fans can be. But he’s gone fairly unrecognized, th…

A Q&A with two of the 13 returning Appalachian State football seniors.

App State quarterback Kam Bryant set a school record for completion percentage in a season in 2013.

Kam Bryant of Appalachian State took over as starting quarterback against The Citadel.