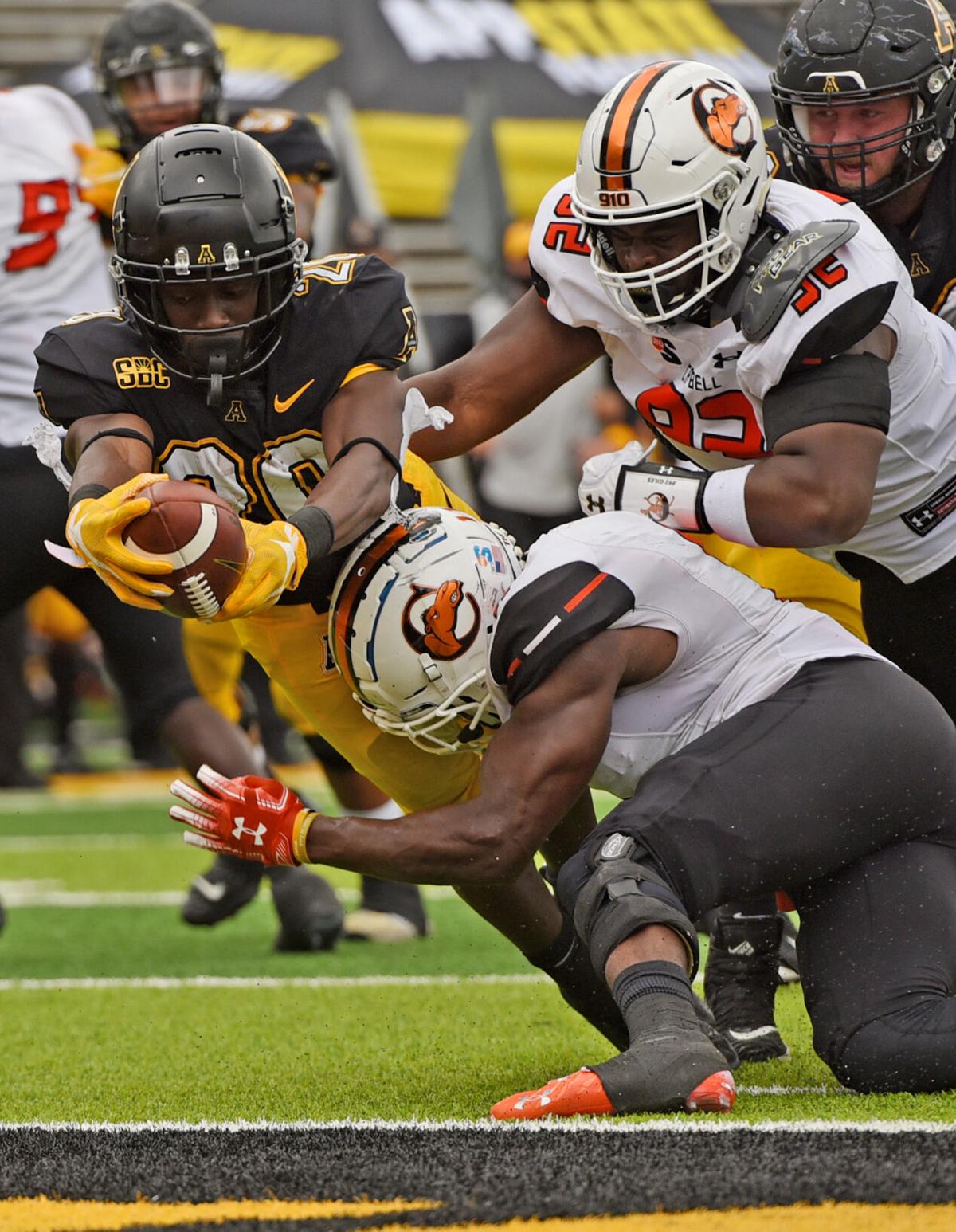 Appalachian State running back Nate Noel, a true freshman, was forced to serve as the primary backup on Saturday. 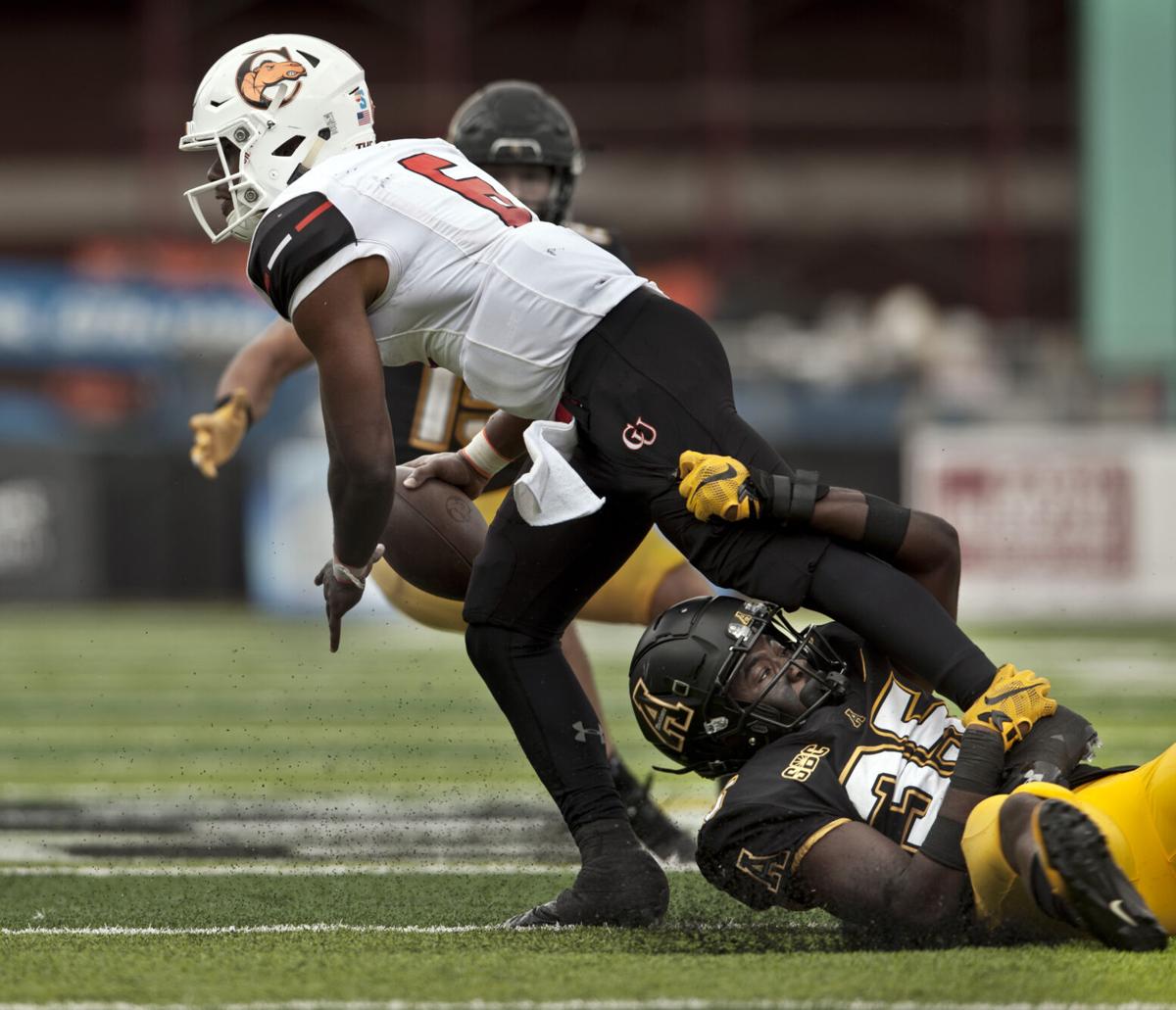 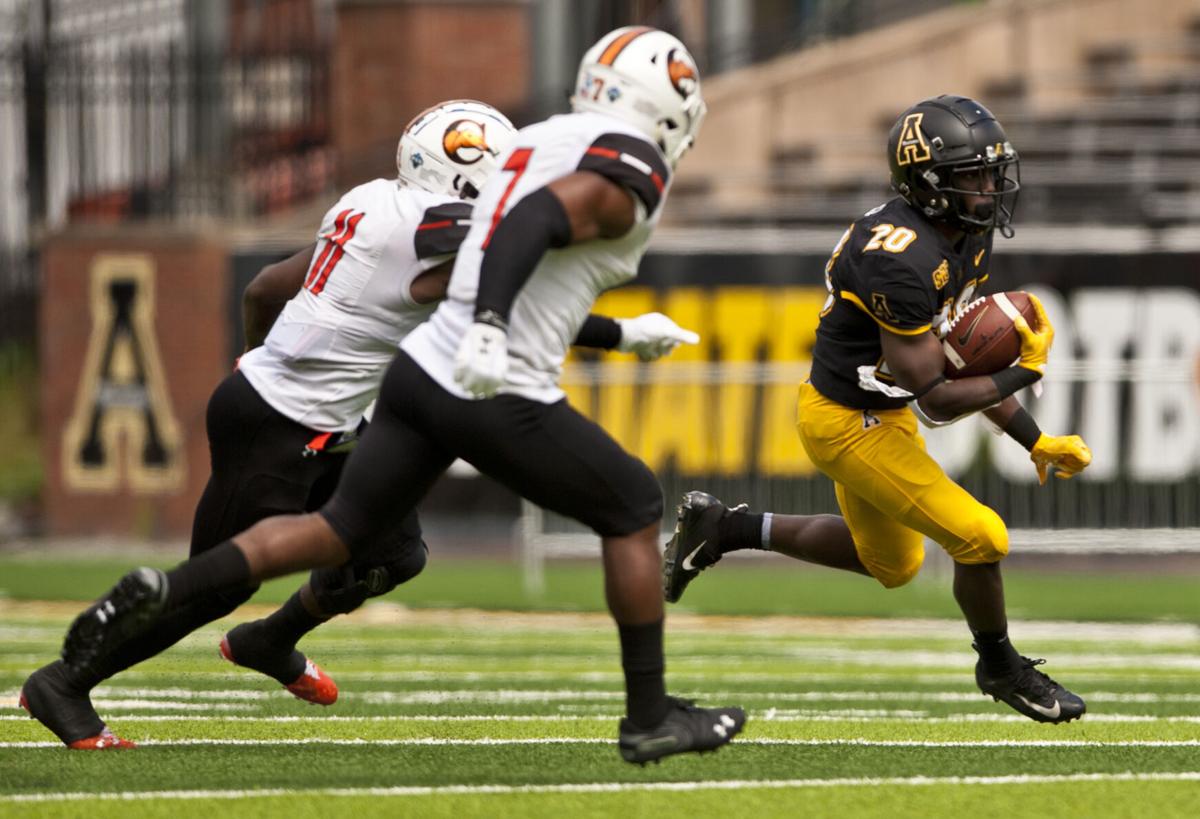 Appalachian State running back Nate Noel gets around Campbell's Ray Miller and Trey Cobb on Saturday.

Playing Campbell, an FCS opponent, increased the likelihood for young Mountaineers to see the field once a lead was established.

But without 20-plus players because of three active COVID-19 cases, one of those knocking 18 players and three assistant coaches out of the 52-21 App State win with contact tracing, it became essential for underclassmen to not only play, but show up in bigger ways.

The game contained a lot of firsts — first starts, first carries, first catches, first tackles — and built excitement for the next men up.

“We know what kind of players they are,” App State coach Shawn Clark said. “That’s why we recruited them.

“With the guys out in quarantine, we were able to get them some playing time or get some practice time this week.”

Noel took his first career carry late in the first quarter. He took his third for 17 yards. By the third quarter, he scored his first App State touchdown as the Mountaineers pushed the game out of reach. The Miami native, who went to the same high school (Northwestern) as defensive lineman Demetrius Taylor, finished with 131 yards on 14 carries.

After the game, Clark made a comparison other coaches have mentioned. He said Noel has the speed and smarts comparable to Darrynton Evans, who left App State as a junior to become a third-round pick in this year’s NFL draft.

“Nate Noel, he’s a dynamite player. Nate can take it the distance,” Clark said. “And the more he plays, the better he’ll be.”

While the offense was hit hardest by contact tracing, the defense turned to a spot starter for its “Dog” outside linebacker position. Jalen McLeod, a true freshman from Laurel, Md., played in relief of the absent Nick Hampton and Tim Frizzell.

McLeod forced a fumble on Campbell’s second drive, a ball recovered by the Camels. It was a play where the ball carrier initially got by McLeod in the backfield, only for the linebacker to chase the runner down and strip the ball lose.

“He was one of those guys we had to talk to constantly and let him know he belongs out there and we know what he’s capable of,” senior safety Kaiden Smith said. “I feel like his physicality and his speed, it showed today for sure.”

All week, as well as on game day, Smith said older players worked to keep the younger ones confident. Quite a few of them took on responsibility on the fly, like McLeod getting his first start and players like Milan Tucker (defensive back to wide receiver) and Anderson Castle (linebacker to running back) making switches over to offense for depth’s sake.

Dashaun Davis, normally Malik Williams' backup at slot receiver, led the Mountaineers with six receptions and sparked some energy on the field.

At one point during game prep, Smith said, fellow senior Shemar Jean-Charles mentioned that this could be a great opportunity for younger teammates. He pointed to how he played behind guys like Clifton Duck, Tae Hayes and others before finally getting his chance to start this year.

It was one of many reminders to the younger guys who shined Saturday why they were brought to Boone in the first place.

“I know we keep those guys up and let them know that they’re here for a reason,” Smith said. “. . . The fact that those guys got that opportunity, we constantly tell them that we trust them and to stay in their playbook and just play the way they play, play the way they got them here.”

Appalachian State running back Nate Noel, a true freshman, was forced to serve as the primary backup on Saturday.

Appalachian State running back Nate Noel gets around Campbell's Ray Miller and Trey Cobb on Saturday.