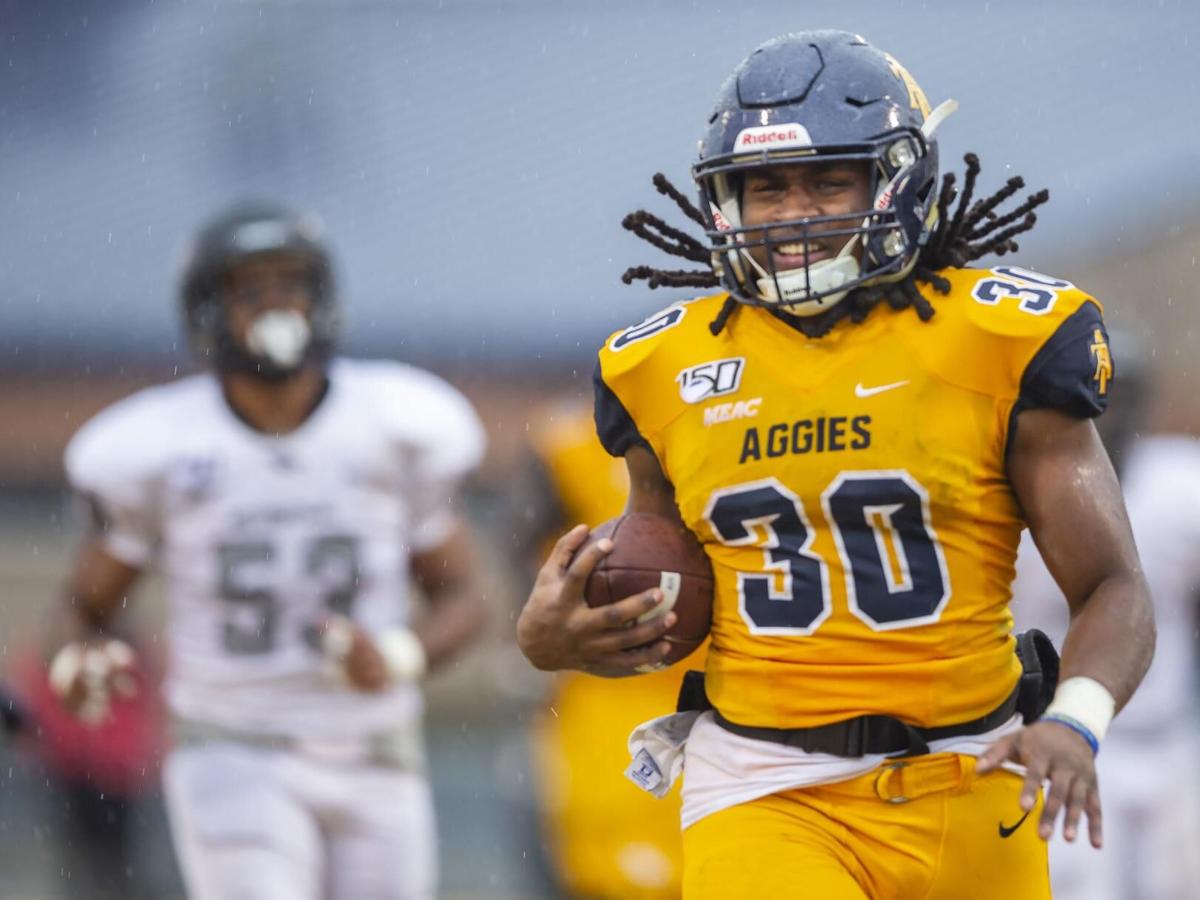 Running back Jah-Maine Martin has rushed for 2,102 yards in his career with the Aggies. 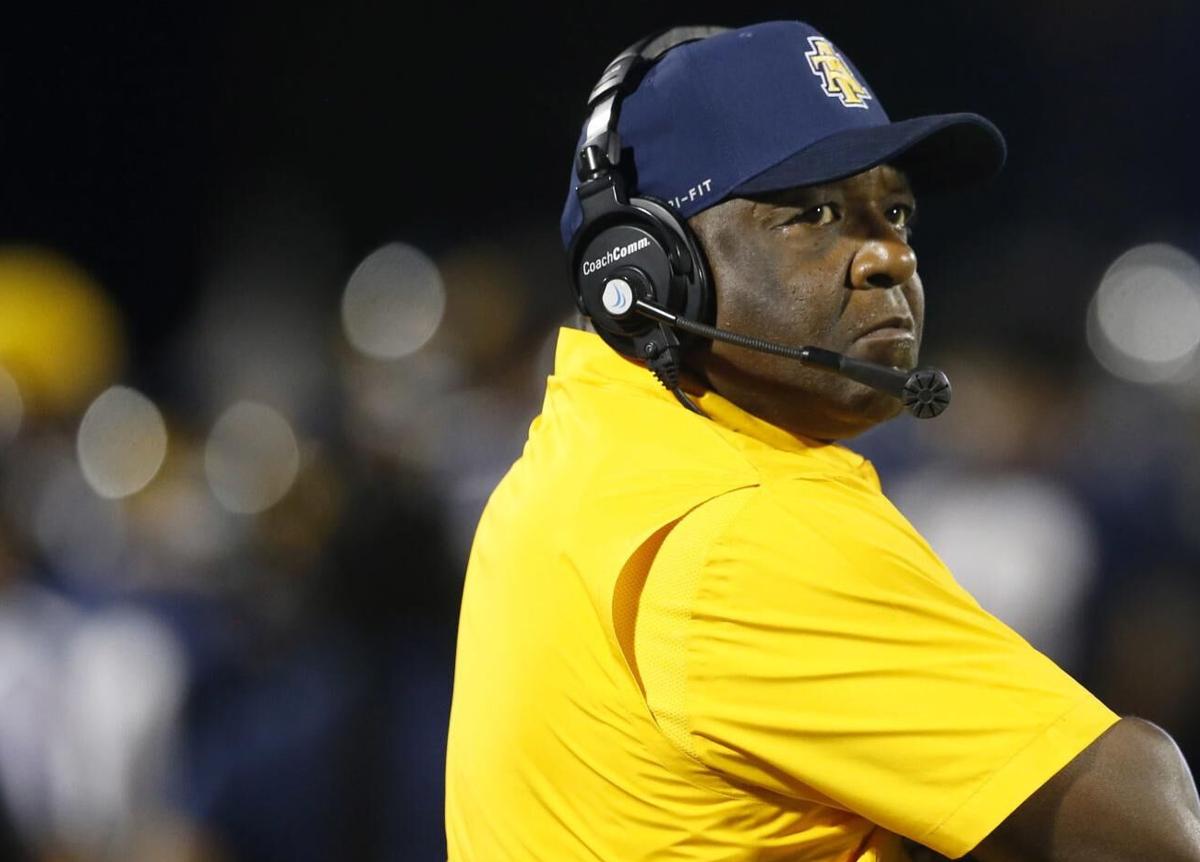 Sam Washington is 19-5 in two seasons as coach of the N.C. A&T Aggies.

The unknowns are plenty as N.C. A&T’s football program heads into its initial season in the Big South Conference.

The Aggies, who won the last four MEAC championships in the conference they left behind, will open practice on Friday afternoon. Coach Sam Washington has had a smooth transition his first two years taking over for the retired Rod Broadway.

The Aggies will have 25 practices before their opener on Sept. 4 at Furman. Because the 2020 season was canceled during the pandemic, A&T has not played since beating Alcorn State 64-44 in the Celebration Bowl on Dec. 21, 2019.

“My concern is the fact that we have not played in two years,” Washington said. “Just the tackling alone is a concern because doing drills with the tackling dummy isn’t the same as a one-on-one, open-field tackle in a game.”

1. Most everything is new

The comfortable feeling of being in the MEAC won’t mean anything in a new conference. There are new schools to play against and plenty of things to learn about the Big South.

As for the Aggies being picked third in the preseason poll, Washington was diplomatic. Monmouth and Kennesaw State, who played in the FCS playoffs in 2019, are listed ahead of them.

“We don’t put a whole lot into it because at this time of the year everybody thinks they can win,” said Washington who is 19-5 in two seasons as head coach, with two Celebration Bowl wins. “We know what we look like on paper, and it’s a matter of going out on the field and playing some games.”

2. Keep an eye on Jah-Maine Martin

The Aggies probably should have had more players predicted to earn All-Big South, but when you are the new kid on the block those things happen.

One player who did make it was Martin, a senior running back who is 12th on the school rushing list with 2,102 yards. In 2019 he led the nation with 7.7 yards a carry and his 23 total touchdowns set a school record.

“We really anticipate him having a very good year,” Washington said. “And based on the work he put in the last six months, or even the last year, has been amazing.”

There aren’t many names on A&T’s schedule that will be recognizable to most of the Aggies’ fan base. In fact, Campbell is the only Big South school the Aggies won’t play in 2021.

The Aggies will play at Duke in a non-conference game, will play rival N.C. Central in Greensboro and will visit MEAC member South Carolina State.

The Aggies will also play Robert Morris in Greensboro in a battle of first-year programs in the Big South.

“Robert Morris is also making its debut in the conference, so we’re looking forward to playing these schools that we haven’t played before,” Washington said.

Besides Robert Morris, the Aggies will play Furman, North Alabama, Kennesaw State and Monmouth for the first time.

Thirteen of 14 Aggies seniors who could have returned will suit up in 2021.

“We’ve been blessed with that,” Washington said. “We are quite pleased with that and we’ll have a lot of guys with experience really at each position.”

Even though the Aggies didn’t play in 2020, Jalen Fowler would have been the starting quarterback. He’ll now get his chance in 2021 after playing in seven games in 2019 (seven games, 18 of 31 passing for 262 yards and three TD passes).

“(Fowler) won it outright, but there is still some more competition,” Washington said. “And hopefully Kingsley Ifedi will push him and either make him better or take over the job.”

No. 14 Coastal Carolina to visit Appalachian State on Wednesday night

Running back Jah-Maine Martin has rushed for 2,102 yards in his career with the Aggies.

Sam Washington is 19-5 in two seasons as coach of the N.C. A&T Aggies.