Defensive end KJ Henry of West Forsyth, who is one of the top high school football players in the country, announced on Wednesday that he will play at Clemson next fall.

K.J. Henry remembers being one of the many coaches’ kids running around what was then called Groves Stadium and having the time of his life.

“We would definitely sometimes get into trouble but nothing serious,” Henry said about his time at Wake Forest when his father, Keith, was an assistant coach on Jim Grobe’s staff from 2001 until 2011. “We moved to Winston (from Athens, Ohio) when I was like 2 years old, and my dad was there at Wake Forest for a long time, and I saw a lot of that stadium and the campus.”

Now Henry, a fifth-year player at fifth-ranked Clemson who has earned undergraduate and master’s degrees, will come back to Winston-Salem one more time. The 6-foot-4, 255-pound defensive end and the Tigers will play the No. 21-ranked Demon Deacons at Truist Field on Saturday.

A few football players at Wake Forest would play tricks on Henry, and he remembers one prank. When he was about 8 or 9, they put him in a clothes hampers in the locker room and spun him around a few times.

“I also remember I was the one that got into trouble,” Henry said with a laugh.

Keith Henry couldn’t remember the specifics about his son getting into trouble but did remember the players messing with him.

“Alphonso (Smith), Aaron Curry, Jon Abbate, James Adams (who is now an assistant at Wake Forest) all messed with K.J. pretty good because he was always around after practice, in the locker room before games and after games,” Keith said. “That was just the way it was and those were some good memories.”

Henry returns to Truist Field a part of one of the most talented defensive lines in the country. Wake Forest coach Dave Clawson said he counts about eight on that line who have all-star ability.

“It starts with the D line,” Clawson said. “A lot of those guys will be playing on Sundays. They are so disruptive and have the ability to get people off schedule…. (Bryan) Bresee is one of the best players in the conference, then there’s Myles Murphy and then there’s K.J. Henry who is out of West Forsyth and is playing his best football ever.”

Growing up in an athletic family that includes his mom, Nikki, had its perks. In his middle school years Henry dreamed of playing in the NBA and loved basketball ahead of football.

He worked as an official to earn extra money in high school during the winter months, and said it kept him close to basketball.

“I can’t remember when it was but I realized at some point that the NBA isn’t looking for 6-foot-4 guys who can’t shoot,” Henry said with a chuckle.

Lots of family and friends

Henry said he expected about 30 or so family and friends helping fill out the Clemson side of the field. And that will include Adrian Snow, his high school coach at West Forsyth and a person Henry said was a big part of his development.

“He’s always a part of our family,” Henry said.

As Keith and Nikki look down from the stands and watch their son play in Winston-Salem one last time there will be plenty of memories.

“We know his career is winding down but it will be special to see him play in Winston-Salem one more time,” Keith Henry said.

Snow, who is still the head coach at West Forsyth, says Henry has always done things the right way in high school and in college.

“He’s just special,” Snow said. “I’ve been blessed to coach a lot of great players, and he’s right there as one of the best.”

When K.J. was being recruited he had a five star by his name and could have gone anywhere. He chose to come to a place that offered everything he was looking for.

“At Clemson you have to fight if you want to play and do what they ask or they will find somebody else,” Snow said. “And K.J. just fought and fought and now he’s reaping those rewards and he’s playing so well right now.”

Henry heads into the game with 10 tackles through three games with a sack and leads the Tigers with six quarterback pressures.

The athletic family includes sisters Kirstie Foster and Maya along with younger brother Isaiah, who is a rising star in high school basketball and plays for the Cannon School in Concord and is drawing interest from Clemson to be the next Henry to go there.

“His brother will eventually be taller than K.J.,” Keith said about Isaiah, who is a 6-foot-3 shooting guard already with a scholarship offer from Appalachian State.

The star of football camps

There wasn’t much doubt that when K.J. was growing up he would attend the Wake Forest camps every summer when his dad was an assistant. And K.J. didn’t disappoint and for three summers in a row won the annual pass, punt and kick competition at those camps.

“He used to love those camps and he’d be the first picked when we would choose up teams to play at the end of each day at camp,” Keith said.

K.J. says the football camps were so competitive, and that’s where he remembers it helping him grow as a player.

“I wanted to win that punt, pass and kick contest every summer,” K.J. said. “Those memories of those camps right there on the practice fields at Wake Forest are so vivid to me.”

For a lot of Wake Forest fans and players from the Jim Grobe Era the ACC championship in 2006 followed by the Orange Bowl the Demon Deacons played in stand out as highlights.

While it’s about the football for most, it wasn’t that way for 9-year-old K.J. He remembers being too hopped up on sugar.

“I was killing the Shirley Temples with the cherry juice and sprite combination and I was on sugar high and I literally couldn’t go to bed,” K.J. said. “But that was a fun time because as a little kid you don’t get to go to places like that too often and I also remember the game room they had at the hotel.”

K.J. says he loves the time he got to spend with his dad when he was coaching at Wake Forest, and without even knowing it that helped shape his future.

“It really did make a difference,” K.J. said.

His next phase in life

After this season K.J. hopes to play in the NFL but he’s not thinking that far ahead. Instead, he wants to continue to help the Tigers win football games this season.

There are a lot more goals in front of him as he plays his final season of college football.

“I’m just trying to grow both on the field and off the field as a leader,” Henry said. “I just want to be here for this team.”

Henry decided to come back for his final season of eligibility to make sure he got every ounce of college life and college football he could get.

“I’m glad I came back because this a close team and we have some goals we want to accomplish,” Henry said. “This has all the makings of a big game, so we have got to show up.”

WATCH NOW: K.J. Henry signed with the Clemson Tigers in December of 2017

Defensive end KJ Henry of West Forsyth, who is one of the top high school football players in the country, announced on Wednesday that he will… 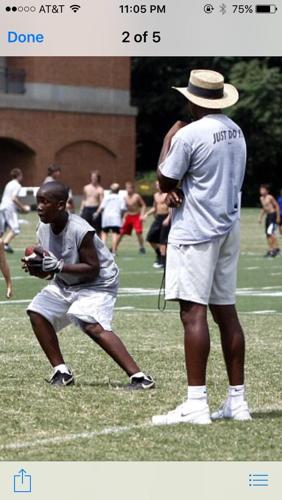 K.J. Henry going through a drill at a Wake Forest summer football camp as a youth. 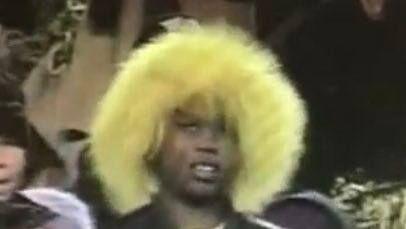 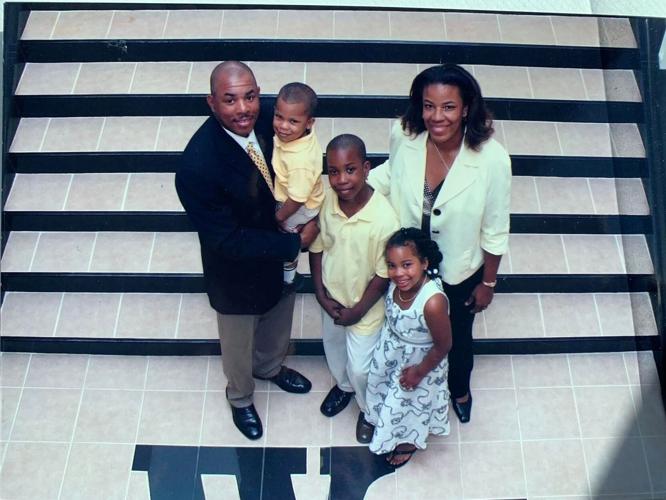 The Henry family poses for a media guide photo at Wake Forest. 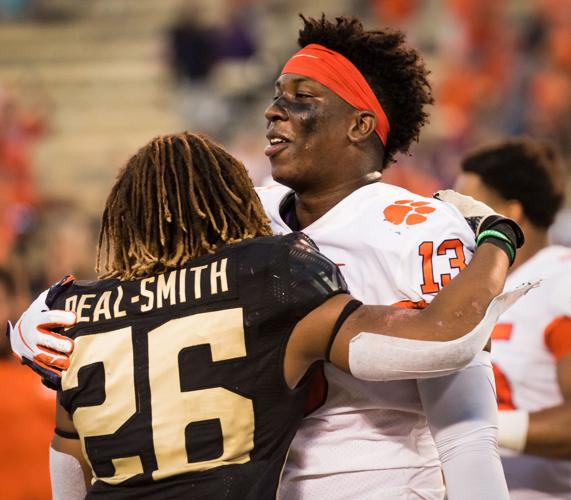 Last season K.J. Henry of Clemson wore No. 13, but this season he's wearing jersey No. 5, which is his favorite. 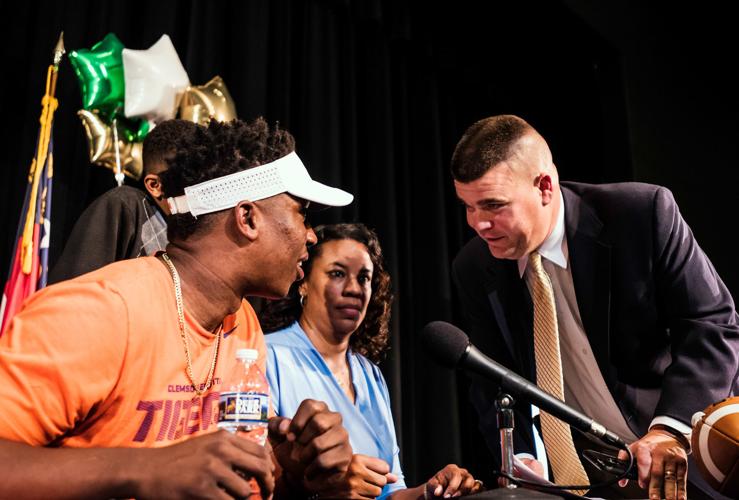 KJ. Henry and his mom, Nikki, along with Coach Adrian Snow of West Forsyth are shown during K.J.'s signing day ceremony in December of 2017. 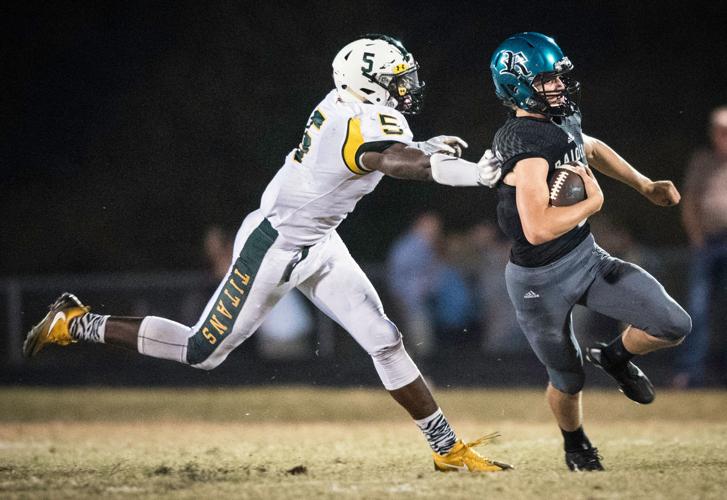 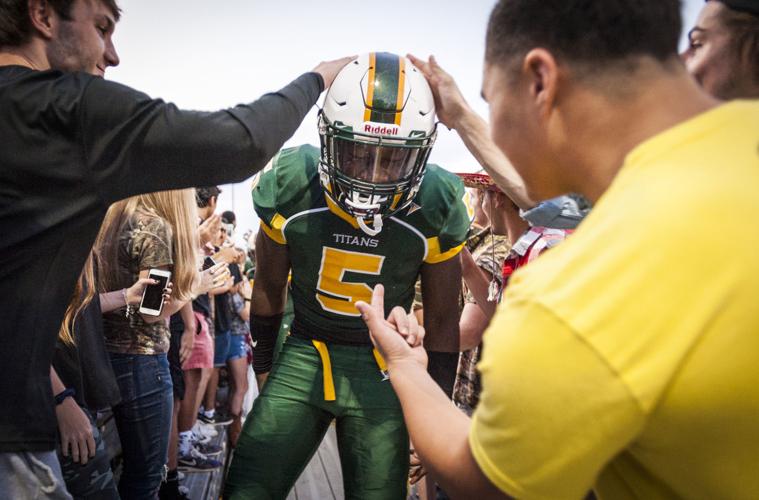 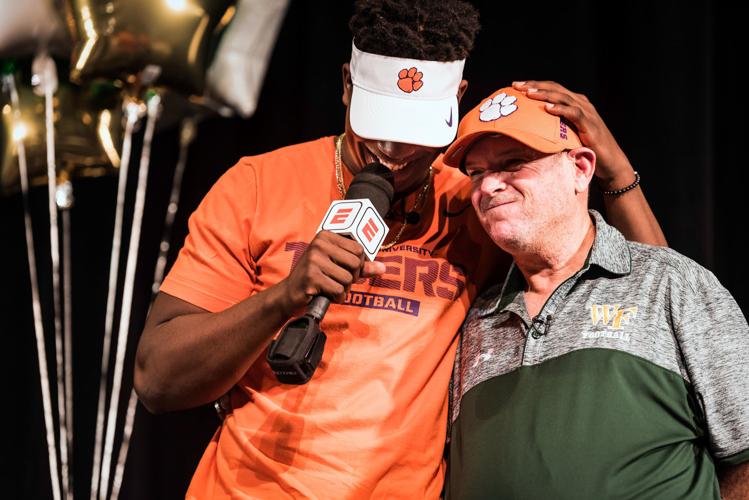 K.J. Henry hugs coach Pat Murphy after having Murphy reveal Henry’s choice to play college football at Clemson on Dec. 20. 2017, to a room full of family and friends at West Forsyth High School.