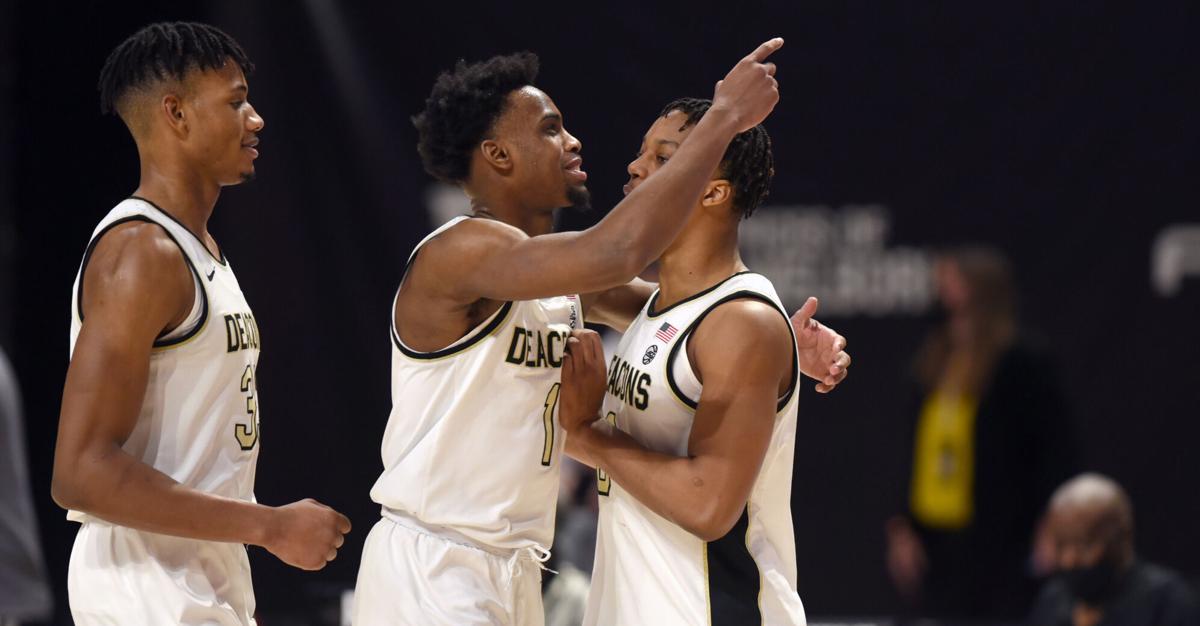 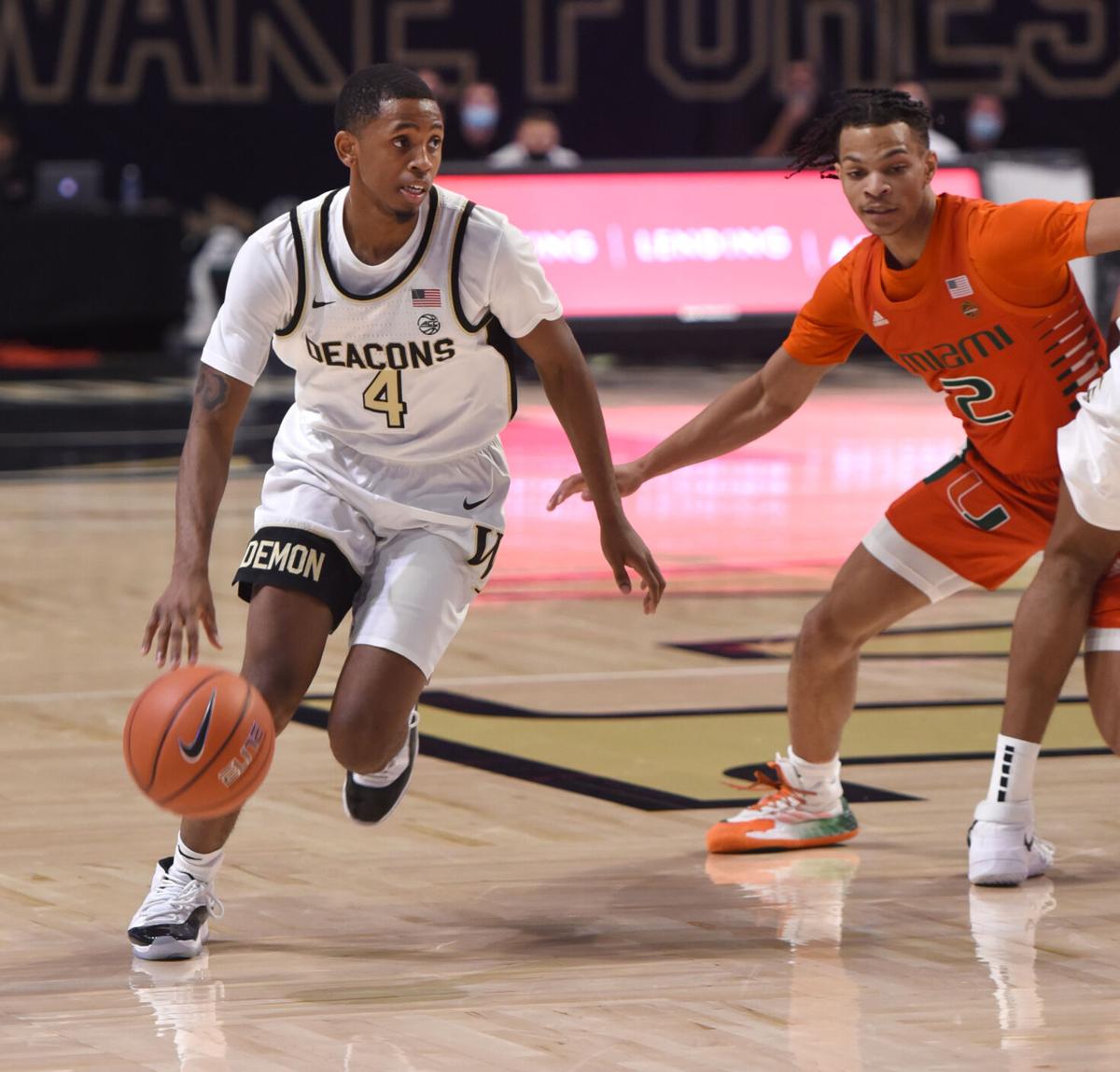 Wake Forest's Daivien Williamson leads the team 13.8 points and 3.2 assists per game while playing 31 minutes or more in the last eight games. 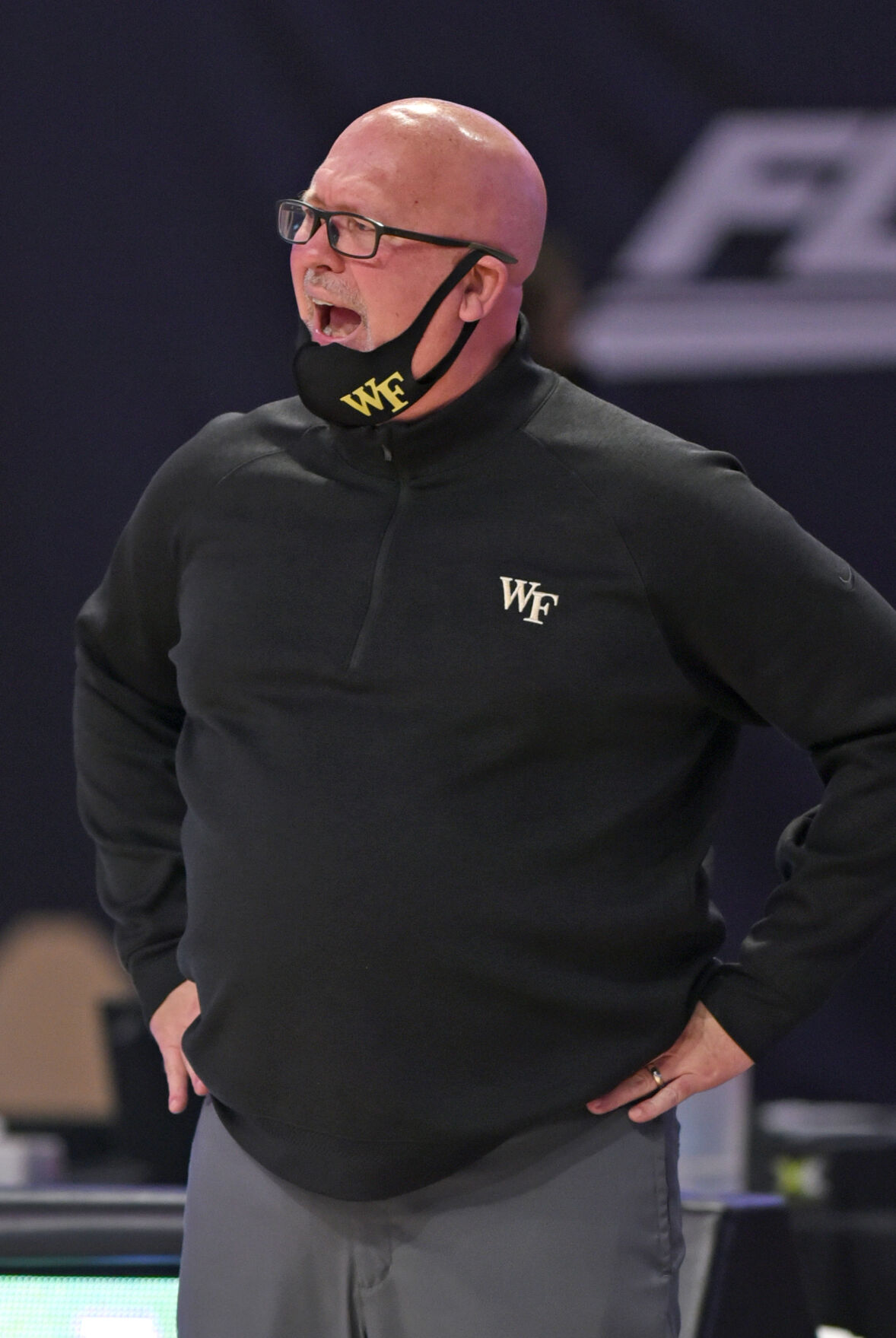 Wake Forest's head coach Steve Forbes makes a point to his team in the Deacons' 66-54 win over Miami in an NCAA basketball game, Saturday, Jan. 30, 2021 at Joel Coliseum.

On Saturday, it was finally time for the Deacons to try to step away from that, removing the late-game drama and the anxiety that comes with it against an undermanned Miami team.

Seven games after their first ACC win of the season, and three days after a reality slap during a sloppy performance, Wake Forest closed out strong. Furthermore, it held a lead that avoided major questioning from the visiting Hurricanes.

“No question, and I thought we got better in one week, right?,” Forbes said. “We saw this last week. A week ago now, Pitt, we got up 10 and we wilted. And we had to survive a last second shot. We didn’t have to do that today. We turned it over once there — they were pressing after misses — but we did a better job of getting to the spots.

“ … But for the most part, I thought we made a lot better basketball plays in the last four minutes of the game.”

Pressure, especially that of the fullcourt variety, had been a shotgun blast against Wake Forest progress during the last week. That pressure caused four turnovers in the final five minutes against the visiting Panthers on Jan. 23, nearly giving away that 76-75 breakthrough victory away. And that same pressure doomed them from the start against N.C. State, a 72-65 loss that featured a season-high 21 turnovers.

Wake Forest turned around to play Miami in a game in which they were favored — KenPom.com projected a win for the Deacons, the only time the site had Wake Forest in the win column for the rest of its season — needing to show it could learn from the flawed play against tight conditions. And even more so that the team could rebound.

“That game was, I mean, everyone saw it,” freshman guard Carter Whitt said. “We just didn’t really have the injury and stuff. So today we really knew we had to just bring energy and be ready to play. Which Wednesday, we really weren’t ready to play. Today, I thought we were.”

Junior forward Isaiah Mucius said the team drilled over and over again in practices since Wednesday, expecting the Hurricanes would bring on the same challenge. But the flow of the game, and the team’s thin roster, made play more favorable.

Miami played just seven players on Saturday, and saw their second-leading scorer in Isaiah Wong exit the second half with a leg injury. The game played fast, bypassing some media timeouts because no plays triggered them, and allowed Wake Forest to lean back on fresher legs.

With 8:59 remaining, Wake Forest’s 10-point halftime lead had shrunk to five. Wong hit back-to-back shots. And then Daivien Williamson, much like he has throughout the season, came up with a play to stabilize. He drained a 3-pointer — one of his three and one of the Deacons’ 13. Forbes said the team called that for the Winston-Salem native, trying to help settle the moment.

They were able to pilot from there to a victory.

“It was great to see from the guys and the whole tea,” Mucius said of being able to maintain a second-half lead. “You know sometimes you’ll get a lead and kind of get complacent, start taking bad shots.

“But they emphasized us just playing together and moving the ball, and staying locked in and together on defense and I think we executed that really well and we didn’t steer any away from our game plan going into the second half.”

Soon after the game, a video popped up from the Wake Forest locker room, focused on Forbes as he addressed the team. One of the first statements he makes in it is a straightforward one: “let’s go win on the road.”

They’ll follow that up with a game at the trending-upward Florida State, the No. 16 team in the nation.

So what do Mucius and Wake Forest take away from a week like this?

“Just build,” Mucius said. “Every single day, build. Every moment. … Just building confidence and building the strength of our team to make sure we have confidence on both ends of the floor.”

Simone Biles reveals if she will return to the Olympics

What is the New York Giants ceiling this season?

What is the New York Giants ceiling this season?

Are the Eagles and Texans close on a deal for Deshaun Watson?

Are the Eagles and Texans close on a deal for Deshaun Watson?

Wake Forest was picked for a fifth-place finish in the Atlantic Division in the ACC Preseason Poll released by the conference on Monday.

The go-to word around Wake Forest football is experience.

Webb Simpson gearing up for homestretch of PGA Tour season, including Wyndham Championship

The former Reagan High School pitcher will fulfill his commitment to Wake Forest after bypassing the Major League Baseball draft.

Wake Forest's Daivien Williamson leads the team 13.8 points and 3.2 assists per game while playing 31 minutes or more in the last eight games.

Wake Forest's head coach Steve Forbes makes a point to his team in the Deacons' 66-54 win over Miami in an NCAA basketball game, Saturday, Jan. 30, 2021 at Joel Coliseum.