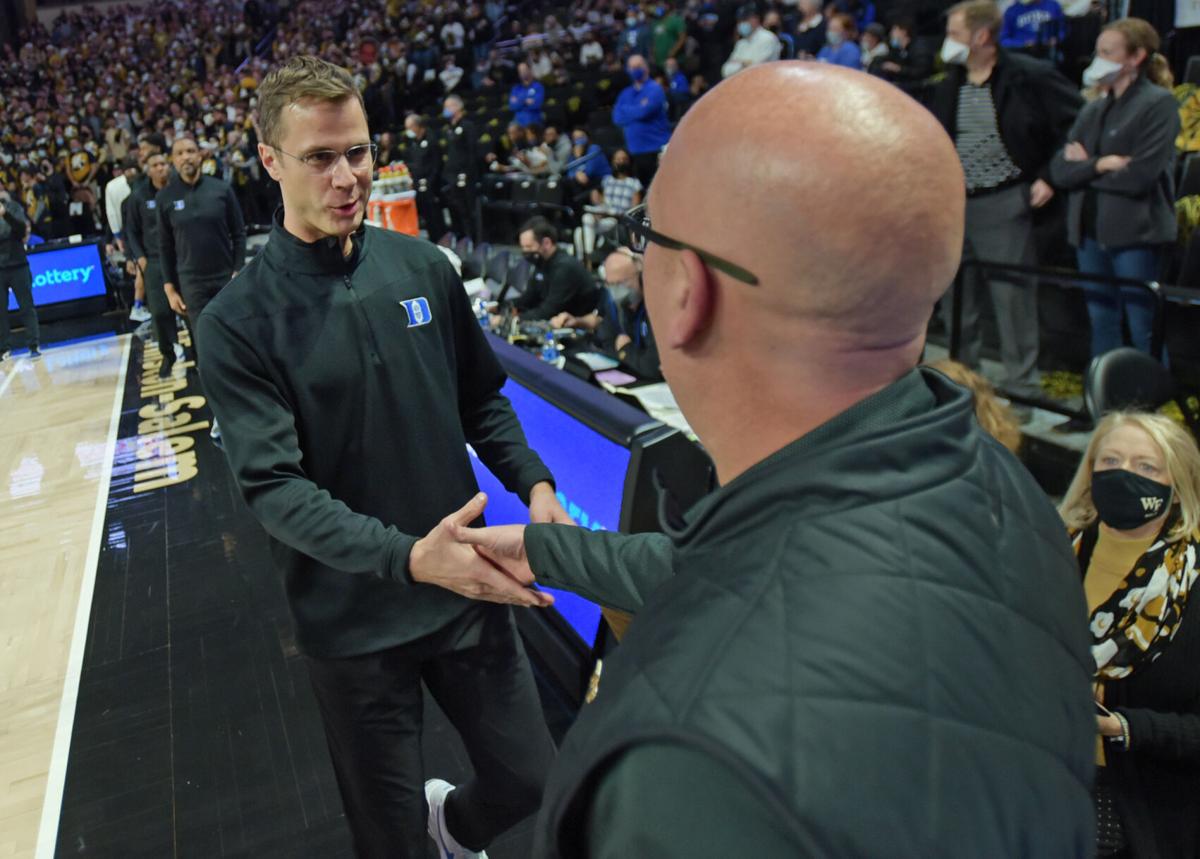 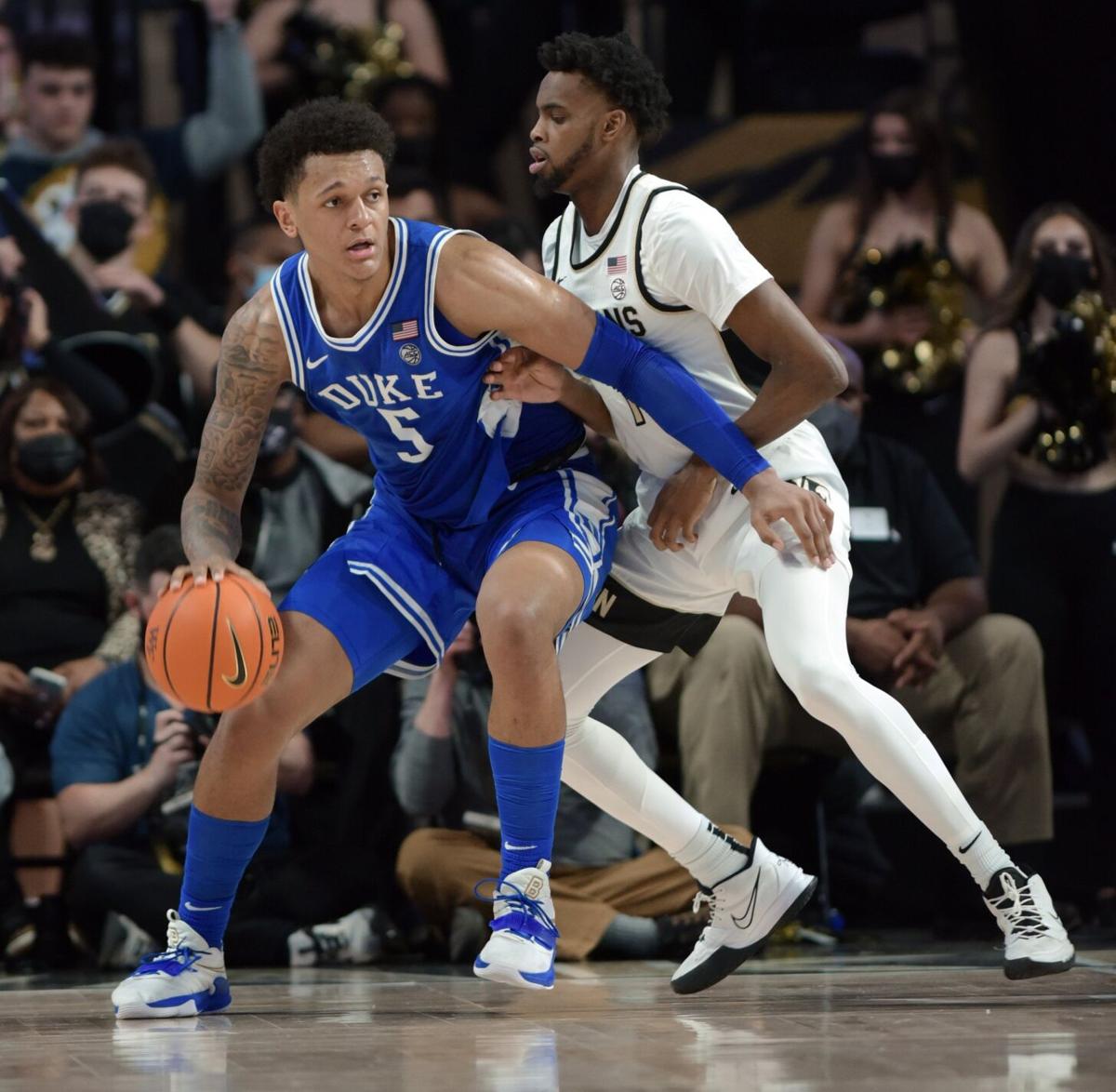 Duke's Paolo Banchero (left) backs toward the basket as Wake Forest's Isaiah Mucius defends in the second half of the Blue Devils' 76-64 win over the Deacons on Wednesday at Joel Coliseum. Banchero scored 24 points.

JEFF MILLS Special to the Journal

WINSTON-SALEM — This was supposed to be Mike Krzyzewski’s last stop at Wake Forest, the final time Duke’s Hall of Fame coach would bring his team to town before retiring at season’s end.

And people turned out to see it like the good Old Gold-and-Black days.

A throwback announced crowd of 14,213 packed into the Lawrence Joel Veterans Memorial Coliseum, which seats 14,665 for basketball. They came to see the rebuilding Demon Deacons (13-4 overall, 3-3 ACC) against the No. 8 Blue Devils (13-2, 3-1), a matchup of energetic second-year coach Steve Forbes against Krzyzewski, in his 42nd and final season.

But Krzyzewski took a sick day, laid up at home with a virus Duke announced was not COVID-19.

So what people saw instead was the Blue Devils’ coach-in-waiting prove he’s ready, at least when it comes to the X’s and O’s.

This isn’t the first time Jon Scheyer has stepped in for his mentor. A year ago, Scheyer coached the Blue Devils in an 83-82 win over Boston College inside an empty Cameron Indoor Stadium, no fans allowed because of the pandemic.

But this time, Scheyer and his team played in a packed house on the road, coming away with an impressive 76-64 victory over arguably the most improved team in the ACC.

“Duke did an unbelievable job of imposing their will on us at the end of the first half and the beginning of the second half,” Forbes said. “They won the game in the middle eight (minutes).”

The Blue Devils imposed Scheyer’s will, and Wake played from behind the rest of the way.

“Coming out in the second half and getting all those defensive stops, we definitely knocked them back,” he said. “That was really important, because from there we were really in control of the game.”

Knocked back. A phrase straight out of the Krzyzewski lexicon.

Two players did a lot of the knocking back. Paolo Banchero scored 24 points, and A.J. Griffin finished with 22 on 8-for-11 shooting, including the biggest shot of the game, a three-pointer with 1onesecond left in the first half.

The game was Griffin’s first in Duke’s starting lineup, and he found out from Scheyer on game day.

“It gave us great size with that group we put out there to begin the game,” Scheyer said. “That’s a big team. Trevor (Keels) and Wendell Moore are your two smallest players, and they’re big guards who can score. And A.J. Griffin has just been coming on. He’s been playing really well. ... It was A.J.’s emergence and the consistency that Mark Williams has had, and then really spotlight Paolo Banchero.”

Scheyer’s big lineup made things difficult for Wake Forest. The Deacs struggled to defend big men Griffin and Banchero. Duke made a point of getting the ball to Banchero in the low post, rather than on the perimeter.

“There was a conscious effort to get him the ball, No. 1, as much as possible, and No. 2, in different spots,” Scheyer said. “The way he started the game off, I really thought he was going to go for 35 points. He’s capable of doing that. What it did, once he was scoring and attacking the basket, it opened things up for other guys. And that’s how we have to play. He’s going to be a big part of what we do. I don’t think I’m giving away nuclear codes or anything by saying we need to get the ball to Paolo.”

On the defensive end, Duke changed the game with its approach to scoring machine Alondes Williams. The Blue Devils didn’t stop him — Wake’s star guard finished with 25 points, seven rebounds and four assists — but they took away the players around him and forced Williams into seven turnovers.

“They were the tougher team when the game was on the line,” Forbes said. “They made the plays they had to make to win the game. They guarded. They did a really good job guarding Alondes. They’re the first team that’s done it (that way).”

Duke’s defense surprised Williams. When he dribbled into the lane, Duke’s perimeter defenders stayed put. Rather than running to play help defense, the Blue Devils took away the pass for open jump shots, allowing shot-blocker Mark Williams to meet Alondes Williams at the rim.

“They didn’t come off the skip pass,” Forbes said. “It was a good philosophy.”

It was a winning philosophy, played out in a packed building that came to see the past but instead caught a glimpse of the future.

“It’s been a heck of a 24 hours,” Scheyer said. “Obviously with the news of Coach not feeling well. We were hoping he was going to be able to make it to the game. But it turned out it was best for him to be at home. …

“Our players were just focused on winning the game. We have a great relationship with our guys. It’s obviously unfortunate that Coach couldn’t be here, but what it does is unite us so we want to get it done for him. We had that going. There’s a complete trust with our guys. There was motivation coming off the Miami (loss). There was motivation to get it done for Coach. And maybe some motivation not wanting to make me look bad. Who knows? But definitely the first two.”

On top of the showdown between the men’s basketball teams from Wake Forest and No. 8 Duke on Wednesday, the visit to Winston-Salem will be the…

Duke's Paolo Banchero (left) backs toward the basket as Wake Forest's Isaiah Mucius defends in the second half of the Blue Devils' 76-64 win over the Deacons on Wednesday at Joel Coliseum. Banchero scored 24 points.