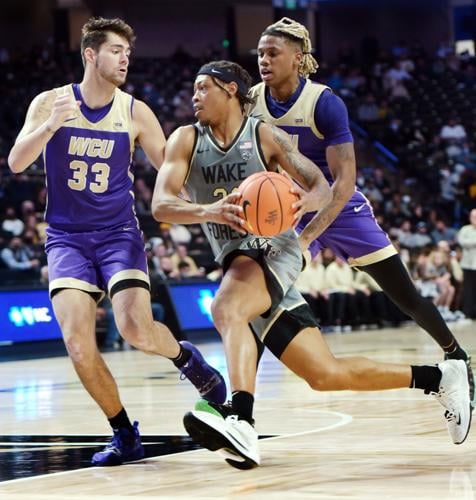 Wake Forest’s Alondes Williams drives for a basket past Western Carolina’s Joe Petrakis and Tyler Harris in the first half of Friday’s game at Joel Coliseum. Williams led the Deacons in scoring, rebounds and assists and played all 40 minutes of the game. 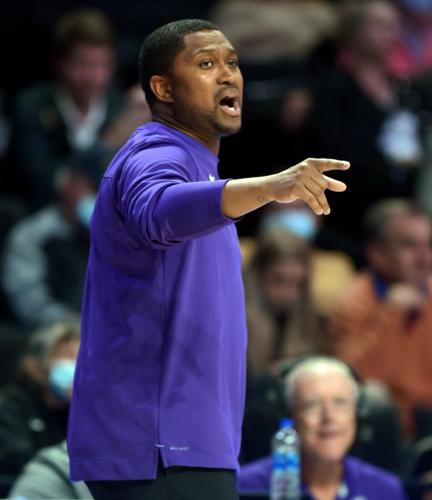 Doug Mead Special to the Journal

As Coach Steve Forbes of Wake Forest glanced down the sideline he saw a familiar opponent — the Western Carolina Catamounts.

As Coach Justin Gray of Western Carolina looked around the Joel Coliseum, he looked right at home.

It was that kind of night for the two opposing coaches. Forbes was the head coach at East Tennessee State for five years, where Western Carolina was one of his team’s main rivals, before taking the Wake Forest job in the spring of 2020.

Gray was a star performer at Wake Forest for four seasons (2002-06) where he was a three-time All-ACC performer and one of the league’s top 3-point shooters.

It turned out to be a disappointing homecoming for Gray, as Wake Forest used a dominating two-man performance and recovered from a sluggish first half to defeat Western Carolina 87-75 at the Joel Coliseum on Friday night.

Why the Deacons won

Aldones Williams scored 32 points and Daivien Williamson added 24 to lead Wake Forest. Williams was 13-of-18 from the field and Williams was 8-of-10. The Deacons’ pressure defense forced the Catamounts into 19 turnovers, 12 of those coming on steals by the Deacons.

Why the Catamounts lost

Western Carolina started off slow in the second half, falling behind 58-45 at the 13-minute mark. The Catamounts trailed only 38-36 at halftime but never recovered from their early second-half struggles.

One of the most versatile players on this season’s Wake team is freshman guard Cameron Hildreth, who is from Worthing, England. The rugged 6-4, 195-pound redhead is deadly from the outside, can battle taller players on the inside and is a good bet to lead the ACC in floor burns this season. Hildreth was the only other player to score in double figures for Wake Forest with 13 points.

Western Carolina spent the entire first half in foul trouble. Wake Forest was in the one-and-one at the 9:07 mark and was in the double bonus with 5:41 on the clock. Wake was 8-of-13 from the foul line in the first half, Western was 2-of-3.

The Catamounts more than held their own on the boards against the bigger, stronger and more physical Deacons. Wake Forest won the rebound battle by 37-33.

Neither team shot it well from long range but more of Western’s offense came from outside the arc. The Deacons were 6-of-18 from long range, the Catamounts 12-of-33.

“Tariq informed me Thursday that he will not be continuing the season with the team,” Coach Steve Forbes said. “”We appreciate his contributions to the program over the past 18 months and wish him well as he continues his career.”

Ingraham, a 6-foot-9 redshirt sophomore, is a native of Philadelphia.

Wake Forest’s Alondes Williams drives for a basket past Western Carolina’s Joe Petrakis and Tyler Harris in the first half of Friday’s game at Joel Coliseum. Williams led the Deacons in scoring, rebounds and assists and played all 40 minutes of the game.