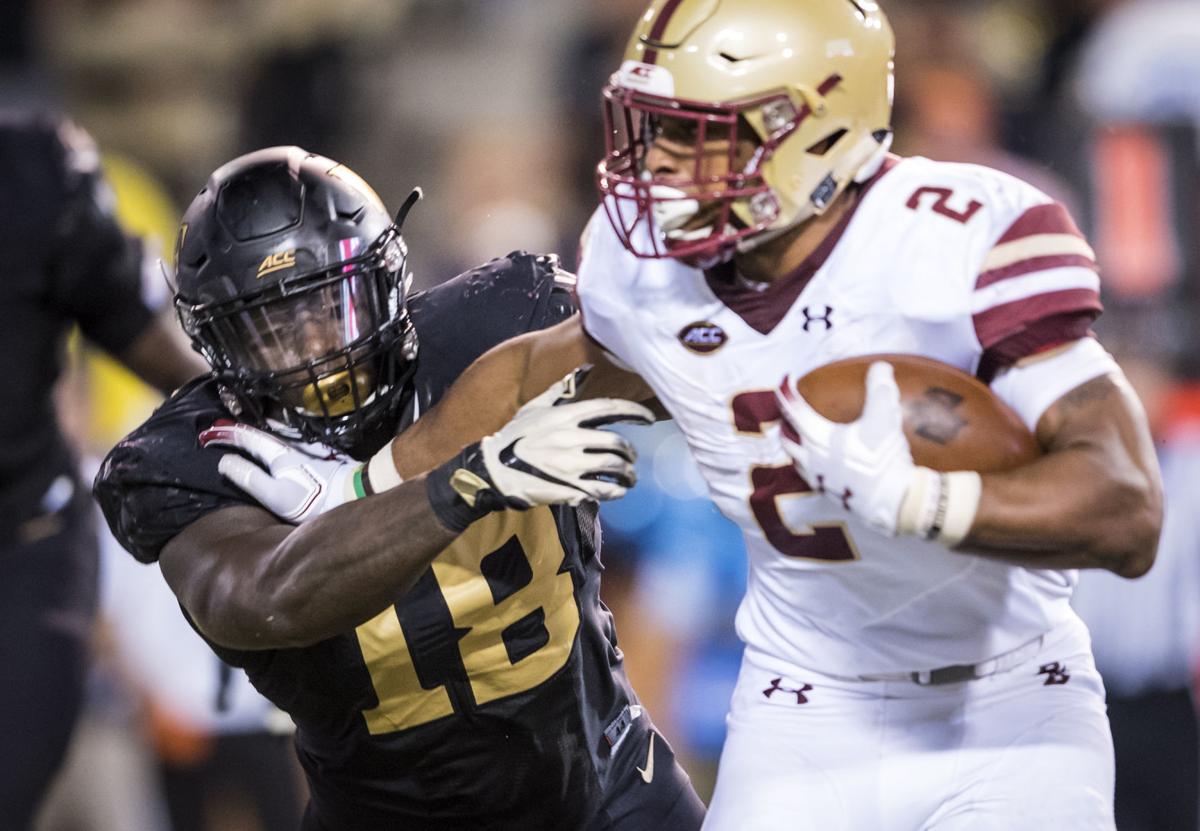 Wake Forest defensive end Boogie Basham (left) went from the youngest starter on the Deacons’ defensive line in 2018 to the most-experienced starter in a matter of months. Basham started in 12 of Wake Forest’s 13 games last season. “I feel like I’ve learned a lot in that whole season,” he says. 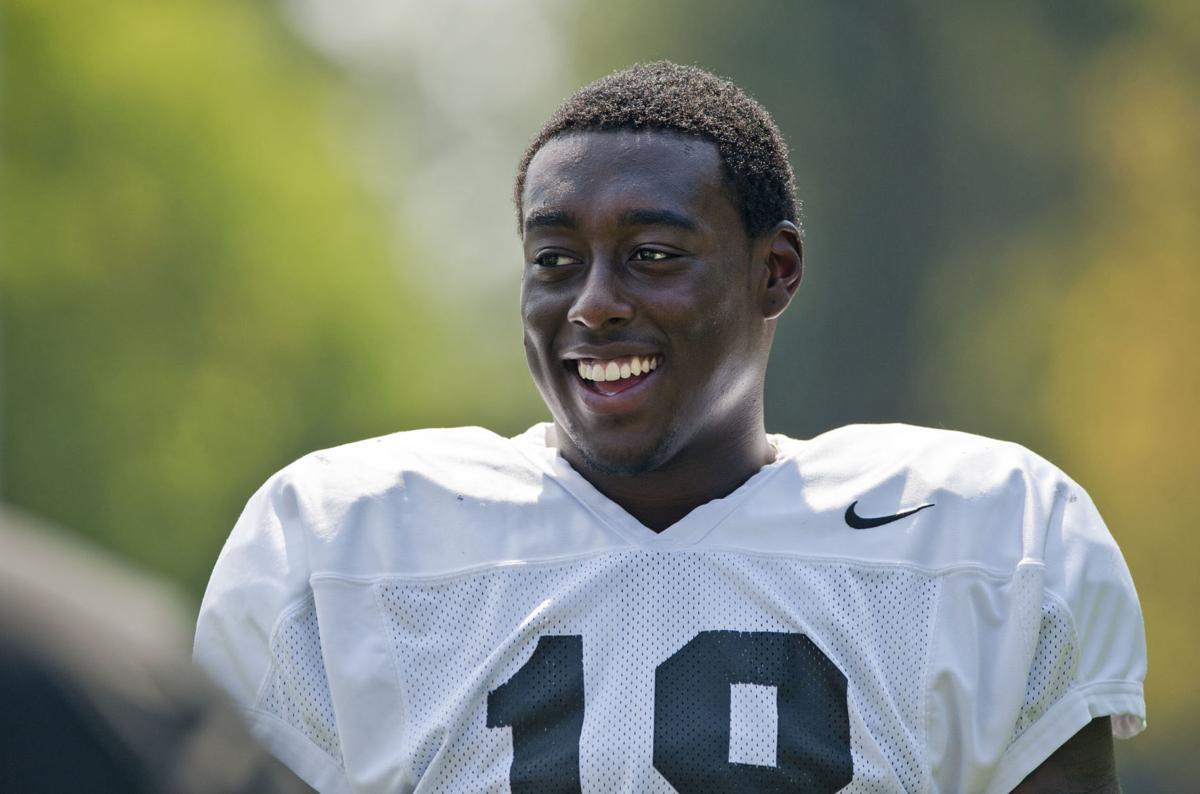 Basham was fourth in tackles for Wake Forest last season with 64. He’ll be a redshirt junior this fall.

In assessing Wake Forest’s first five spring football practices, Boogie Basham’s second sentence is pointing out that there are “a lot of young guys stepping up.”

Though only a year has passed, a lot has happened for Basham since he was one of those young guys stepping up in spring practices.

“I feel like over that year, I don’t feel too much different (as a player) but I feel like I’ve learned a lot in that whole season, and that’ll carry over to the next season,” the rising redshirt junior said Thursday morning. “I feel like I’m getting better each and every day, so I feel like that’s probably the best thing.”

A year ago, Basham was busy establishing himself as the replacement for NFL-bound Duke Ejiofor as the Deacons’ field end — the defensive end position that’s relied on as a pass-rusher. Basham was the only non-senior starter on the defensive line last season, along with defensive tackles Zeek Rodney and Willie Yarbary and defensive end Chris Calhoun.

A couple of weeks ago, when spring practice started without those three on the field, Basham realized the change in his stature.

“I feel like I got in the spring and I looked to the side, I didn’t see Zeek or Willie or Chris, so … even though they’re gone, I feel like three guys will step up in their places and make a big impact,” Basham said.

Basham started 12 of 13 games last season — he missed the Syracuse game with an injury — and was fourth on the team with 64 tackles. The 6-foot-5, 275-pounder was second with 4½ sacks and recovered two fumbles, highlighted by the 23-yard touchdown return against Louisville.

“Having Boogie Basham back is a pretty good place to start,” Coach Dave Clawson said of the Deacons’ defensive line. “I really expect Boogie to get better, and I think he’s starting to become the player that we all thought he was capable of.”

One of the Deacons’ main tasks in the spring and in fall camp is finding those three — or more — players to develop alongside Basham. In doing so, Dave Cohen, the assistant head coach for defense and defensive line coach, will evaluate an inexperienced but talented group.

“We’re not short on talent, though. … I’m not telling you we’re All-ACC players, but we’re not replacing them with … they’re not taking second fiddle to them at all,” Cohen said. “The experience and confidence, yeah, that’ll take them probably half the year.

Williams, Bergan and Kamara are all defensive tackles and will be joined by Miles Fox, a graduate transfer from Old Dominion, when he returns to health in the summer. Manny Walker has been taking first-team reps at the defensive end spot opposite Basham, with Ja’Corey Johns and early enrollee Shamar McCollum showing signs of being able to make an impact next season. Behind Basham, Mike Allen and Royce Francis have had bright spots in spring practices.

Basham seemed to grow more comfortable with being confident while playing last season.

“Of course, my first season starting, I was a little nervous,” Basham said. “But as the season went on, I got a little more comfortable each and every game and with the help of the seniors, Willie and Zeek, they helped along the way. We watched film every day and that contributed a lot to me getting better.”

That aspect serves to highlight the area Cohen seems most concerned with, though.

The leadership void on the defensive line that comes with losing Rodney and Yarbary, plus Elontae Bateman, a would-be fifth-year senior who was medically disqualified before last season, is a big one.

“Confidence and leadership is what my concern is, No. 1,” Cohen said. “Right now, honestly — Boog is an inward person. He’s like Duke (Ejiofor) was. And to be honest with you, I don’t want to take away from his playing ability one iota. That’s not who he is. I hope he becomes more (of a vocal leader), so, we’ll see. It’ll be interesting.”

What bodes well for Basham developing into a leader — without being pressured into it — is that he’s become more focused on improving rather than accruing stats. The Roanoke, Va., native shrugged off a question about whether he would have a number in mind for his sack total next season, as did Cohen.

“The thing he’s doing a better job of is focusing on the process. And he never did that before because he’d worry about (stats),” Cohen said. “He’s much more coachable with details than he’s ever been. … Duke was the best at technician stuff. Boogie has no technician.

“And finally I went and I talked to different NFL scouts and I shared with him what they were saying. I think it hit him: You’re not productive, not because you’re not good enough but because you have no plan.”

Now Basham is formulating his plan — and it’s allowing Wake Forest to formulate a plan for the defensive line.

The Demon Deacons will begin competing for an NCAA championship in May.

Wake Forest defensive end Boogie Basham (left) went from the youngest starter on the Deacons’ defensive line in 2018 to the most-experienced starter in a matter of months. Basham started in 12 of Wake Forest’s 13 games last season. “I feel like I’ve learned a lot in that whole season,” he says.

Basham was fourth in tackles for Wake Forest last season with 64. He’ll be a redshirt junior this fall.