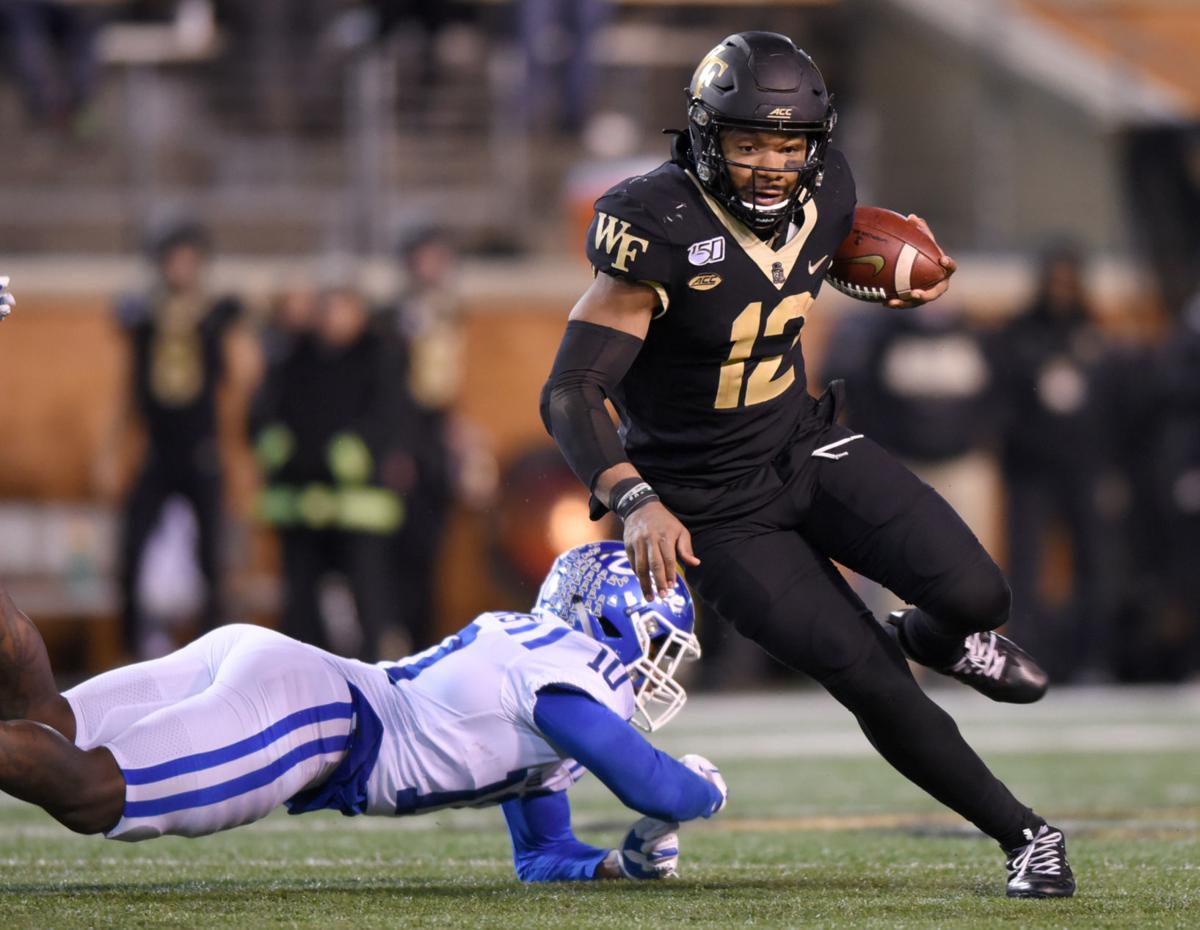 Wake Forest quarterback Jamie Newman runs around Duke’s Marquis Waters in the third quarter of the Deacons’ 39-27 win over Duke on Saturday. 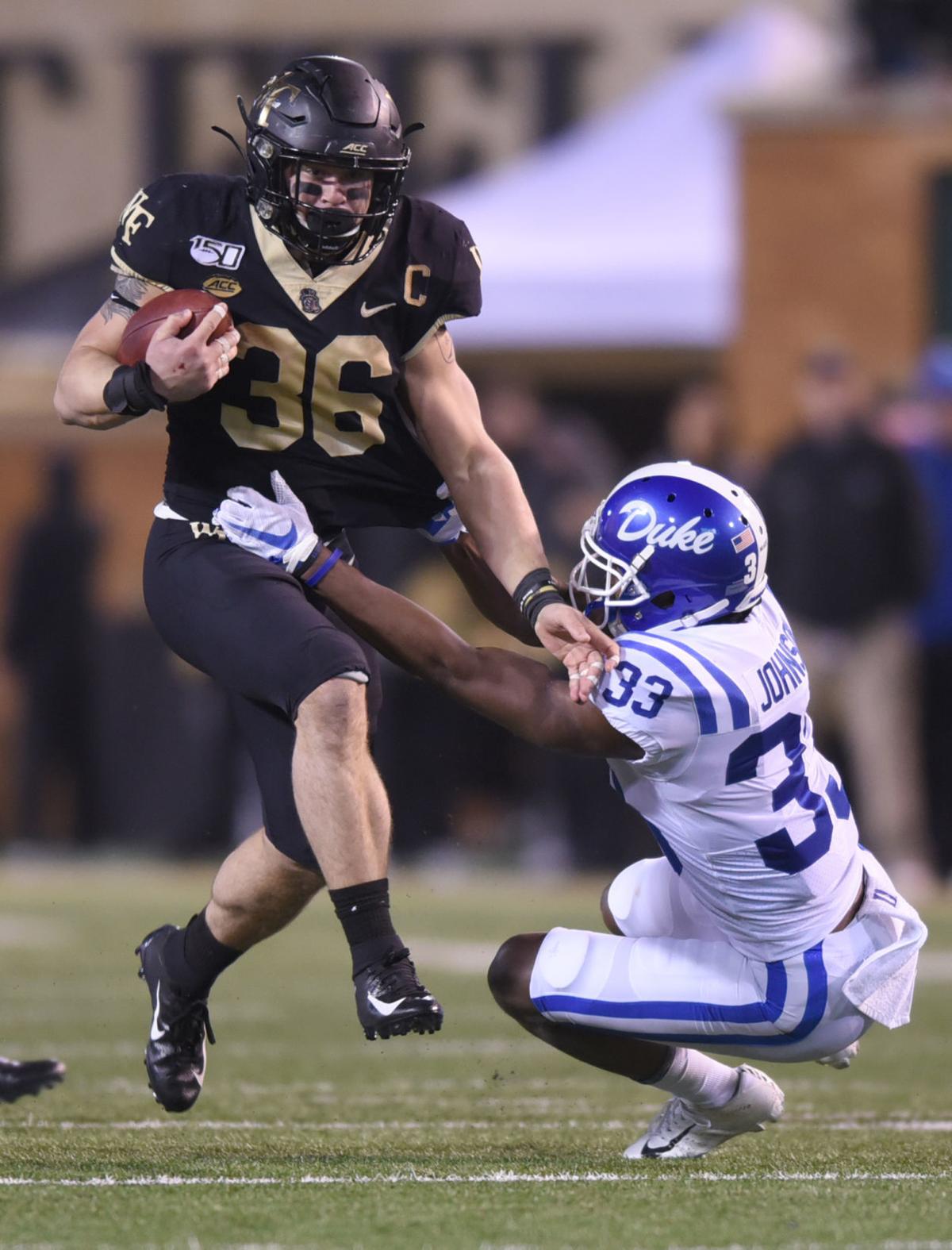 Herron started his 49th career game at left tackle on Saturday night — a new program record for offensive linemen — and as long as he starts Wake Forest’s final two games, he’ll leave with the program record for starts regardless of position.

Herron, a sixth-year player who’s been at Wake Forest for every season of Coach Dave Clawson’s tenure, has experienced a wide spectrum of success and failure. And so Herron remembers that in the 2015 season, the second of the back-to-back 3-9 journeys, opposing defensive starters didn’t want to leave the field against Wake Forest. That was their time to feast against the Deacons’ young offense.

“I mean, redshirt freshman year, it seems like we couldn’t keep the starters off the field on the other side of the ball. They always wanted to stay on the field,” Herron said.

Oh, how times have changed.

“But now it’s just kind of like we go so fast, it’s hard for teams to get set and get aligned and the majority of time they do it not because they’re tired, but because they can’t get the communication right,” Herron said. “And I’ve noticed that a lot.”

The “it” is a prevalent problem for high-volume offenses such as Wake Forest’s.

Offenses across college football go fast — it’s been a growing trend for about a decade — and for two seasons, the Deacons have gone faster than just about every other team. Clawson often says it’s not going fast that bothers defenses — it’s the threat of going fast. Sprinting to the ball and lining up immediately makes the defense do the same, and sometimes the only way to slow the offense is to resort to something that’s risen along with the high-octane offenses:

“Just the frequency at which it happened the other day, it was a lot. And when those players are back in a play later … but you don’t know what happened,” Clawson said of Wake Forest’s win against Duke. “I want to believe the injuries were real. So I’m not — I don’t want to accuse anybody of anything because I don’t know. And you’re not going to keep playing. The health and welfare of the student-athlete has gotta be paramount.”

Eight times in Saturday’s game, defensive players from Duke appeared to be injured. At least six of those times, the injured player returned to the game without missing more than 10 plays.

The most egregious example of a Blue Devil seemingly taking advantage of football’s quick trigger for injury timeouts came when senior linebacker Koby Quansah, after standing on the outside of a pile following a 2-yard run by Cade Carney, appeared to look at Duke’s sideline and then fell down. After being granted a timeout, he got up before medical staff could reach him and walked off the field.

“Things involving injuries are tough and they have things in the last minute of a game in terms of a 10-second runoff that prevent it then, but we’re a tempo offense and when we get going, that’s when we’re best,” Clawson said. “And the amount of times that it got stopped the other night — the frequency of it was high. I’m going to assume that all of those kids were legitimately hurt and that had to happen.”

Wake Forest is hardly the only offense that deals with being slowed by frequent injuries. Miami’s loss on the same night against Florida International featured a few plays in crucial situations that were postponed by phantom injuries.

“Sometimes we’re going so fast and teams aren’t able to get the communication, they’ll just fall to the ground, give the little 30 seconds to, you know, recoup and get everything straight away,” Herron said. “I’ve definitely noticed that a lot as we turn into this up-tempo offense.”

The dilemma is the trepidation that comes with assessing what’s a legitimate injury and what’s not.

“I think to prevent things like that, maybe they need to look at something saying, ‘Hey, if you go down, you can’t go back in until the next series or the next first down unless you use a timeout to buy them back in,’” Clawson said.

Herron doesn’t think there should be a penalty that comes with an apparent fake injury. Having experienced the full spectrum of Wake Forest’s offensive evolution across six seasons, he’s arrived at the conclusion that it’s just going to happen.

“It’s going to happen. You can always be ticky-tack and like, want a penalty for it. But it’s like, you can’t because you don’t know,” Herron said. “Someone could be really hurt and you don’t really know. I’m just kind of like, ‘They’re tired, they can fall to the ground.’ You never really know, because sometimes I can tell if someone’s hurt or sometimes I can just tell if they’re tired. It shouldn’t be a penalty.”

Wake Forest quarterback Jamie Newman runs around Duke’s Marquis Waters in the third quarter of the Deacons’ 39-27 win over Duke on Saturday.