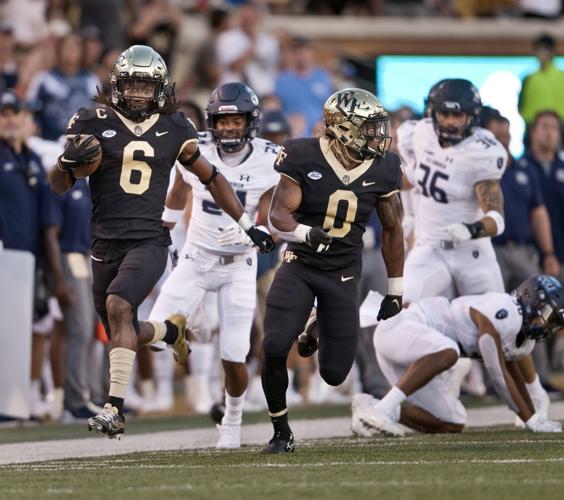 Wake Forest’s Ja’Sir Taylor (6) takes a kickoff return in for a first half touchdown in the Deacons’ season opener against Old Dominion on Fridayat Truist Field. 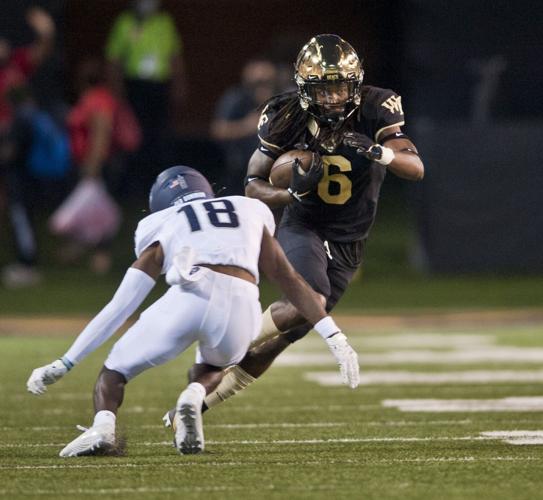 Wake Forest's Ja'Sir Taylor jukes left to get past Old Dominion's Javon Harvey after an interception in the season opener, Friday, Sept. 3, 2021 at Truist Field. 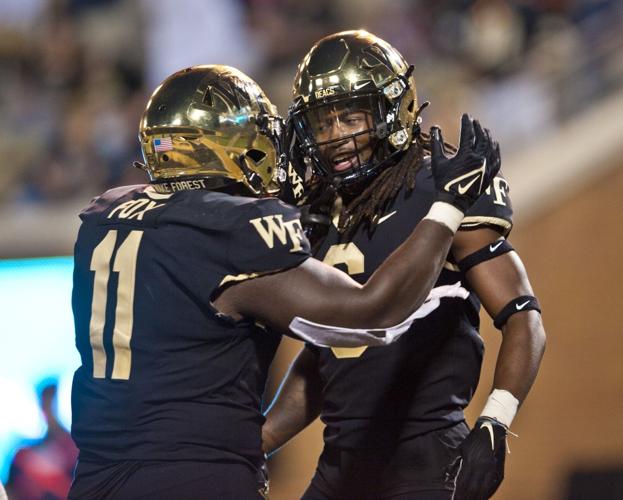 Wake Forest's Miles Fox congratulates Ja'Sir Taylor for an interception and run back against Old Dominion in the season opener, Friday, Sept. 3, 2021 at Truist Field.

Taylor, a safety, grabbed an interception in the Deacons’ 42-10 victory against Old Dominion. But his highlight came from a position that’s still new to him.

The season-ending injury to starting wide receiver Donavon Greene in the preseason also created the kick-returning void eventually filled by Taylor. And he shined in his first moments: Taylor fielded a kickoff at the 1-yard line and sprinted down the field near the end of the first quarter. He broke two tackles, jabbed in a stiff arm and followed his blockers down the right sideline.

Greene, who had a kickoff touchdown return of his own last season against Campbell, just happened to be waiting for him there.

“To make it all special, when I got into the end zone, the first person I saw was Donavon Greene," Taylor said. “ … My heart for him was just to give him a hug and make him feel embraced in love.”

Taylor grabbed Greene, who sat in a chair at the edge of the field with a brace on his right leg. Once he let go, Taylor got swarmed by his other teammates.

He shouldn’t have returned the ball to begin with, Taylor said chuckling. Backed up that deep near the end zone, he said, coaches expect Deacon returners to fair catch.

The safety saw an opportunity and converted on it instead.

As fall camp opened, Wake Forest coach Dave Clawson tried to find the best answer for his kickoff predicament. Watching Taylor return a couple punts, he mentioned to assistant coach Kevin Higgins that Taylor could be a kickoff guy too because of his speed and catching ability.

To top it off, Clawson said, he remembered that some other schools tried to recruit Taylor as an offensive player at Brick Township High School in New Jersey. All the tools were clearly present.

“He's a guy that, like I said, has ball skills, we trust and thought if we had a seam that he could hit it,” Clawson said. “And obviously that happened tonight.”

Taylor said in high school, he got some chances to return kickoffs. And when he arrived at Wake Forest, he tried to float the idea occasionally to coaches. He realized pretty quickly though that he wouldn’t be able to right away. When he attempted to take over the spot in fall camp, he finally felt confident enough to try.

“To be real with myself and him (Clawson), I wasn't ready,” Taylor said. "I wasn't consistent catching it.

“So I would say it took me three to four years to really get calm and collected back there, and really feel those kicks. And just being back there every day, working on my craft. I got my opportunity and I made the most of it.”

Taylor followed up his touchdown return in the next quarter by almost scoring again. He corralled a batted ball at the Wake Forest 46-yard line, flipping the field into the red zone. He mentioned that during the play, in the closing minute before halftime, he was still a bit tired from the earlier return.

Watching Taylor turn an opportunity into a touchdown was a joy for Sam Hartman, the Deacons' starting quarterback. A big special-teams play gets the rest of the team hyped up, he said. But a little more is added when the play comes from a guy like Taylor.

“Those are usually younger guys, in some cases, and then older guys that are like Ja’Sir Taylor, that’s making a sacrifice with his reps to go out and play and be on kickoff return,” Hartman said. “All those are whole-team efforts.

“That's the blocking, that's the schemes, that's the coaches. So it's awesome to see, and then it's another threat for us.”

Wake Forest’s Ja’Sir Taylor (6) takes a kickoff return in for a first half touchdown in the Deacons’ season opener against Old Dominion on Fridayat Truist Field.

Wake Forest's Ja'Sir Taylor jukes left to get past Old Dominion's Javon Harvey after an interception in the season opener, Friday, Sept. 3, 2021 at Truist Field.

Wake Forest's Miles Fox congratulates Ja'Sir Taylor for an interception and run back against Old Dominion in the season opener, Friday, Sept. 3, 2021 at Truist Field.