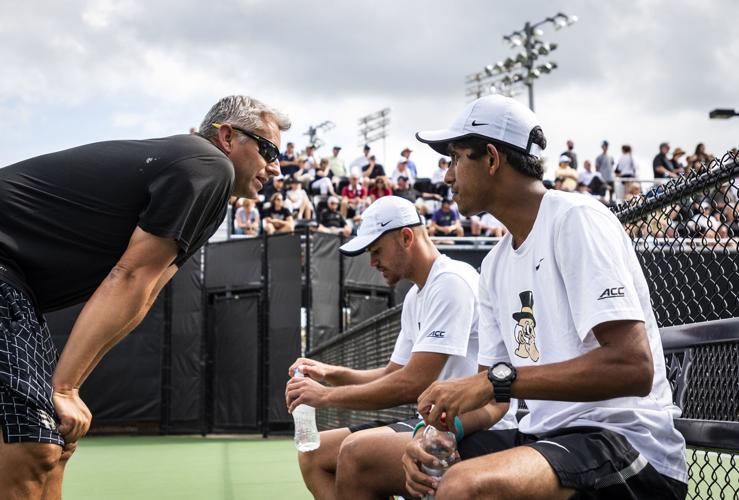 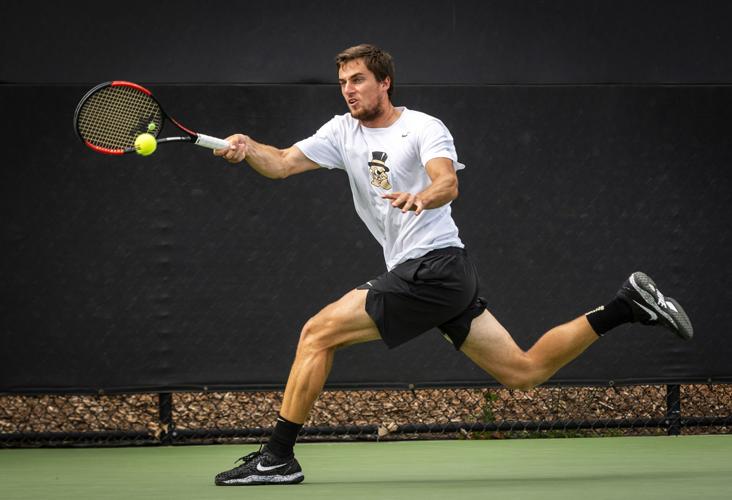 Borna Gojo of Wake Forest reaches for a forehand against Oklahoma’s Spencer Papa at No. 1 singles last week in the NCAA Tournament Super Regional. 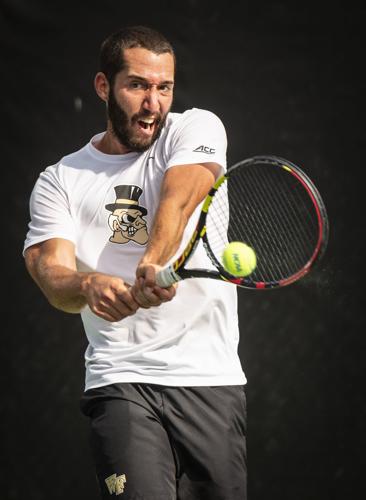 Petros Chrysochos of Wake Forest returns to Oklahoma's Alex Bakshi in No. 2 singles last week in the NCAA Super Regional. 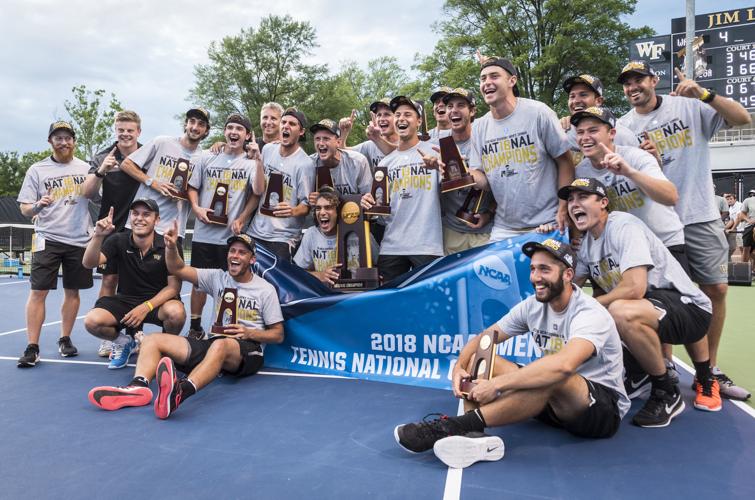 The Deacons (32-3) are the defending national champions after defeating Ohio State 4-2 last year at the Wake Forest Tennis Complex. They will meet fifth-seeded Virginia (24-4) for the fourth time this season. The match is scheduled for noon, and the winner plays the winner of today’s other quarterfinal between No. 9 North Carolina (21-6) and No. 1 Ohio State (32-2), scheduled for 5 p.m., in Saturday’s semifinals.

“We know them, they know us,” Coach Tony Bresky of the Deacons said of the Cavaliers. “I’m sure they’ll be ready. We’ll definitely be ready and we’re looking forward to a good battle.”

Even though both teams play in the ACC and had a regular-season match scheduled for Winston-Salem, the teams met first in a nonconference match on Feb. 8 in Charlottesville, Va., at the Cavaliers’ indoor facility. Virginia won that match 5-2, but Wake Forest evened the season series by winning 6-1 on March 17 in Winston-Salem. Wake Forest also defeated Virginia 4-2 in the ACC Tournament championship on April 21 in Cary.

“I don’t know about for them, but for us it’s the quarterfinals of the NCAAs, so as we always talk about, we don’t really care,” Bresky said. “We weren’t really that worried about where we were going to be seeded. Should we have been seeded higher? Maybe. And if we had approached the year a little differently we probably would’ve.

“But that’s not a concern of ours. We’re focused on us playing our best tennis at the right time and we feel like if we do that, then things are going to happen for us.”

It’s also a mini-homecoming of sorts at the NCAA Tournament. Bresky was an assistant coach at Virginia from 2002-10 with Coach Brian Boland, who built Virginia into a national powerhouse. Bresky left in 2010 to become the head coach at Cornell for one year before becoming the head coach at Wake Forest, where he has a record of 197-60.

And after Bresky left Virginia, Andres Pedroso replaced Bresky as Boland’s assistant. Pedroso, who played at Duke, was the assistant coach at Virginia from 2010-14 before returning as head coach in 2017 after Boland resigned to become the director of player development for the USTA in Orlando.

“Tony built it with Brian here at UVa.,” Pedroso said. “So Tony deserves a lot of credit and he’s really close with those guys — all the guys that played before 2010, which is great to see. You know, it’s just the first half of the UVa. quote-unquote dynasty and I was part of the second half. We have a lot of respect for each other and he’s done a great job at Wake Forest.”

Pedroso is 38-17 in two years with Virginia. In addition, Boland resigned from the USTA last year and became the head coach at Baylor. Boland is also in Orlando this week with the Bears as they prepare for another of today’s four quarterfinals, against Florida.

“It’s great for Andres and being the new head coach at Virginia to see how fast he’s kind of rebuilt that program,” Bresky said. “And obviously having Brian here with Baylor, you know, the three of us, three of the final eight, I think it says kind of a lot about the quality of the coaching. And it’ll be fun to battle with those guys.”

“Right now they’ve got the winning record against us, and we’re looking to tie it,” Pedroso said. “But either way I think I think you have to go out and play the best and you’ve got to embrace the competition. And I think that’s what both programs have done by scheduling a home and away, and it turned out we played in the ACC final and we’re playing in the NCAAs.”

“Deep down we know we haven’t lost a match this year with a full healthy lineup in place,” Bresky said. “So we feel like we’re playing our best tennis at the right time of year.”

Wake Forest ended its regular season with a 34-31 loss to Duke at Wallace Wade Stadium on Saturday night.

Wake Forest enjoyed three luxuries on Wednesday night that South Carolina State would surely give anything to have themselves.

Only two Wake Forest men’s basketball players have recorded a triple-double, and on Saturday, Coach Steve Forbes did what he needed to do to a…

Ever wondered how much money one wins at the FIFA World Cup?

Ever wondered how much money one wins at the FIFA World Cup?

Borna Gojo of Wake Forest reaches for a forehand against Oklahoma’s Spencer Papa at No. 1 singles last week in the NCAA Tournament Super Regional.

Petros Chrysochos of Wake Forest returns to Oklahoma's Alex Bakshi in No. 2 singles last week in the NCAA Super Regional.