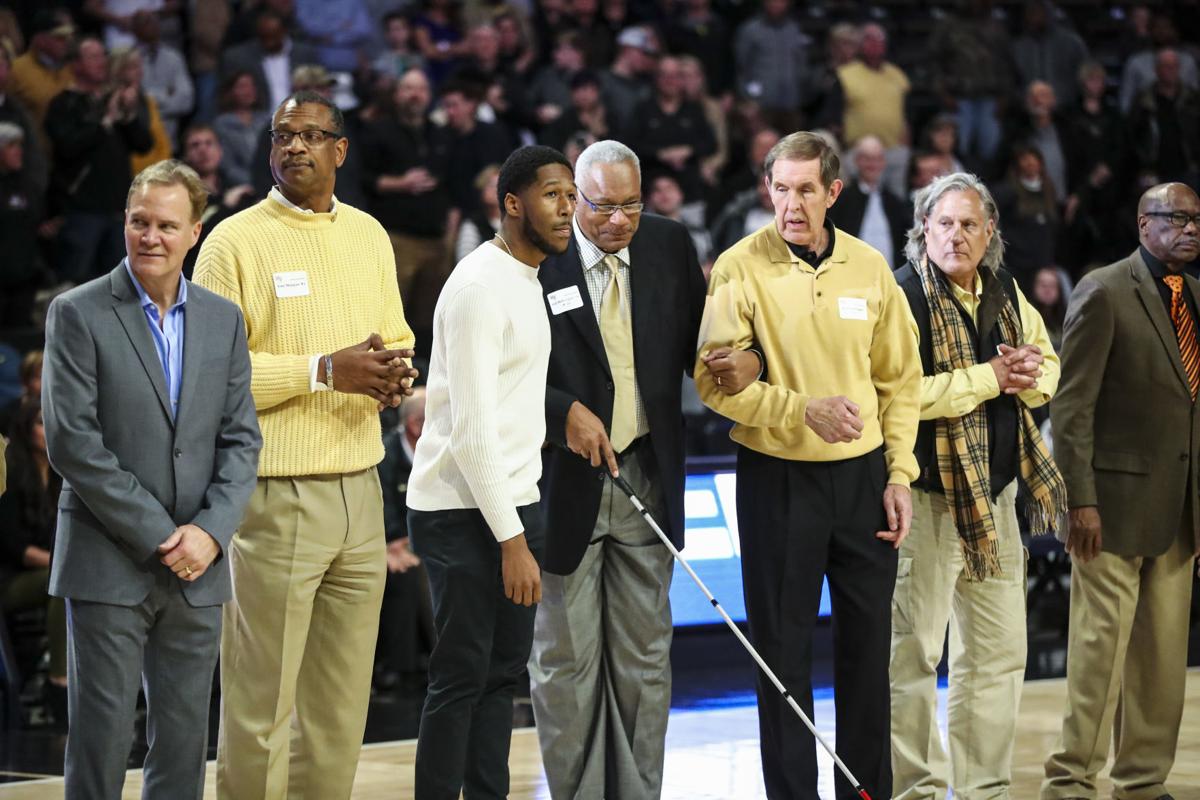 Gil McGregor (with cane) is helped onto the Joel Coliseum floor by his son, Gil Jr. (left) and Rich Habegger, a former Wake Forest teammate. McGregor, who is legally blind, continues to be a motivational speaker. 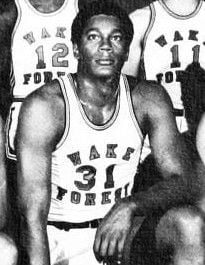 CHARLOTTE — Gil McGregor, who carved out a great career as a color analyst for the Charlotte Hornets on both radio and TV, has been robbed of his sight because of glaucoma. But his mind and his determination are as sharp as ever.

McGregor, 70, is a former Wake Forest basketball star who started losing his eyesight close to the time he retired from his broadcasting career in 2012, when he was with the New Orleans Hornets.

As the CIAA Tournament rolls on in the Queen City for the 15th straight year, McGregor can’t help but think about one of his mentors, the late Big House Gaines. It was Gaines, a former legendary basketball coach and athletics director at Winston-Salem State, who gave McGregor his first announcing job.

“I was on the radio for a season there at Winston-Salem State thanks to Big House,” McGregor said about Gaines, who died in April 2005 and spent 47 seasons on the WSSU bench. “The experience I gained in just one season was pivotal in my development as a broadcaster.”

McGregor, who is from Raeford, was the first black North Carolina native to sign with a Big Four school in basketball. The 6-foot-8 center, a rebounding machine, played at Wake Forest from 1968 through 1971, averaging 10.4 points per game.

He played one season in the NBA after being drafted by the Cincinnati Royals in 1971, then had a stint in the CBA before playing overseas for seven seasons.

After retiring as a player, he was an academic adviser for five years to athletes at Wake Forest.

“I really loved my time there at Wake helping out athletes as they came to see the big picture when it came to life after college,” McGregor said.

McGregor got to know Gaines while a student at Wake Forest. McGregor once tried to answer a question from Gaines about Wake Forest coach Jack McCloskey.

“One day he asked me, ‘Why doesn’t he let you shoot more?’” McGregor said. “Well, that really validated my game as far as I was concerned because this was coming from somebody with such a great basketball mind as Coach Gaines.”

McGregor also started dabbling in TV before going through a tryout with the Hornets, the new NBA team that was founded in 1988 and gave him his big break.

“I can’t say enough about how that time on the Winston-Salem State broadcast helped, and it was all because of Big House,” said McGregor, who teamed with Steve Martin for 24 years calling games for the Hornets in Charlotte and New Orleans. “That one season I was on the radio, I traveled with the team and was there learning from Coach Gaines the whole way. Gil Harris was doing the play-by-play that season for WSSU.”

The way McGregor tells it, the Hornets were looking at Phil Ford, a former North Carolina star, to be their color analyst when the team had to switch gears.

“At about the time they wanted Phil to go to broadcasting school, Dean Smith wanted Phil to be an assistant,” McGregor said, “so Phil went back to Chapel Hill.”

When McGregor went through the tryout with the Hornets, he called an entire game in a studio. He got the job.

McGregor’s son, Gil, also got his own experience because of his father’s career. Gil Jr. was a ball boy for the New Orleans Hornets and got to see Kobe Bryant a few times when the Lakers came to town.

Gil Jr., who was a walk-on at Wake Forest and is also a graduate, writes for NBA.com and penned a tribute after Bryant died in a helicopter crash in January.

“When Gil wrote that, it brought me to tears because I had no idea the influence of my job and what it had on my son, who was young at the time,” McGregor said about his then-14-year-old son who received a gift from Bryant after a game for doing the player a small favor. “But just to know that with me working in the NBA like I did, that it afforded him an opportunity to be a ball boy is something that I’ll never forget.”

McGregor and several former Deacons stars were in Winston-Salem this month as part of the Dave Odom tribute to the 1995 and ’96 ACC championship teams at Wake Forest.

“It was fun to be back at Wake Forest again,” said McGregor, who uses a white cane to walk and was helped onto the Joel Coliseum floor by his son and several former teammates.

The next morning after the tribute, McGregor spoke to the Mount Tabor High School girls and boys basketball players. Among those in the audience were former Wake Forest teammates Willie Griffin and Charlie Davis along with Dr. Gene Hooks, a former Wake Forest athletics director.

Also at the talk were Charles Paul, the father of Chris and C.J. Paul, and Bill Hayes, a former football coach and athletics director at WSSU.

McGregor has been a motivational speaker for several years, first while he was a broadcaster and getting back into it now thanks to a friend who has sponsored engagements across the state.

His message to the players was simple.

“One of my themes in talking with student athletes is about greatness and how you make those around you better than they would have been,” McGregor said. “And that’s not just on the basketball court but in life. One of the things I make sure and talk about is establishing greatness in everything you do, such as your homework, listening to your parents and learning from your teachers.”

McGregor, who also has a podcast and has had guests such as Cleo Hill Jr., the WSSU basketball coach; Sam Jones, the former NBA great who starred at N.C. Central; and Clarence Gaines Jr., says nowadays it’s even more important to talk with the younger generation.

“Good enough is the worst enemy of greatness,” he said. “When you say ‘that’s good enough,’ then that stops you from being great. It’s important to go beyond good enough, and that’s what greatness is.”

McGregor says he’s not about to slow down just because he’s lost his eyesight. He said it started to go gradually near the end of 2012 after he and his wife returned from New Orleans to Charlotte after his broadcasting career ended. He says he can sometimes see shadows but is legally blind.

“It’s at about 99 percent with my loss of sight,” he said. “The way science is these days, they are hoping to reverse it with the nerve endings, and there’s some experimentation in India that is ongoing.”

McGregor isn’t bitter about his lot in life. He’s also not about to quit enjoying life.

“Some people haven’t been able to see their whole lives, but I was able to see for most of my life, so now it’s about making adjustments,” he said. “I’ve always been a positive person — and that won’t change.”

Virginia State (No. 1 North) vs. Claflin

Gil McGregor (with cane) is helped onto the Joel Coliseum floor by his son, Gil Jr. (left) and Rich Habegger, a former Wake Forest teammate. McGregor, who is legally blind, continues to be a motivational speaker.