If fans think that all college football players do is focus on schoolwork, practice and play in games, they’re not familiar with wide receiver Jahmal Banks of Wake Forest.

While all the above is important to Banks, who is having a breakout season for the 13th-ranked Demon Deacons, he’s also about giving back to those less fortunate. That’s why, instead of making time for an interview with a journalist on Wednesday afternoon, he was busy at Paisley Middle School reading to students and getting to know a bunch of eighth graders.

Banks was doing this as part of the popular Skip Prosser Literacy Program that was started in 2009 by Wake Forest and is still going strong.

Sure, he read to the students but he also got to know them and even played a little pickup basketball with a few of them. In other words, Banks was in no hurry to leave.

“Just being there for the kids and getting to know them is great,” Banks said. “Most of them are economically disadvantaged children who come from where I come from. Just helping them learn, and to get to know them, I wanted to make sure they know that they do matter. I just want to be that guide and mentor.”

Banks said getting to know the students at Paisley was a lot of fun.

“We went through a book and we talked about accountability and some of their classes, and even talked a little bit about the NBA season opening up,” Banks said. “Then we went down to the gym and played a little basketball.”

The guidance of his mother

Banks, who grew up with a single mother in the Washington, D.C., area, said they moved around a lot while he was growing up.

Kristie Martin, Banks’ mother, doesn’t mind talking about her son’s exploits athletically, but she’s a big-picture kind of person and is more amazed at how well-rounded he is. While the family battled through homelessness because of a bad marriage, it didn’t define them.

“Jahmal was so strong, and he never let us be apart and we got through it,” Martin said. “That’s what makes his story such a good one. It was God and family, and Jahmal never wavered.”

Martin said her philosophy about her children is simple.

“I’m sort of on the 40-year plan when I look at all my children and what they can do in life,” Martin said. “My oldest daughter played volleyball at Bowie State and got her undergrad degree, and now she has a master’s degree. And Jahmal was always studious, and he’s always been somebody who loves to give back.”

When Banks was deciding on college, Martin said they clashed a bit because she was all about the Ivy League. Banks had chances to play at any of the Ivy League schools because his academics were strong, but he also wanted something more competitive on the field.

“We finally met halfway because at Wake Forest he could get both that education and make an impact on the field, and he’s doing that,” Martin said.

Martin said it wasn’t always easy during the times when they were homeless.

“There’s myself and Jahmal’s older sister (Kyerra Martin) and then there are his two younger sisters, so we just kind of stayed together,” Martin said. “Our faith and our church means a lot to us, and it still does. But we’ve always been a strong family.”

Martin said she’s always told her children about the power of giving back.

“He grew up in the church, and he still gets on the Zoom and talks with the youth in our church at home,” Martin said. “I’ve always taught my children that when they’ve become successful you have to give back; it’s just not an option.”

Kevin Higgins, the assistant head coach and wide receivers’ assistant, has maybe the deepest and most talented group in Coach Dave Clawson’s nine seasons. Higgins doesn’t ever play favorites, but says the way Banks has performed this season has been outstanding.

“It’s just a great story with Jahmal,” Higgins said. “His junior year of high school, he was injured and didn’t get to play a full season. Then he went to a prep school and got injured there and sort of hobbled around, so he’s never had a full year where he’s been healthy. ... So this is really the first time he’s had a 12-month cycle where he’s been healthy and working.”

Heading into the Boston College game on Saturday, Banks has 20 catches for 305 yards with five touchdown catches, averaging 15.3 yards per catch. In his previous two seasons, he had combined for just six catches for 98 yards.

Banks says one of the things he’s worked on this season is being a better practice player, which he says carries over into games.

“Just being able to play my best football day in and day out has been big,” Banks said. “It’s not just in the game, but during practice. I think this allows my teammates and myself to get better.”

The Demon Deacons are loaded with players who are team-first guys, and Banks is one of them. Clawson says Banks’ work on special teams is outstanding and he’s also an underrated blocker.

Off the field, Clawson raves about Banks.

“In every aspect of his life, he’s high achieving,” Clawson said. “He’s got an incredible work ethic. He’s personable, very well-liked by his teammates, and he’s unselfish.”

Getting everything he can out of college

Banks, who is in his third season at Wake Forest but is a sophomore, has a 3.0 grade-point average and is already getting close to earning his undergraduate degree. He’s serious about school and says he might even go for his master’s while still in uniform for the Demon Deacons.

Growing up, Banks played lacrosse, basketball and football, but he also speaks German and Chinese, is a good singer and very good in chess. Banks is a member of the Wake Forest chess club. He’s also been adamant about getting the entire experience at Wake Forest, and has seen a lot more of the campus than just the football facilities.

“He’s very humble,” Higgins said. “And he’s involved with service projects as much as anybody in our program. He does an awful lot and is one of those guys who engages with anybody. He’s a good friend with the dean of the divinity school (Dr. Corey D.B. Walton), and he’s got a really neat disposition about himself.”

Banks says he’s enjoyed everything about his three years at Wake Forest on the field, in the classroom and around campus.

Maybe it’s his background or the guidance he received from his mother, but he’s got a genuine curiosity about everything.

“I just have this love for helping people, and I feel sort of fortunate to be able to build a foundation and coming here to Wake Forest was perfect,” Banks said. “I knew I’d have a great opportunity to help in the community and be a part of the school, even outside of football. I want to represent my peers, my family, my professors, and being in the community keeps that connection.”

Basketball is his second love

Banks chuckles at the notion, but if he was a couple of inches taller, he might be playing in the NBA by now. But in high school he decided that his future was in football; he put away his basketball dreams.

As Higgins and Clawson have said many times, one of the keys to their success is finding athletes who play multiple sports. Banks is a perfect example because he’s one of the best athletes on the team.

“I bet he didn’t tell you he scored 50 points in the championship game,” Martin said.

Banks averaged 20 points a game in high school in basketball as a combo guard.

That intramural team didn’t have a catchy team name, according to Banks but he did offer this: “We definitely dominated.”

Wake Forest ended its regular season with a 34-31 loss to Duke at Wallace Wade Stadium on Saturday night.

Wake Forest enjoyed three luxuries on Wednesday night that South Carolina State would surely give anything to have themselves.

Only two Wake Forest men’s basketball players have recorded a triple-double, and on Saturday, Coach Steve Forbes did what he needed to do to a…

The Wake Forest men’s soccer team, competing in its 12th consecutive NCAA Tournament, had its season come to an end with a 3-0 loss to Ohio St…

Who has scored the most World Cup goals of all time?

Who has scored the most World Cup goals of all time?

Some prep coaches opt to pray, while others punt

Some prep coaches opt to pray, while others punt 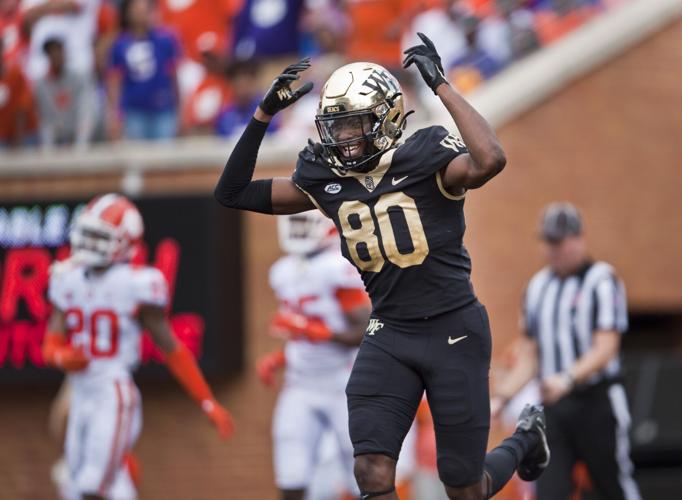 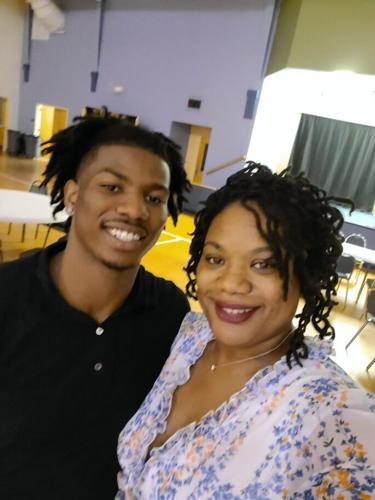 Jahmal Banks says his mother, Kristie Martin, is an inspiration. 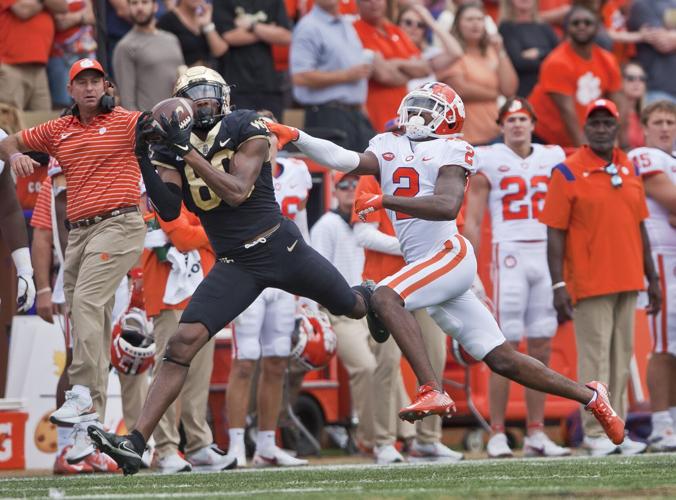 Wake Forest wide receiver Jahmal Banks pulls down a reception along the sideline under pressure from Clemson cornerback Fred Davis earlier this season. 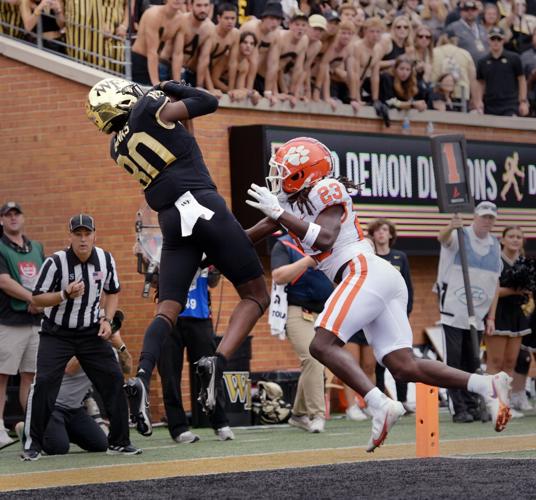 Wake Forest wide receiver Jahmal Banks has five touchdown catches this season including this one in the Clemson game. 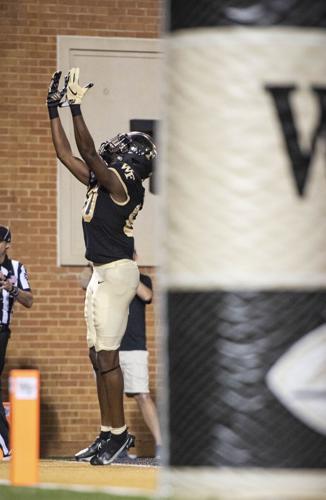 Wake Forest’s Jahmal Banks has helped the Demon Deacons to a 5-1 record so far this season. 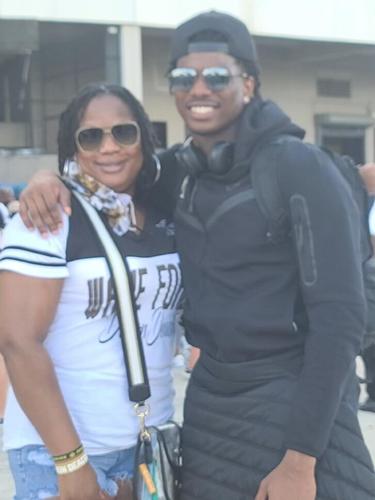 Jahmal Banks and his mother, Kristie Martin, pose after a game last season.