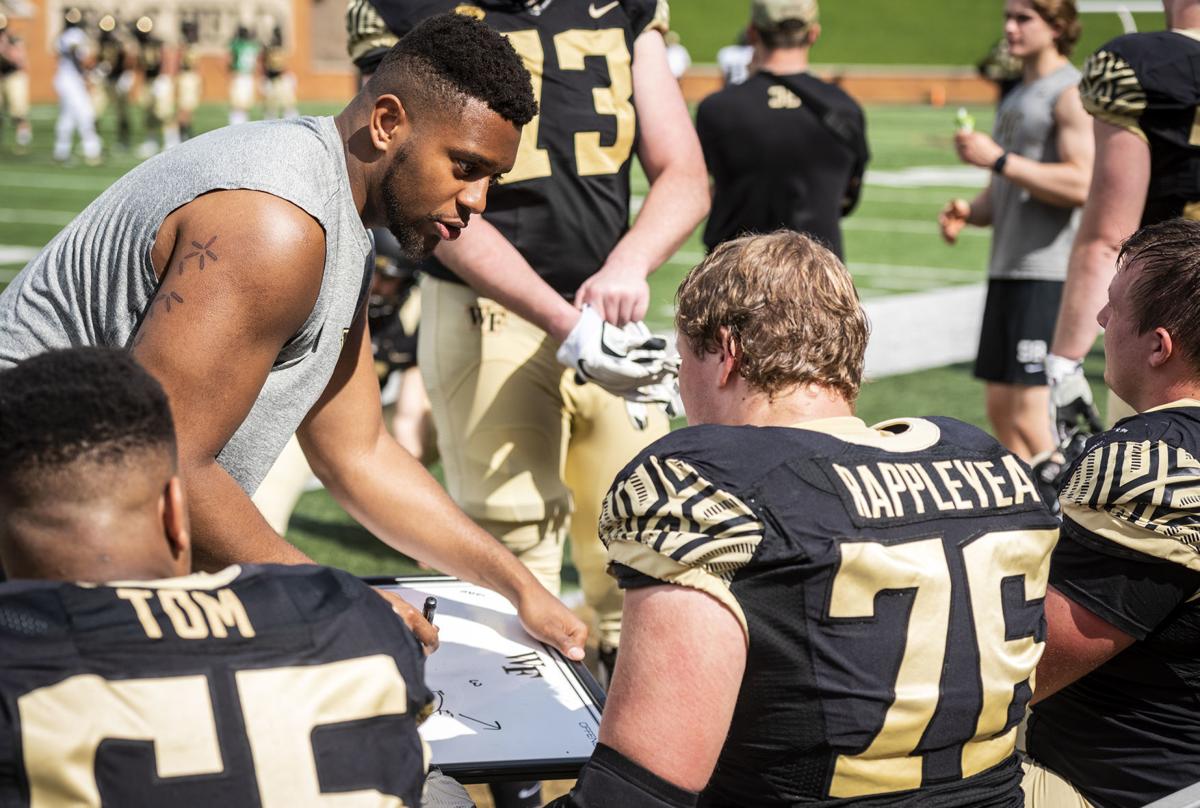 Justin Herron (left) speaks with his teammates during the spring game in April. 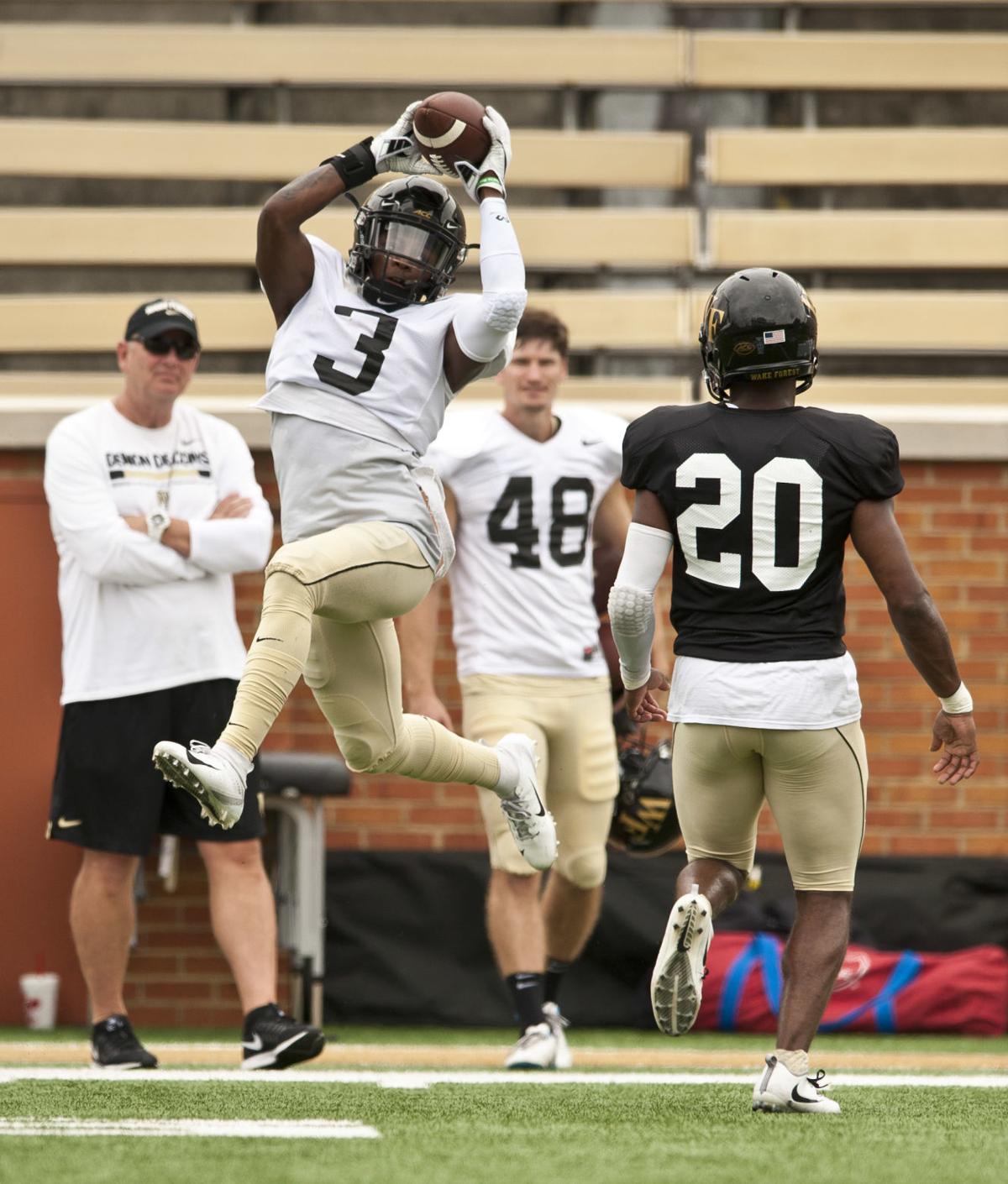 Amid the rash of injuries that Wake Forest’s football team endured last season, torn ACLs to Justin Herron and Coby Davis were two of the most significant. Wake Forest lost its starting left tackle in Herron and a valuable young piece of the secondary in Davis.

They also occurred within an hour of each other in the first game.

Herron was the first to go down on that muggy August night in New Orleans. The Deacons’ fifth-year senior left tackle who started 37 of 38 games in his first three seasons didn’t make it to halftime in the season opener, befallen by a non-contact injury.

About 49 minutes later, Davis went down. With the Deacons in man coverage on third down, Davis’ assignment made a catch on the sideline and the safety was in pursuit. The Tulane player planted to try to stop, so Davis did the same.

Neither Herron nor Davis thought their injuries were serious in the initial moments afterward.

“I walked off the field thinking that everything was going to be OK. It didn’t hurt, I wasn’t in a lot of pain,” Herron said.

“It hurt like hell at first, but I honestly thought I was fine. I told them to put me back in the game,” Davis said. “But they told me I couldn’t go because my knee was loose, they told me I had to go back in the locker room. And then I kinda started to fear that was the expectation.”

Neither player had suffered a serious sports injury before.

Herron missed one game in 2016 for a sprained ankle and a few games in high school after he had his appendix taken out. Davis said the most-significant injury he’d ever had was “an ankle tweak.”

Now both of them — after pushing each other through the rehab process — are ready to put to rest the stories of their 2018 seasons and regain their pre-injury form.

A few days after the severity of the injuries was known, Coach Dave Clawson said of Herron and Davis: “We lost, really, two of our best players for the season.”

About 10 months later, though, Wake Forest stands to regain those players.

The mental side of coming back after missing virtually an entire season differs between Herron and Davis.

For Herron, it’s a matter of returning after watching the players he lined up next to for five years leave. The core of the Beef Boys has moved on — and Herron was there on Senior Day to shake the hands of Phil Haynes, Ryan Anderson and Patrick Osterhage as they left the field.

“Phil Haynes, Ryan Anderson, (defensive tackles) Willie Yarbary, Zeek Rodney and all of those players — it’s hard to see them play and you want to play with them,” Herron said. “And sometimes it just goes to you missing being around the team … and creating those memories that last forever.”

For Davis, it’s a matter of losing ground to other players on the roster. Beyond the trepidation that he won’t have the same quickness or burst, his fear is that he’s been passed in the pecking order of the Deacons’ defensive backfield.

“That’s always scary, too, because you’re missing a whole year of not doing stuff. You don’t want to lose your position, all the stuff you’ve built up for,” Davis said.

When Wake Forest starts fall camp in a few weeks, Herron will reclaim his spot at left tackle. Jake Benzinger moved to that spot last year and will return to right tackle, with Nathan Gilliam sliding back to guard and basically giving the Deacons three returning starters on the offensive line.

It’s not that simple for Davis, who will join a crowded stable of safeties vying for starting spots after the departures of Cameron Glenn and Chuck Wade Jr. The 2017 season saw Davis on the field for 336 snaps, and he emerged late as a viable nickel cornerback as a freshman.

After Davis’ injury, freshman Nasir Greer stepped into a lead role in the secondary and Luke Masterson gained experience at safety, linebacker and rover.

“You also don’t want to lose your idea and everything you learned in terms of the defense … It’s just how much you lose,” Davis said.

Herron has been fully cleared to participate in off-season workouts for about a month. He said he’s done everything required in the rehab process other than doing things with pads on, and that time will come when Wake Forest opens fall camp.

Davis said he’s 95% cleared and he expects to be fully cleared in the next few days.

Along the way, the two Maryland natives — Herron is from Silver Spring, Davis is from Upper Marlboro — waged a friendly competition to see which of them could complete tasks first.

“It was good because it created a sense of competition, it kept that competition, kept that drive going while we were — you know, if we were by ourselves, it’s kind of hard to compete against yourself every day,” Herron said.

“Man, Justin is a great guy. He works so hard and he’s a great leader, so just to be — and we’re both from the same area, so we had a close bond, too, in that way,” Davis said. “But he was pushing me, we were both competing to be the first one to come back or do something, reach those … checkpoints.”

Now, the natural question here is that if Herron has been fully cleared and Davis hasn’t, does that make Herron the winner of their friendly competition?

“Naw, I ain’t going to tell you he won because that’s just not in my — I’m a competitor too,” Davis said, his voice sharpening toward the end of the sentence. “There were some things I beat him in, some things he beat me in. Some things we had setbacks on, too.

“I would beat him in something, but then my knee would start hurting and I went back to doing something else.”

There’s also the obvious part of this: As long as both are on the field for the Deacons, it doesn’t matter which one got there first.

It matters that they stay there.

The Demon Deacons drop to 0-5 in ACC play.

Justin Herron (left) speaks with his teammates during the spring game in April.