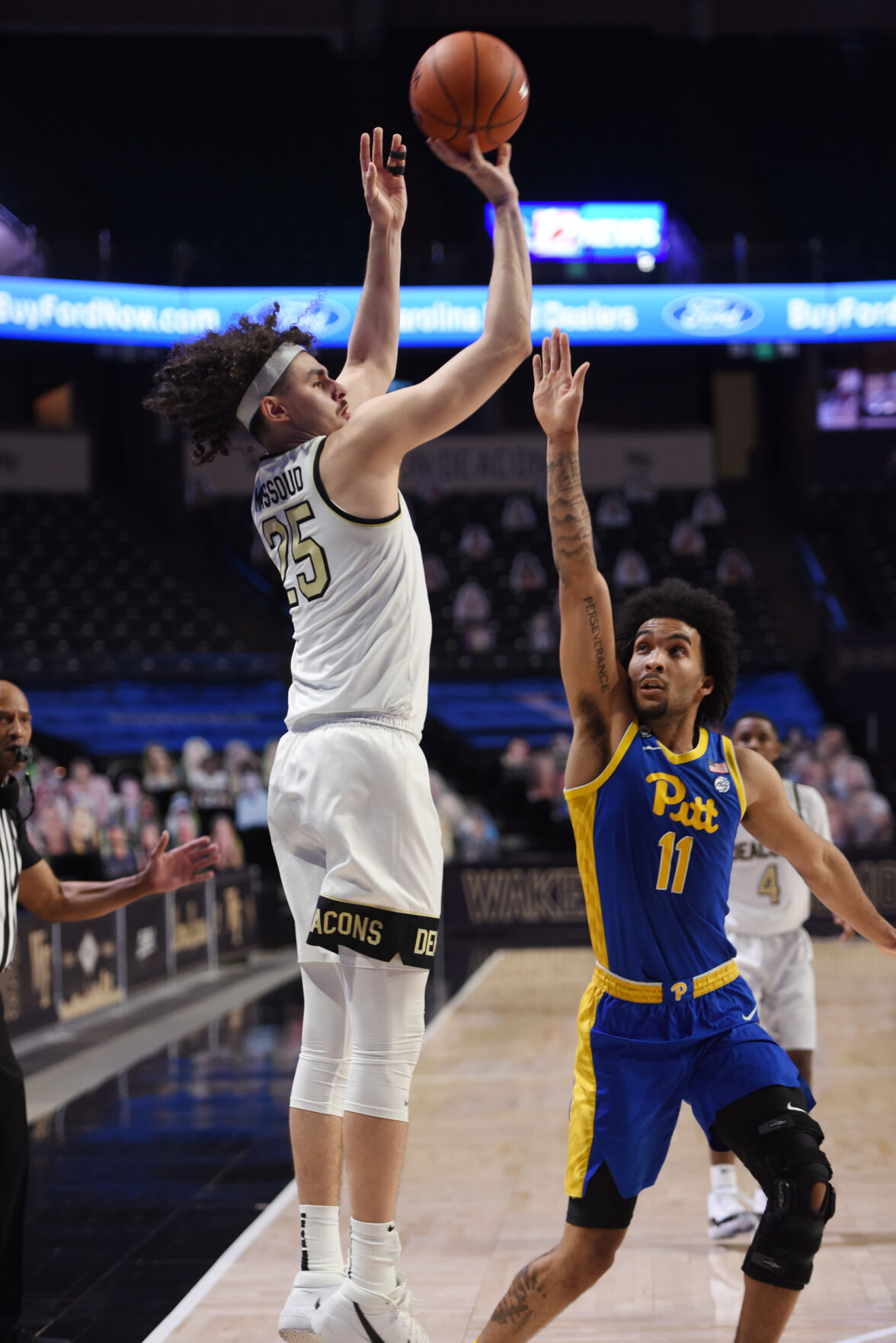 Wake Forest's Ismael Massoud shoots a 3-pointer over Pitt's Justin Champagnie in the Deacons' 76-75 win on Saturday, at Joel Coliseum in Winston-Salem. 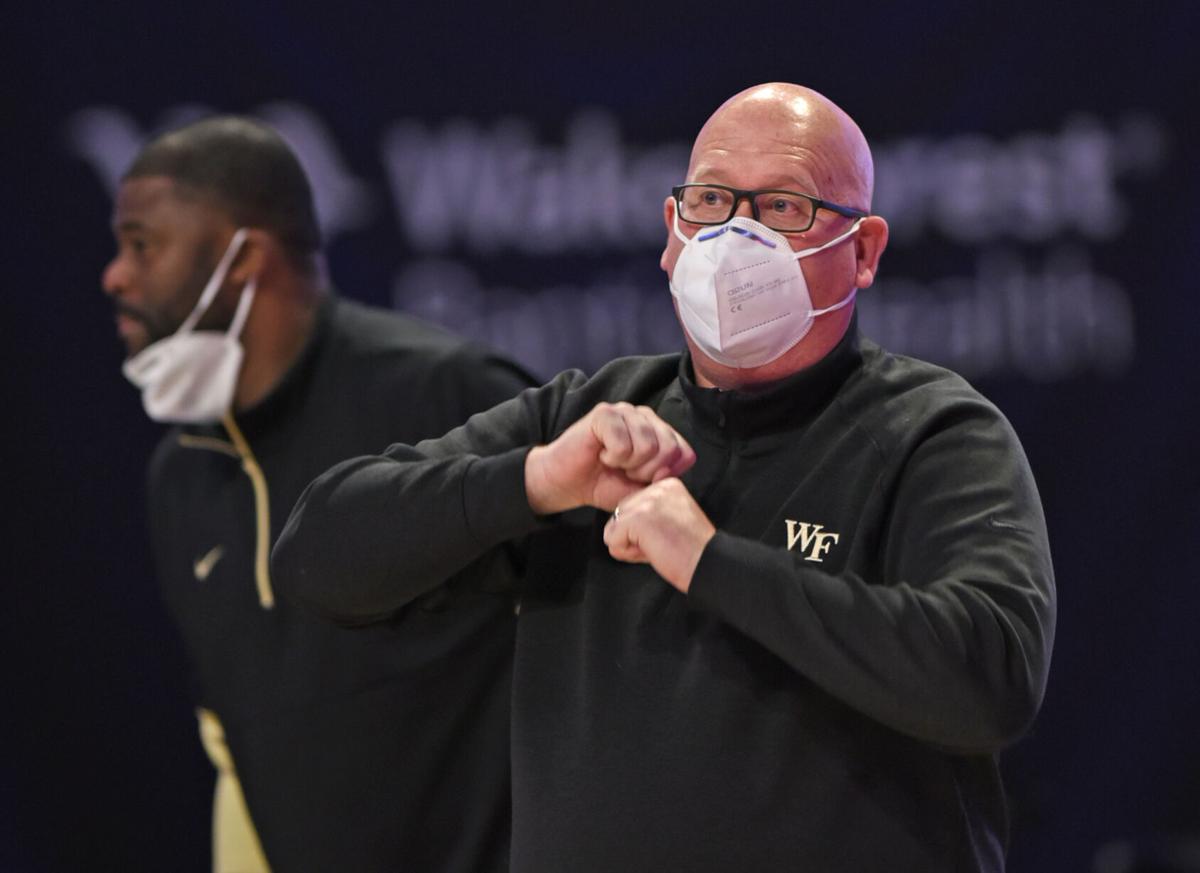 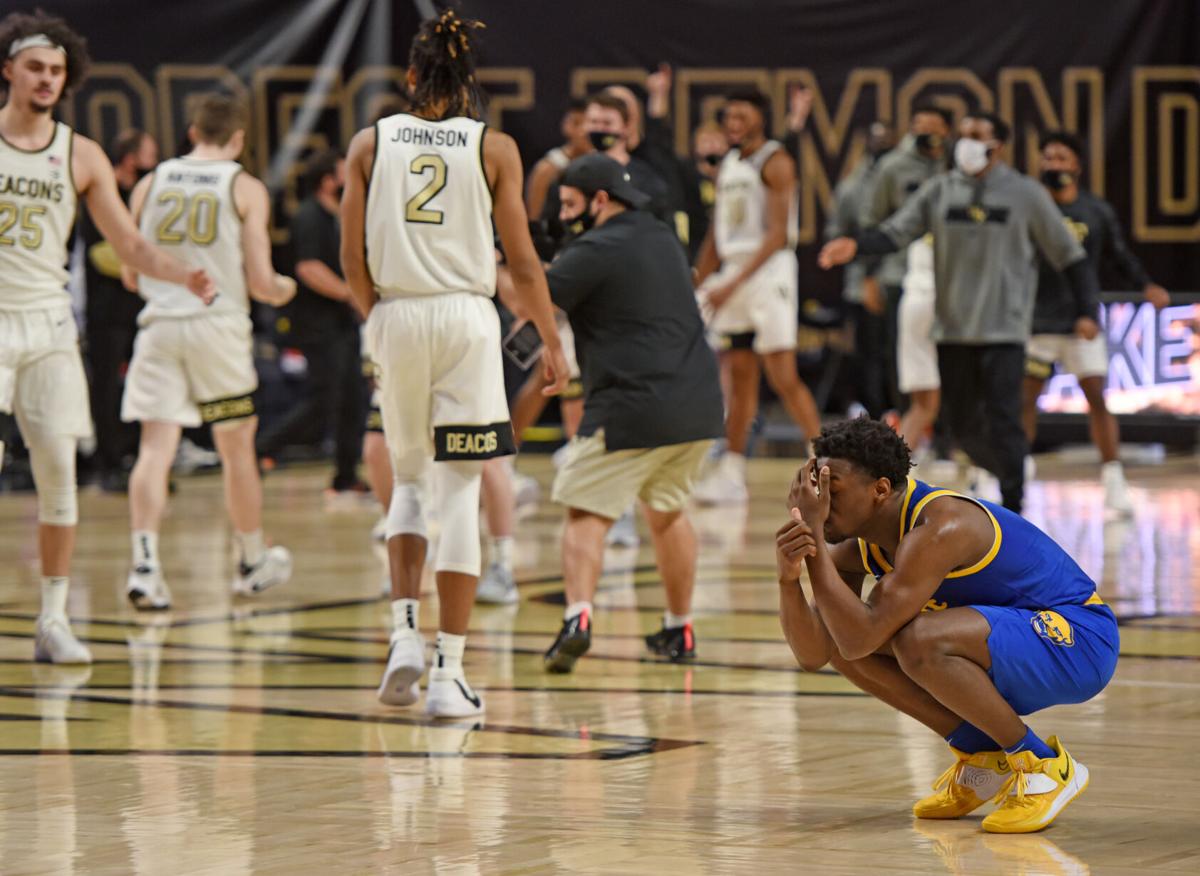 Pitt's Xavier Johnson reacts after missing a shot at the buzzer in the Panthers' 76-75 loss to Wake Forest in an NCAA basketball game, Saturday, Jan. 23, 2021 at Joel Coliseum in Winston-Salem, N.C. (Walt Unks/Winston-Salem Journal) 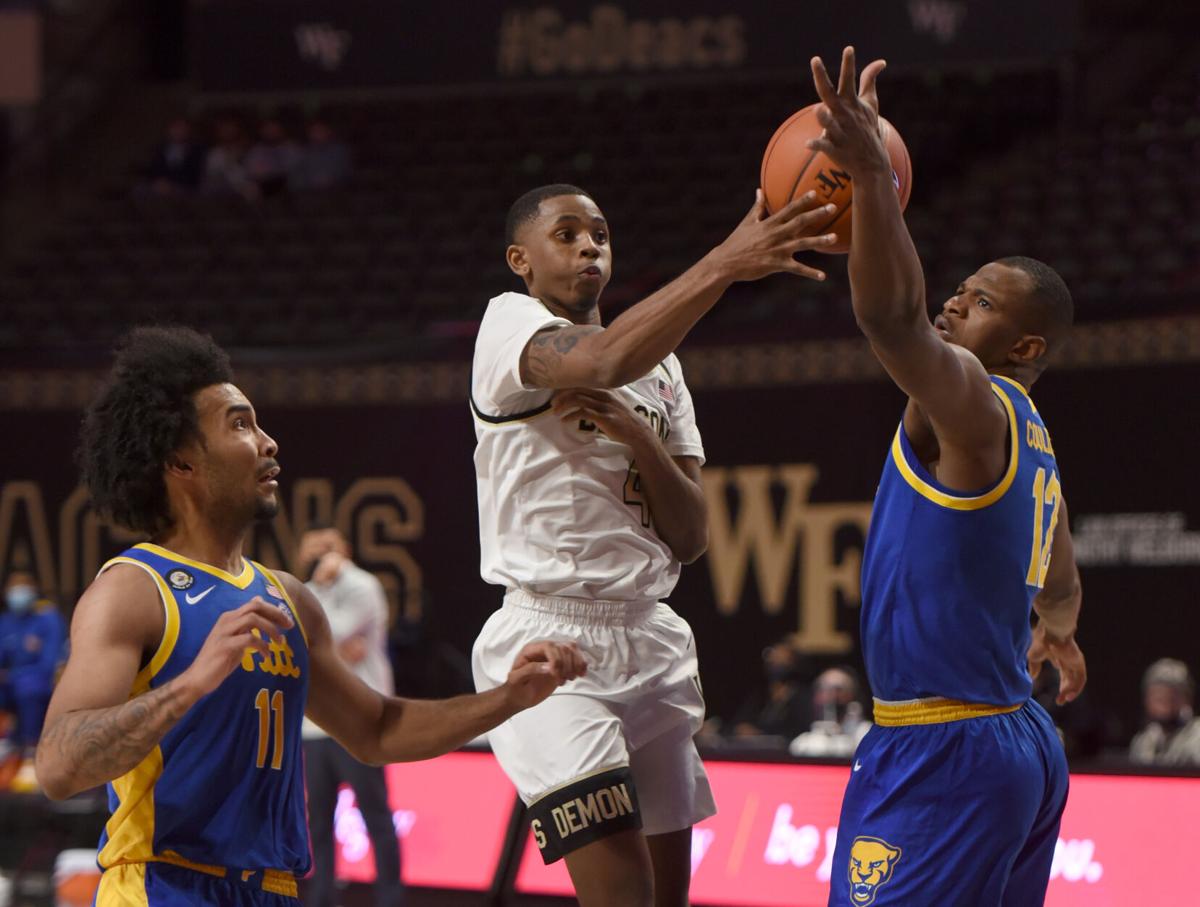 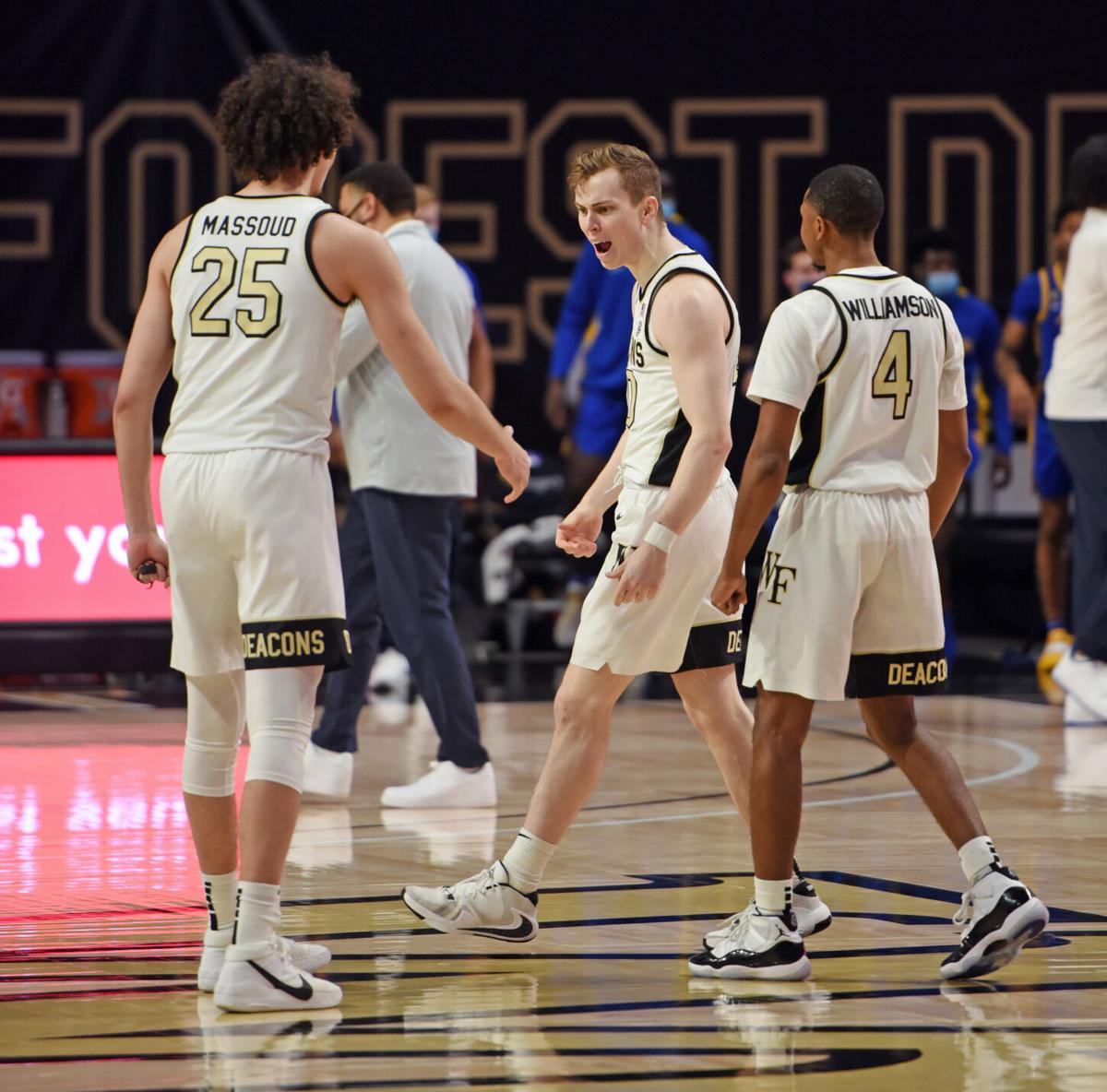 Wake Forest's Jonah Antonio celebrates with Ismael Massoud (25) and Daivien Williamson after hitting a series of baskets in the second half in the Deacons' 76-75 win in an NCAA basketball game, Saturday, Jan. 23, 2021 at Joel Coliseum in Winston-Salem, N.C. (Walt Unks/Winston-Salem Journal)

When Daivien Williamson sat down at the microphone on Saturday night, he was beaming even before he fully peeled his mask off.

Finally it happened, the smile on the Wake Forest guard’s face seemed to say. A basketball team that played tight yet lost in its previous five games — and went winless in all the conference games it had played — broke through with a 76-75 victory against Pittsburgh.

“We won,” Williamson said. “That’s all I care about right there. We finally got that win in the ACC. I’m happy.

It wasn’t easy, by far. And it won’t be much easier the rest of the year, either. But a progress point appeared for a program that tried to start a new era with excitement while the world got in the way.

In the last few games, a new issue seemed to pop up with every opponent. Against North Carolina on Wednesday, it was turnovers (20, a season high). Against Virginia Tech on Sunday, the Deacons were outlasted in their tightest loss of the season. Before that, the team’s offense went cold in the second half against Louisville.

Those shifting issues were things Forbes mentioned earlier in the week. Finally on the other side of the conundrum, at least for one game, he seemed genuinely appreciative of the moment.

“It’s just one win, I get it,” Forbes said. “But it’s pretty special for me and for these guys considering what we’ve been through. And we fought really hard in every game that we’ve played. These guys play hard, man. Don’t take that for granted.”

The Demon Deacons hold off Pittsburgh.

With that said, it wasn’t a win that featured a smooth finish for Wake Forest, either. The Deacons held a 10-point lead, 75-65, as Ismael Massoud hit the last of his eight three-pointers with 4:49 remaining. Pitts threw the Deacons into a near spiral from there with a zone defense that clogged the offense and a press that made it difficult for Wake Forest to get the ball past halfcourt.

Wake Forest had five turnovers from that moment, with the final one nearly setting up a heartbreaking scenario. Williamson took an inbounds pass and got trapped in the corner. Forbes said in the huddle before that play, he reminded the team of its last time out. Use it it needed. Williamson wasn't able to before Pitt knocked the ball loose, giving the Panthers possession with 4.9 seconds and a chance at a game-winner.

Pitt’s Xavier Johnson pulled up for a mid-range jumper and the game, but the shot clanged off the rim.

Wake Forest opened ACC play this month at Georgia Tech, three days after it played its first game in more than a month after dealing with COVID-19 in the program. The Deacons followed that with four straight games against top 25 programs, two of which (Louisville and Virginia Tech) should be NCAA Tournament teams.

Grading success for a rebuilding program is hard enough, much less when a pandemic doesn’t rattle throughout the team facility. Massoud, who scored a career-high 31 points, said the coaching staff has helped keep the team’s mentality up through this gauntlet of tight finishes. The locker room’s demeanor, he mentioned, went from there.

“We’re just running our own race, and he’s big on that,” Massoud said of Forbes. “We’re not comparing ourselves to any other teams or any other years at Wake Forest because we have to run our own race and it’s a matter of living in the moment, trying to get better each and every day.”

Williamson knew what he was signing up for when he opted to follow Forbes from East Tennessee State to Wake Forest as a transfer. In his first two college seasons, the Buccaneers won 24 and 30 games, respectively. In that second one, he and Forbes won a Southern Conference title together and were set for an NCAA Tournament berth until COVID-19 stopped the sporting world.

Leaving a program in which he’d experienced success for a program in need of change, Williamson wasn’t nervous about the decision. The Winston-Salem native said he’s seen more than enough to validate the change.

The Wake Forest program still has a ways to go. For at least Saturday, the Deacons had gained some headway, and it gave Williamson more than enough reason to smile.

“I know at the end of the day, we might not be the most talented team but we’re going to play hard every time we step on the court,” Williamson said. “And playing hard that’s something that’s always going to get you some wins.

“... That’s the one of the reasons why I know we’re making progress.”

Wake Forest's Ismael Massoud shoots a 3-pointer over Pitt's Justin Champagnie in the Deacons' 76-75 win on Saturday, at Joel Coliseum in Winston-Salem.

Pitt's Xavier Johnson reacts after missing a shot at the buzzer in the Panthers' 76-75 loss to Wake Forest in an NCAA basketball game, Saturday, Jan. 23, 2021 at Joel Coliseum in Winston-Salem, N.C. (Walt Unks/Winston-Salem Journal)

Wake Forest's Jonah Antonio celebrates with Ismael Massoud (25) and Daivien Williamson after hitting a series of baskets in the second half in the Deacons' 76-75 win in an NCAA basketball game, Saturday, Jan. 23, 2021 at Joel Coliseum in Winston-Salem, N.C. (Walt Unks/Winston-Salem Journal)