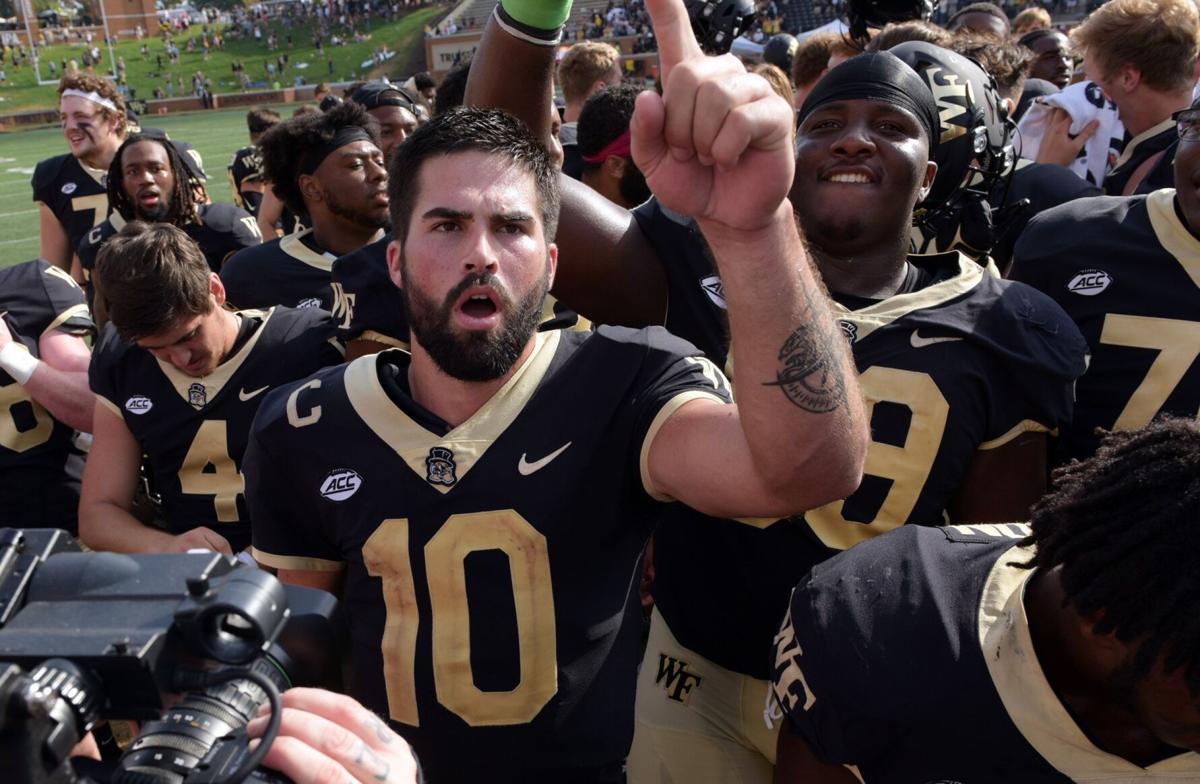 Quarterback Sam Hartman and other Wake Forest players acknowledge the student section after Saturday’s 37-34 win over Louisville, at Truist Field. 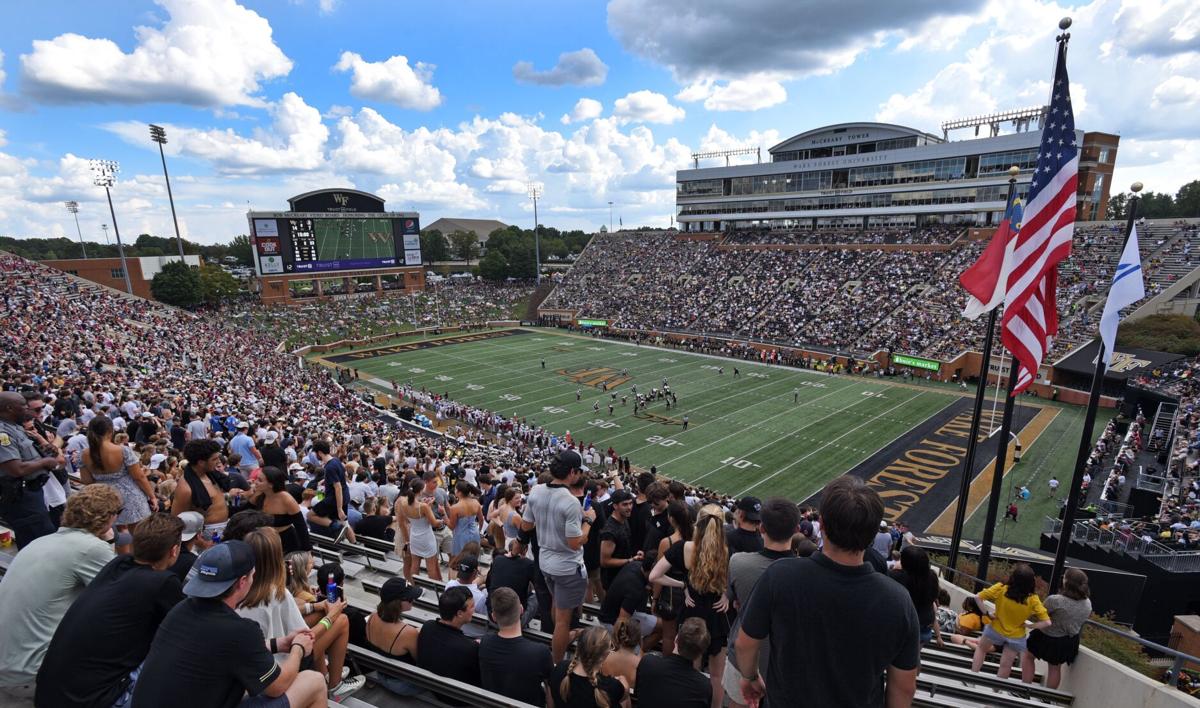 Wake Forest fans have come out in large numbers at Truist Field this season. The Deacons have averaged more than 26,000 fans in four home games and drew more than 29,000 in their last two games.

Wake Forest fans cheer during the first half of the win over Florida State at Truist Field last month.

Wake Forest is hot right now. And it’s the football program that’s bringing the heat, with a 5-0 record and a No. 19 ranking in the Associated Press’ Top 25.

There’s no better way to describe what’s happening on campus than second-year freshman Justice Ellison, a running back who had the game of his life on Saturday. He played vital minutes in the fourth quarter of the nail-biting 37-34 win over Louisville.

Ellison says students around campus have showered him and his teammates with praise, but also his professors are in tune what’s going on.

“My teachers are contacting me asking if they can come to a game,” said Ellison, who also played last year as a freshman. “It’s really amazing to be around a group of people outside the football team that’s really interested.”

Ellison said students have asked him how the team prepares, what they are eating to stay strong and other aspects of the program. He had no idea they knew that much about what the Demon Deacons are doing on a daily basis.

“It’s just great being around the atmosphere where everybody is embedded and loving the football team,” Ellison said.

Being the last undefeated team in the ACC also has the attention of a lot of people.

“We are hearing from more students for sure and that’s a good thing,” Ellison said.

The Deacons have played four of their five games at home and Coach Dave Clawson said he has loved the energy the student section has brought. While the students didn’t stick around too long during the two blowouts of Old Dominion and Norfolk State, they were there to sing happy birthday to Nick Sciba after his game-winning kick on Saturday.

Clawson goes into cliché mode when asked about any buzz around campus, because he’s focused on the next game. But he did acknowledge the student support has been greater than in past years.

“They seem bigger than what we traditionally get,” Clawson said. “I think it was really cool when they sang happy birthday to Nick Sciba.”

Ellison said he had a great conversation with a fellow student in his writing class about the Deacons’ style of play and what they’ve showed this season on the field.

“He was like ‘Man, I really love the way you all play together no matter what,’ ” Ellison said. “ ‘You have depth and great schemes all over the place, your defense is there and just everything about it.’ So it’s just amazing for somebody to see what we’ve been doing.”

Clawson said he’s noticed his players talking about the support, and that’s a big deal at a small campus.

“I think our players feel like what they do is important,” Clawson said.

The Deacons have a chance to go 6-0 for the first time since the leather-helmet days of 1944, and are favored by 6.5 points as they head to just their second road game of the season, at Syracuse. The luxury for the Deacons in the early part of their schedule was four home games in five weeks.

The ever-cautious Clawson said the hard part will be going on the road for five of their last seven games.

“We only play twice more at home and so we are going to have to be road warriors,” Clawson said.

The Deacons also have a lofty ranking at No. 19, but Clawson doesn’t look too closely at that other than it’s a signal his team is playing well.

“The ranking thing, we don’t get to into it,” he said about their highest ranking since being No. 19 in 2019. “I’m glad we’re playing well, and that our students and our fans feel that there we’re putting out a product that’s worth supporting.”

The Deacons were also 5-0 in 2019, but Clawson says he likes where this current team is because there’s more balance. He’s got experience, depth and the highest-scoring team in the history of the program averaging 38.4 points a game.

No. 19 Wake Forest at Syracuse

Wake Forest's football team lost at Clemson on Saturday 48-27, leaving the search ongoing for a spot in the ACC championship game.

The Demon Deacons will play their final home game on Saturday against N.C. State

Quarterback Sam Hartman and other Wake Forest players acknowledge the student section after Saturday’s 37-34 win over Louisville, at Truist Field.

Wake Forest fans have come out in large numbers at Truist Field this season. The Deacons have averaged more than 26,000 fans in four home games and drew more than 29,000 in their last two games.

Wake Forest fans cheer during the first half of the win over Florida State at Truist Field last month.