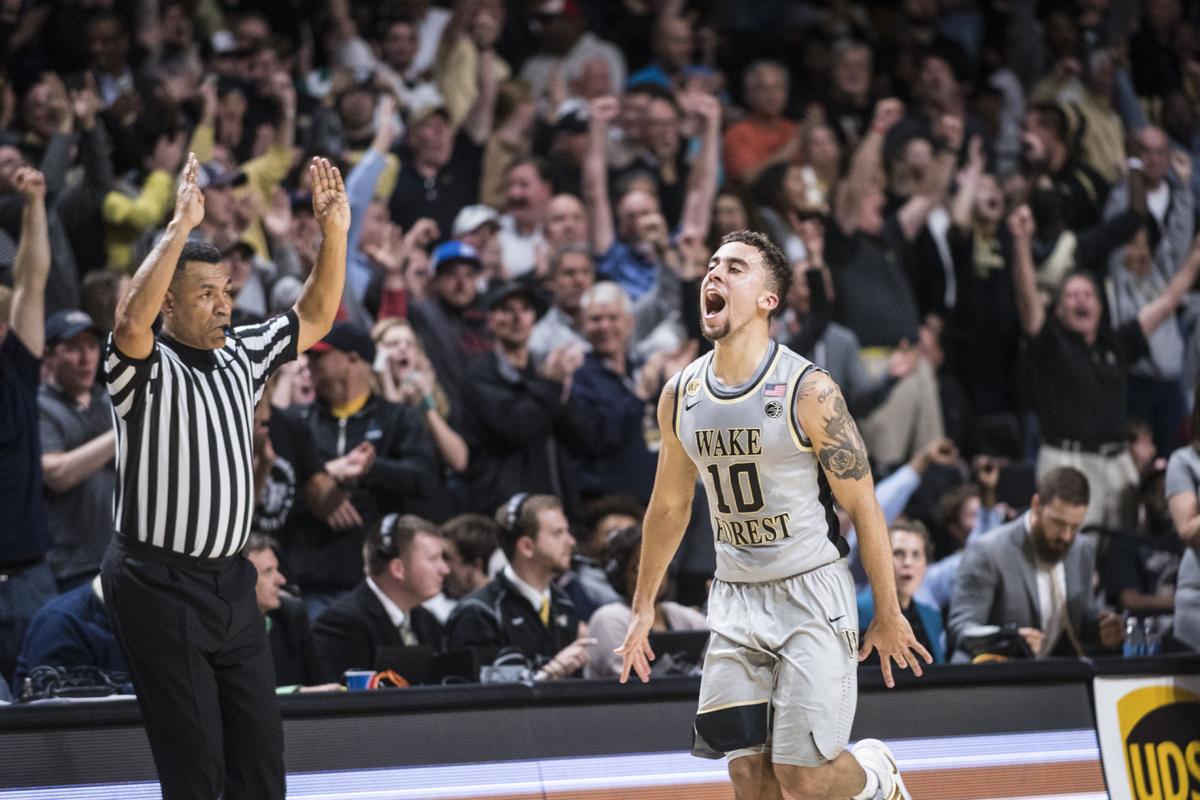 Wake Forest guard Mitchell Wilbekin celebrates after making a 3-pointer late in the second half of the Deacons’ 88-81 victory over No. 8 Louisville on Wednesday. Wilbekin’s shot gave the Deacons an 81-72 lead with about two minutes remaining that put the Deacons in position to win. 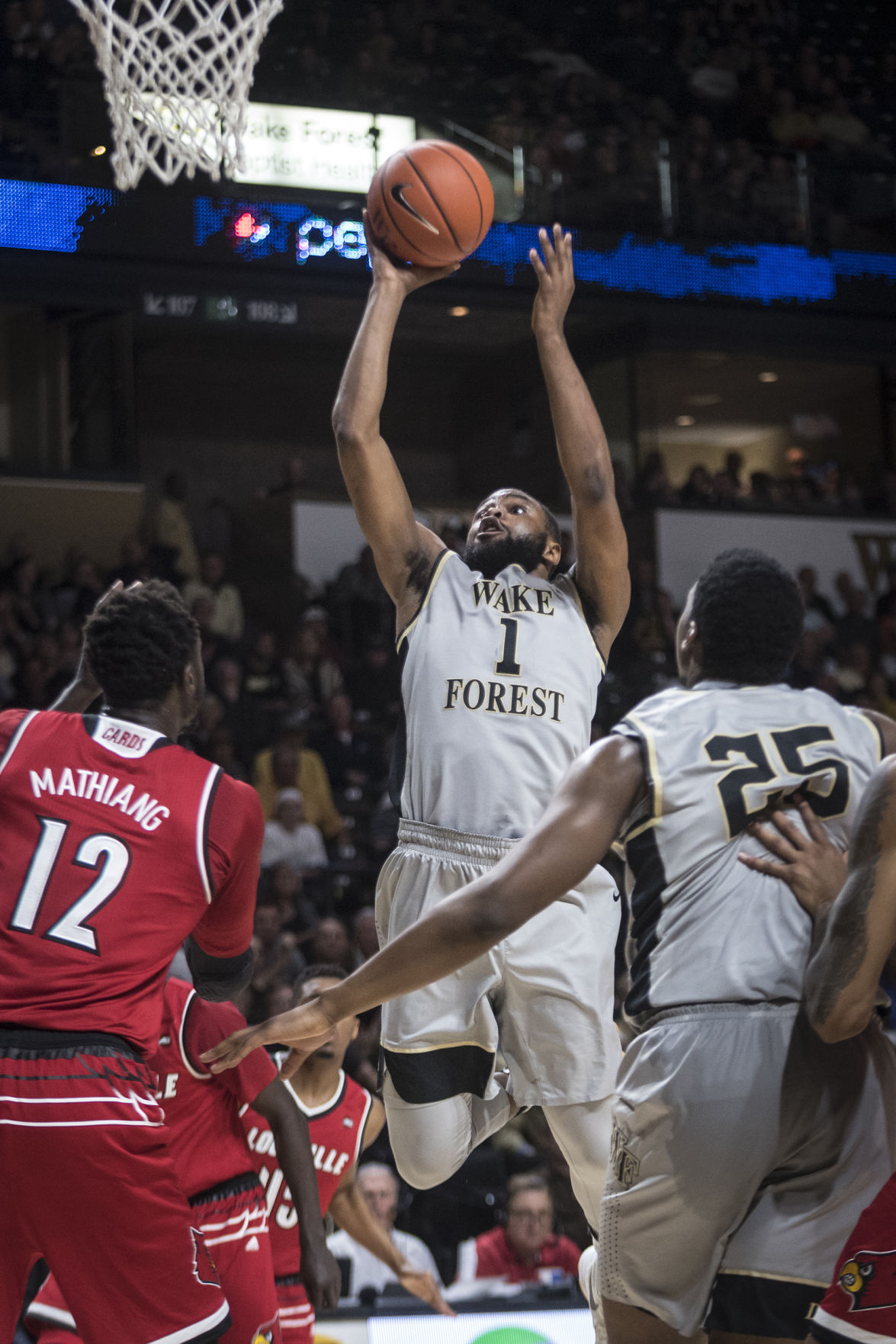 Wake Forest students who were in middle school the last time the Deacons’ basketball program was relevant nationally got to finally revel in the delirium they’d seen peers from other schools experience over the past seven seasons.

On Wednesday night, they finally got to storm the court at Joel Coliseum to celebrate a monster win over one of college basketball’s best teams. Making the scene all the more surreal was it came in March.

Wake Forest’s 88-81 victory over eighth-ranked Louisville was a long-time coming, making it all the sweeter for those fans more used to millstone losses this time of year than milestone victories. It’s too early to say that coach Danny Manning’s steadily maturing Deacons finally came of age, but they certainly showed signs of it with the program’s first victory over a ranked ACC team since Manning became head coach.

Asked to describe what the victory meant to him and what he has accomplished in three seasons as head coach, Manning immediately shared the moment.

“I’m happy for our guys,” Manning said. “We’ve had some near misses, and those don’t count. But to battle back in the Pitt game, to battle back in this game, and to continue to come into practice day in and day out with the positive attitude that they have.

“We had a lot of guys do a lot of good things to be successful.”

The Deacons entered the game with one box left unchecked on their NCAA Tournament questionnaire, the one asking if they had beaten any of the college teams hardest to beat. Louisville has been hard to beat all season, winning seven of its previous nine games to carry a 22-7 overall record and 11-5 ACC mark into its next-to-last regular-season game.

“That’s one of the better teams in the country,” Manning pointed out.

John Collins, a candidate for ACC Player of the Year who led the Deacons with 25 points, 11 rebounds and two blocks, seemed relieved to no longer have to answer a question he had been asked for weeks.

“Our record was missing a win against a ranked opponent, and we came together and got it,” Collins said. “We came down in the clutch and hit some big shots and played some D, grabbed some boards and came out of here with a win.

“There’s nothing else we need to say. We played how we needed to play and won.”

In the estimation of coach Rick Pitino of Louisville, the upset should be enough to earn Wake Forest a spot in the 68-team NCAA Tournament field for the first time since 2010.

“By beating the number eighth-ranked team in the country, and being 17-12 and 8-9, they’ve pretty much got themselves in,” Pitino.

Manning, to the surprise of no one who knows him, cautioned that there’s work left to be done — starting with Saturday’s regular-season finale at Virginia Tech.

“We feel fortunate to get the win, and when the regular season is over, we’ll see where we stand and we’ll go from there,” Manning said. “But we need to continue to ride this wave of momentum that we’re on right now.”

The victory over Louisville did signify, however, how much Manning has accomplished in his 91 games as Wake Forest’s head coach.

Pitino said earlier this week that Manning should get consideration for ACC Coach of the Year, which hardly sounds outlandish given the Deacons’ leap from two conference victories a season ago to eight going into the final regular-season game.

So, the contributions of Collins and Keyshawn Woods (20 points, four rebounds, four assists) aside, it seemed entirely appropriate that the two biggest shots of the game were made by two players who have been through as much with Manning as anybody.

After Louisville chopped an 11-point Wake Forest lead to three in the final frantic moments, it was juniors Dinos Mitoglou and Mitchell Wilbekin who drained the back-to-back 3-pointers that lifted the Deacons over the hump.

Wilbekin was key to both baskets, penetrating and passing to Mitoglou in the corner for the first and launching a long-distance 3-pointer with two seconds left on the shot clock on the second.

“Keyshawn gave me a good pass, I saw the clock was running low, I let it fly,” Wilbekin said. “I was in the parking lot.

“But with the shot clock winding down, you’ve got to get it up.”

So just what has Wilbekin seen transpire in his three seasons in the Wake Forest program?

“A lot of growth,” Wilbekin said. “Freshman year, sophomore year, junior year, the three years have been tremendous as far as growth.

“Also bringing in great players, people who were able to develop the right way under coach Manning and the assistants. So this is just huge for our program.”

Wake Forest gets signature win over No. 8 Louisville

Wake Forest’s first ACC victory over a ranked opponent since Danny Manning became head coach could hardly have come at a better time.

If It Was Collins' Goodbye, It Was One Worth Remembering

There were two candidates for ACC Player of the Year on the court Wednesday night when Wake beat No. 8 Louisville 88-81, and one of them actua…

My Take On Wake: A Wake Victory That Was a Long Time in Coming

Once Wake got knocked on it posterior in the frantic, opening minutes of tonight's pivotal game against No. 8 Louisville, Danny Manning said h…

Wake Forest guard Mitchell Wilbekin celebrates after making a 3-pointer late in the second half of the Deacons’ 88-81 victory over No. 8 Louisville on Wednesday. Wilbekin’s shot gave the Deacons an 81-72 lead with about two minutes remaining that put the Deacons in position to win.