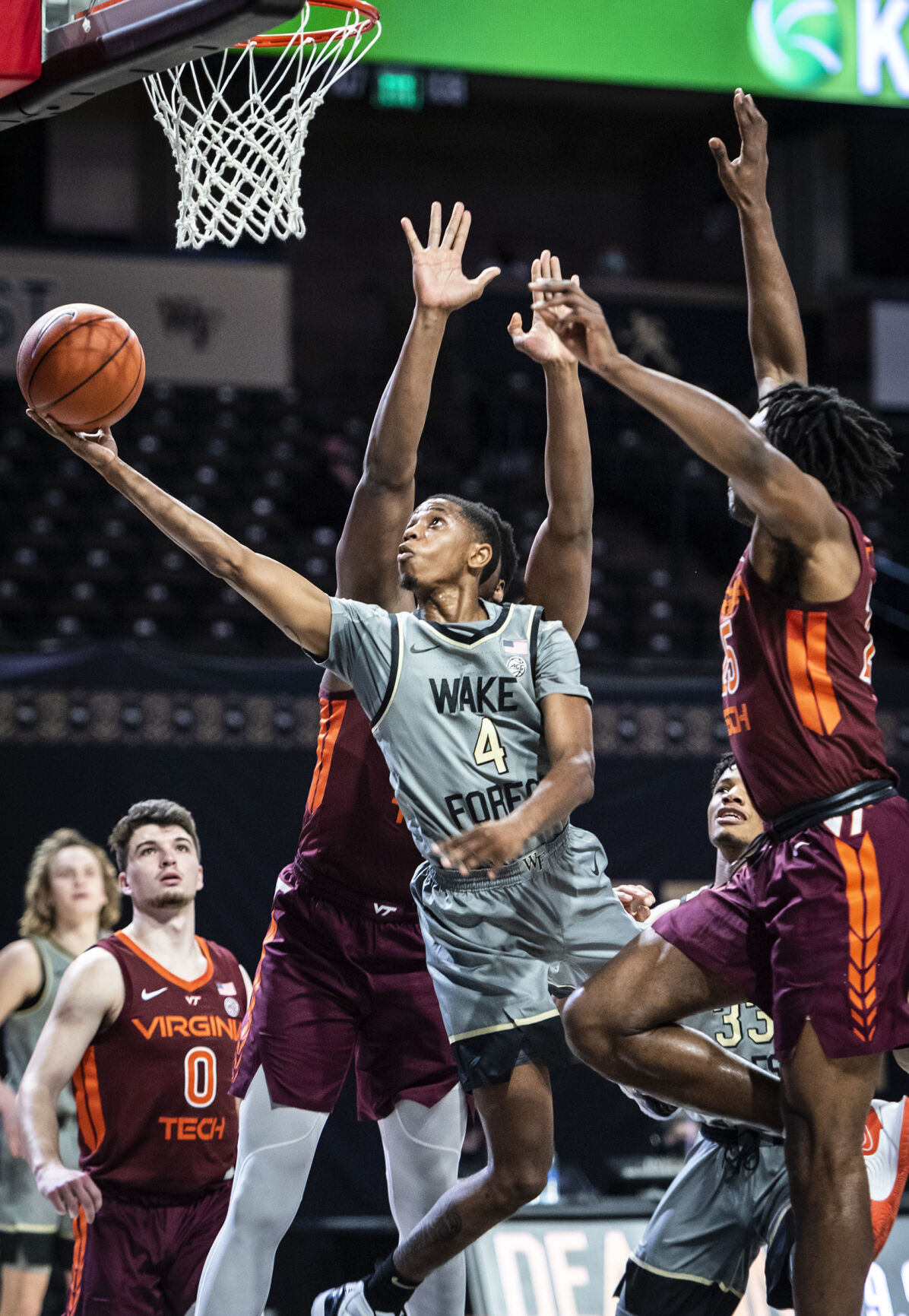 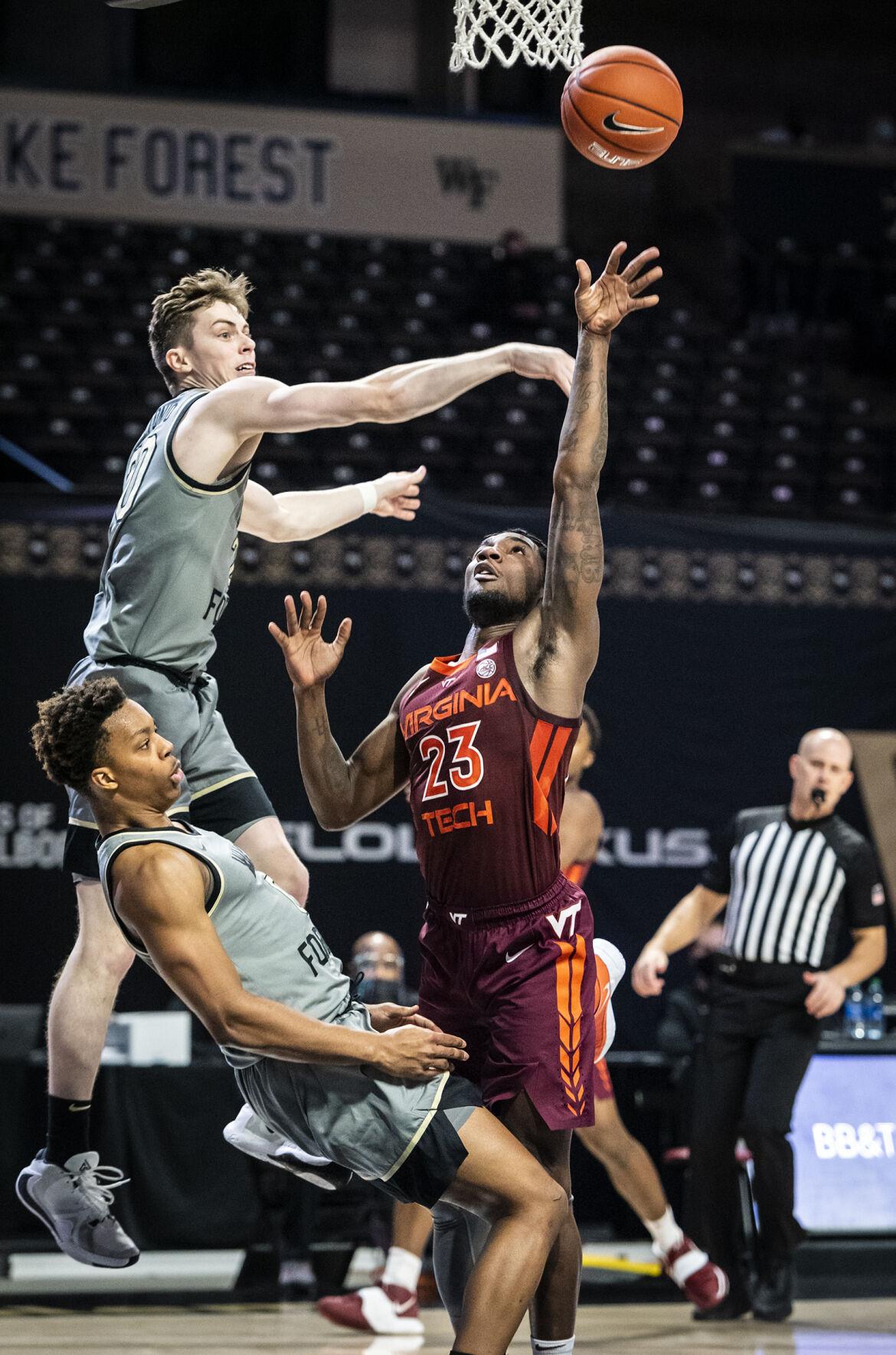 Wake Forest's men basketball team lost to No. 20 Virginia Tech 64-60 on Sunday at Joel Coliseum, tying the score twice late in the second half but missing opportunities in a fourth straight game against a ranked team.

• Wake Forest’s second-half hopes were met by Virginia Tech surges. An Isaiah Wilkins 3-pointer pulled the Deacons within two, and Virginia Tech responded with an 8-0 run.

With 10:47 left in the half, Wilkins notched a steal-and-score after another Deacons surge to make it a 44-42 Virginia Tech lead. A Jahcobi Neath layup tied it up about a minute later, and after a Virginia Tech response, Mucius scored inside off an offensive rebound to tie it again. But Virginia Tech pulled away once more, only for Wake Forest to make one last assault.

Daivien Williamson hit a 3-pointer with 1:13 remaining, cutting Virginia Tech's led down to 57-55. But Virginia Tech's Tyrece Radford hit six free throws in the final minute to keep the Hokies ahead.

"I think that's a reflection of them and the way we go about our day," Wake Forest coach Steve Forbes said. "... We understand that things aren't going to come easy, and in the guts of the game you've got to adjust and you've got to make changes.

"And I thought they adjusted to the game as the game went along. We kept fighting. We never let them get away from us."

• The first half featured ugly basketball from both teams. But for Wake Forest, it was a battle just to simply score, even with its massive offensive rebounding advantage — 11 to Virginia Tech’s three — during the half.

Virginia Tech’s length led to contested shots for the Deacons. The Hokies had nine blocks by halftime, contributing to Wake Forest’s 22.6 percent shooting (7-for-22) in the first half.

Still, the Deacons trailed by just six at halftime, 29-23.

• Wake Forest kept the hot-shooting Jalen Cone quiet in his return to the area.

The Walkertown High grad didn't score against the Deacons, shooting 0-for 4-from 3-point range. In the previous five games, he'd scored at least 18 points in four of them.

"We know how well Jalen Cone can shoot the ball, so we really had to just lock in off him and try to run him off of screens and try to make him do something else tonight," Williamson said.

The only issue for Wake Forest is that his teammate N'Guessan helped to pick up the scoring load. The Netherlands product had three three-point plays in a 13-point performance in which he went 5-for-5.

"Of course it's frustrating because you know we're right there and we feel like we could've won all of these games. But right now, it's just about going into practice the next day and getting better and just learning what we can from these games. So that like you said, we started the ACC schedule with some of the best teams in the country and in the conference, so if we know we're able to be in these games and have a chance to win with these guys, it's only going to make us better going forward." — Massoud, on the four close games the team has played against ranked teams.

Steve Forbes on his ejection: 'I'm always going to fight for my team and my players and Wake Forest University'

Wake Forest's halftime procedure against Duke was no different than any other basketball game this season.

Mike Wilbon thought he knew a lot about NBA superstar Chris Paul, but he had no idea about one trait until they started working on a book together.

Three thoughts ahead of Wake Forest's basketball game against Clemson

The Wake Forest men's basketball team will try to shake off a two-game losing streak with a home game against Clemson on Wednesday.

After following up a strong performance with a disappointing one, the Wake Forest men's basketball team will try to move on against N.C. State…

Pioneer: Charlene Curtis, the first Black women's basketball coach hired in the ACC at Wake Forest, will be honored on Thursday

In a week's time, Wake Forest follows a high with two lows

Wake Forest falls behind early in a loss to N.C. State