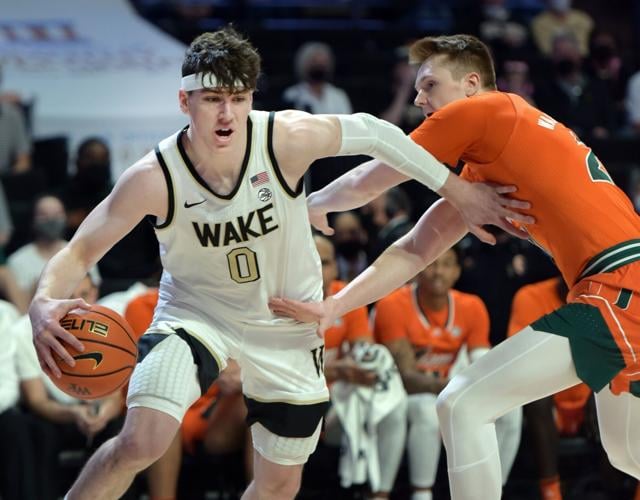 Wake Forest’s Jake LaRavia driving past Miami’s Sam Waardenburg during a game in February. LaRavia could be a first-round pick in Thursday night’s NBA draft. 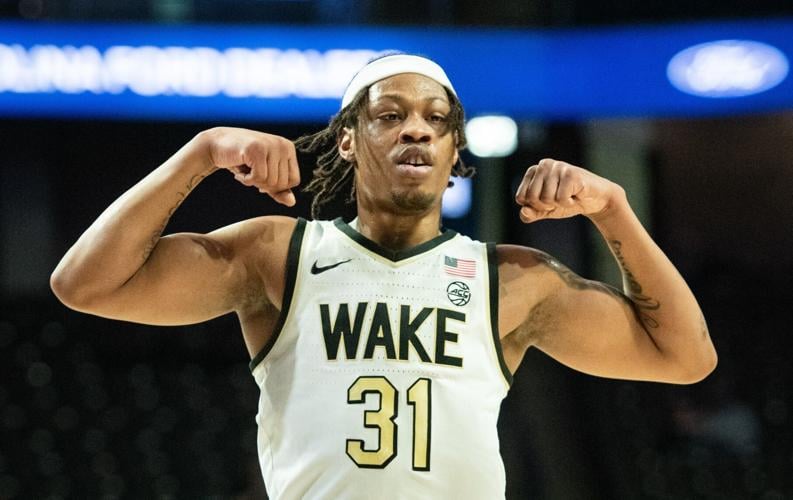 Wake Forest guard Alondes Williams is projected by some analysts to be a second-round pick in Thursday’s NBA draft.

Two (58 selections; normally 60 but Miami and Milwaukee lost picks because of tampering)

About Jake LaRavia and Alondes Williams

Alondes Williams, the ACC player of the year in his one season at Wake Forest, and LaRavia, a junior forward and also a one-year Demon Deacon, could hear their names called. Among the projections for LaRavia:

SportingNews.com: No. 32, Orlando Magic, second round

Among the projections for Williams:

No. 15, first round (from New Orleans Pelicans)

Among the draft prospects who will be on site:

Gonzaga's Chet Holmgren, Auburn's Jabari Smith and Duke's Paolo Banchero are set to make it a forward-heavy start to the NBA draft. The three top the list of players at the position and overall draft prospects, though it's unclear which might go No. 1 overall. All three possess size and open-floor potential with the ability to step outside. Iowa's Keegan Murray is another key name who is unlikely to have a long wait to be picked after the top three. Other names to watch include Baylor's Jeremy Sochan, Ohio State's E.J. Liddell and Wake Forest's Jake LaRavia. There's also a preps-to-pros prospect in Dominick Barlow from the Overtime Elite developmental program.

Nikola Jovic of Serbia and Ousmane Dieng of France are among the top international prospects in Thursday night's NBA draft. Both are 6-foot-10 and only recently turned 19 years old. They each possess great court vision and are good ball-handlers for their size. Jovic is a more accomplished scorer, having shot 35.6% from 3-point range for Belgrade club Mega. Dieng played for the New Zealand Breakers in Australia’s National Basketball League as part of its Next Stars program, which has become a hotspot for NBA prospects.

Memphis’ Jalen Duren, Duke’s Mark Williams and Auburn’s Walker Kessler are the headliners among big men in Thursday’s NBA draft. Each is a mobile big man with the ability to finish above the rim. Williams and Kessler also bring the potential to be elite rim protectors. Duren and Williams are potential lottery picks, and Kessler as a first-round prospect. Kessler was also named national defensive player of the year by Naismith and the National Association of Basketball Coaches. Other names to watch include Arkansas' Jaylin Williams and Arizona's Christian Koloko.

Arizona's Bennedict Mathurin, Duke's A.J. Griffin, Wisconsin's Johnny Davis and Kentucky's Shaedon Sharpe are among the top wing players in the upcoming NBA draft. Davis was a first-team Associated Press All-American, while Mathurin was a second-team pick. Griffin proved to be a capable 3-point shooter in his lone season for the Blue Devils. Sharpe never played for the Wildcats after being a midyear enrollee. Other names to watch include international prospect Ousmane Dieng, Ohio State's Malaki Branham, Kansas' Ochai Agbaji and LSU's Tari Eason. There's also the duo of Jaden Hardy and MarJon Beauchamp from the G League Ignite developmental program for elite prospects who bypass college.

Purdue sophomore Jaden Ivey is a top-5 prospect and the top point guard in this year's NBA draft. The 6-foot-4 Ivey was an Associated Press second-team All-American while averaging 17.3 points and 4.9 rebounds for the Boilermakers. His athleticism offers potential both as a scorer and a playmaker. Australian teenager Dyson Daniels is another lottery prospect after bypassing college to play in the G League Ignite developmental program for elite prospects. Other point guards to watch in the June 23 draft include Kentucky's TyTy Washington Jr., Tennessee's Kennedy Chandler and Arizona's Dalen Terry.

Wake Forest’s Jake LaRavia driving past Miami’s Sam Waardenburg during a game in February. LaRavia could be a first-round pick in Thursday night’s NBA draft.

Wake Forest guard Alondes Williams is projected by some analysts to be a second-round pick in Thursday’s NBA draft.