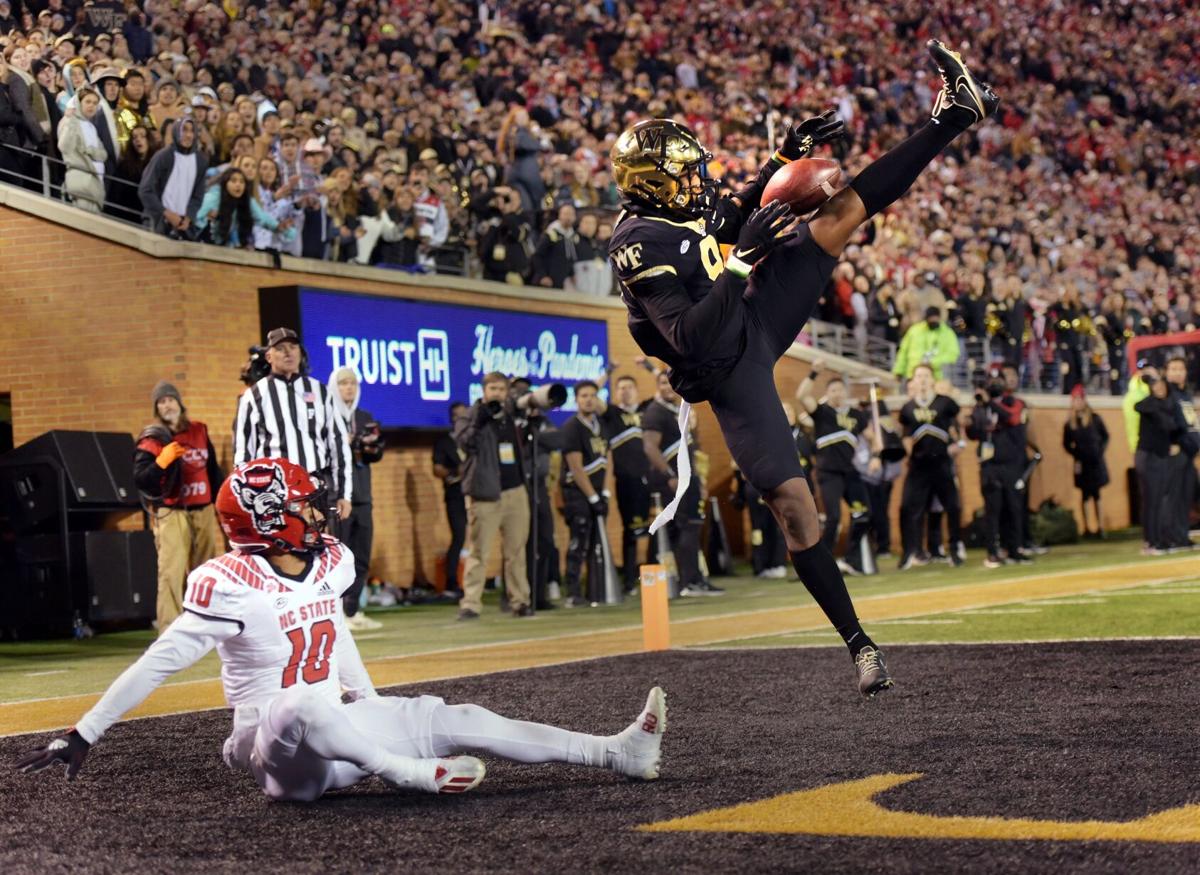 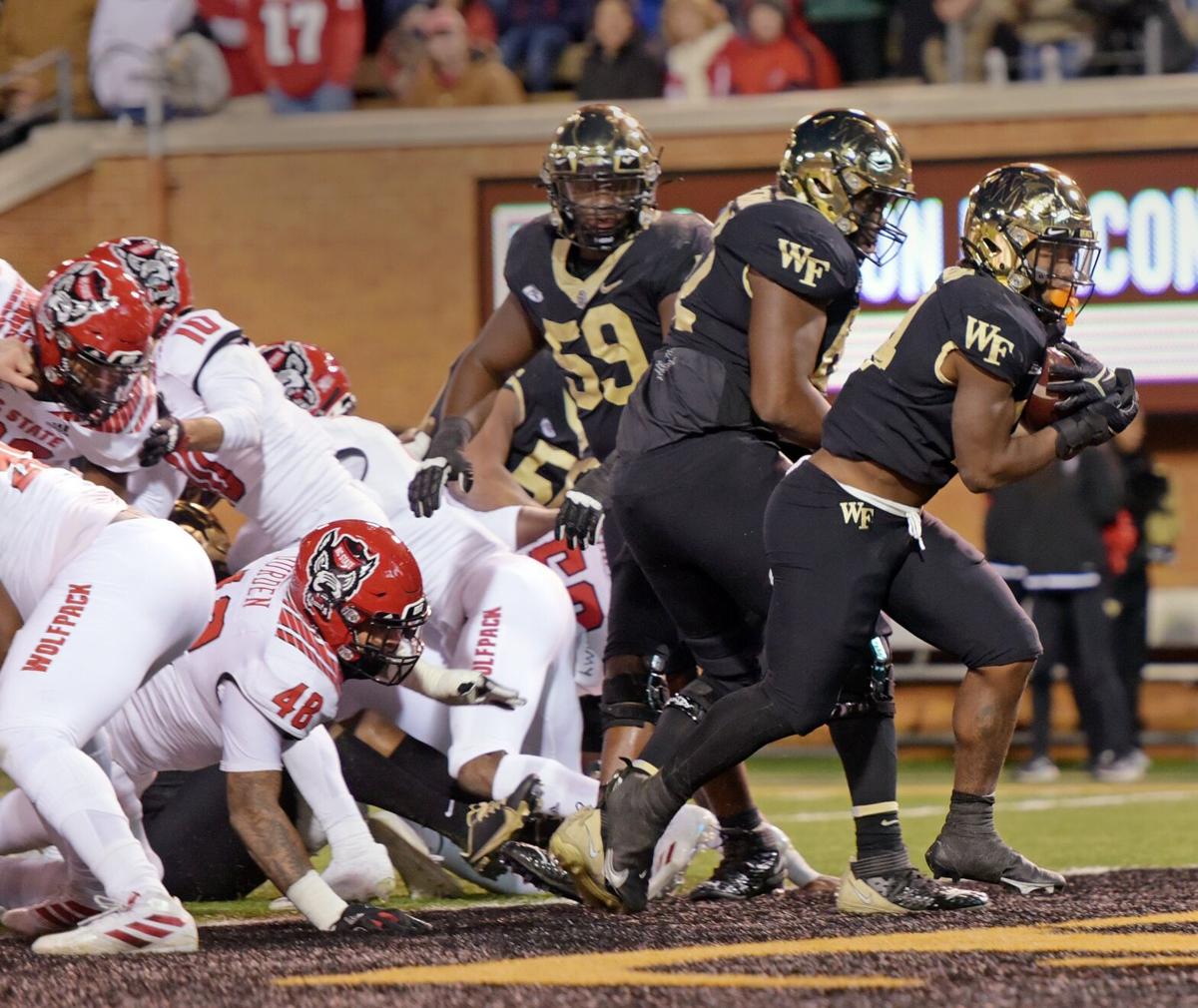 Wake Forest running back Justice Ellison scores on a one yard run in the first quarter of an NCAA football game, Saturday, Nov. 13, 2021 at Truist Field. 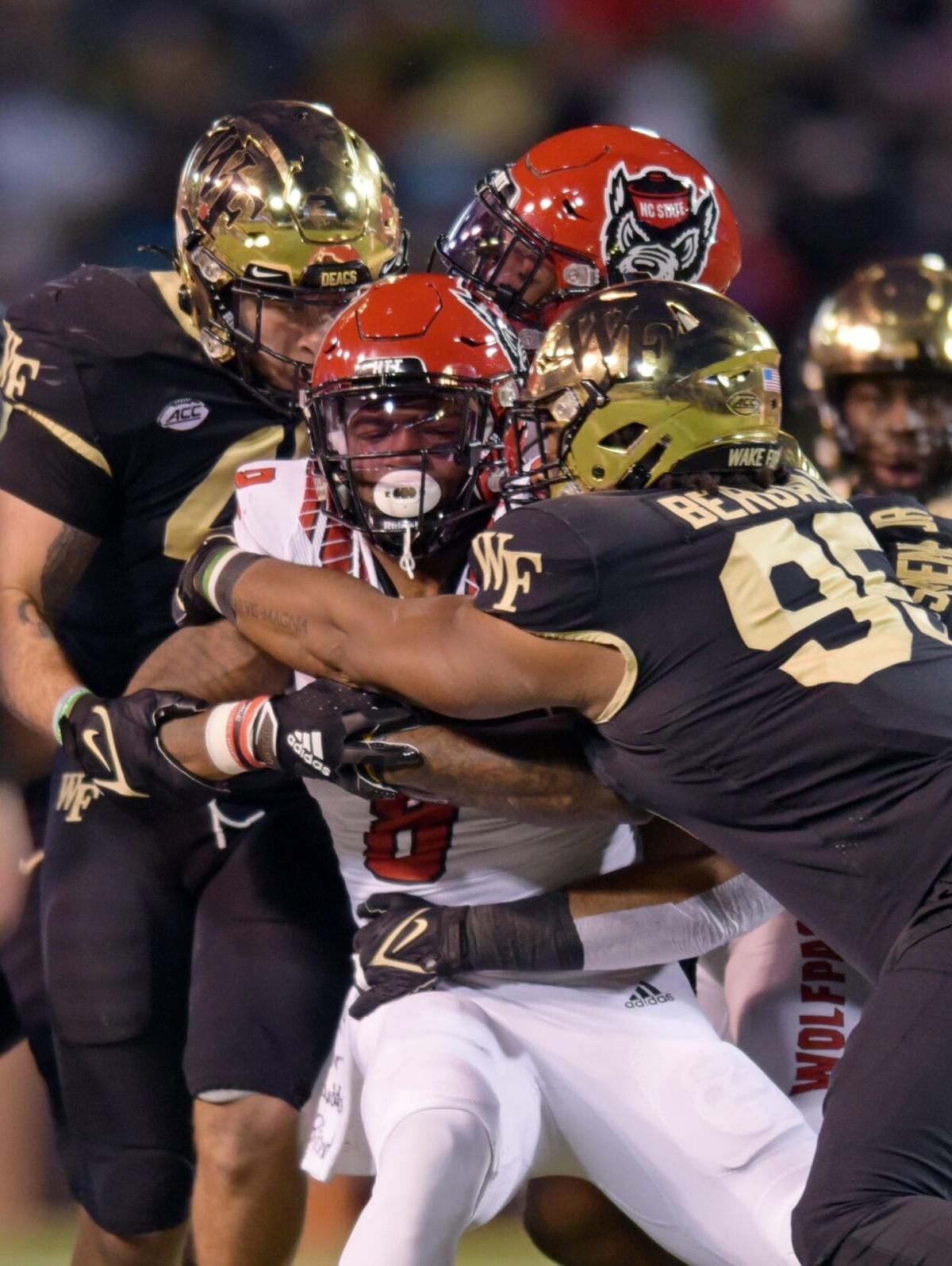 N.C. State running back Ricky Person Jr. is stopped behind the line of scrimmage in the first quarter of an NCAA football game, Saturday, Nov. 13, 2021 at Truist Field. 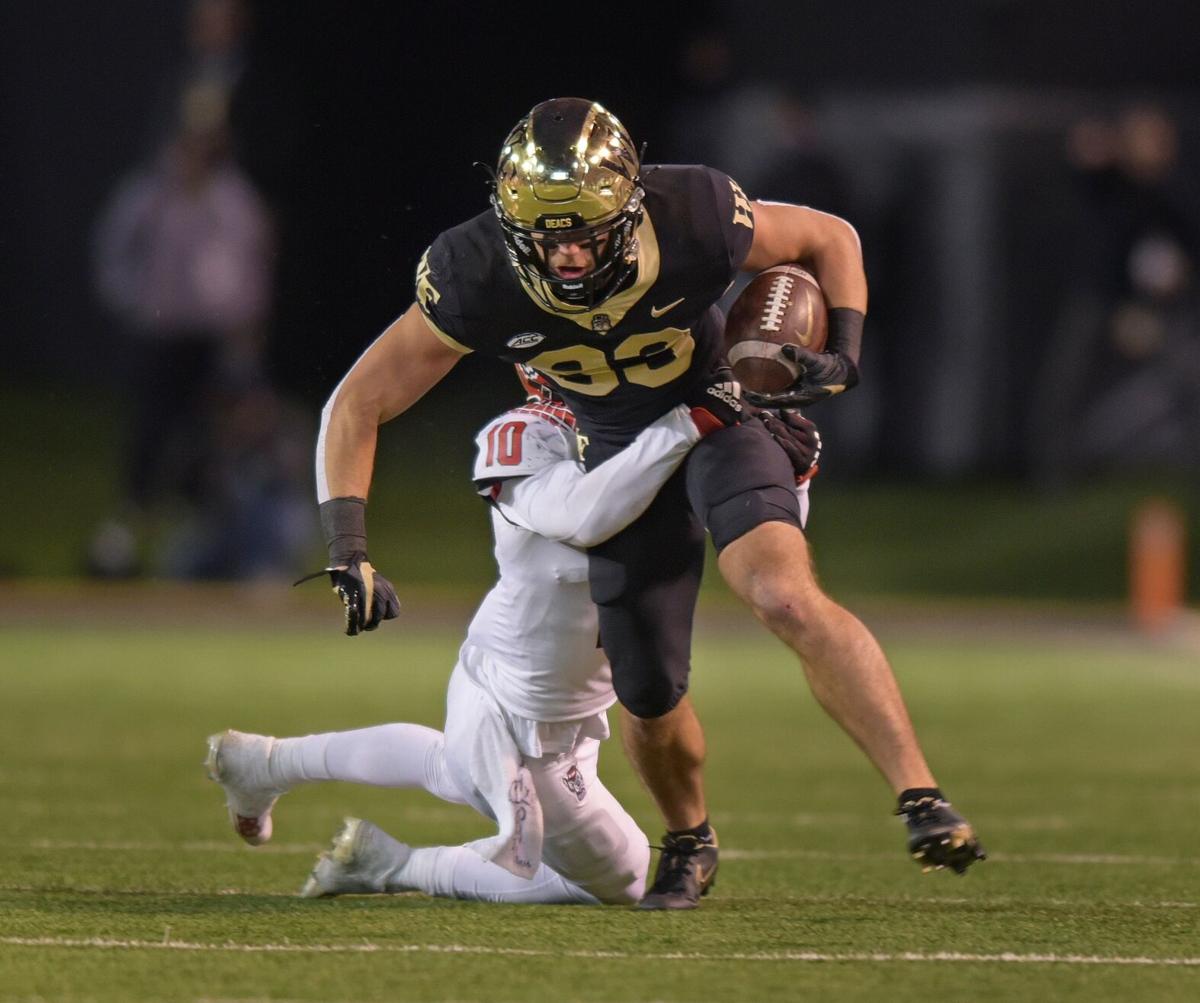 Wake Forest wide receiver Taylor Morin is taken down by N.C. State safety Tanner Ingle after a reception in the second quarter of an NCAA football game, Saturday, Nov. 13, 2021 at Truist Field.

It was the ultimate in pick-up football at sold-out Truist Field between 12th-ranked Wake Forest and 16th-ranked N.C. State on Saturday night.

The last team with the ball had the best chance to win.

The Demon Deacons wound up keeping the ball the most down the stretch to win 45-42 in front of 34,503 fans. It was the biggest crowd since the 2011 season and they saw the Deacons remain in control of the ACC’s Atlantic Division.

The Deacons improved to 9-1 overall and 6-0 in the division with road games left against Clemson and Boston College. The Wolfpack fell to 7-3 and 4-2 in the division.

Coach Dave Clawson of the Deacons talked earlier in the week about controlling their own destiny if they keep winning. With the win on Saturday they now have a little wiggle room because all they need is one win in their last two games to win the division and a berth into the ACC championship game on Dec. 4 in Charlotte.

“We’ve come a long way and there’s still two games to go, but it wasn’t a clean game,” Clawson said on ACC Network just after the game that ended around 11:45 p.m.

The clinching score for the Deacons came when quarterback Sam Hartman, who didn’t have his best day with three interceptions, guided them late. Justice Ellison scored from 4 yards out to give the Deacons a 45-35 lead with 1:47 left.

It was a 13-play drive that took up plenty of time and more importantly it gave the Deacons a 10-point lead.

The Wolfpack cut the margin to 45-42 with 45 seconds left on a touchdown pass from quarterback Devin Leary to Devin Carter. The Wolfpack nearly got the on-side kick but Ricky Person was ruled to have recovered it before the 10-yards that was needed on the kickoff.

The Deacons got the ball and ran out the clock to get the win. Fans in the student section and others emptied out onto the field and celebrated with the team.

Hartman and N.C. State quarterback Devin Leary combined to throw the ball more than 100 times as neither team could establish a running game.

Ellison, who picked up the slack with injured Christian Beal-Smith not in uniform, had two touchdowns on 17 carries for 56 yards and also caught a touchdown pass.

Wake Forest’s 21-6 lead evaporated over a two-minute span late in the half and on the opening kickoff to the second half. Return man Bam Knight electrified the N.C. State fans that filled out the visitors’ side of the stadium by going 100 yards for a touchdown and a 27-24 lead.

In the first half the Deacons played better on defense but let up late in the half, an inconsistency that Clawson has talked about this season.

The Deacons, however, did grab a 24-20 lead on the final play of the half when Nick Sciba made a 45-yard field goal. He missed one earlier in the half when his 53-yard attempt bounced off the crossbar.

Notes: Wake Forest honored Robert Grant and Kenneth “Butch” Henry on Saturday with the first Trialblazer Award. Grant, who rode on the back of the motorcycle with the Deacon mascot during the pre-game, and Henry were the first Black football players at Wake Forest joining the program in the fall of 1964…. Wake Forest has had back-to-back sellouts for the first time since the 2006 season…. Also being honored before the game were 21 Wake Forest seniors. Even though they have eligibility left, wide receiver Jaquarii Roberson, offensive lineman Zach Tom, kicker Nick Sciba and running back Christian Beal-Smith were among those honored indicating they will likely not return next season.... The only other time that Wake Forest and N.C. State met while both inside the Top 25 was on Nov. 21, 1992. The 13th-ranked Wolfpack beat the 25th-ranked Demon Deacons 42-14 in Raleigh. The two programs have played every year since 1910, one of the longest streaks in the country…. The Deacons will play at Clemson at noon on Saturday in another key Atlantic Division game. The Wolfpack will play at home against Syracuse.

He becomes the seventh Wake Forest coach to win the award 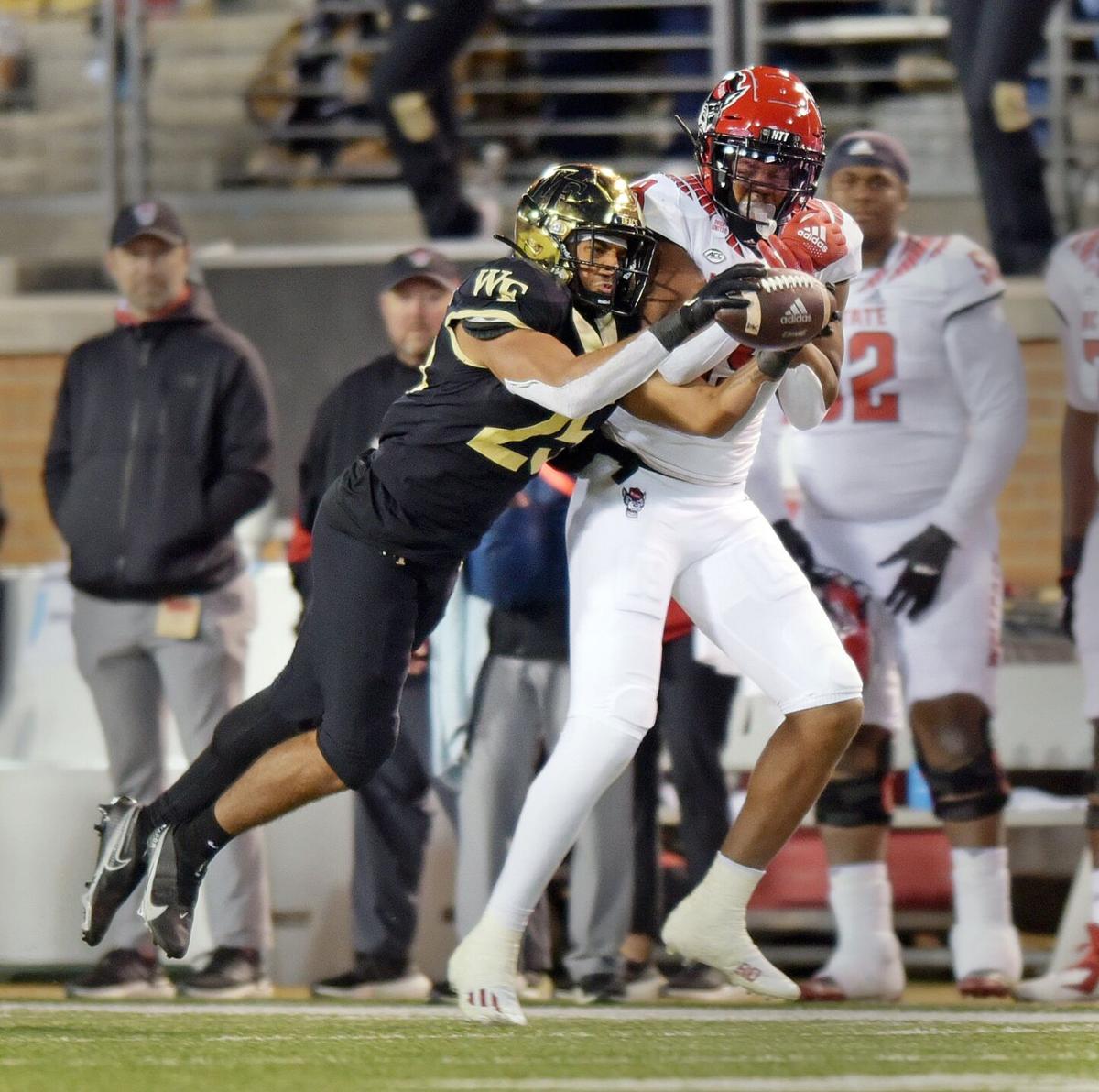 Wake Forest defensive back J.J. Roberts jumps in front of N.C. State wide receiver C. J. Riley III for an interception along the sidelines in the second quarter on Saturday.

Wake Forest running back Justice Ellison scores on a one yard run in the first quarter of an NCAA football game, Saturday, Nov. 13, 2021 at Truist Field.

N.C. State running back Ricky Person Jr. is stopped behind the line of scrimmage in the first quarter of an NCAA football game, Saturday, Nov. 13, 2021 at Truist Field.

Wake Forest wide receiver Taylor Morin is taken down by N.C. State safety Tanner Ingle after a reception in the second quarter of an NCAA football game, Saturday, Nov. 13, 2021 at Truist Field.