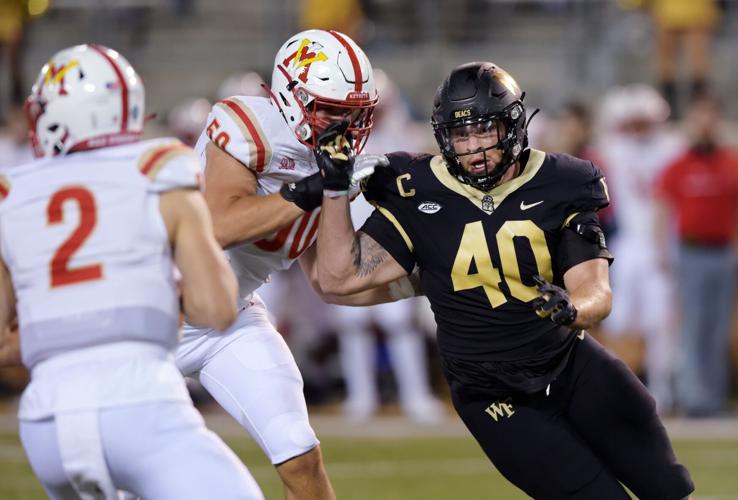 Wake Forest defensive lineman Rondell Bothroyd gets past VMI lineman Tristan Mann to sack quarterback Collin Ironside and force a fumble in the second half of the Deacons' 44-10 win Sept. 1. 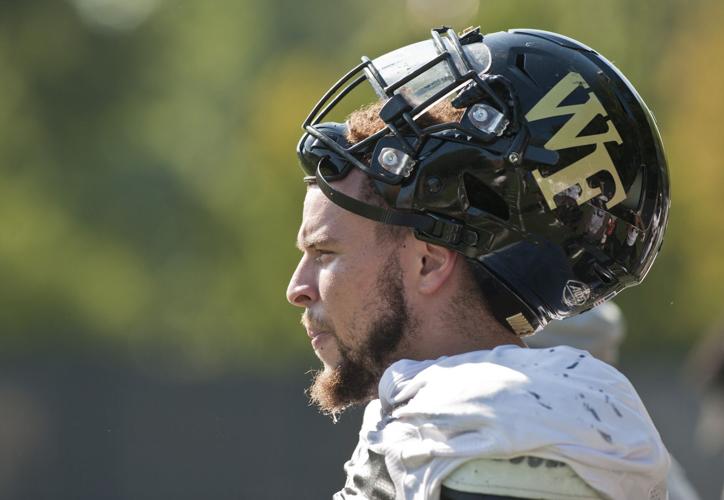 Wake Forest defensive lineman Rondell Bothroyd gets a break in between reps during practice. “Not only is he a good pass rusher, he’s a good run defender as well,” Coach Dave Clawson said.

Rondell Bothroyd doesn’t mind calling it the way he sees it around teammates and coaches at Wake Forest. He sometimes might go over the top to exaggerate just slightly, but the defensive end is confident in his ability.

“I have the best hands on the team,” Bothroyd said when asked about his time in high school when he played tight end.

While that may or may not be true about Bothroyd’s hands, the 21st-ranked Demon Deacons won’t need Bothroyd’s hands when they play fifth-ranked Clemson on Saturday at Truist Field. They’ll need his ability and experience on the defensive line.

The Tigers bring in a potent offense led by quarterback D.J. Uiagalelei and running back Will Shipley. They are averaging 41.3 points plus 425 yards of offense for a hefty average of 6 yards per play.

Bothroyd, a redshirt junior who is an edge rusher who also does a nice job of stopping the run, is probably the Demon Deacons’ best defensive player. He’s come into his own this season and is picking up where Duke Ejiofor and Boogie Basham left off.

“I think I understand and have a better feel for the game,” Bothroyd said about his improvement. “Sometimes, I don’t have to be all over the place like maybe last year.”

Coach Dave Clawson loves the way Bothroyd takes on the challenge of stopping the run or rushing the passer. It’s that dual threat on defense that makes Bothroyd so valuable.

“He’s tough, and he can feel leverage as well as any of the defensive ends that we’ve had here,” Clawson said. “He just has a knack for feeling what type of block is on him, whether it’s a zone block, a down block or a pass block.”

In three games he’s been in on 11 tackles, he has two sacks, forced a fumble and also recovered a fumble.

“Not only is he a good pass rusher, he’s a good run defender as well,” Clawson said. “We’ve had really elite pass rushers like Duke Ejiofor, and I would say he’s like Blake Whiteheart in a way. We’ve really had good receiving tight ends and good blocking tight ends, but Blake might be the best combination we’ve had. And I feel the same way about Rondell as a defensive end. We’ve had great run-stopping guys and elite pass rushers, but in terms of the combination of doing both, he’s one of the best at both.”

At a rangy 6 feet 4 and 265 pounds, Bothroyd is quick to the ball and likes to take an outside lane to the quarterback.

When asked if he’s a little quicker than last season when he was fourth on the team in tackles with 63 and led them in sacks with eight, he said: “A little bit.”

After two blowout wins over VMI and Vanderbilt the Demon Deacons had a wake-up call last week in holding off Liberty 37-36, according to Bothroyd, who is from Manchester, Conn.

The Demon Deacons have lost their last 13 games to the Tigers, with eight of those coming since Clawson arrived for the 2014 season.

“This would be a huge win, but any win is a big win,” Bothroyd said. “But with this being Clemson and them being known as the top dog in the ACC, if we win it’s a big deal at Wake and around the country.”

Bothroyd, who will graduate in December, said he’ll make a decision whether to return to Wake Forest after another bowl game. The Demon Deacons have gone to a bowl games the last six seasons.

As for Bothroyd’s confidence level, Clawson shakes his head.

“He thinks he’s the best basketball player on the team, the best receiver, the best tight end,” Clawson said. “You never worry about him in terms of confidence. We’ve never had to pump him up with that.”

In his senior year of high school Bothroyd played on offense and defense and had 15 catches for 215 yards and four touchdowns as a tight end.

“I should be (on the hands team for on-side kicks) but not sure why I’m not,” Bothroyd said.

Clawson said he’ll be glad to put Bothroyd on the hands team, but there’s a catch.

“I’ll tell him if he comes back next year,” Clawson said, “we’ll put him on the hands team.”

Wake Forest defensive lineman Rondell Bothroyd gets past VMI lineman Tristan Mann to sack quarterback Collin Ironside and force a fumble in the second half of the Deacons' 44-10 win Sept. 1.

Wake Forest defensive lineman Rondell Bothroyd gets a break in between reps during practice. “Not only is he a good pass rusher, he’s a good run defender as well,” Coach Dave Clawson said.