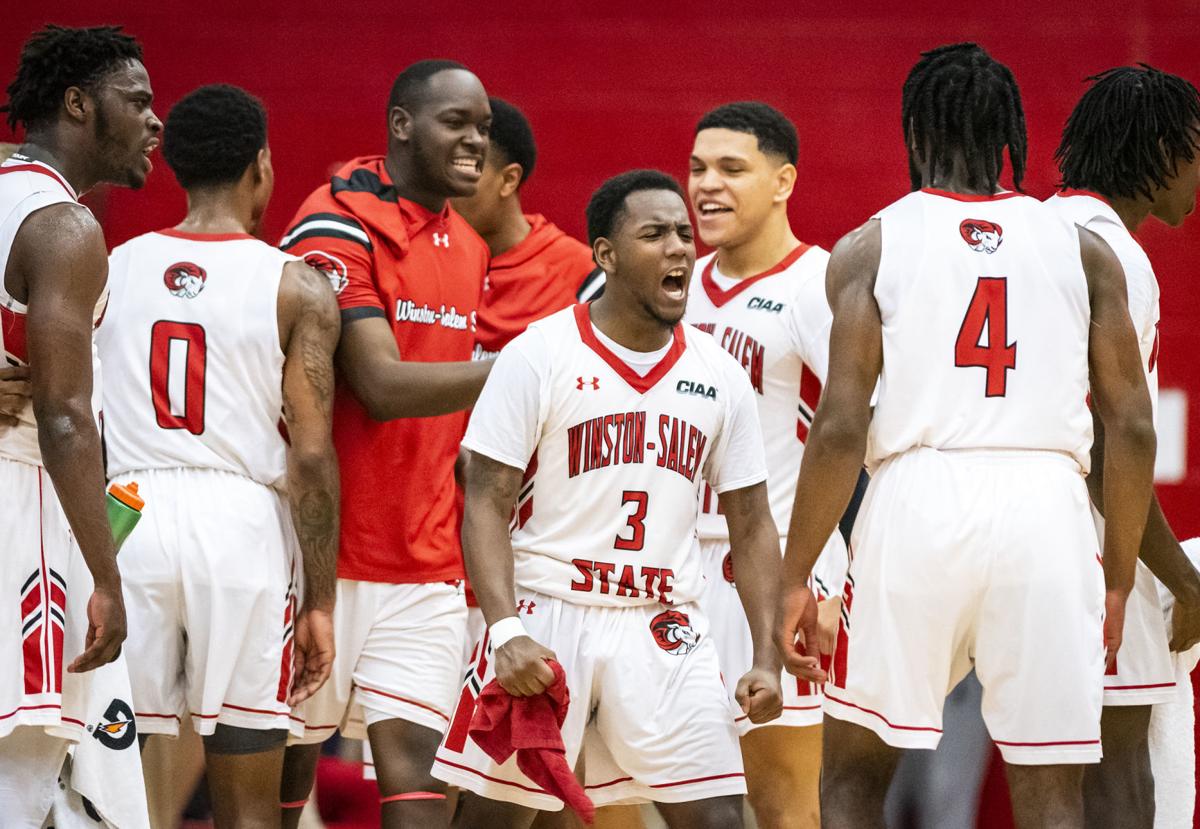 Senior Julius Barnes (center) was a big reason why the Rams won their third straight on Saturday night. 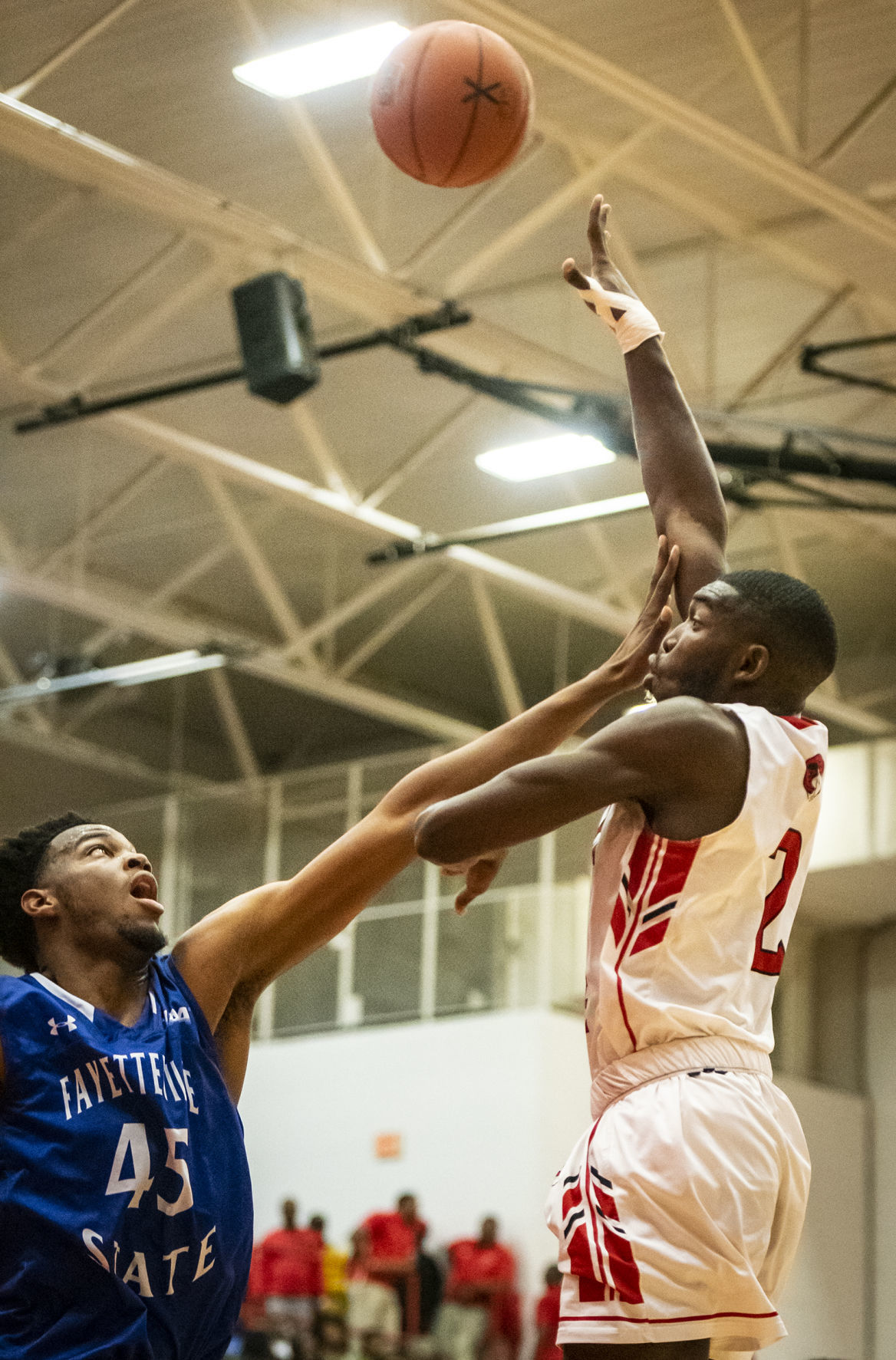 WSSU center Mason Harrell came off the bench to score 16 points, pull down 13 rebounds and block four shots to help the Rams top Fayetteville State on Saturday at the Gaines Center. 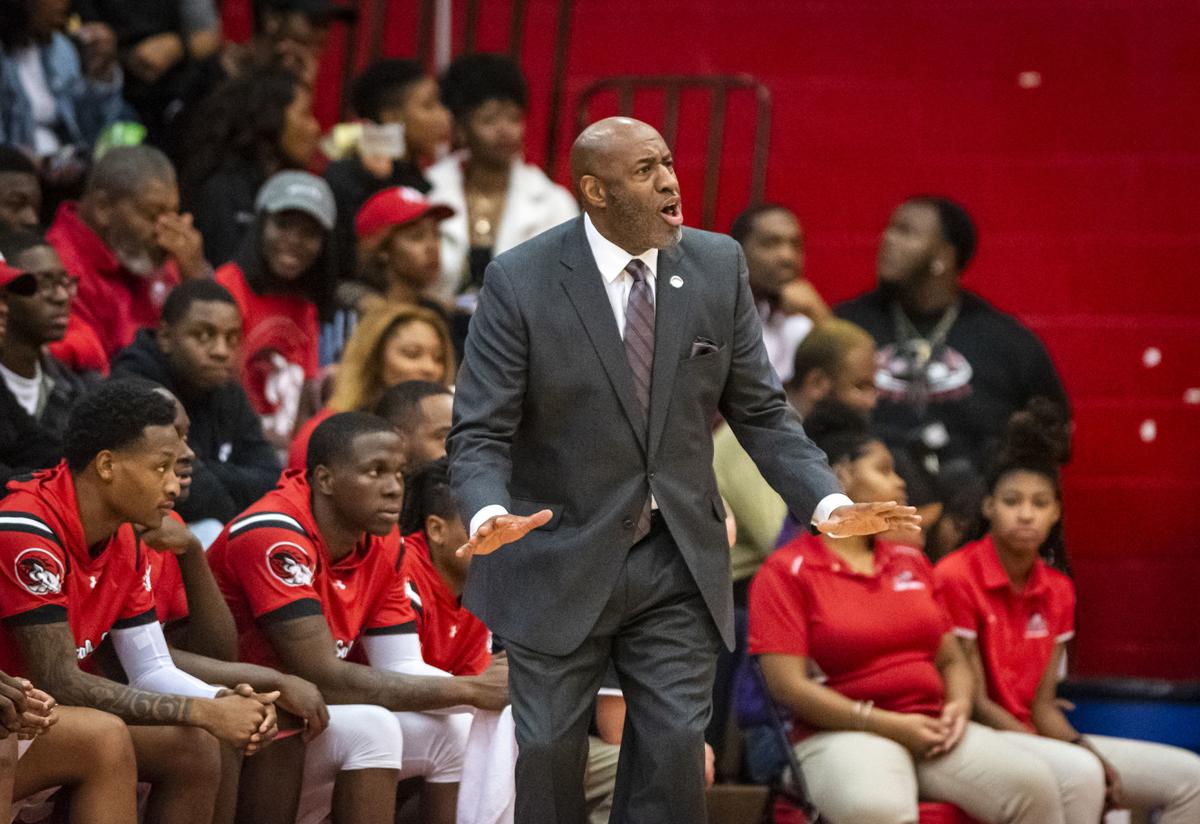 Coach Cleo Hill Jr. has the Rams at 7-2 in the CIAA Southern’s Division and in first place after Saturday’s victory.

And those Rams didn’t disappoint with a 61-54 win over Fayetteville State in front of 2,700 fans on Saturday night. There would have been a lot more students inside the Gaines Center, but the doors shut when the tiny gym reached capacity and about 200 or so were turned away.

According to a police officer working the game, the paying customers were able to get in, but the students were out of luck. There was no word if the fire marshal ever made it into the building to do a head count.

The students who didn't get in missed a Rams teams that did not back down to a very good Broncos’ team and that fed off the senior leadership of Rob Colon, Mason Harrell and Julius Barnes.

“I thought those seniors, along with Dontae (Caldwell, another senior) were huge for us,” said Coach Cleo Hill Jr., whose Rams have won three in a row in the CIAA and improved to 9-8 overall and 7-2 in CIAA play. “Rob, especially, has just been calm in his approach and his demeanor and the guys didn’t panic.”

The Rams had control most of the way and led throughout, except for a key stretch with about seven minutes to go. The Broncos took a 47-44 lead on a Denzell Hosch 3-pointer.

Undaunted, Colon had two key assists on baskets by Harrell in the final six minutes that put the Rams up for good. Colon’s passing touch for a basket for Harrell pushed the lead to 54-48 with 1:37 to go that deflated the Broncos (16-5, 5-5) and excited the home crowd.

“I tried to play off my man a little; they had a big center (Will Brown) who kept blocking my shots when I went inside. So I knew Mason would be open underneath and I just tried to get him the ball,” Colon said of his two key assists. One of them was a fundamentally sound bounce pass. “This was a big win and I thought we responded there even though they took the lead.”

Colon, who has scored more than 1,500 points in his career, scored 15 points. But his leadership has impressed Hill the most.

Coming out of halftime right before the second half, Hill gave Colon a message: “Hey Rob, you need to lead us.”

Harrell had 16 points, 13 rebounds and four blocked shots, while Jon Hicklin had 14 points, five rebounds and two assists. Hicklin was very effective at the free-throw line, going 8 of 11; he made plenty of dashes to the basket and was fouled on a lot of those drives.

After Colon’s assist to Harrell put the Rams up 54-48 with 1:37 to go, the Rams salted it away by hitting free throws in the final minute.

“It was all about defense,” Harrell said. “Everybody has to trust their brother and that’s what we did tonight.”

There is still plenty of the CIAA schedule to go, but the Rams, who were picked eighth in the CIAA preseason power poll by the coaches, are playing their best basketball of the season.

The Broncos’ leading scorer, Jalen Seegars, battled foul trouble most of the game and fouled out with six minutes to go. He scored 10 points but spent large portions of the game on the bench for Coach Luke D’Alessio.

“We started sending them to the line and didn’t defend them,” D’Alessio said. “And when their guys went to the basket we needed to take charges but didn’t. And then when Will Brown (a 6-foot-10 center) fouled out we didn’t have our rim protector.”

It’s been a long time since WSSU has been in first place in the CIAA’s Southern Division, but Hill said it’s all about continuing to work hard.

“I think the senior leadership is what will help us,” Hill said. “They are hungry for this. And I thought Friday’s practice and at (Saturday’s) shootaround they were as locked and ready as if it was a championship game. So I’m pleased with how we did tonight.”

Hill raved about the Gaines Center crowd and the advantage if gave the Rams. Colon, a four-year starter, said the atmosphere was as charged up as he’s seen it.

“We are first in the Southern and we want to stay there,” Colon said. “We want to get that No. 1 seed in the tournament so that’s what we are working for. This was one of the best atmospheres since I’ve been here and we all loved it.”

In the women’s game, Fayetteville State’s London Thompson converted a rebound into a basket with 1.3 seconds left in a 65-63 victory.

The Rams had tied the game at 63 when Melody Pritchard hit a short jumper with 12 seconds left. But Thompson came up with a rebound that saved the game for the Broncos, who are in first place in the CIAA’s Southern Division.

The Rams (9-10, 4-5 CIAA) were led by Taylor Daniels’ 19 points, and Prichard had 10 points, eight rebounds and two assists. O’Shae Hatley, pressed into action because of an injury to Brandi Segars, had 13 points and Kyree Hall added 12 points.

Coach L’Tona Lamonte said the final rebound and basket was something that happened the entire game.

“They had our number in terms of rebounding,” Lamonte said. “But I was proud of the way we fought with how many injuries we had and we had another player out today with Brandi not being able to play.”

Lamonte was surprised before the game as Debra Clark, her college coach at WSSU in the late 1990s, came into town to watch the game. Lamonte grew emotional after the game talking about what Clark did for her.

“Seeing her and her husband (John) I just reflected back on what she means to me and the opportunity she gave me at Winston-Salem State when I was a student-athlete here,” Lamonte said. “It was definitely emotional to see them… I just wish we could have pulled this one out.”

The Rams will hit the road on Monday with a women’s-men’s doubleheader at Shaw. The women’s game starts at 6 p.m. with the men’s game to follow.

Players and volunteers get ready for Arab Cup

Senior Julius Barnes (center) was a big reason why the Rams won their third straight on Saturday night.

WSSU center Mason Harrell came off the bench to score 16 points, pull down 13 rebounds and block four shots to help the Rams top Fayetteville State on Saturday at the Gaines Center.

Coach Cleo Hill Jr. has the Rams at 7-2 in the CIAA Southern’s Division and in first place after Saturday’s victory.